India’s power sector is witnessing greater adoption of renewables and smart solutions. This has made global majors look at this market with renewed interest. A case in point is French integrated electricity company Électricité De France (EDF), which has been active in India for almost 20 years and has ambitious plans to expand its presence in the country. EDF currently has operations in renewable energy with a sizeable portfolio of 371 MW across solar and wind; smart grids, engaged in providing optimisation solutions and advisory services; and transmission and distribution (T&D), working with central and state utilities for system upgradation projects, among others. It also has a presence in the nuclear power segment. It is currently in discussions with Nuclear Power Corporation of India Limited (NPCIL) for developing the 9,600 MW Jaitapur nuclear power project (NPP) in Maharashtra.

EDF plans to expand its presence in India as part of its strategy to triple its international business outside Europe by 2030. According to Vikas Ramany, senior vice- president, EDF, “India is clearly among EDF’s priority markets. It is playing a significant role in achieving one of our strategic goals of trebling our business outside Europe by 2030. Our vision is to fully support India’s energy plan with our know-how across the entire electricity value chain, which encompasses low-carbon electricity generation as well as user-oriented services that enable customers to get full control of their electricity consumption and spending.”

In India, EDF has an installed renewable energy capacity of 371 MW (207 MW solar and 164 MW wind), developed in partnership with local companies. The company’s solar power generation capacity is spread across three states – 120 MW in Rajasthan, 72 MW in Uttarakhand and 15 MW in Madhya Pradesh. The Rajasthan project, under the Jawaharlal Nehru National Solar Mission, was commissioned in 2015 in association with ACME Solar. The projects in Uttarakhand and Madhya Pradesh were commissioned in November 2017. The 72 MW project in Uttarakhand comprises two plants of 36 MW each. It is owned by a joint venture (JV) of EDEN and local partners (Omkar Powertech India Private Limited, Profigate Infra Gasoline and Rays Power Infra) in a 49:51 shareholding ratio. EDEN is equally owned by EDF Energies Nouvelles and EREN Renewable Energy. The projects have a 25-year power purchase agreement (PPA) with Uttarakhand Power Corporation Limited. Meanwhile, the 15 MW plant in Madhya Pradesh is owned by EDEN and has a PPA with Madhya Pradesh Power Management Company Limited (MPPMCL). In January 2018, the EDF Group won a tender for 100 MW of solar capacity in Gujarat with its partner SITAC Wind Management and Development. The project is currently under development.

In the wind power segment, EDF operates five wind farms in Gujarat with a total capacity of 164 MW. The wind farms were built by SITAC Wind Management and Development. It is equally owned by EDF Energies Nouvelles and the SITAC Group. Each wind farm has a 25-year PPA with Gujarat Urja Vikas Nigam Limited.

EDF has also carried out engineering studies for five hydroelectric projects – the 1,000 MW Tehri pumped storage project (PSP) in Uttarakhand, the 800 MW Koldam HEP in Himachal Pradesh, the 800 MW Turga PSP in West Bengal, the 900 MW Tidai HEP in Gujarat, and the 600 MW Malshej Ghat PSP in Maharashtra. The company has partnered with Bharat Light & Power to develop a digital platform for the maintenance and real-time monitoring of wind and solar power plants. EDF is also actively involved with the International Solar Alliance, initiated by India.

EDF is currently leading negotiations with NPCIL for building the 9,600 MW Jaitapur NPP comprising six European pressurised reactors (EPRs) in Maharashtra. Once developed, it will be the biggest nuclear project in the world. The proposed project will generate 75 TWh per year, which is enough to power 70 million Indian households based on the current energy consumption. In March 2018, NPCIL signed the industrial way forward agreement with EDF for the project. In December 2018, EDF submitted a techno-commercial offer to NPCIL which is currently under review. During the process, two parties will engage in dialogue on the convergence of the key aspects, both technical and commercial, under a binding agreement.

Ramany says, “EPRs combine all the key features – high electricity output, high availability, improved fuel efficiency, reduced waste generation – and, above all, the most advanced safety features. India has a significant experience and know-how in nuclear, which makes its nuclear ambitions reachable. With our partner NPCIL, we share the same priorities in terms of nuclear safety and the need to develop the highest level of skills in the industry. Our offer for Jaitapur is fully aligned with the Make in India strategy.”

EDF is also assisting NPCIL and the Indian government in securing funds required for the development of the Jaitapur NPP. NPCIL aims to achieve a progressive increase in participation from local companies. As per EDF, localisation could potentially reach up to 60 per cent for the last two of the six reactors, if the Indian manufacturers make the relevant investments in their facilities and processes to meet the EPR design requirements. On the cost competitiveness of power generated by the proposed Jaitapur NPP, Ramany explains that, “Our focus is to make sure that electricity generated from the Jaitapur power plant remains competitive over the decades. The prospect of being able to build six EPR units on one single site will create significant economies of scale. Given that we handle EPR projects in France, the UK and China, our experience is also a significant cost reduction factor.”

EDF specialises in providing energy optimisation solutions along with advisory services for smart city and smart grid projects. In December 2018, EDF secured a contract from Energy Efficiency Services Limited for the design, installation and integration of 5 million smart meters across India, starting with the states of Andhra Pradesh and Bihar. The contract, worth Euro 66 million, is the largest smart metering contract ever awarded in India. Under the contract, EDF is responsible for the design of data supervisory control and management systems, as well as for network operations and maintenance for a period of eight years. Ramany says, “Smart metering will improve India’s power network balance, reduce energy losses and facilitate the integration of renewable energy. For the EDF Group, this contract opens up new opportunities in India, where close to 250 million meters will be deployed in the coming years.”

Recently, EDF has collaborated with Tata Power Delhi Distribution Limited to explore prospective opportunities in the smart grid space. This JV is working towards the promotion of system digitalisation in Delhi and building of local energy communities through solar generation units and the self-consumption approach. Apart from this, EDF has engaged in several smart grid-related activities in the country. In September 2016, EDF was selected to partner with WAPCOS for the design of a smart grid comprising 75,000 smart meters for the New Delhi Municipal Corporation. In addition, the EDF Group via its subsidiary Citelum has two operations and maintenance contracts for smart street lighting – one in Ahmedabad for 160,000 lighting points and the other in Indore for 60,000 lighting points. 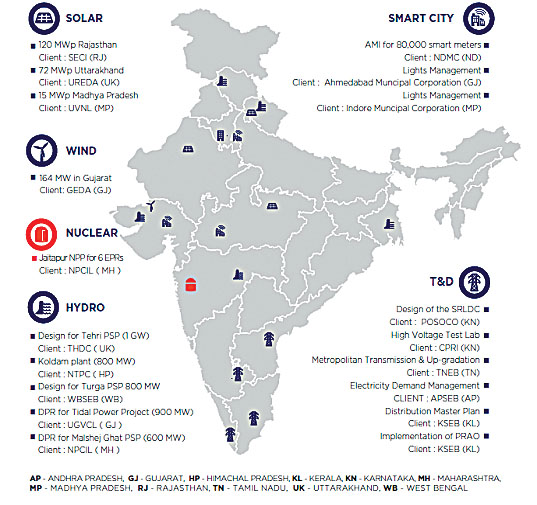 EDF has designed the Southern Regional Load Despatch Centre as part of a contract with POSOCO. The company has also provided technical consultancy services for the establishment of a high voltage test lab in the Central Power Research Institute,  Bangaluru. Further, it has undertaken projects related to transmission system upgradation in Tamil Nadu and electricity demand management in Andhra Pradesh. Currently, EDF is in discussion with MPPMCL for a project to reinforce the grid, reduce transmission and distribution losses, integrate renewable energy into the grid, and upgrade the existing supervisory control and data acquisition system.

EDF aims to be India’s leading partner in meeting the country’s energy challenges. Ramany concludes by saying, “Our added value lies in what makes us unique on a global scale, and that is our holistic approach to energy. Building sustainable, low-carbon and efficient electric systems requires coordinated action on all the key parts of the electricity value chain – generation, distribution and customer services. We intend to further strengthen our position in nuclear power, renewables, smart grids and energy efficiency services.”