Wind power capacity has been growing at a brisk pace globally over the past few years. This trend is expected to continue with increase in the demand for clean and renewable energy. In India, wind power contributed about 4.5 per cent of the total energy generation in 2018-19, and this figure is targeted to go further up.

To match the growth in demand, technology advancements worldwide and in India are focused on further increasing the size and scale of turbines to maximise energy generation in an area.

The basic technology behind wind power generation is simple. Wind energy turns the blades around a rotor, which, in turn, is connected to a shaft that spins a generator to produce power. But while the concept is simple, a wind turbine consists of a complex arrangement of various moving and stationary parts, the most complicated being the drivetrain. A drivetrain is the powerhouse of a wind turbine, as it contains the generator, gearbox and other ancillary equipment, which, in combination, are responsible for converting the blades’ rotation into electricity.

The rotor’s rotational speed does not match that of the generator, as a low speed shaft is attached to the turbine blades while a high speed shaft is attached to the generator. Thus, a transmission assembly with a gearbox is required for connecting the two shafts and converting the slow rotational speed to high speed, which spins the generator to produce electricity. This gearbox has various gears, which, in combination, convert 30-60 rotations per minute from the outer blades to 1,000-1,800 rotations per minute. In stand-alone wind power systems, direct current (DC) generators can be used for smaller systems and alternating current (AC) synchronous generators can be used for larger systems. For wind turbines connected to the grid, induction generators can be used. These produce AC current, and typically require a grid connection to maintain their frequency; they cannot operate independently without special equipment.

The drivetrain also has a number of ancillary components such as a yaw system, brakes and a control unit. The yaw system moves the rotor to align with the wind’s direction so that the turbine can capture the maximum wind and produce power at full capacity. Turbines also have a braking system to slow the machine or stop power generation completely in stormy conditions, during power overloads or system failures. Some machines have pitch control and stall control systems to reduce the lift on the blades to slow the rotation. A controller may be present in advanced machines to monitor the system, direct the yaw system to change the rotor’s direction in sync with that of the wind, and shut down turbine operations in case of a system failure.

As the demand for wind energy increases, so does the need for larger and more cost efficient equipment. In recent years, hub heights for commercially available onshore wind turbines have increased from 60 metres to 100 metres, while rotor diameters have crossed 120 metres, increasing turbine capacities to 2-3 MW.  As rotors keep becoming larger and hub heights get higher, more powerful generators and drivetrain components are needed to produce more power. However, the key issue here is that drivetrains are massive and one of the heaviest components of a wind turbine. As they are positioned on the top of a wind turbine, the supporting tower also needs to be strengthened, leading to an increase in the weight and the resulting cost of the tower. Besides, stronger and more expensive foundations need to be built. Finally, logistics costs increase significantly due to the requirements for larger cranes along with transportation complications.

The situation becomes more complicated for offshore wind turbines, which have bigger machines for capturing high wind speeds off the coast. Already offshore wind turbines of capacities as large as 12 MW are commercially available. That means more energy generation, but also larger and heavier components with significant cost implications. The costs are even higher in the case of floating offshore wind platforms in deeper waters, which require light-weight, efficient and much larger floating foundations to support the heavy components. Also, a drivetrain has a number of moving components that manage the rotation of the turbine blades and ultimately, the generator. These parts undergo a lot of wear and tear over the project’s lifetime, and the majority of failures occur within this part of the turbine, especially in the gearbox. Thus, these components require dedicated operations and maintenance to prevent costly repairs and downtime. 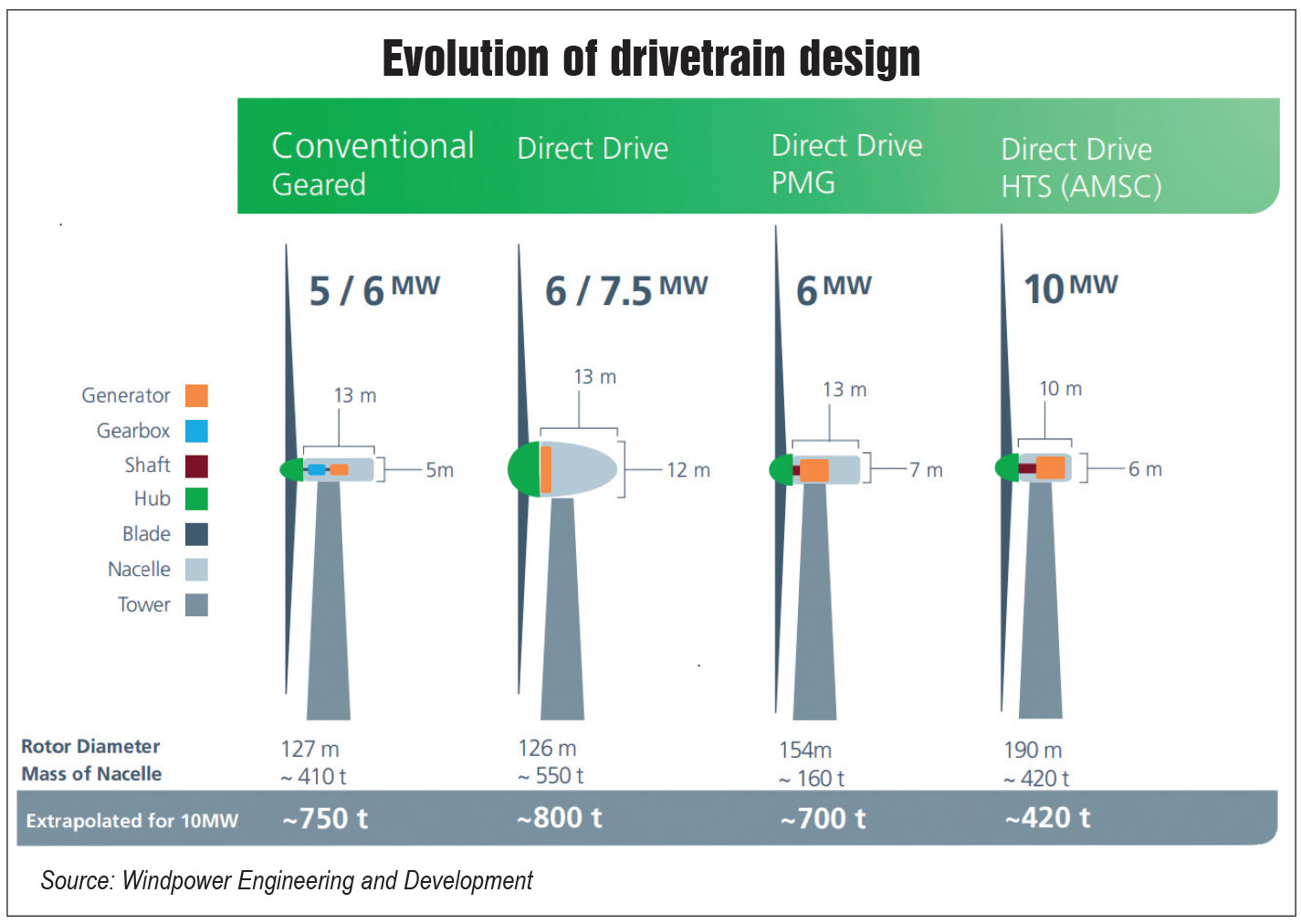 At present, efforts are focused on reducing the mass of the drivetrain components through innovative designs, and having more efficient components with fewer moving parts. Advanced manufacturing techniques are expected to produce more efficient, reliable and affordable drivetrains. These advancements include new single-stage gearboxes, permanent magnet generators, high efficiency power electronics, direct drive systems and hybrid systems. Conventional gearbox systems in wind turbines have three or more stages; each stage increases the speed of the high speed shaft attached to the generator. The newer single-stage gearbox designs have only one gearbox stage, to significantly reduce the chances of gearbox failure through the use of a fewer number of moving parts. In fact, there is a lot of research on direct drive generators, which do not require any gearbox and can generate power at much lower rotation speeds. Thus, the number of moving parts is further reduced to improve operational efficiency. In addition, many hybrid designs have evolved, which are a combination of the three-stage gearbox drivetrain and direct drive solutions with larger generators. These systems aim to have a more efficient gearbox attached to a generator of optimum size, for better dimensional balance.

Many new drivetrain designs have medium speed permanent magnet generators that utilise a smaller amount of rare earth metals used in standard generators, significantly reducing production costs. These generators also operate at a lower voltage than standard generators. Lower voltage and coils mean the usage of a less amount of copper, which further decreases the cooling system requirements. Very advanced high temperature superconducting (HTS) generators are also at early stages of development. These HTS generators will have rotor coils cooled to extremely low temperatures and are expected to have significantly lower weight than the present generators. Apart from that, high efficiency power electronics are being used in drivetrain designs with advanced materials and improved circuits for better cost efficiency and reliability. A wide variety of rotor bearing arrangements is also being explored, with highly interactive bearing designs for a more integrated system. This becomes more important as the size and scale of wind turbines increase.

With auctions driving down wind power prices on a global scale and the demand for clean energy increasing, the industry emphasis is on creating wind turbines of larger capacities at lower prices. Thus, it is necessary to develop lighter and more efficient drivetrain components, which contribute to a significant portion of the total cost of a wind turbine. Manufacturers and technology providers are focused on developing innovative designs with advanced materials for overall cost efficiency benefits, in response to the market demand. Much of the present focus is on improving the reliability and affordability of permanent magnet generators and direct drive generators and their combinations, and this is likely to remain so in the near future.