The introduction of the competitive bidding regime in the wind power segment in 2017-18 led to a slowdown in capacity installation. But with tendering activity picking up pace, the scenario is likely to improve soon. To achieve the 60 GW target by 2022, 25 GW of wind power is expected to be installed over the next three to four years. This indicates increased activity and greater competition in the wind equipment and construction segment. Besides wind turbine generators, foundations and towers are some of the critical components of a wind power plant. They withstand various loads and pressures during power generation to provide physical integrity to the plant. The foundation not only provides the base for the wind power plant, but also transmits the turbine’s dead load and wind load into the ground. Meanwhile, the tower supports the turbine and bears the incoming wind, rain erosion and other hazards. The tower also carries the weight of the turbine. These components directly impact plant performance and safety, which makes them crucial to the system.

The design of foundations has evolved gradually. Foundations could be monopile or tripod. Although this segment has not seen much innovation, there are several structural design variations that help improve performance. While a typical foundation involves setting concrete on top of steel bars, another requires embedding a steel cylinder into the foundation. This is done by placing a cylinder on top of a foundation hole, around which steel bars are placed and concrete poured. A modular precast foundation has emerged as an alternative to the traditional steel and concrete foundation. As per this design, the structure is partially precast using braces, combined with sturdy conventional foundations. According to Spain-based engineering and architecture company Esteyco, this structure increases the hub height (by 5-6 metres). Considering that India has relatively low wind speeds and a high shear, an increase of about 5 metres of hub height results in a 1-3 per cent increase in power generation. Meanwhile, it helps reduce the foundation cost by around 25 per cent by allowing nearly 40 per cent reduction in steel and concrete requirement. According to an estimate by Esteyco, this may result in capex reduction of around Rs 500,000 per MW.

One of the most common challenges of foundations is the appearance of cracks. It is possible for these cracks to appear in both visible and buried parts of the foundation and they could be radial or circumferential. While these cracks may not directly harm the wind turbine, water seepage could cause damage to the reinforcement bars. Cracks may occur due to a host of reasons including design mistakes, faulty composition of the concrete mix and extreme weather conditions.

Hub heights have increased over the years, particularly after the reassessment of India’s wind power potential to 302 GW at 100 metre hub height. Manufacturers are now moving towards modular steel, and steel and concrete hybrid towers to support the increasing hub heights and rotor diameters. The option of on-site tower manufacturing is also being explored. As per  National Renewable Energy Laboratory estimates, towers account for 17.5 per cent of the total wind turbine capital costs. 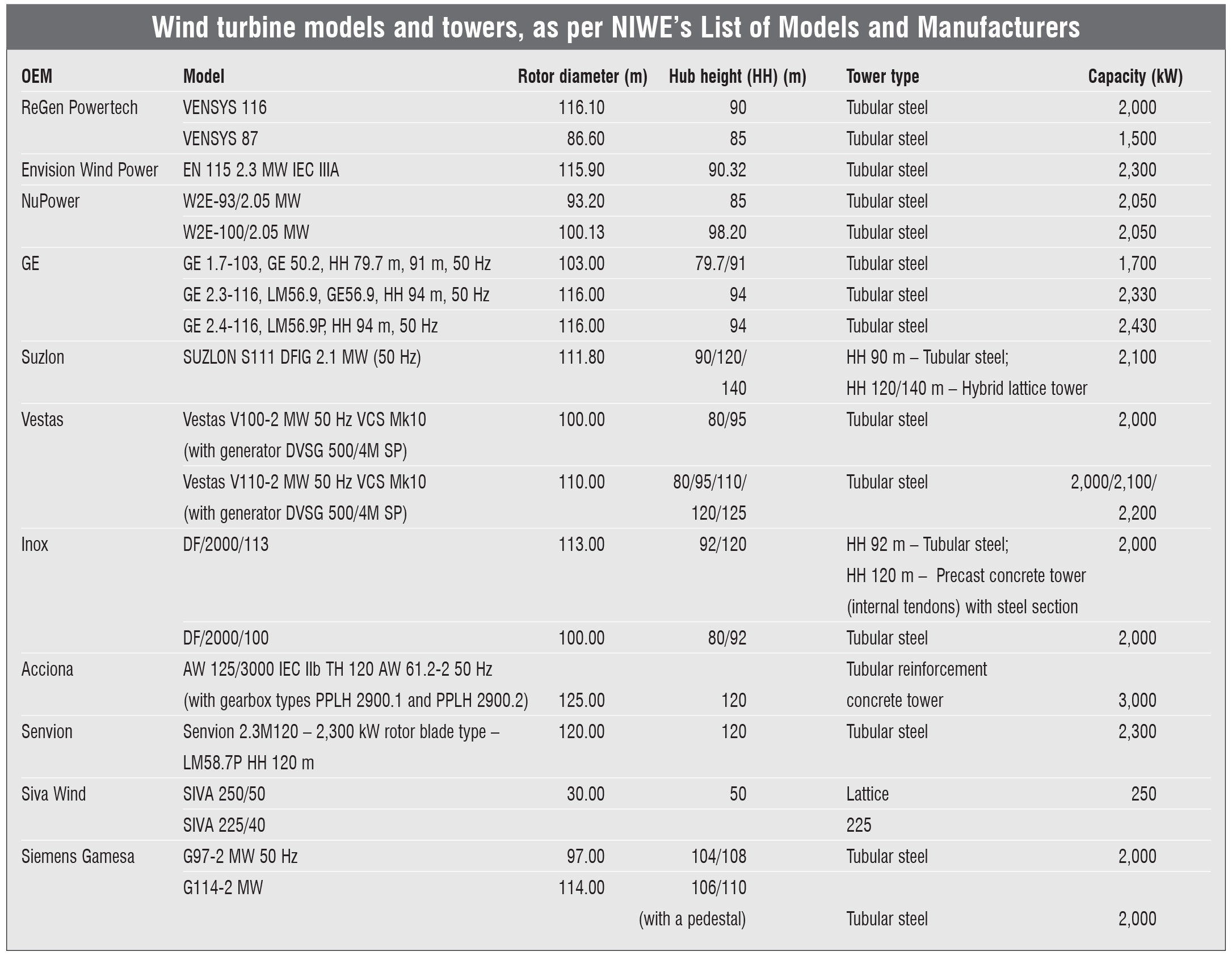 Various kinds of towers are used in the wind power segment. Most wind plants use tubular steel towers, which are conical in structure. These are manufactured in two halves and bolted together on the site. The halves are constructed from rolled steel plates and welded together. They are coated with generous quantities of weatherproof paint. Lattice towers use steel rods that are put together to form a lattice. The steel rods are easy to transport and assemble, inexpensive and robust. However, they lack any aesthetic value because of which the use of lattice towers has reduced. Concrete towers are typically used in countries where steel is expensive. Smaller precast pieces are assembled on site. The towers are unusually heavy. Guyed pole towers are also used for wind power plants. These are more economical than most other towers but require more space for using guy wires. This type of tower is typically used in smaller wind turbines. Hybrid concrete and lattice towers are also used in the industry. Such towers combine the strength of steel and concrete towers. However, these can be expensive to install.

An analysis of the National Institute of Wind Energy’s (NIWE) revised list of models and manufacturers (as of August 2018) reveals a slight increase in the heights of some wind turbine models over the previous year, while for others it has remained the same.

The role of every component of a wind power plant is critical in increasing efficiency in generation. Since towers and foundations provide structural support and integrity, their robustness becomes an important factor in the overall safety and functioning of wind power plants. Owing to the steep fall in tariffs, the developer and manufacturer margins have all but evaporated. This may result in cost cutting during construction and lax maintenance of structures, leading to inefficient operations or even shutdown of plants.

In order to overcome this challenge, it is important to implement certain standards and regulations for manufacturing. Moreover, to tackle the increasing competition in the segment, manufacturers need to focus on the quality of structures and efficiency of manufacturing processes in order to improve margins.