As the large hydropower segment (projects of above 25 MW capacity) gets government approval to be included under the purview of the renewable energy sector, the focus on the revival of the segment has returned. Saddled with stalled projects and stranded assets, the hydropower segment has felt the brunt of the growing significance of alternative fuels and falling tariffs. However, with the country’s climate change mitigation goals in place and the need to decrease dependence on coal-based generation, hydropower is poised to play an important role in load balancing to counter the intermittency of renewable energy. Central, state and private hydropower companies are expecting to gain a larger share in the country’s power mix.

SJVN Limited is a central sector PSU with a large hydropower portfolio of operational and under-construction projects. Since 2017, the central government has been keen on selling its stake (63.78 per cent) in the company to NTPC. However, the deal could not go through due to opposition from the Himachal Pradesh government, a minority stakeholder in the company (26.84 per cent). In the first week of June, the central government reportedly decided to put the NTPC-SJVN merger back on track. With a disinvestment target of Rs 900 billion, it is eager to divest its stake in several entities. According to various reports, the government’s stake in SJVN is currently valued at Rs 60 billion-Rs 70 billion. There is also talk about a major PSU restructuring, which may extend the NTPC-SJVN merger into a three-way deal that includes NHPC as well.

SJVN was incorporated in May 1988, with the central government as the majority stakeholder. The minority stakes rest with the Himachal Pradesh government and the public (9.38 per cent).

The company has four under-construction power plants with a total capacity of 1,572 MW. Another 1,848 MW across four projects is at the pre-construction and investment approval stages along with a 217 km, 400 kV DC transmission system associated with the Arun 3 hydropower plant. Also, about 598 MW of capacity across three projects is currently under investigation.

The company has formed two subsidiaries for the implementation of its generation projects. SJVN Arun 3 Power Development Company Private Limited is a fully owned subsidiary incorporated in Nepal to execute the development of the Arun 3 hydropower project. SJVN Thermal Private Limited is also a fully owned subsidiary formed to develop the 1,320 MW Buxar thermal power project, for which the foundation stone was laid on March 10, 2019.

In addition, SJVN has formed two joint ventures (JVs): Cross-Border Power Transmission Company Limited (CPTC) and Kholongchhu Hydro Energy Limited. CPTC is a four-way JV of SJVN (26 per cent), Power Grid Corporation of India Limited (26 per cent), IL&FS Energy Development Company Limited (38 per cent) and the Nepal Electricity Authority (10 per cent). It was formed to construct and maintain a 86 km long, 400 kV DC transmission line from Muzaffarpur to Sursand and a bay extension at Muzaffarpur substation. The  Kholongchhu Hydro Energy Limited JV was formed with Bhutan-based Druk Green Power Corporation Limited as the 50 per cent partner, to execute the Kholongchhu hydropower project. 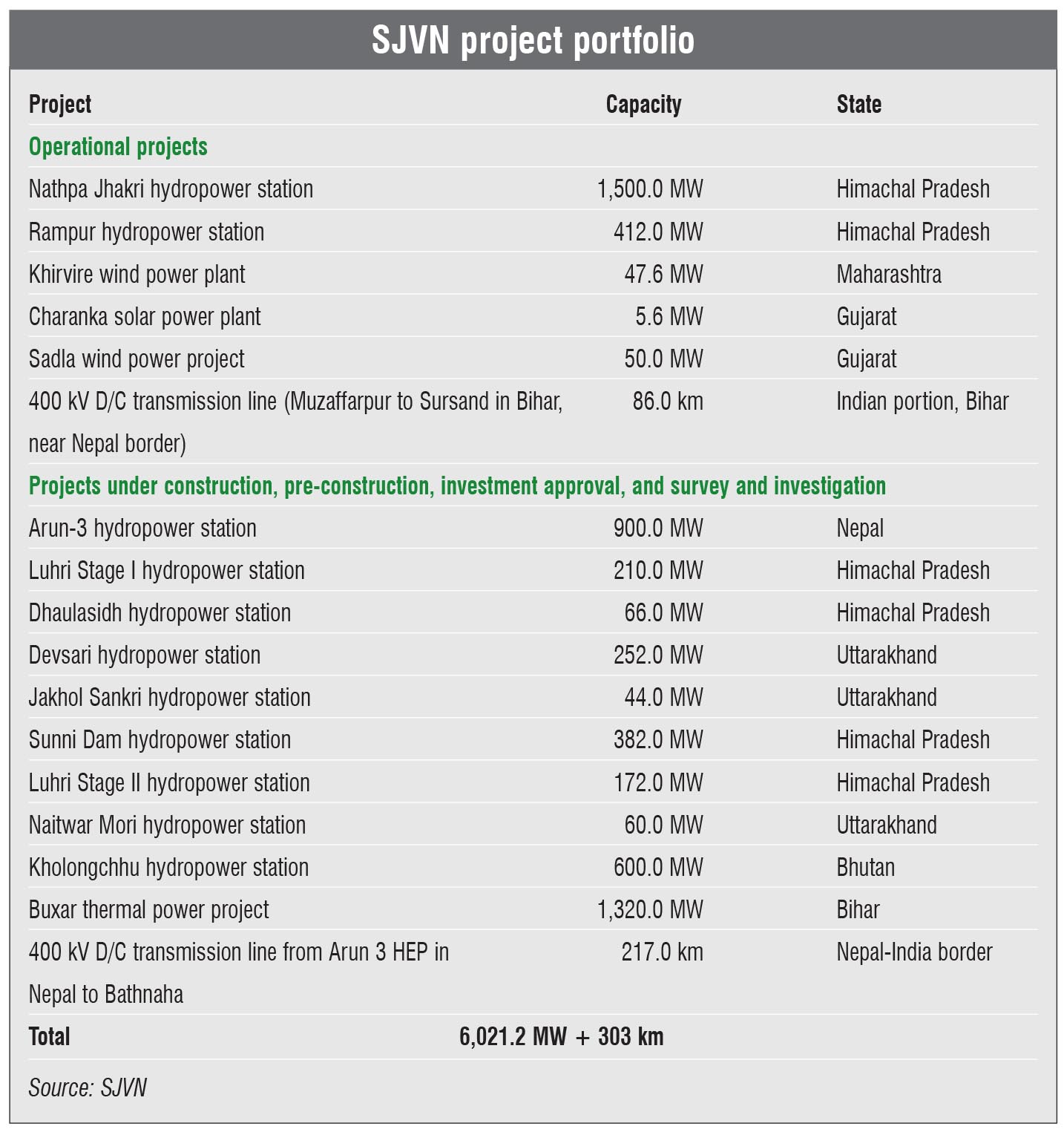 The company generated 9,280 MUs in 2017-18 as compared to 9,045 MUs in 2016-17. It has considerable experience in the development and operations of large hydropower projects, from concept to commissioning. It also has in-house capability for complete design, development and project management for large-scale hydropower plants. SJVN has long-term power purchase agreements with state electricity boards and distribution licensees.

However, the time and cost overruns inunder-construction projects and high tariffs pose a threat to the future of hydropower companies. The issues and challenges that exist in the hydropower segment apply to SJVN as well. These include difficult terrain, geological surprises while developing projects, long gestation periods including time taken for various approvals and increased cost of land leading to high project costs. Meanwhile, the fact that both the Nathpa Jhakri and Rampur hydropower stations are cascade schemes and operate in tandem is a threat to the company’s revenues. Any issues faced in the operation of Nathpa Jhakri have direct consequences on the operation of the Rampur power plant, leading to a loss of revenue. 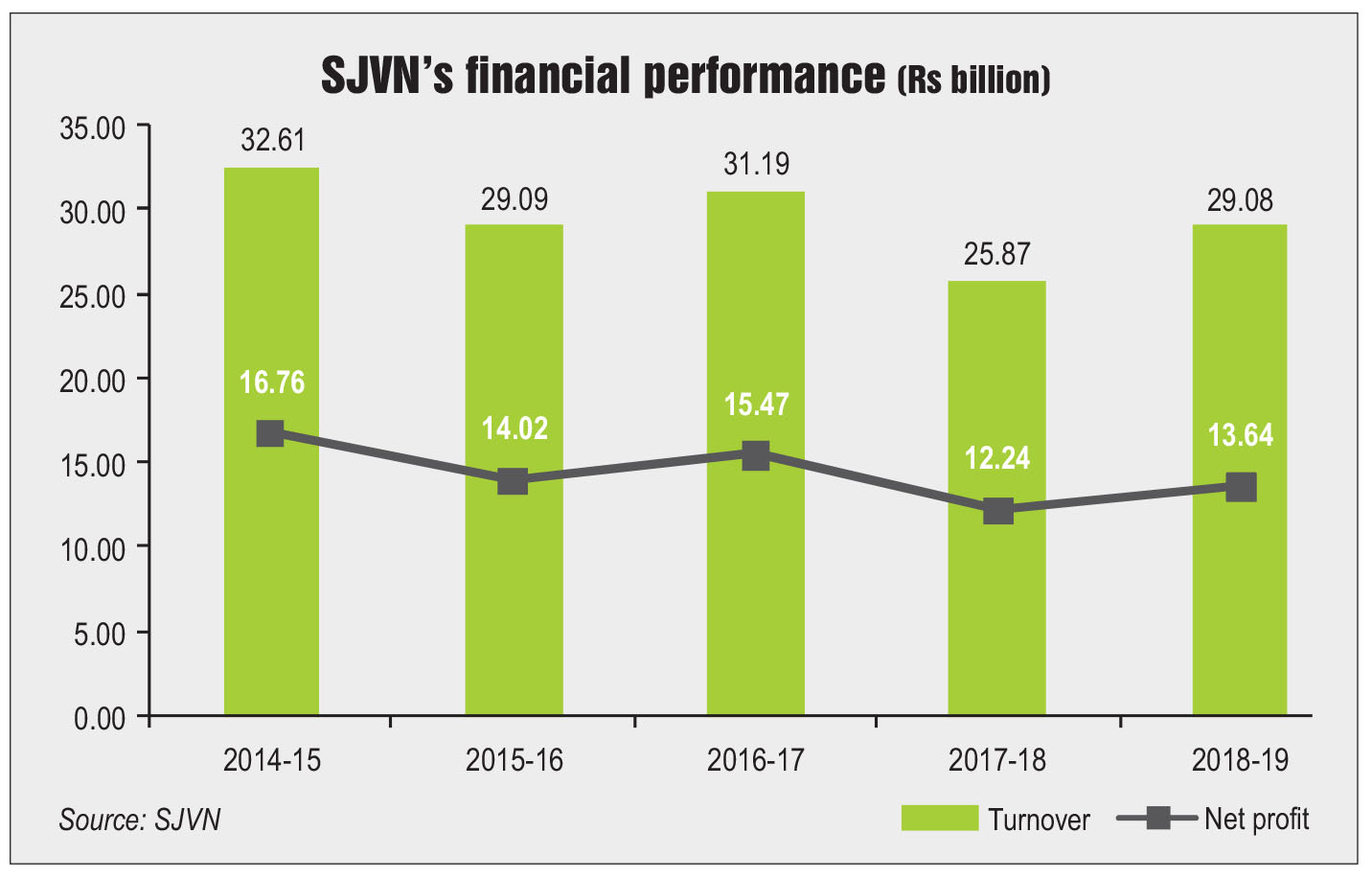 Talks about the SJVN-NTPC merger have resurfaced now. The plan is part of the government’s restructuring of PSUs, which also includes the bifurcation of GAIL into two divisions – marketing and transportation. The fact that SJVN has hydro projects is a plus for NTPC, which is looking to diversify its portfolio by adding non-coal power generation capacity. For SJVN, the merger would essentially mean getting into an arrangement where it will function like any of the other NTPC JVs. Given the capacity in operation and at various stages of construction, SJVN boasts of a strong asset base on its balance sheet. The company aims to increase its portfolio to 5,000 MW by 2023, 12,000 MW by 2030 and 25,000 MW by 2040.

It will be interesting to see how the company performs in light of the impending changes in the hydropower segment as well as  the company’s shareholding pattern, if the merger comes through.