Hinduja Renewables Energy Private Limited (HREPL), a subsidiary of the Mumbai-based Hinduja Group, is an independent power producer (IPP) in the solar power segment. It started its operations in the solar IPP space in 2016. The company is looking at both acquisitions and greenfield project development as part of its growth strategy. The company currently operates a portfolio of 125 MW, including 110 MW of utility-scale ground-mounted solar plants and 10 MW of rooftop solar projects.

HREPL has acquired the entire project portfolios of Kiran Energy and Fonroche Energy in a short span of time. It acquired Fonroche Energy’s solar projects aggregating 25 MW in 2017, and then bought Kiran Energy’s solar power portfolio of 90 MW in 2018. These acquisitions form more than 90 per cent of HREPL’s total operational solar power capacity. Since these projects are operational, HREPL now has a strong base to expand its solar power capacity. HREPL’s oldest project was installed in 2011 as part of the Jawaharlal Nehru National Solar Mission. The company’s operational projects are spread across various states in the country. Thus, HREPL has a wide range of projects, in terms of location and commissioning date. The company aims to increase its operational project capacity to 300 MW by March 2020. Around 75 MW of solar power capacity is being developed in Tamil Nadu and 5 MW in Gujarat.

The majority of HREPL’s projects have been implemented in open access and group captive modes. These projects cater to discoms as well as commercial and industrial (C&I) consumers. In the rooftop solar segment, the company operates as a renewable energy service company (RESCO) for many of its corporate clients. It has set up several rooftop solar projects in net metering and behind-the-meter modes. The company has not yet bid in any central or state tenders. Although most of its projects are operating in open access mode, HREPL signs long-term power purchase agreements (PPAs) with its clients instead of the more prevalent 10-year contracts. It convinces its clients to opt for a long-term PPA so that the off-takers get lower solar power tariffs.

HREPL outsources engineering, procurement and construction (EPC), and operations and maintenance (O&M) to third-party specialised vendors. The company has an in-house preliminary design team that conducts quality checks on EPC contractors. It also delegates one of its own team members at each of the project sites to ensure proper O&M of its assets. For these reasons, HREPL’s plants are performing as per expectations in terms of output, robustness and statutory compliances. The company’s utility-scale plants reportedly have an average capacity utilisation factor of 20 per cent, which has gone up to 23 per cent for one of its tracker-based plant.

Like most of the IPPs in the solar power space, HREPL aims to expand its project portfolio through both organic and inorganic routes. It plans to continue acquiring high performing assets following a strict due diligence process, and developing new greenfield projects. In addition, HREPL aims to reach a gigawatt-plus solar power portfolio in a short span of time. To this end, it is planning to build a 100 MW ground-mounted solar project in Tamil Nadu in 2019-20. The company has been carefully watching industry developments to accordingly set out a path for steady capacity additions in the C&I solar segment. It is planning to develop rooftop projects in RESCO mode and ground-mounted projects in open access mode. Apart from signing bilateral power sale agreements, the company is keen on bidding for projects under Solar Energy Corporation of India (SECI) and NTPC Limited tenders. HREPL also plans on doing its own EPC and O&M once it has established a large enough project capacity to sustain these additional divisions and has acquired experience in these activities. 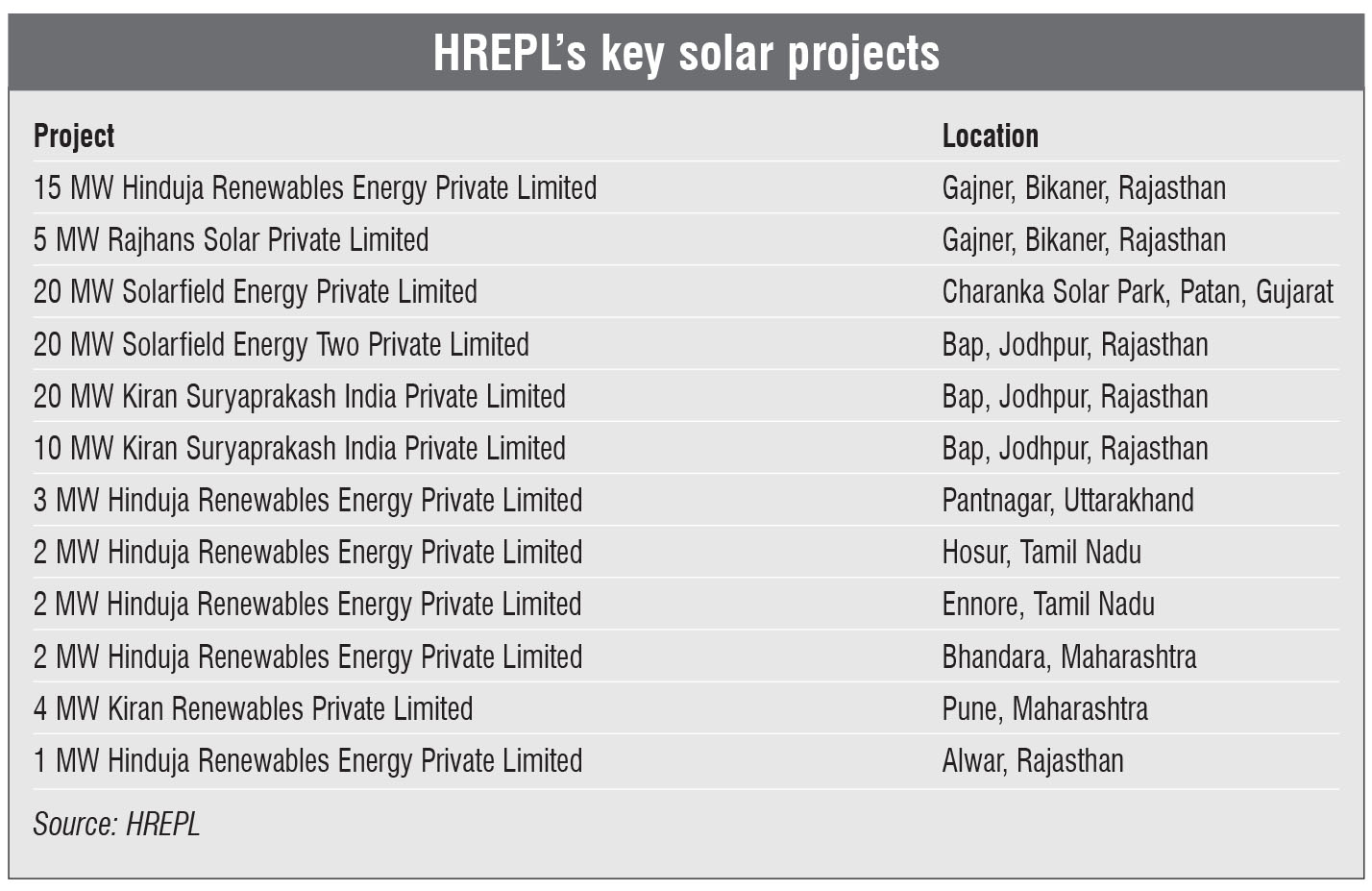 Despite its diverse range of high quality projects, HREPL faces challenges owing to its late entry into the solar power segment, which is already saturated with large IPPs. Many of its competitors have already built portfolios of over a gigawatt and are rapidly adding more capacity. In contrast, HREPL has only 125 MW of solar power capacity largely developed in open access mode. It has no experience in implementing large projects under the SECI framework. This can prove to be a challenge if the company shifts to competitive bidding under government tenders, and restrict its future growth trajectory. Meanwhile, implementing open access projects might get difficult in the future due to discom reluctance and regulatory restrictions. This could further limit the company’s expected project pipeline. To tackle these issues, HREPL is open to diversifying and exploring other renewable energy sources. It is looking to develop energy storage systems in conjunction with solar power plants, and hybrid plants using solar along with any other renewable energy source. Financing is not a challenge for HREPL as it is wholly backed by a deep-pocketed business group and has a Rs 1 billion credit line from the State Bank of India for rooftop solar power projects.

In sum, HREPL has adopted a measured and conservative approach to expanding its project portfolio. It is slowly developing good quality assets that will generate sustainable returns throughout the project life cycle, and strengthen its position in the solar power business for the long term. 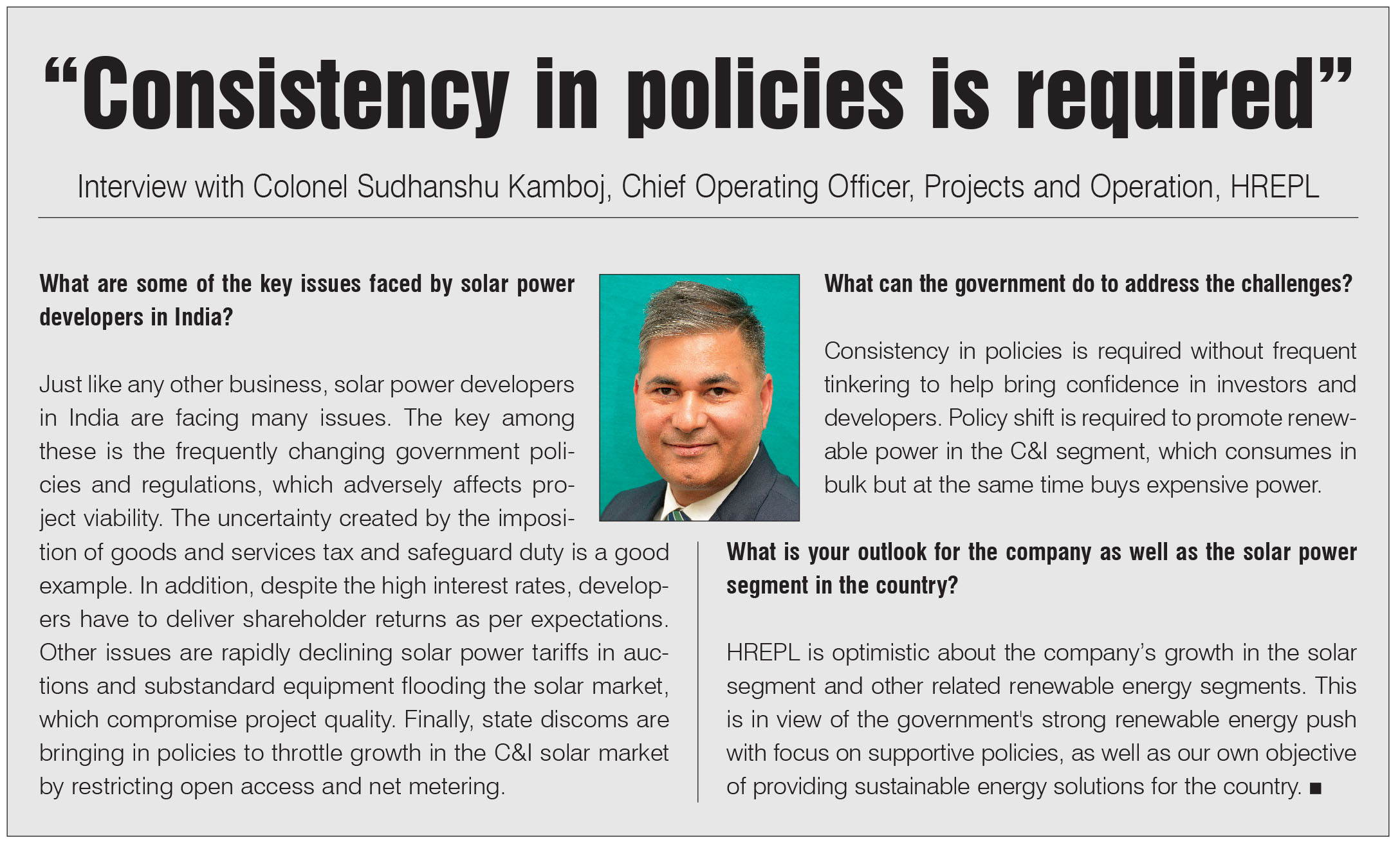