Led by massive auctions and enabling policies, renewable energy has already become the cheapest source of electricity in many parts of the world. In India, for instance, owing to the cost competitiveness of solar and wind power over conventional energy sources, renewables surpassed thermal power in terms of new capacity addition in 2017 and 2018. Investors and developers worldwide are focused on strengthening their renewable power portfolios, with manufacturers expanding their sales volumes to meet the growing demand, thus further driving down the cost of renewable power.

A comprehensive report, “Renewable Power Generation Costs in 2018”, by the International Renewable Energy Agency (IRENA) highlights the latest cost trends for each of the key renewable power technologies. The IRENA report, released in May 2019, draws on its cost database of about 17,000 renewable power generation projects and 9,000 auctions and power purchase agreements (PPAs) for renewable power. Along with reviewing cost trends, the report analyses the cost components of renewable energy projects in detail. Renewable Watch highlights the key findings of the IRENA report…

IRENA reports that globally costs from all commercially available renewable power generation technologies have declined in 2018. Data shows that the cost of electricity from bioenergy, hydropower, geothermal, onshore and offshore wind was within the range of fossil fuel-fired power generation costs between 2010 and 2018. Since 2014, the cost of solar photovoltaic (PV) power has also fallen into the fossil fuel cost range. In fact, individual bioenergy, hydropower, onshore wind and solar PV projects now commonly undercut fossil fuel-fired power generation, even without financial assistance.

In 2018, the global weighted average levellised cost of energy (LCoE) from newly commissioned bioenergy, geothermal and hydropower facilities amounted to $0.062 per kWh, $0.072 per kWh and $0.047 per kWh respectively. This translates to a decline of 14 per cent, 1 per cent and 12 per cent from the LCoE estimates for bioenergy, geothermal and hydropower, respectively, in 2017. Data suggests that the bulk of the deployed hydropower capacity between 2010 and 2018 cost less than the cheapest fossil fuel alternative.

Likewise, the LCoE of the newly commissioned onshore wind projects in 2018 was $0.056 per kWh, with a significant number of projects having costs lower than fossil fuel-fired projects. This is 13 per cent lower than the LCoE value for 2017. It reflects both falling turbine and balance of project costs, and improving performance as higher hub heights and larger swept areas harvest more electricity from a given resource. Similarly, the utility-scale solar PV projects commissioned in 2018 had a global weighted average LCoE of $0.085 per kWh, which was around 13 per cent lower than that in 2017. The LCoE of utility-scale solar PV fell by 77 per cent between 2010 and 2018, driven by the decline in both  module prices and balance of system costs.

In line with global trends, renewable energy has become increasingly competitive to meet the new power generation needs in India as well. In fact, the country witnessed 9 GW of new solar PV capacity addition in 2018, with the lowest estimated total installation costs seen worldwide. The new utility-scale solar PV projects set up here in 2018 were commissioned at $793 per kW, which is 27 per cent lower than the cost in 2017 and $417 per kW lower than the global average in 2018. India also witnessed the lowest solar power LCoE at $0.063 per kWh, a decline of 21 per cent from 2017, enabled by government support and aggressive bids in auctions.

Likewise, the country has a low LCoE for hydropower and bioenergy as well, as it is a major market for these power sources. In the bioenergy segment, the country has a massive installed base of bagasse-based cogeneration power plants, which lowers the average LCoE and the total installation cost due to economies of scale. Deviating from the LCoE trends of other sources, India experienced a slight increase in the LCoE of onshore wind power projects commissioned in 2018 over that in 2017. The country witnessed 2.4 GW of new onshore wind capacity addition in 2018 at a weighted average LCoE of $0.062 per kWh. This is about $0.005 per kWh higher than the LCoE in 2017, and also slightly higher than the global average of 2018. The rise in LCoE in 2018 can be attributed to a weakness in the country’s currency and a lower estimated lifetime capacity factor for projects commissioned during the year. Despite that, India has one of the lowest average onshore wind total installation costs of $1,200 per kW in the world.

Data from IRENA’s cost database shows that by 2020-22, all the existing available renewable power generation options will compete head-to-head with conventional sources. Cost forecasts for solar PV and onshore wind continue to be revised as new data emerges, with renewables consistently beating the earlier expectations. For instance, at the beginning of 2018-19, IRENA’s analysis of auction and PPA data suggested that the global weighted average cost of electricity could fall to $0.049 per kWh for onshore wind and $0.055 per kWh for solar PV in 2020. A year later, the potential value of onshore wind in 2020 seems to be dropping by a further 8 per cent, to $0.045 per kWh, while that of solar PV shows a decline by 13 per cent, to $0.048 per kWh.

Within IRENA’s global database, over three-quarters of the onshore wind and four-fifths of the utility-scale solar PV project capacity due to be commissioned in 2020 should provide lower-priced electricity than the cheapest new coal-fired, oil or natural gas options, as the report notes. Going forward, new solar PV and onshore wind are expected to increasingly cost less than the marginal operating cost of the existing coal-fired power plants. In addition, the prices of other technologies will decline so that by 2020, offshore wind and concentrating solar power (CSP) will offer electricity in the $0.06-$0.10 per kWh range. Thus, these cost-competitive renewable power sources have the potential to become the backbone of the global power scenario, along with a key low-cost decarbonisation solution in support of the climate goals set out in the Paris Agreement. 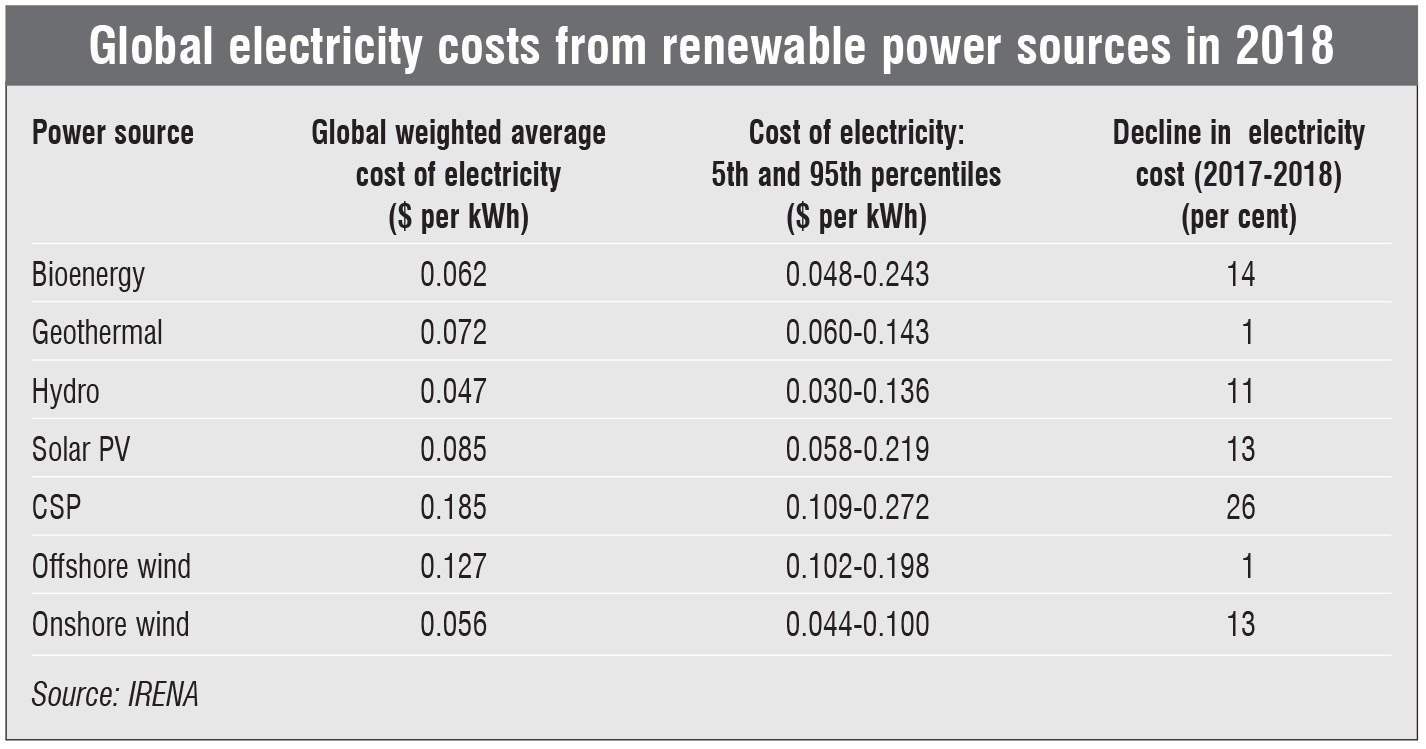 With renewable power prices set to fall further, enabled by a growing demand and economies of scale, the cost advantage of renewables will strengthen the business case and solidify the role of renewables as the engine of the global energy transformation. Besides making the decarbonisation of the electricity sector economically attractive, the declining cost of renewable energy unlocks low-cost decarbonisation of end-use sectors like industry, transport and buildings. This is made possible by greater renewable energy adoption for powering electric vehicles and heat pumps.

However, as the share of variable renewables increases, the importance of looking beyond the generation cost to the total system cost becomes more important. Integration costs could be minimal if a systemic approach to the power system transformation is applied, but could rise if opportunities for flexibility options are confined only to the electricity sector. This becomes more important in a price-sensitive market like India, which needs to adopt a combination of renewable power, energy storage and electric vehicles to cater to its increasing power demand in a sustainable manner. While auctions continue to drive down solar and wind power costs in the country, holistic and quality development of these projects with optimum balancing systems is of utmost importance to ensure robust systems for the future. 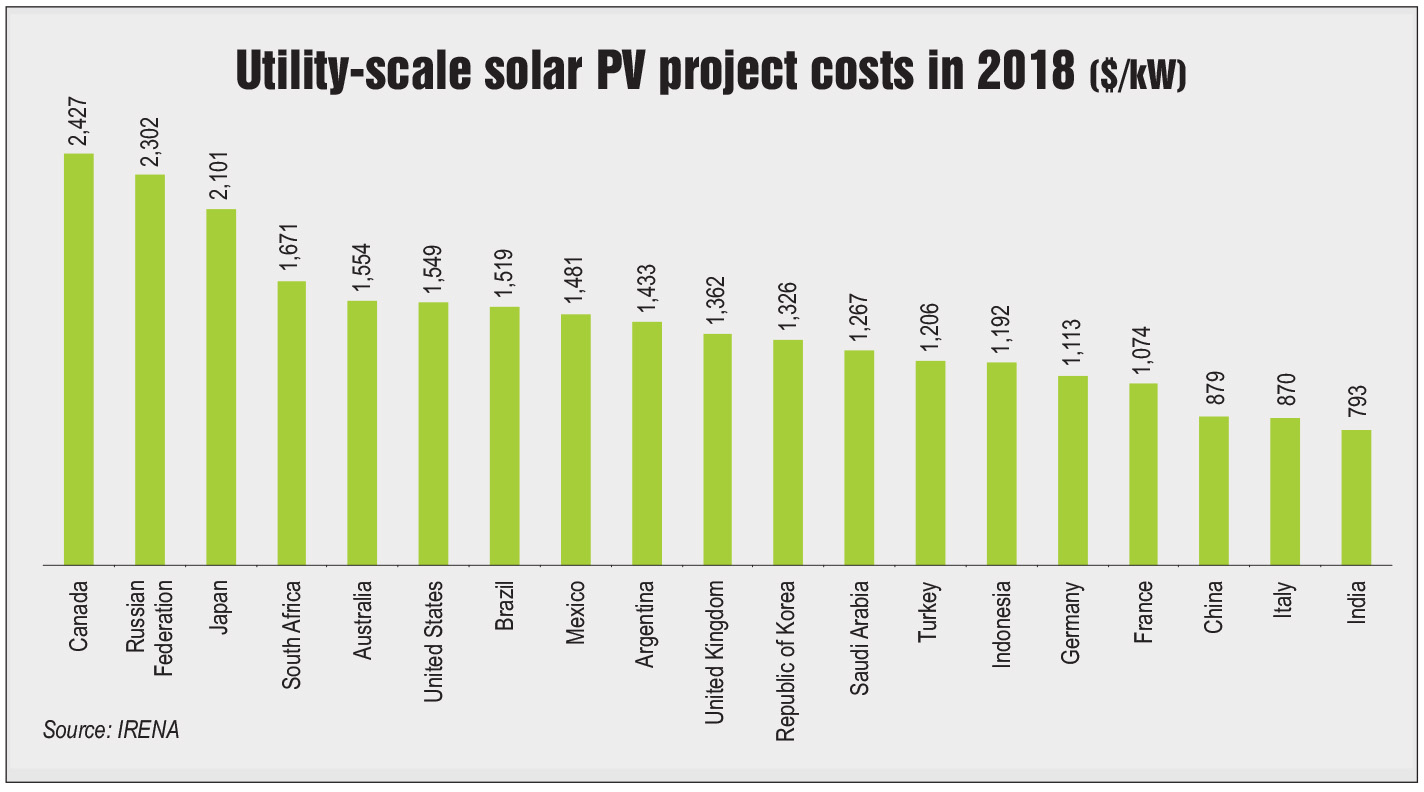 To sum up, if implemented in a systematic manner, renewable power sources can greatly impact the global future energy usage. To this end, IRENA sees an increase in global electrification for a sustainable energy sector, with the world’s share of electricity growing from less than  one-fifth of the final energy demand to nearly half in 2050, on the back of cost-competitive renewables.

Based on the report, “Renewable Power Generation Costs in 2018” released by IRENA in May 2019