Mumbai-based Artha Energy Resources (AER) is an energy advisory and investment firm. The company has a large renewable asset database, which it leverages for its various advisory services. Over a span of five years it has developed an engineering and project development division that manages its assets. The company aims to become a key enabler for the renewable energy sector connecting investors, developers, consumers and the government.

Having started operations in 2013, AER’s initial investment in the Indian renewable energy sector involved purchasing a wind turbine in Rajasthan. Six years down the line, AER has done over $160 million or 250 MW worth of M&A deals in the Southeast Asian and Indian renewable energy markets till now. Out of this, wind and solar power have a share of 50 per cent and 20 per cent respectively, while the biomass and hydropower segments have a share of 15 per cent each. The company has also constructed over 30 MW of greenfield solar projects through its engineering division. 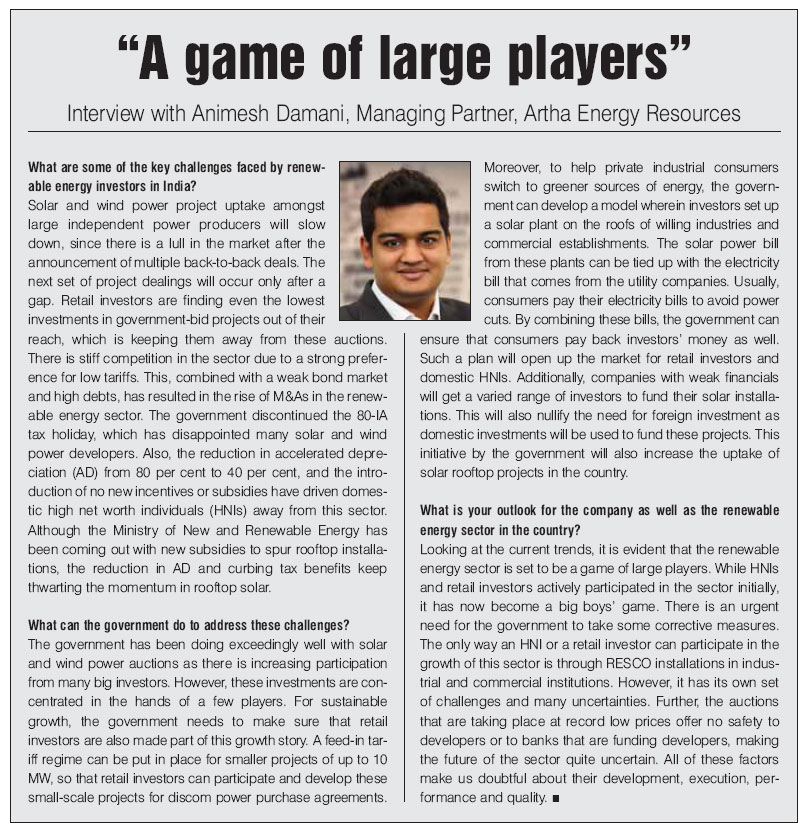 Initially, AER’s plan was getting on board the green energy wave with large investments. This made the company enter the renewable energy sector as an investor. The challenges of being an investor in this sector made it realise the non-sustainability of this business model. The company then decided to do something different to stand out in the market and it began developing a database through AER’s technology and research division. The objective of this database is to track the performance of individual renewable power assets in the country. Over the past two years, the company has created a huge database, which comprises data on 90 per cent of the total installed renewable energy assets in India and over 100 GW of power consumers of the country. It feeds information for the investment banking and solar engineering divisions, as well as provides solutions for AER’s transactions in the secondary market. The database also helps in the company’s advisory business by providing solutions for large electricity consumers on how they can reduce their electricity bills.

AER is launching its first fund of Rs 250 million to support the development of projects in the first phase over the next 12 months. This includes about 15 MW of rooftop solar under the RESCO model. For the second phase of projects, it is planning to establish an alternate investment fund of Rs 1,500 million, to be utilised over the subsequent two to three years. Thereafter, it will establish an InvIT fund with over Rs 5,000 million to finance future projects.

With low tariffs and lack of payment security, solar and wind power projects have become risky investments. On top of that, small domestic renewable energy  investors are facing stiff competition from    global players. They do not have the capacity to invest in large government-auctioned projects, and have to opt for open access projects. But even the open access segment is witnessing regulatory constraints, which limit the renewable energy market for small domestic investors. To deal with these risks, AER plans to have a more diverse scale of operations. It will continue investing in renewable energy projects. It will simultaneously leverage its database of power generators and consumers to connect buyers and sellers, once open access is made more convenient and feasible in the country. Apart from monetising this database, the company is building an on-demand asset management system that is entirely automated. This automatic asset management system is aimed at helping asset owners in efficient operations and maintenance of their assets by reducing breakdowns through preventive maintenance as well as to maximise the energy yield from the project.

In conclusion, AER is headed in the right direction by developing a multidimensional expertise encompassing investments, advisory, asset management, project development and engineering services in this age of stiff competition. It will be interesting to see how this company achieves all this in the highly saturated renewable energy market, with no dearth of players offering specialised services at competitive rates.