Once dismissed as a quirky, niche segment likely to be relegated largely to land-scarce countries like Japan, the concept of floating, canal-top and canal-bank solar PV projects now seems poised for a potential breakthrough in India.

The concept of floating solar plants was first mooted in India by Tata Power in 2011 when it set up a pilot-scale project based on Australian company Sunengy’s liquid solar array technology on the backwaters of a dam located close to a Tata hydroelectric plant. But the concept really caught the fancy of power developers only after the Kerala State Electricity Board (KSEB) commissioned a floating solar plant on the Banasura Sagar reservoir in Wayanad in January 2016. The 10 kW floating plant was soon scaled up to 500 kW, which was commissioned in December 2017. The Rs 92.5 million solar plant floats on 1.25 acres of water surface in the Banasura Sagar reservoir. It comprises 1,938 solar panels installed on 18 ferro cement floaters with hollow insides, a 500 kVA transformer, 17 inverters, a supervisory control and data acquisition (SCADA) system to control and monitor power generation and an anchoring system. A floating substation has also been set up on the reservoir itself to convert the output to 11 kV, considering economic and safety aspects.

Following the successful installation and commissioning of this plant, several Indian companies such as the JSW Group, discoms such as the West Bengal Power Development Corporation Limited and central agency Solar Energy Corporation of India (SECI) have announced new pilots, projects and pipelines in this space. SECI has announced its plans to tender about 10 GW of floating solar capacity. However, it is still early days for floating solar in the country, given the lack of technical experience and high implementation costs. Therefore, the question of how much capacity SECI eventually auctions off will hinge on the success of the experiments that are under way, the future cost trajectory of these projects, as well as the way floating PV technology develops elsewhere in the world. Meanwhile, canal-based projects have overcome the technological hurdles and are now struggling only with the challenges pertaining to their impact on the environment and high costs compared to other ground-mounted projects. Currently, about 100 MW of solar installations atop and alongside canals have either been approved or are under construction in eight Indian states.

A look at the key developments in the floating and canal-based solar segments, the potential opportunities and emerging challenges…

In India, there are two main markets for floating PV. The first is of utility-scale tenders floated by discoms and various government agencies. During the past few months, the government has invited interest for as many as eight floating solar power projects, for capacities ranging from 2 MW to 1,000 MW. The process of shortlisting potential implementers of these solar power projects is still under way.

Key among these are SECI’s tender for 150 MW of grid-connected floating solar power projects (50 MW each) to be set up at Rihand Dam (also known as Govind Ballabh Pant Sagar Reservoir), located in Sonbhadra district of Uttar Pradesh; and NTPC Limited’s tender for the development of 70 MW of floating solar PV projects at the Rajiv Gandhi Combined Cycle Power Project at Kayamkulam, Kerala.

The largest of the proposals so far has been the expression of interest (EoI) invited by Maharashtra State Electricity Distribution Company Limited (MSEDCL) for developing 1,000 MW of floating solar PV projects. The state government is considering three dams — Irai, Bhatsa and Dhamni — for the project. A private solar energy firm, Gensol Consultants, had been asked to conduct the feasibility study for Irai but the reports have reportedly not been very favourable. A ballpark calculation had estimated that 250 MW of floating solar panels could be set up at the dam. Another problem with Irai Dam is that a 10-15 km long power evacuation system will have to be set up to transmit the power from the plant to the grid. Moreover, Mahagenco is now developing two other solar plants in Chandrapur district with a total capacity of 245 MW. Given the limited evacuation capacity, MSEDCL would now prefer to shift the location to another district. However, the cost of floating solar PV will still remain a hurdle in MSEDCL approving the final tender.

The second significant market is that of captive projects, since India has many conglomerates in the steel and thermal power industries, for instance, that have plants alongside huge water bodies and reservoirs. Grid power for these companies costs Rs 6-Rs 9 per kWh, whereas floating solar can offer power at less than Rs 5 per kWh.

Sensing a large untapped opportunity in this space, several international players have already forayed into the Indian floating solar power segment. A French floating solar specialist, Ciel et Terre International, has set up a subsidiary, Ciel & Terre India, to offer its latest Hydrelio solution and tap the floating solar opportunity in the country. As part of its expansion plans in India, the company has partnered with a local blow moulder in Aurangabad, Maharashtra to set up a 50 MW floating solar manufacturing unit. International Coil Limited has won the engineering procurement construction (EPC) contract for this project. Its manufacturing unit will first deliver floats to a 5 MW project on a raw water pond at the Sagardighi Thermal Power Project located in Murshidabad, West Bengal. The project has already been tendered and awarded. 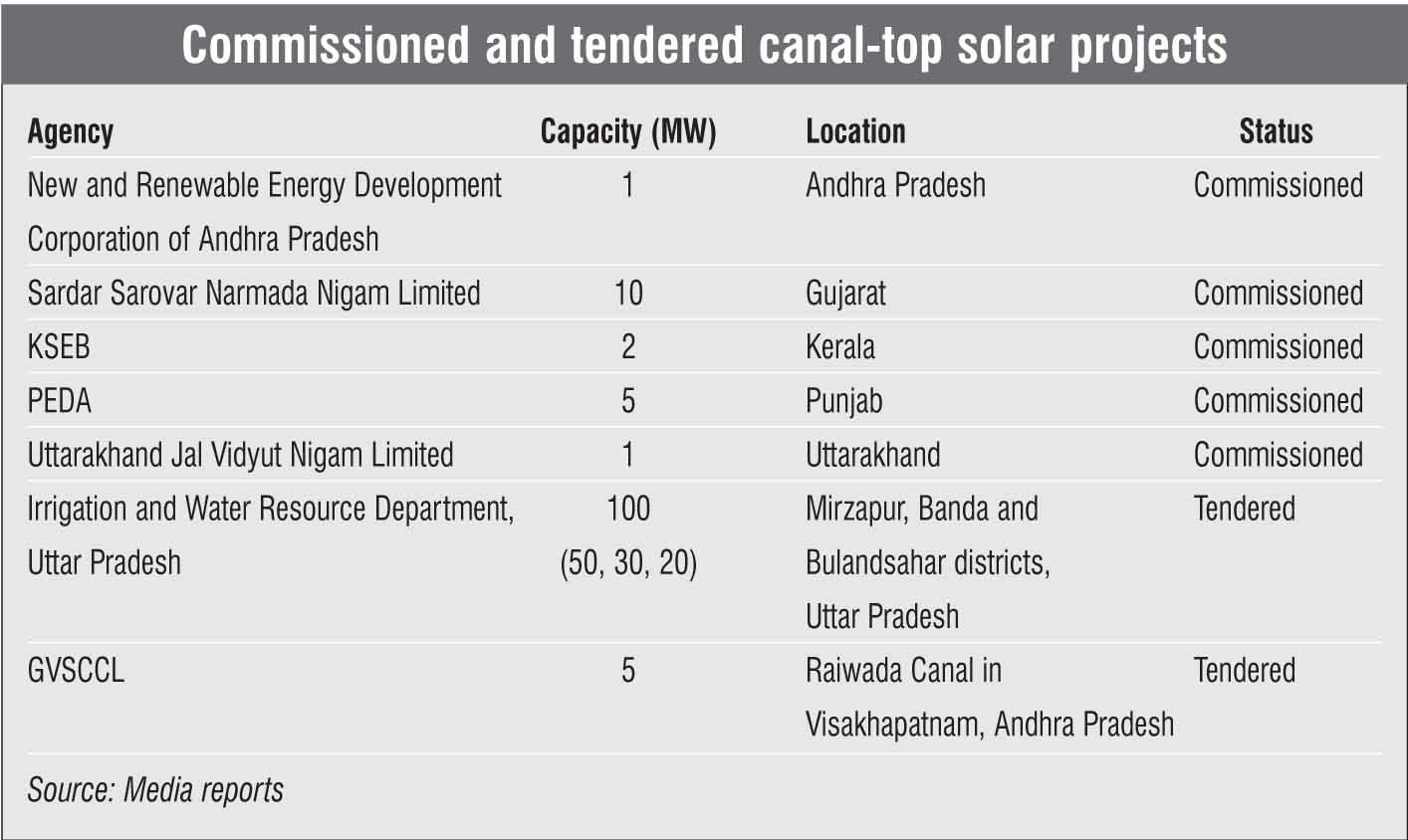 However, the segment faces several issues and uncertainties. For one, there is limited expertise in ensuring safe evacuation of power from the floating facilities to the grid. Ironically, the cost of power evacuation from these projects is quite low as they are located close to hydroelectric power stations. Second, the safety of aqua life is important and needs to be effectively factored into project tenders. There is obviously a third parameter – the cost of such power, which should not differ significantly from land-based solar power. Economies of scale can play a major part in reducing costs to make floating solar project costs per MW closer to or lower than ground-mounted projects. Also, India can take a cue from countries such as China, Japan and South Korea that have successfully implemented large-scale floating projects while providing sufficient support to the industry.

Anmol Jaggi, director, Gensol Group, makes another point. “Float manufacturing has not yet started in India. The cost of logistics is an issue. We are technically importing air, as floats do not take up weight but take up a lot of space in transportation,” he says. Jaggi points out that the transportation space taken for 100 kW of modules is equal to that needed to transport 20 kW of floats.

Operationally, the biggest issue is inadequate long-term experience in floating solar anywhere in the world. Operating conditions, therefore, demand a careful approach in managing equipment corrosion and degradation risks due to the high moisture content in the atmosphere. It may become necessary to devise a new set of technical standards and specifications for floating solar projects. These issues and concerns notwithstanding, the potential for power generation from floating solar in India is huge, as the country is endowed with many large reservoirs. Uttar Pradesh, Odisha, Madhya Pradesh, Karnataka and Andhra Pradesh together account for 79 per cent of the major reservoirs. The overall surface area of India’s major water reservoirs is more than 40 million square km. According to a study, even if only one-third of this area (around 14 million square km) were to be covered with floating solar installations, India could achieve 700 GW of solar capacity. 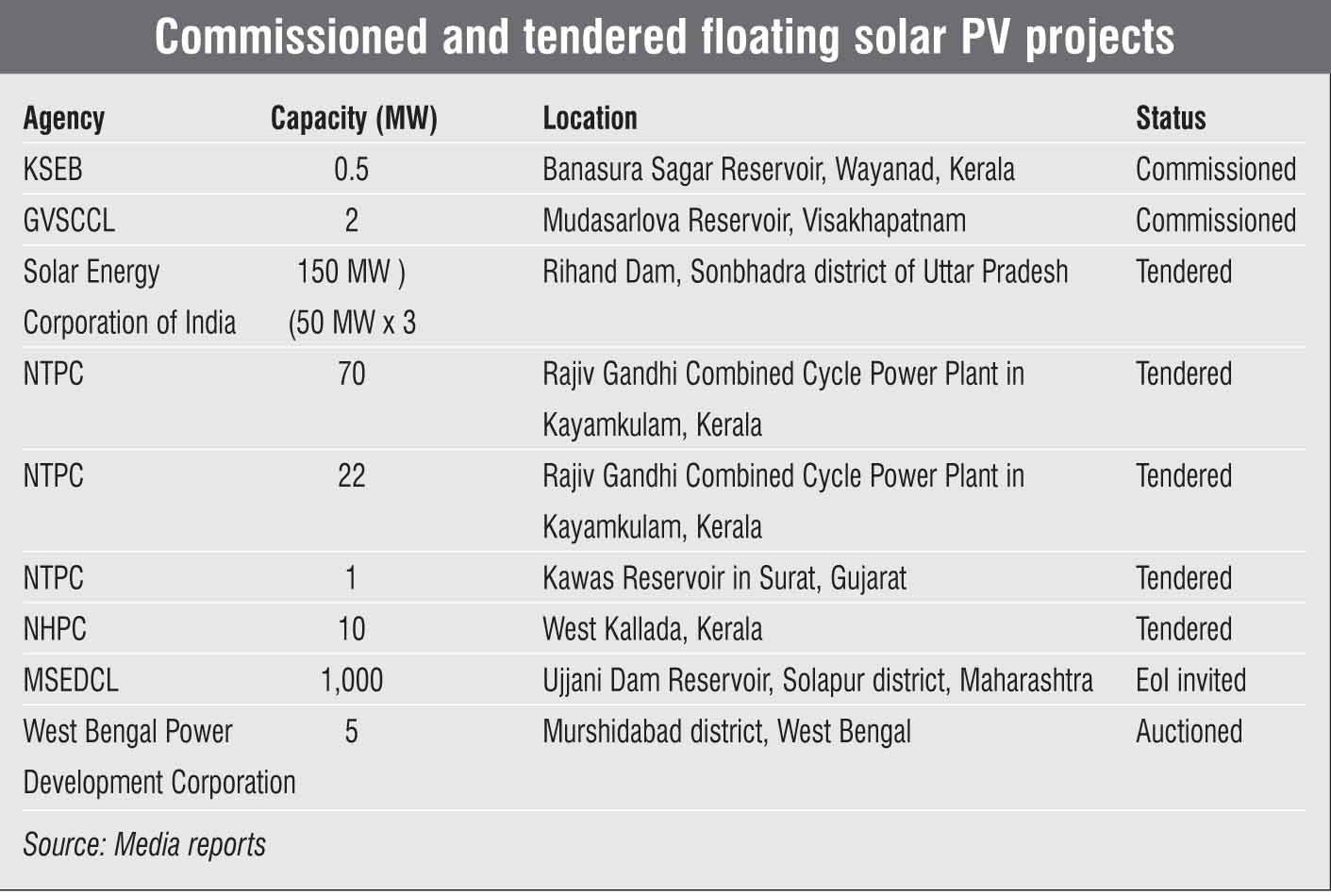 The canal-top idea was first tabled at the 2011 Vibrant Gujarat Summit, post which the first canal-top project was commissioned in the state in 2012. The aim was to utilise the area above the canals, saving the government the cost, time and inconvenience associated with land acquisition.

It has been six years since the project was commissioned. Not only has its performance been encouraging, but the project design and technology have also evolved to become more efficient. In 2012, when the Chandrasan project was commissioned, the land required for a 1 MW solar installation was about 5 acres. By 2015, with advances in technology, this came down to 4 acres. While the capital costs of canal-top installations are higher than their ground-mounted counterparts, the difference has been coming down. The 1 MW solar plant at Chandrasan, set up in 2012, cost Rs 177.3 million, 77.3 per cent higher than the benchmark cost issued by the Central Electricity Regulatory Commission (CERC). The 10 MW canal-top solar plant at Vadodara, set up in 2015, cost about 47.6 per cent higher than the benchmark cost. Going forward, once the technology and manufacturing processes are in place, the auctioning of such projects will create competition in the market and may reduce tariffs to a level comparable to ground-mounted projects.

The power output of ground-mounted solar panels decreases at a rate of 1 per cent every year for the first 10 years. However, according to research conducted by the Gujarat Energy Research and Management Institute, panels mounted on Chandrasan’s canal showed no degradation and the power generated stayed stable for the three-year period they had conducted the study for. Not only do they perform more efficiently but, assuming that the generated electricity is utilised in the nearby areas, the average transmission losses of 4 per cent and distribution losses of 3 per cent are avoided. Apart from this, since the panels are placed on top of water, they are cooled from below, which also increases their efficiency and enhances output by 2.5-5 per cent. Essentially, this means the panels will last longer than 25 years, which is the average lifespan of a ground-mounted solar panel, while producing more power due to increased efficiency. All these benefits have encouraged more players to take up canal-based projects.

One of the noteworthy projects has been the one set up by Cochin International Airport Limited (CIAL), which runs Kochi airport in Kerala. After making this the first airport to be fully powered by solar energy in India, CIAL has been expanding the airport’s solar power capacity. The expansion includes a 6 MW canal-top solar project on the Chengaltodu canal that runs through the airport. In November 2017, 4.5 MW of the canal-top project was commissioned. The project is one of the larger canal-top projects in the country and was built for CIAL by Bosch Energy and Building Solutions, part of Bosch India, for Rs 62.5 million per MW.

Over the past few years, SECI and various state agencies have come up with canal-based project proposals. The potential is immense and so is the opportunity for developers. Gujarat alone has a canal network of 80,000 km. According to Gujarat State Electricity Corporation Limited, using even 30 per cent of this network could help set up 18,000 MW of canal-top solar capacity in the state – almost equal to the current installed coal-based capacity of Delhi, Rajasthan and Telangana – while saving 90,000 acres of land, which is twice the size of Kolkata. In other words, installing solar panels over 30 per cent of Gujarat’s canals could help meet nearly a fifth of the country’s solar power targets by 2022. 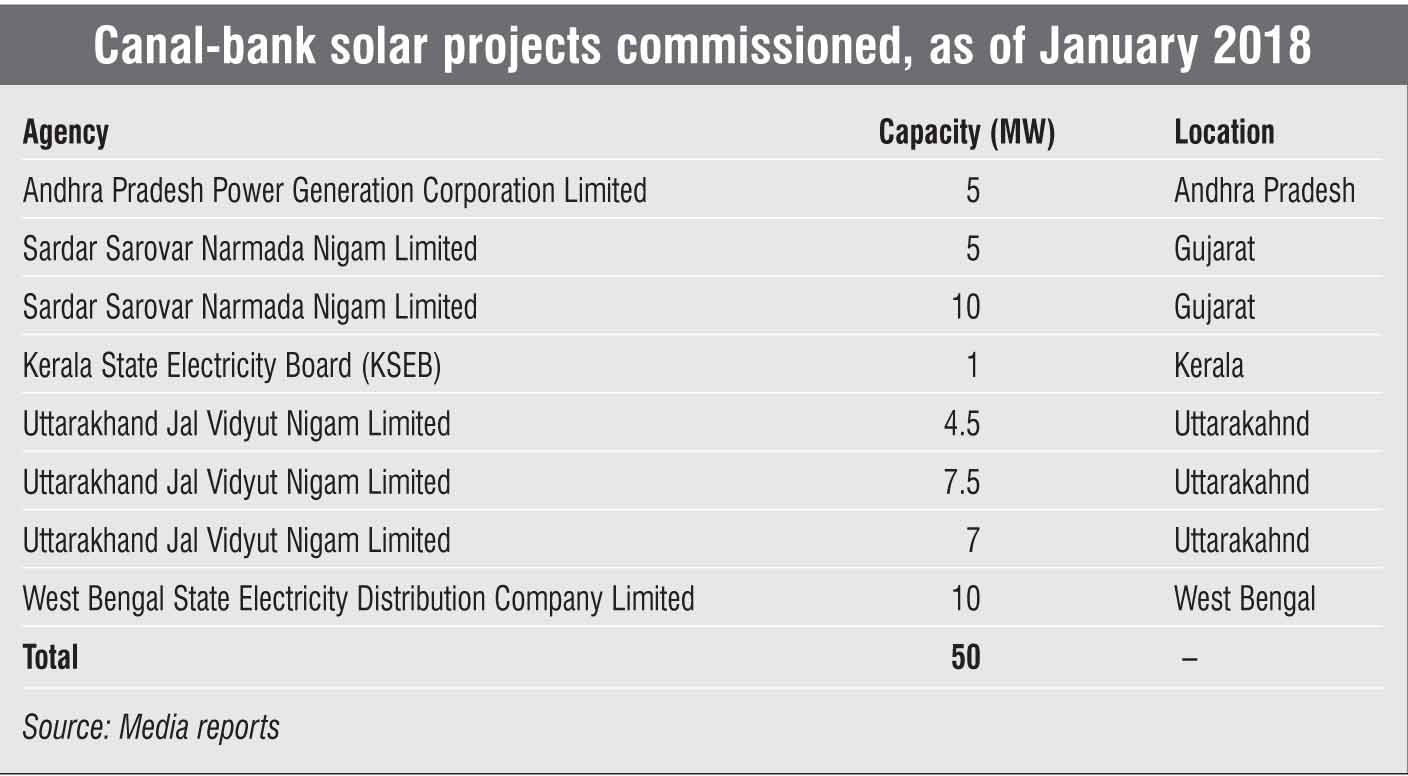 Experts are optimistic that with India’s large network of water bodies, the trend of floating and canal-based solar plants will become the norm soon, although care has to be taken while setting them up so as to not affect marine life. These systems offer hope for a country that is three times as densely populated as China and is aiming for an almost five-fold increase in its solar capacity between 2018 and 2022.

Given that these are new sub-markets, it is natural that there will be some uncertainty regarding operational concerns, technology constraints and tendering delays. The lack of experience in floating PV in the Indian market means that the coming year will call for developing greater understanding of how these projects can be built efficiently. For developers, this is a new opportunity to develop expertise in a domain that has higher entry barriers than the regular ground-mounted and rooftop PV markets. 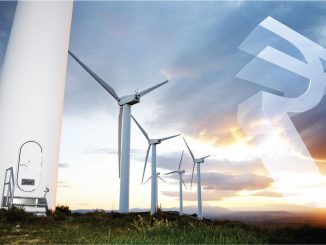 August 2018
“Our main focus will be on small-hydro” Himachal Pradesh has significant small-hydro power (SHP) potential but delays in obtaining clearances (pen...
More 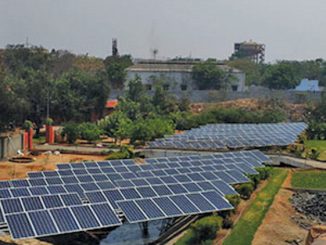