With 34 GW of installed capacity, India ranks fourth globally after China, the US and Germany in terms of wind power. The country accounts for 6 per cent of the total global installed wind capacity of 539.5 GW as of the end of 2017-18. Among the top few global wind turbine manufacturers in this space is Siemens Gamesa Renewable Energy (SGRE), which is headquartered in Spain and has a presence in 90 countries. The company has catered to an installed wind power capacity of nearly 85 GW and accounts for an impressive 15 per cent share of the global wind installation market.

Siemens and Gamesa came together to form a combined entity in 2017. According to the company, merging the two complementary companies was a logical step from a market standpoint as it allowed them to diversify in terms of geography as well as business. The company expects synergies of at least Euro 400 million by 2020 from the merger. Siemens Wind Power has been present in the wind industry since the early 1980s, with a strong presence in parts of Europe in high wind areas and in the offshore segment. Meanwhile, Gamesa has been present in the wind segment since 1994 and is more popular in southern Europe, as well as in the US and India.

Siemens Gamesa has three distinct market focal points – onshore, offshore and services. Of these, it is a market leader in the onshore and offshore segments. In operations and maintenance (O&M) services, the company remains the number two player worldwide.

In 2017, the company set a single-year record in new capacity additions by installing 9.43 GW of wind turbines. Notably, offshore wind was a defining factor in the 2017 rankings and helped Siemens Gamesa secure the top spot.

To strengthen its leadership position in the global market, in February 2018, Siemens Gamesa announced a new global business plan, L3AD2020, which is articulated around business model agility, best levellised cost of energy and digital intelligence. In the offshore segment, the company plans to maintain its leadership position in Europe, where it has a market share of 70 per cent, and establish itself as a significant player in new markets such as Taiwan and the US. In the O&M services space, it expects to leverage digitisation to pursue growth. By 2020 it expects to increase the portfolio for this business by 40 per cent to 80 GW.

In the onshore segment, India holds a stand-alone position for the company, contributing about 30 per cent of its total sales volumes. In fact, Siemens Gamesa accounted for about 2 GW of the total 5.5 GW of wind installations in India in 2016-17, the highest by any original equipment manufacturer (OEM) in a single year, with a market share of 38 per cent. The company, which began its journey in India in 2009, has become the second largest OEM in the country in terms of cumulative installed capacity, and has commissioned 5 GW of wind capacity till date.

Drawing from its global strategy, the company is expanding its base in India. Siemens Gamesa already has blade factories in Nellore (Andhra Pradesh) and Halol (Gujarat), a nacelle factory in Mamandur (Tamil Nadu), and a service centre in Red Hills (Tamil Nadu). Further investments in manufacturing facilities will be decided based on market needs and business performance. The company is also launching a dedicated product for the Indian market through the joint resources of the global and Indian businesses.

The company has recently secured its largest ever wind turbine order for setting up 300 MW of capacity for Sembcorp Green Infra Limited in Gujarat. Under the engineering, procurement and construction (EPC) contract, the company will supply and install 143 turbines and maintain the complex for 10 years. This project will also showcase the company’s SG 2.1-122 turbines, which are specifically designed for Indian wind sites, for the first time. Besides, Siemens Gamesa won a contract for supplying and installing turbines for 200 MW of wind capacity from Orange Renewable in Tamil Nadu.

Meanwhile, the company is slowly making its mark in the solar EPC space and has recently been awarded two contracts for 160 MW of solar photovoltaic (PV) projects – a 100 MW project for a utility and a 60 MW project for an independent power producer. Siemens Gamesa also carried out the EPC works for both solar and wind for the recently commissioned solar-wind hybrid project in Raichur, Karnataka. This project, developed by Hero Future Energies, is the country’s first large-scale solar-wind hybrid project with 50 MW of wind and 28.8 MW of solar PV.

The recent wind auctions and phasing out of feed-in tariffs (FiTs) led to low capacity additions in India in 2017-18, with only 1.7 GW of new additions as compared to 5.5 GW in 2016-17. However, not discouraged by the recent bids, Ramesh Kymal, onshore chief executive officer (CEO), India, Siemens Gamesa, stated, “The industry is now in transition from the FiT regime to the auction system and as an organisation, we have the right strategies in place to stay competitive and retain our leadership position. While the market slump in 2017-18 is just a temporary course correction in its evolution, with the current pace of auctions, we are certain that the industry will reach 8-10 GW of capacity soon. We believe there is a huge capacity to be tapped in India. The fact that wind generation is an entirely domestic industry without any capital imports suggests that the 10,000 MW of wind power projects to be auctioned every year is definitely sustainable.”

He further explains, “In India, the price discoveries in the first few auctions were aggressive and were primarily attributed to the demand-supply gap in the market. The most recent auctions saw a rise in tariffs due to market stabilisation with an increase in auction volume and future visibility. We expect tariffs to rise further as we see the projects moving from the current high wind potential sites in Tamil Nadu and Gujarat to other states where the wind potential is lower. Future tariffs will be a function of the industry’s long-term profitability, wind resources and the demand that the government creates via auctions.”

The company is quite optimistic about the government’s plans for developing the offshore wind segment due to its strong market position and a well-established offshore business globally. However, as per the company, a lot of work needs to be done for creating the right ecosystem and infrastructure to attract investments for the offshore segment. As such, port infrastructure, marine equipment, fabrication units and marine electrical infrastructure turbines have to be considered apart from the turbines. The permitting and approval process is already cumbersome for onshore projects in India, and these difficulties are magnified for offshore projects.

Siemens Gamesa is following the global trend wherein all OEMs are focusing on improving turbine performance by developing large rotors and higher towers. The company is focusing on developing larger and more efficient turbines and even customised turbines for Indian conditions, which can operate with an efficiency of nearly 40 per cent despite lower wind speeds. The company feels that blades are critical to determine the cost of energy, and is working on developing longer blades that use advanced composites such as carbon fibre and infusion process to reduce weight and costs while improving aerodynamic efficiency for higher generation.

Siemens Gamesa is looking for advancements in SCADA systems and data analytics for enabling better turbine management and operations, as analytics helps identify potential failures, which assist OEMs in taking corrective measures to improve turbine performance. With the datasets getting larger, the industry is developing solutions that can present big data into smarter actionable information. To this end, machine learning and artificial intelligence would help in making the turbines smarter and more efficient.

In addition, the company is actively looking for opportunities in the hybrid space in India, and Kymal feels that solar-wind hybrid plants have a huge potential in the country, especially when integrated with energy storage. Currently, wind farms are being converted into hybrids by installing solar panels, and hybrid power is then being sold to third parties, a provision that is available in only a few states as of now. However, a clear tariff policy is needed for the solar and wind hybrid segments in India, along with clarity on whether there is going to be common bidding or separate bidding for these projects.

As far as the company’s growth plans for India are concerned, Markus Tacke, global CEO, SGRE, states, “India is a key market for us and will continue to be one for years to come. We have grown incrementally in India over the years. The global wind market dynamics are changing and so are they in India. Given the market potential, we will primarily focus on responding to the market with more agility, better products and comprehensive digital intelligence, which will set us on the path of strong profitable growth, which is in line with our global strategy L3AD2020.”

In sum, the competitive advantage of larger size and scale, along with geographic diversification, have provided the necessary push,  enabling Siemens Gamesa to claim the top spot not just in India but globally as well. Going forward, a varied product mix, global presence and strong position in the offshore wind segment should help the company safeguard its lead position amongst its competitors. 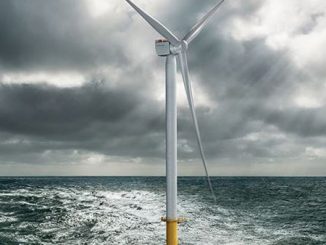