With agriculture being the main occupation in rural India, providing adequate irrigation to farmers is the primary concern of the government. Since farmers continue to rely on erratic monsoons as the primary source of irrigation, about 50 per cent of the country’s net sown area is still not irrigated. Although there are 90 million electric pumps in India, long power cuts in the country make it difficult for farmers to effectively utilise them. As a result, they resort to the 9 million diesel pumps available in the country.

For these reasons, the central and state governments are providing  an impetus to solar pumps in the country. Solar pumps will provide energy access to farmers for irrigating their fields, and help reduce the use of highly polluting diesel pumps. According to Amitabh Kant, chief executive officer, NITI Aayog, access to reliable and affordable irrigation is one of the most important enablers for increasing agricultural productivity and farmer incomes. He believes that solar pumps can boost Indian agriculture by fulfilling the unmet irrigation needs, and increasing farmers’ resilience to climate change.

The government has set an ambitious target to install 1 million solar pumps throughout the country by 2021. However, according to the Ministry of New and Renewable Energy (MNRE), only 240,000 solar pumps had been sanctioned and 147,527 (15 per cent of the national target) had been installed as of December 31, 2017. Of this, 32,649 pumps were installed in 2017.

The central government has been actively encouraging the uptake of solar pumps through various schemes and programmes for farmers. The MNRE provides a central financial assistance (CFA) of up to 30 per cent of the benchmark cost of solar pumps to farmers, through its empanelled channel partners, under the Off-grid and Decentralized Solar PV Applications Scheme.

A popular government scheme was discontinued in March 2017, due to difficulties faced by farmers in raising collateral security. As a result, only large farm owners were benefiting from the scheme. As per the scheme, 40 per cent of the total amount was provided to the farmers as CFA through the National Bank for Agriculture and Rural Development, while another 40 per cent was made available for a tenor of 10 years and 20 per cent was required to be paid by the farmers as down payment. 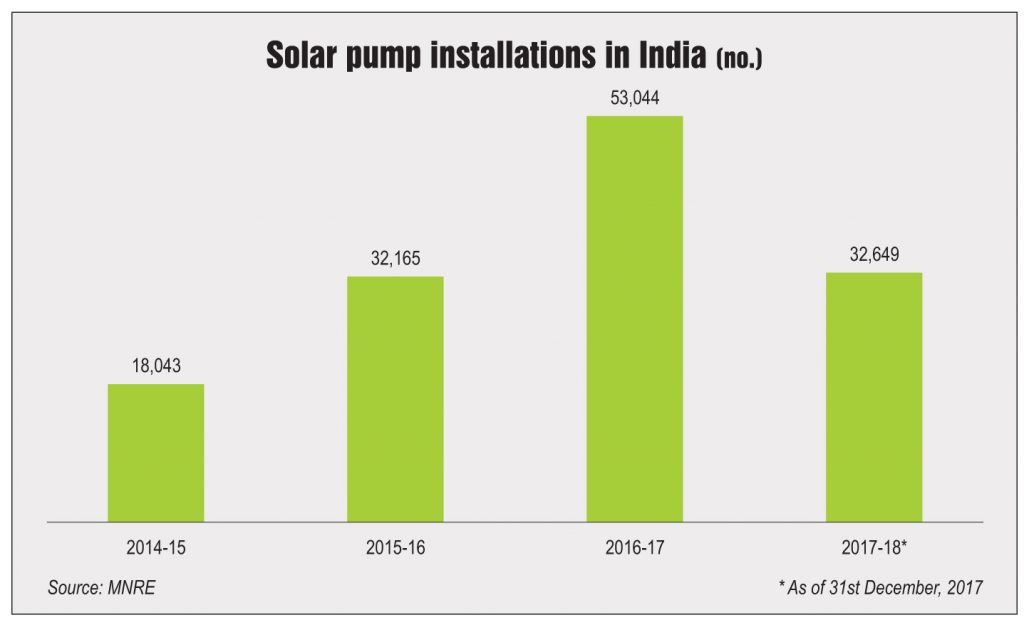 The Rajasthan government has introduced a scheme through which additional support is provided to farmers in the form of subsidy on 3 HP and 5 HP solar pumps, over and above the CFA being provided by the MNRE. Meanwhile, Chhattisgarh’s “Saur Sujala Yojana”, launched in November 2016, provides 3 HP solar pumps worth Rs 350,000 each at subsidised rates of Rs 7,000 to backward classes and Rs 18,000 to general category farmers, while the rest of the cost is borne by the state government. The states of Andhra Pradesh, Uttar Pradesh, Odisha, Tamil Nadu and Haryana are also providing solar pumps to farmers at highly subsidised rates, with the subsidy amount being greater for the backward classes, in addition to the CFA being provided by the central government. In fact, in Tamil Nadu and Haryana, farmers have to pay only 10 per cent of the total cost of solar pumps, and the rest is taken care of by the state government and the central government.

States like Gujarat have a provision for buying the surplus electricity generated from solar pumps that are connected to the grid. The state-owned distribution companies can buy this power at the rooftop solar net metering rate, or the average power purchase cost for the year, or any other rate mutually agreed upon by the farmers and the discom, as decided by the regulatory authority. In fact, a farmers’ cooperative in Dhundi village of Gujarat is supplying power to Madhya Gujarat Vij Company Limited at a feed-in tariff of Rs 4.63 per unit under a power purchase agreement for 25 years. This project has received funding from two international agricultural research organisations – the International Water Management Institute and CGIAR Research Program on Climate Change.

Meanwhile, Maharashtra has released the Mukhyamantri Agricultural Solar Feeder scheme, under which instead of distributing individual solar pumps to farmers, agricultural feeders will be separated from the main power feeders and these will be powered through solar energy.

The state governments are implementing schemes that target small and debt-ridden farmers, who suffer the most due to inadequate irrigation of their fields. Creating awareness amongst farmers about the benefits of solar pumps, and ensuring efficient implementation of government schemes are the key priorities for the state nodal agencies. Innovative business models are being adopted to address the problems of the farmers without burdening the state governments and discoms. Several private and government enterprises are working in this direction by engaging grassroots-level community associations as well as non-profit organisations to ensure capacity building of  farmers and lending agencies, and scale up solar pump deployment across the country in a sustainable manner. 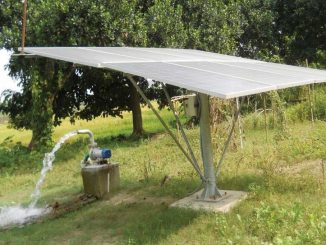 April 2019
By Khushboo Goyal Reliable and affordable power supply for irrigation is essential for increasing agricultural productivity. However, the power supply...
More