Solar projects in India have mostly been constructed through the engineering, procurement and construction (EPC) route. From new entrants to established players, project owners typically prefer to pass on time and cost overrun risks to a contractor and focus on developing their project portfolio, arranging financing and ensuring the best returns. The responsibility of designing, procurement of material and construction of solar projects is, therefore, mostly undertaken by EPC contractors.

The EPC contract model has evolved to reflect the shift in balance of risk in favour of project owners. In fact, in many of the new contracts being signed now, EPC contractors also take care of currency and interest rate fluctuation risks.

Unlike other contracts, where procurement and design are considered separate processes, in EPC contracts these are undertaken simultaneously, reducing the overall duration of the project. Initially, there were only a few contractors that had the required technical and financial capability to execute such contracts and take the full responsibility of project development. Therefore, large projects were divided into separate EPC packages. Gradually, EPC contractors developed the technical expertise and financial capability, and project owners began to award them complete projects as a single turnkey contract.

Currently, the Indian solar EPC market has more than 150 participants and a multitude of stakeholders. Players have carved out a niche for themselves and built their reputation based on their segment focus. While some have diversified into other sectors, others have restricted their operations to only one subsegment, such as rooftop solar, thereby positioning themselves as focused players.

Renewable Watch has tracked key solar EPC contracts awarded in the Indian solar power space in 2017-18, in both the utility-scale and the rooftop solar segments. The details are as follows: 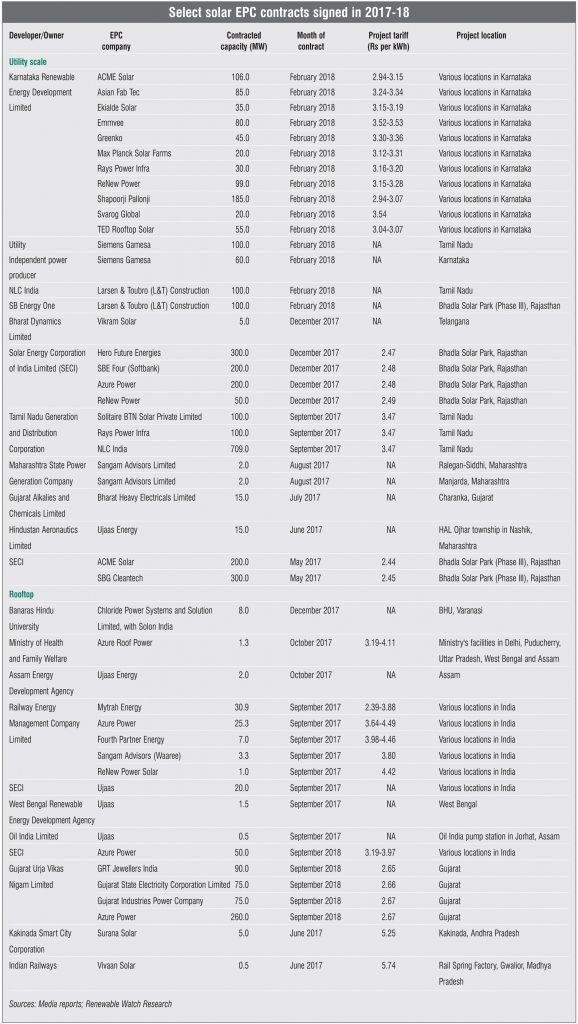