The HDFC ERGO General Insurance Company has launched a solar energy shortfall insurance policy. The policy will protect lenders and developers against any shortfall in the expected solar power generation due to non-physical damage. Non-physical damage will include suboptimal design, lower-than-expected solar radiation, and error in the determination of yields during the design phase. The insurance will safeguard project operators from the financial liabilities that they may face in case they are unable to supply the volume of electricity promised in the power purchase agreements. The policy duration has been set for five years.

ICICI Lombard too has issued a product to cover reduced generation as a result of physical defects in the solar panels. The insurance coverage is set for a period of 15 years. Project developers will be safeguarded against loss in generation due to faulty manufacturing and unexpected degradation of solar panels. 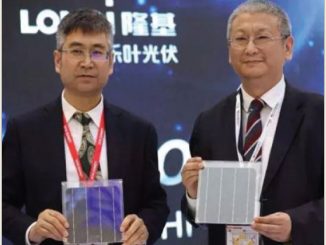 January 2018
LONGi Solar, a subsidiary of LONGI Green Energy Technology, has reported a record bifaciality reading of 82.15 per cent for its “Hi-MO2” mono PERC...
More