The solar power market in India has entered the maturity phase over the past year. It recorded a growth rate of about 82 per cent in 2016-17. In fact, solar power capacity addition has picked up significantly in the past three years, with more than 75 per cent of the total installed capacity being set up during this period. From a modest 1.7 GW in 2012 to 13.1 GW in August 2017, the market has grown at a compound rate of over 65 per cent during the period. The growth has been driven by key parameters such as falling capital costs, sliding solar power tariffs, favourable policy measures and declining cost of capital as low-interest funds become accessible.

One of the most striking developments in the solar segment over the past year has been the steep fall in tariffs. The latest low was Rs 2.44 per kWh recorded in the auction for 500 MW of capacity at the Bhadla Solar Park in Rajasthan. Apart from the government’s push to achieve 100 GW by 2022, intense competition among developers and a drop in global equipment prices are the key factors that are driving down tariffs. This can be attributed to the fact that a number of international players have forayed into the Indian solar market with deep pockets and large appetites. While several global majors such as SoftBank (Japan), Engie (France), Enel (Italy), Canadian Solar (Canada) and Sembcorp (Singapore) have already entered the Indian market, others such as Norway’s Statoil ASA, France-based Total SA and Netherlands-based Royal Dutch Shell Plc are looking at India as a promising investment opportunity. Meanwhile, a number of domestic firms such as ReNew Power and ACME Solar have received access to low-cost funds, adding to the competitive pressures. 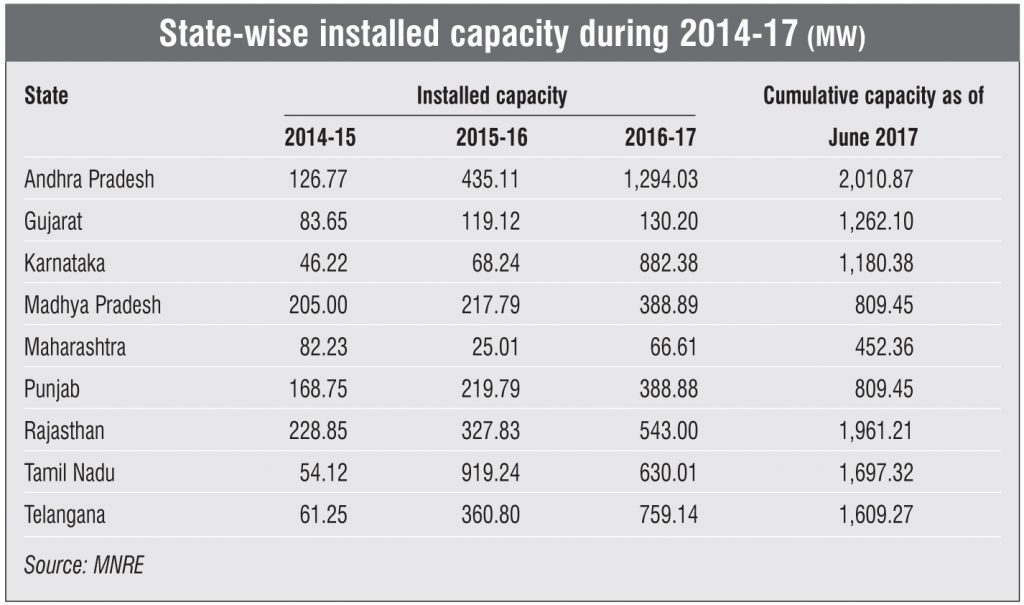 To achieve the 100 GW solar target by 2022, the government is looking to add 12-15 GW of solar power capacity annually over the next five years. The target specified for 2017-18 is 10 GW – 9 GW of ground-mounted and 1 GW of rooftop solar capacity. However, as of August 2017, only 1.5 GW or 16.6 per cent of the targeted ground-mounted solar capacity, and about 10.6 per cent of the rooftop solar capacity was installed. Capacity addition is expected to improve in the second half of the current financial year as the state and central tenders released in the third and fourth quarters of the previous year will begin to realise.

In June 2017, Andhra Pradesh became the largest solar state in the country with a cumulative installed capacity of over 2 GW, followed closely by Rajasthan at 1.96 GW. While Tamil Nadu had the highest solar installed capacity at 1.59 GW as of January 2017, it has grown little, only to reach 1.69 GW of capacity by June 2017. This is primarily due to power evacuation issues in the state that have forced operators to curtail solar power generation, which has affected the upcoming tenders in the state as investors are wary of the losses they would have to bear due to the backing down of plants. Telangana has shown the highest growth by achieving an installed solar capacity of 1.6 GW since its formation about four years ago. Karnataka with 1,180 MW and Madhya Pradesh with 857 MW of installed capacity have also grown significantly during the year. Gujarat, on the other hand, recorded a marginal increase from 1.1 GW in January 2017 to 1.26 GW in June 2017. 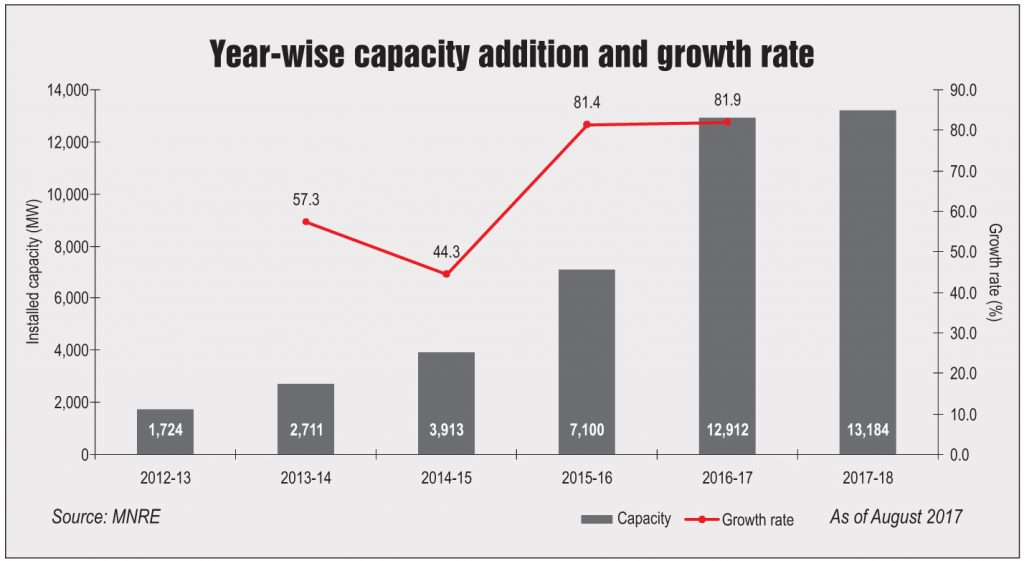 The Indian rooftop solar segment also grew considerably in 2016-17, at the rate of about 81 per cent over 2015-16. The Indian solar market is dominated by the commercial and industrial rooftop segments, contrary to the global trend. This is primarily due to high discom tariffs for the industrial and commercial categories in the country. As of March 2017, the total rooftop solar capacity in the country stood at 1.3 GW, of which about 42 per cent or 590 MW was in the industrial consumer segment, 22.4 per cent or 313 MW in the commercial segment and 21.7 per cent or 303 MW in the residential segment, while the remaining was installed on government buildings.

State-wise, distribution of rooftop solar capacity in Tamil Nadu, Maharashtra, Haryana and Punjab is dominated by the commercial and industrial segments. These are followed by Gujarat, Rajasthan, Delhi, Uttar Pradesh, Andhra Pradesh and Telangana. Capacity addition in these states is largely driven by high tariffs for grid-based electricity and favourable government policies. However, rooftop capacity addition lags in states such as West Bengal, Jharkhand and Jammu & Kashmir as well as the north-eastern states.

For the development of rooftop solar capacity in the country, the states also need to implement net metering policies. Net metering has seen patchy progress so far due to a poor policy framework and strong reluctance among discoms to execute the policy. There have been no amendments to the policies formed based on the guidelines issued in 2013, despite the growth in the rooftop solar segment and the solar industry in general. Further, the restrictive nature of the policy such as caps on system capacity and deployment limitations leads to sluggish implementation. The lack of incentives for the adoption of the policy has been another reason for the poor execution of the policy. 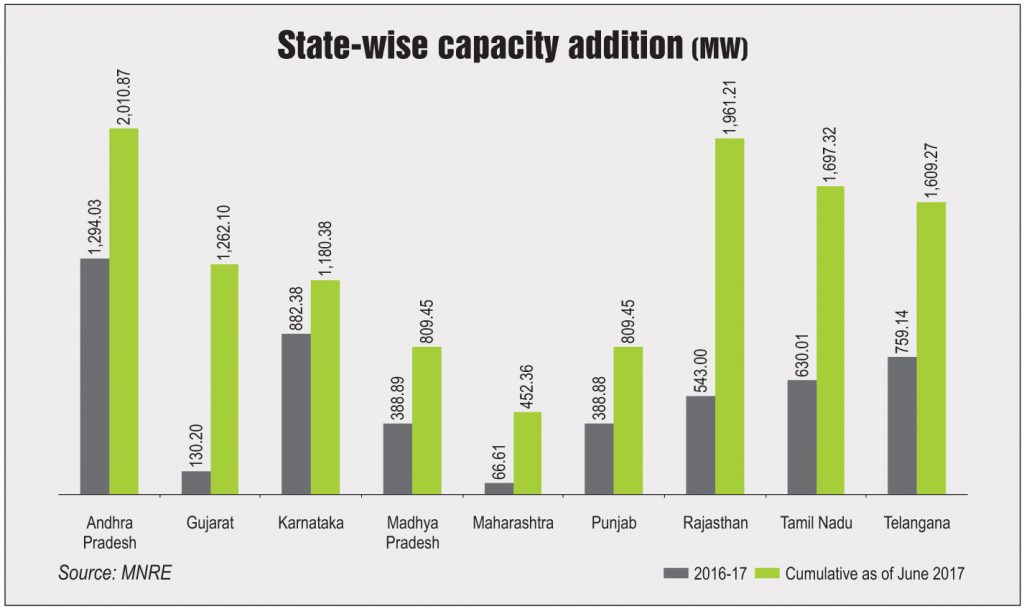 India has emerged as a promising market for solar equipment. However, the state of domestic manufacturing remains dismal in the country as international players dominate the market. Foreign players, which are primarily Chinese, have either set up manufacturing units in the country or are importing modules. Due to the lack of import duties on renewable energy equipment, imported modules are cheaper than those manufactured domestically. The steep fall in equipment prices across the world has further worsened the prospects of Indian manufacturers, despite strong measures being taken under the Make in India initiative. As per Bridge to India, in 2016-17, Chinese companies held a 75 per cent market share in the Indian solar segment. As a result, much of the domestic manufacturing capacity stands underutilised, with only less than a quarter of the cell capacity and about half of the module capacity currently operational. Given the glut of solar modules in the country, the handful of Indian manufacturers with large capacities are now shifting their focus towards upcoming international markets such as the Middle East and Africa. Low prices and domestic content restrictions have discouraged Indian manufacturers from expanding into the home market.

The government is determined to promote the manufacturing of solar power equipment in the country. Under the Make in India initiative, international solar manufacturers are encouraged to set up equipment manufacturing facilities in India, which will augment the domestic manufacturing capacity and further bring down the prices. To this end, the government is planning to roll out a $3 billion programme called the Pradhan Mantri Yojana for Augmenting Solar Manufacturing or “PRAYAS”, under which 5 GW of capacity will be developed by 2019.

Given the new policies and financial incentives, several companies have announced their plans to start manufacturing in India. The Adani Group is planning to invest $3 billion to develop a 3 GW solar manufacturing plant in the country over the next three years. Of this, around 1.2 GW is expected to be operational by end-2017. Meanwhile, Shapoorji Pallonji, Lanco, Waaree and Emvee are also reportedly considering investing in the domestic solar manufacturing arena. China-based Trina Solar has plans to invest $200 million-$300 million in a manufacturing facility in Andhra Pradesh, with solar cell and module manufacturing capacity of 700 MW and 500 MW respectively. 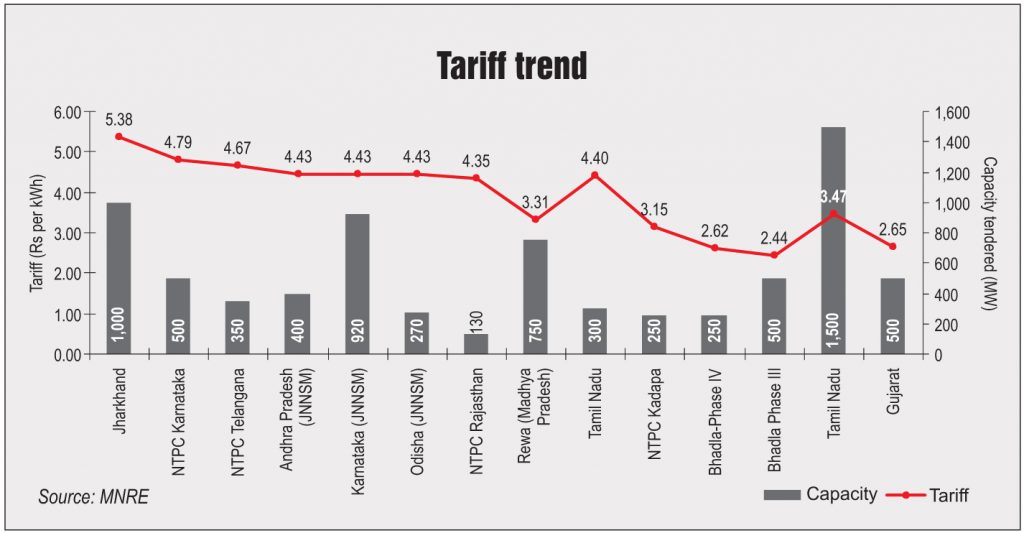 Even as the solar power segment progresses in the country, multiple challenges continue to plague the market, often dampening investor interest. These roadblocks lead to restricted growth. The following are some of the key issues and challenges faced by the Indian solar segment: 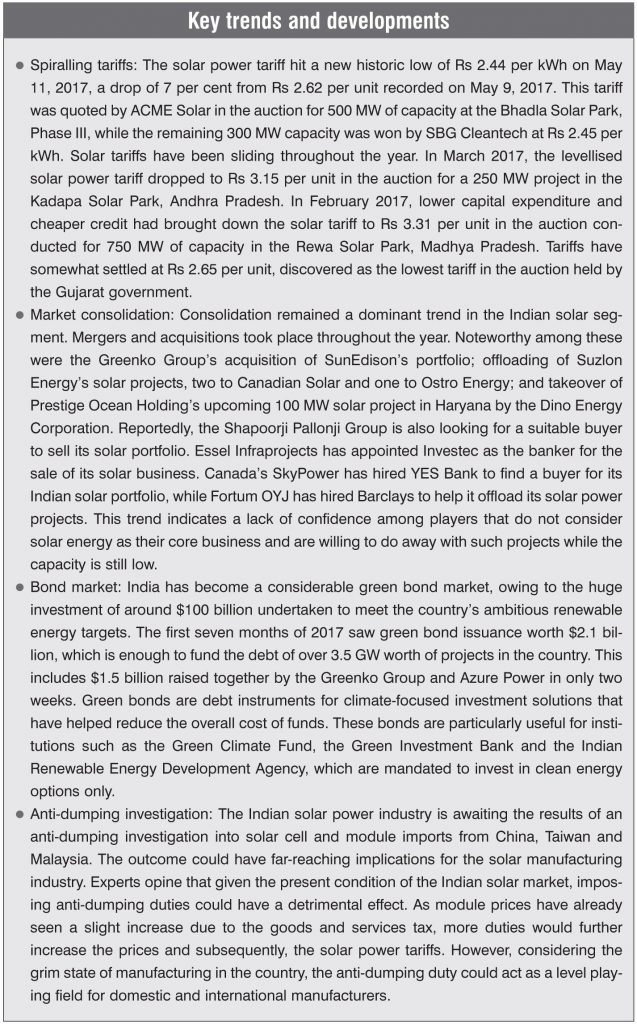 Efforts are being made to address the aforementioned challenges and facilitate the growth of the Indian solar power market in order to meet the country’s 2022 targets. The target for 2017-18 is still a distant reality, as the pace of new tender announcements and completed auctions has slowed down significantly over the past year, by 68 per cent and 59 per cent respectively. Several states have front-loaded capacity addition – Andhra Pradesh (installed and tendered 74 per cent of capacity targeted for March 2022), Telangana (70 per cent) and Karnataka (69 per cent) – and are bound to slow down. In the medium term, the outlook for the sector remains bright as viability concerns regarding low tariffs would get sorted and states would become more streamlined in capacity allocation.

In addition, there is a growing need to increase investments in the solar power space. To this end, innovative financial mechanisms and alternative instruments are being designed to lower the cost of capital, and low-cost, long-term commitments are being secured from global institutions. In the next year, India will demonstrate leadership in green finance as it will establish its first green bank and begin to support local banking options through unique public-private mechanisms. New sources of finance will increase the influx of capital, mainly from international institutions and reduce the overall cost of capital in the sector.

Given the achievements and developments of the solar segment over the past five to six years, the country seems to have built a significant ground for future solar power development. However, the challenges cannot be overlooked as they can seriously hamper the achievement of the 100 GW target. 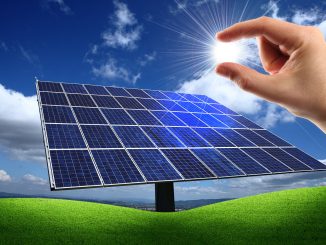 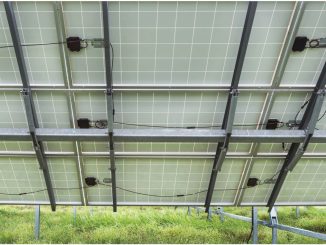 December 2017
Solar photovoltaic (PV) projects require a high-quality cabling system that connects all the electrical components together with minimum loss in energ...
More

December 2017
India Power Corporation Limited (IPCL) was incorporated in 1919 as a utility and power generation company. Over the years it has been growing its rene...
More