Connecting remote areas to the grid continues to be a daunting task for the government. Of the 15,019 villages electrified over the past two years, only 8 per cent have achieved 100 per cent household connectivity, indicating the challenges faced during grid expansion. Moreover, despite being socially imperative, bringing the grid to remote areas is expensive and makes little economic sense given the small populations in these areas. In this scenario, off-grid power systems have emerged as a viable alternative and are being deployed for various purposes such as irrigation, cooking, lighting and heating. Renewable Watch takes a look at the key developments in some of the off-grid segments over the year…

At present, India has about 19 million grid-connected and 9 million diesel pumpsets. However, given the erratic grid power supply and rising fuel costs, these options are a financial burden for farmers. Solar-powered pumpsets can address the issues associated with conventional pumpsets and provide cost-effective irrigation to farmers.

Under the National Solar Mission (NSM), the solar pumpset segment has attracted significant interest. In March 2014, the government had approved subsidies of Rs 3 billion to help farmers install solar-powered water pumps to boost their agricultural yield and reduce diesel usage. Subsequently, the government initiated a programme to install 100,000 solar pumps for irrigation and drinking water purposes across the country, with financial support of Rs 4 billion. As of October 2016, a total of 90,710 solar pumps were installed across the country.

A key challenge facing this market is the high cost of solar pumpsets; a 5 horsepower (HP) solar water pumpset costs Rs 100,000-Rs 120,000. As part of the government’s off-grid programme, 30 per cent subsidy on the cost of the system ranging from Rs 21 to Rs 105 per watt is provided in the general category states, depending on the capacity of the modules and configuration of the solar PV systems/plants. The capital subsidy for solar water pumping stations ranges from Rs 27,630 per HP to Rs 57,600 per HP.

The difference between the sanctioned funds and disbursements has emerged as a major issue for the solar pump market. From 2014 to 2016, only about a quarter of the funds sanctioned annually have been disbursed, leading to a reduction in the number of projects. 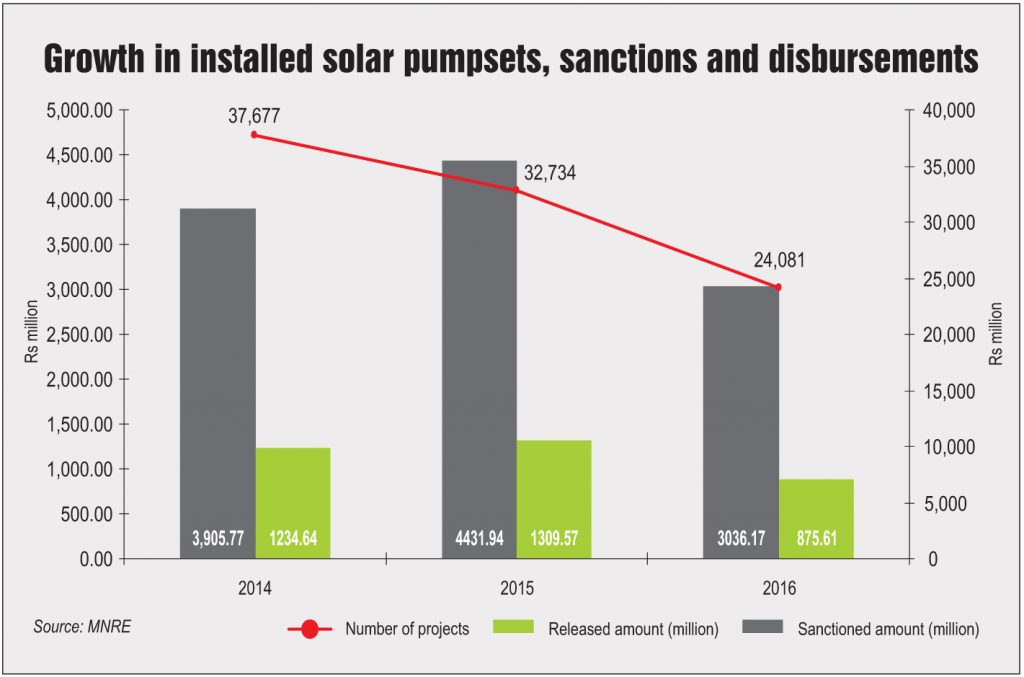 The Indian solar water heater (SWH) market increased from 650,000 square metres in 2003 to 8.9 million square metres in January 2016, growing at a compound annual growth rate (CAGR) of about 24.4 per cent. This can be attributed to the increasing uptake by the residential segment, growing awareness and falling costs. The reduced costs have also increased the popularity of these systems in hotels, hospitals and other commercial institutions.

Until 2014, the Ministry of New and Renewable Energy (MNRE) offered 30 per cent subsidy, which was the primary growth driver for the segment. However, the launch of evacuated tube collector (ETC) solar water heaters in October 2014 led to the discontinuation of the subsidy. The ETC systems offered better returns on investment as compared to flat plate collector systems. Therefore, the subsidy was removed to encourage the segment to become self-sustainable.

Demand for solar lanterns is expected to reach around 35 per cent of the underserved market by 2018, as compared to only 5 per cent in 2014. These solutions are affordable, but can provide only basic lighting. Thus, solar home systems and decentralised renewable energy solutions are better positioned to serve the evolving demand in rural areas.

The MNRE’s Rural Village Electrification programme, launched in 2001, aims to provide lighting and electricity facilities through renewable energy systems to areas not covered under the Rajiv Gandhi Grameen Vidyutikaran Yojana. As of January 2017, the amount sanctioned for villages and hamlets under the programme was almost Rs 3.71 million. The programme is particularly relevant in Madhya Pradesh, Odisha, Jammu & Kashmir, Chhattisgarh and Jharkhand as well as the north-eastern states due to difficulties in grid expansion and the presence of a large unelectrified population in these regions.

In addition, the deployment of around 1 million off-grid lighting systems is being targeted under the NSM. A credit-linked capital subsidy scheme for solar lighting is also being implemented through the National Bank for Agriculture and Rural Development and regional rural banks.

The adoption of biomass-based off-grid systems has been slow in the recent past with the MNRE consistently falling short of its target by huge margins. As against the target of 60 MW of installed non-bagasse cogeneration biomass capacity for 2017-18, only 9.5 MW was achieved as of September 2017. The total installed capacity from non-bagasse cogeneration biomass stood at 661.41 MW, hardly an increase over the 651.91 MW in September 2016. Further, approximately 0.92 MW of capacity was added from biomass gasifiers against a target of 7.5 MW, taking the cumulative installed biomass gasification capacity to 163.37 MW.

Microgrids provide a community-based alternative to grid-connected power. Of late, solar has become the most important generation source for microgrids while the popularity of biomass has also grown considerably. However, India’s potential for microgrids remains underutilised due to the absence of efficient and cost-effective energy storage technologies. The MNRE provides a capital subsidy of 30 per cent on the cost of installation of solar micro- and mini-grid systems under the off-grid and decentralised solar applications scheme of the NSM. Therefore, a subsidy of Rs 105 per Wp is provided for a 10 kWp microgrid (DC) and a subsidy of Rs 90 per Wp for microgrid systems having module capacity in the range of 10 kWp to 250 kWp. In addition, the ministry provides a minimum warranty of five years for these systems in the rural and remote areas. 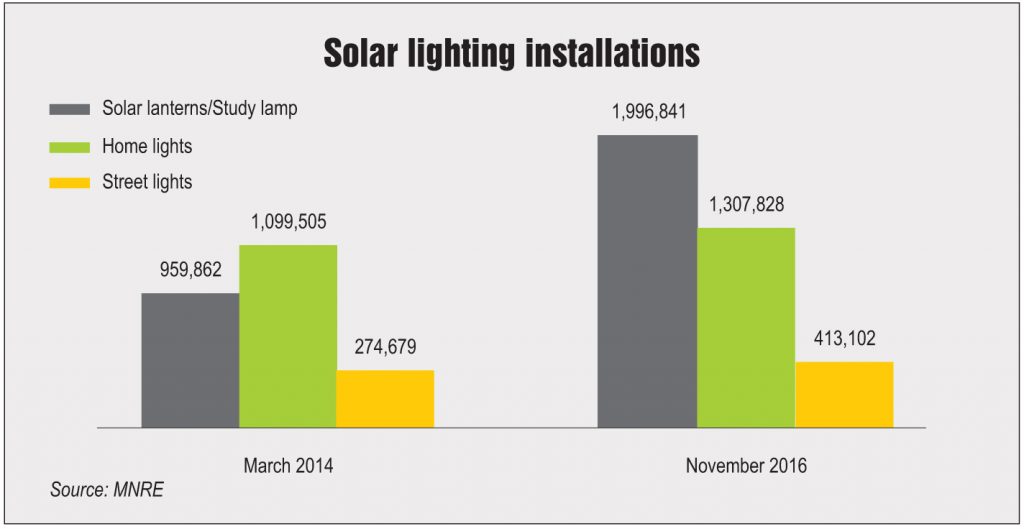 Despite significant adoption of renewable off-grid power solutions, the segment’s growth remains sluggish due to various factors. Manufacturers in the segment are still not mature and often face difficulties in securing finance for capital expansion. This prevents them from achieving higher efficiencies while bringing down costs.

The majority of the consumer base of the segment is located in far-flung areas and is dependent on agricultural income subject to seasonal variations. Therefore, financing the entire project upfront is not always feasible and securing loans from financial institutions is also difficult. The precarious financial situation restricts both supply and demand in the off-grid market. Moreover, the lack of awareness of the benefits and subsidies provided for such systems is a deterrent to the growth of the segment. For policymakers, the segment is often overshadowed by grid-connected renewables. The ambiguity in the policy structure further restricts the uptake of off-grid power solutions.

In light of the significant socio-economic gains of off-grid solutions, the government should focus on their growth in parallel with grid-connected power, and formulate proactive policies to make the segment more attractive for investors. The financial benefits provided to investors and manufacturers will help them scaleup operations in the segment, thereby reducing costs. Financiers, in turn, need to come up with innovative instruments for both consumers and manufacturers in order to increase the uptake of off-grid solutions. The government should also focus on creating greater awareness about the viability and benefits of such technologies to drive uptake.