States like Tamil Nadu, Maharashtra, Haryana and Punjab have the largest commercial and industrial consumer base in the rooftop solar segment as these are highly industrialised. These are followed by Gujarat, Rajasthan, Delhi, Uttar Pradesh, Andhra Pradesh and Telangana. In addition to high tariffs for grid-based electricity, capacity addition in these states is driven by favourable government policies. However, the commercial and industrial segments lag in rooftop capacity addition in states like West Bengal, Jharkhand, Jammu & Kashmir as well as the north-eastern states.

Given the high commercial and industrial tariffs and their high annual growth in most states, savings on electricity bills become the primary driver for these consumer segments. As per the study, about 60 per cent of developers believe that industrial and commercial consumers switch to rooftop solar power generation to save on electricity bills, followed by 21 per cent that wish to reduce their carbon footprint and about 8 per cent switch because it is a social obligation to generate renewable power. According to BRIDGE TO INDIA, these consumers effectively save up to 50 per cent of their power expenses by moving from grid-based power to rooftop solar. 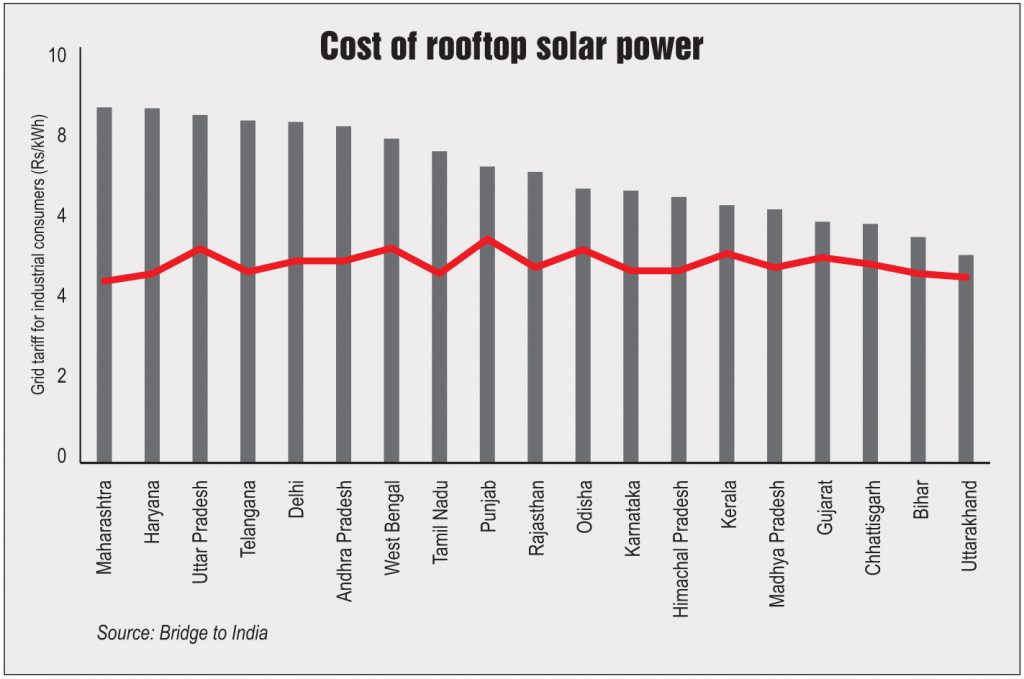 The development of rooftop solar projects for power generation makes considerable sense for the industrial and commercial segments in India as the levellised tariff is significantly lower than grid-based tariffs. State-wise solar rooftop tariffs vary greatly, from the lowest in Madhya Pradesh at Rs 5.37 per kWh to the highest in Odisha at Rs 6.92 per kWh, and an average tariff of Rs 5.74 per kWh. The tariffs largely depend on the state’s solar irradiation, infrastructural development, rooftop solar potential and economic status. Madhya Pradesh, Delhi, West Bengal, Karnataka and Maharashtra are some of the country’s solar-rich states, while Jammu & Kashmir and Odisha have the lowest rooftop solar potential.

As per a comparative analysis by BRIDGE TO INDIA, solar rooftop tariffs in states such as Maharashtra, Haryana and Telangana are about half their industrial and commercial grid power tariffs. On the other hand, states such as Kerala, Madhya Pradesh, Gujarat, Chhattisgarh, Bihar and Uttarakhand have low grid-based tariffs. Therefore, rooftop solar does not result in high savings. 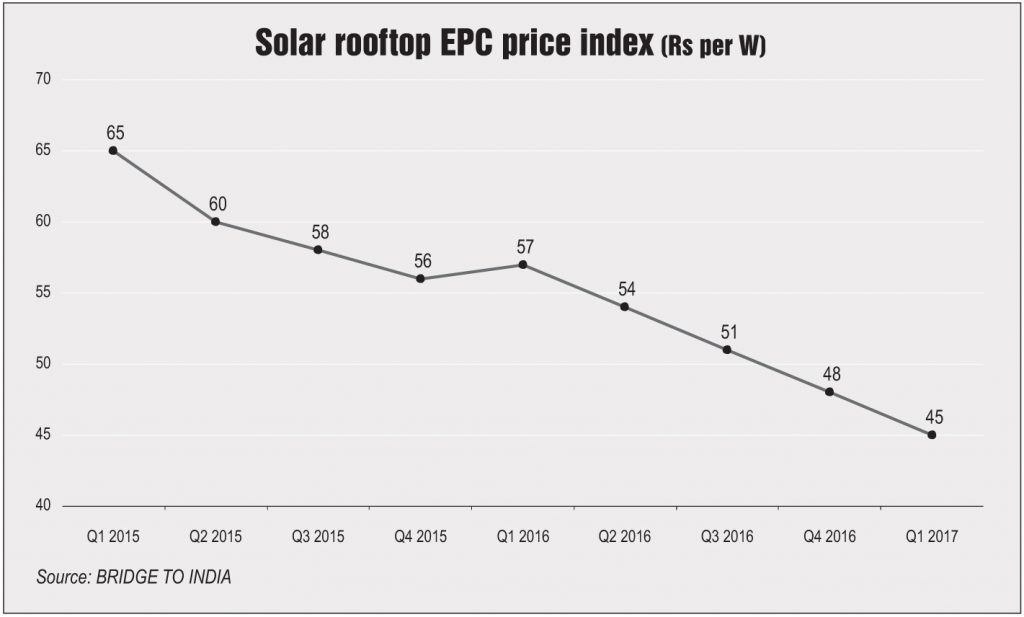 During the implementation of the Solar Energy Corporation of India’s (SECI) rooftop solar scheme, project costs have declined steadily to reach Rs 68.76 per watt in the ongoing Part 2 of Phase IV of the scheme. Rooftop solar costs have been falling due to improvement in technology, reduction in solar module costs, economies of scale with increased demand, and increase in competition. However, rooftop solar projects cost about 25 per cent more than ground-mounted solar projects owing to the technological complexity involved in setting up units on the roof of a building.

Along with overall project costs, engineering, procurement and construction (EPC) costs have also seen a downward trend in the Indian rooftop solar market. Rooftop solar EPC includes civil works, procurement and installation of equipment, and construction of mounting structures, trackers and connectors. It is the second largest cost component for rooftop solar projects, after solar modules. EPC costs for rooftop solar have been declining in tandem with the falling cost of modules and increased uptake of the technology. As the demand for rooftop solar increases, the competition among EPC companies has also increased, bringing down prices. In fact, many developers have vertically integrated into the EPC segment of the business as well. EPC prices for the rooftop category witnessed a year-on-year decline of 27 per cent in 2016-17 and a 6 per cent decline in the first quarter of 2017.

The rooftop solar segment in India is driven by two business models – the capex model, which requires the project owner to undertake the capital expenditure, and the opex model also known as the RESCO (renewable energy service company) model, which allows the owner to pay for the power drawn from the plant while the capital costs are borne by the developer. Traditionally, the capex model has been followed in the country, with a 77 per cent market share as of 2016. However, the opex model has grown significantly over the past few years, from 8 per cent in 2014 to 23 per cent in 2016. As per BRIDGE TO INDIA, the opex market grew by 114 per cent in the first three quarters of 2016, while the capex market grew by 42 per cent only. 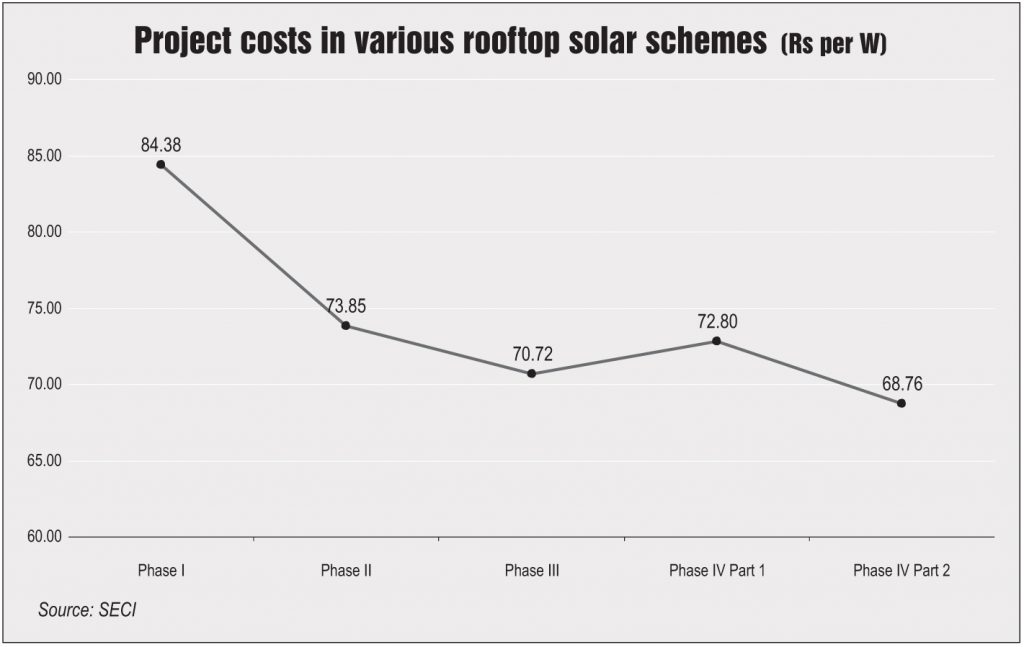 The biggest challenge facing rooftop solar deployment in the commercial and industrial segments is the resistance of discoms to the implementation of associated policies such as net metering. Given that these consumer segments significantly contribute to their revenues, the financially unstable discoms stand to lose a large part of their business to rooftop solar power generation. The interconnection process is being specified slowly by the discoms, and in some cases is long and cumbersome, often allowing only a few contractors/developers to participate.

The effective implementation of net metering will be crucial for promoting growth across these categories. However, its on-ground execution has not been impressive. Discoms are bound to oppose net metering for economic reasons and the fear of losing high-value customers, while the state electricity commissions are bound to promote the use of rooftop solar power in the country.

As a result of falling project costs, developer margins are also diminishing. The EPC market for rooftop solar comprises several players offering various products and services. Therefore, quality, safety and performance standards are needed to prevent developers from cutting corners in order to increase their profits. Also, given the increasing popularity of the opex model, particularly among industrial and commercial consumers, power purchase agreement standardisation and the legal enforcement of contracts assumes high importance.

Further, the issue of lack of finance continues to plague the rooftop solar segment. Lenders are not yet confident of investing in rooftop projects due to the low credit profile of borrowers and the quality concerns related to equipment and contractors. Meanwhile, the government needs to ensure greater clarity and certainty on the policy front, rationalise subsidies, and facilitate coordination with state agencies and entities.

There are several other teething troubles in the implementation of rooftop systems, as it is an emerging area that needs to be streamlined. These include net metering approvals, delays in approvals from discoms, large variation in solar penetration amongst discoms, and lack of appropriate software to gauge the percentage penetration of solar installations. There is also a lack of clarity on responsibility of augmentation of distribution systems. Further, there is a need to standardise the installation methodology in order to minimise the installation time for better cooling and less degradation and to reduce the cost. Other issues pertain to inspections of small-size solar installations on consumer premises, delayed approvals from municipalities or authorities, and untrained discom staff to handle emerging technologies.

Further, to increase rooftop solar penetration in the commercial and industrial sectors, awareness must be created amongst all stakeholders through strong campaigning. The rate of degradation of rooftop solar modules is higher than that of ground-mounted systems as the cooling effect is better in the latter. An initial study pointed out that rooftop installation degradation is as high as 2.5 per cent per year, as against 0.6-0.8 per cent for ground-mounted plants. A detailed survey needs to be carried out to further study the degradation pattern. 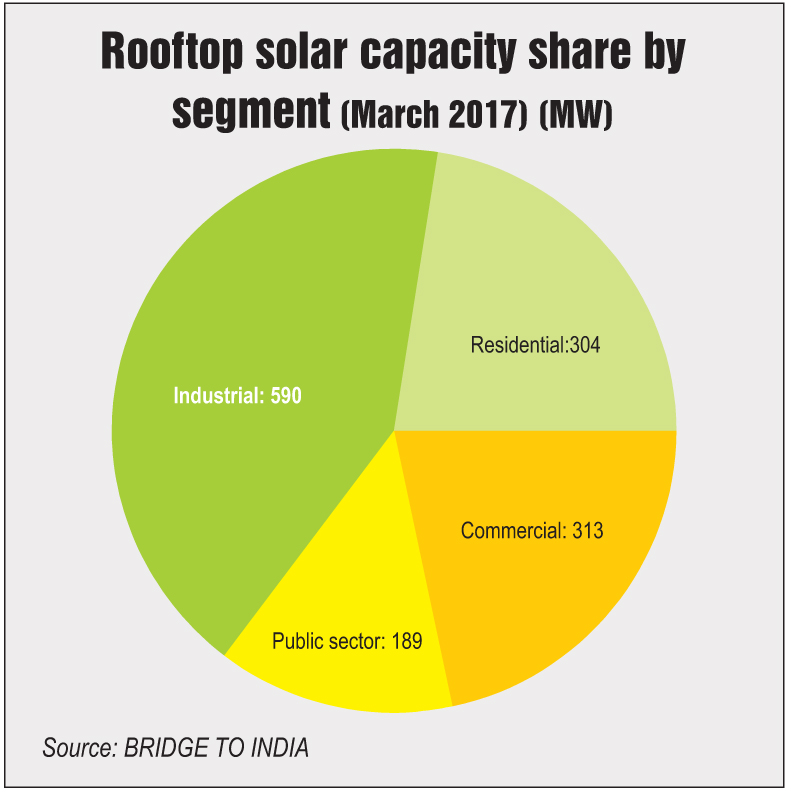 As per a BRIDGE TO INDIA analysis, by 2018, rooftop solar power is expected to gain traction in the commercial and industrial consumer segments in all states, assuming a 2 per cent tariff escalation for a 100 kW project with an estimated internal rate of return of 16 per cent. The projects are likely to yield more than 50 per cent cost savings than grid-based power projects. Considering the increase in grid-based tariffs, cross-subsidy surcharges and other applicable charges, the solar rooftop proposition is expected to witness even greater uptake by 2020, keeping all project parameters constant.

Taking into account the increasing power demand of commercial and industrial consumer categories and the high per unit tariffs prevalent in the country, the rooftop solar market is expected to grow significantly. However, the government needs to take appropriate steps in order to improve the execution of net metering policies, create better approval infrastructure and provide low-cost financing for these projects.