One of the most critical components of BoS is the solar inverter. In addition to being a vital element for deciding the transformer rating and other such significant parameters, solar inverters are responsible for a large part of BoS costs. Increasingly, technologically advanced and cost-effective inverters are being introduced in order to tap the opportunities in the Indian solar segment, which looks to add another 87 GW of capacity over the next five years.

String inverters have evolved over time, from four- and six-string systems to 12-string inverters. The new inverter systems are equipped with advanced grid features to accommodate smart grids as and when introduced into the system. Further, string inverters are modifying themselves into enhanced energy management centres with the use of sensors and weather monitoring tools.

Technological evolution has given birth to another class of inverters called modular inverters. Similar to a string inverter that is connected to a central junction box, this technology typically comprises a number of modules within one inverter. Each of these modules has independent components such as capacitors and inductors, which allow the inverter to function in the event of any component failure. The number of modules functional at any given point in time is dependent on the irradiation recorded by the system. As a result, the system usually starts with only one module that receives sunlight in the morning and the other modules get activated later as the sun charts its trajectory through the day. The auxiliary consumption of power required to start an inverter, which is typically 1 per cent of the inverter capacity, is significantly low for modular inverters. For a 1,000 kW monolithic inverter (with a single module), about 10 kW is required to start the system. However, since a 1,000 kW modular inverter is made up of 10 modules of 100 kW each, the power needed to start the module will be only 1 kW or 10 per cent of what is required by a traditional inverter. 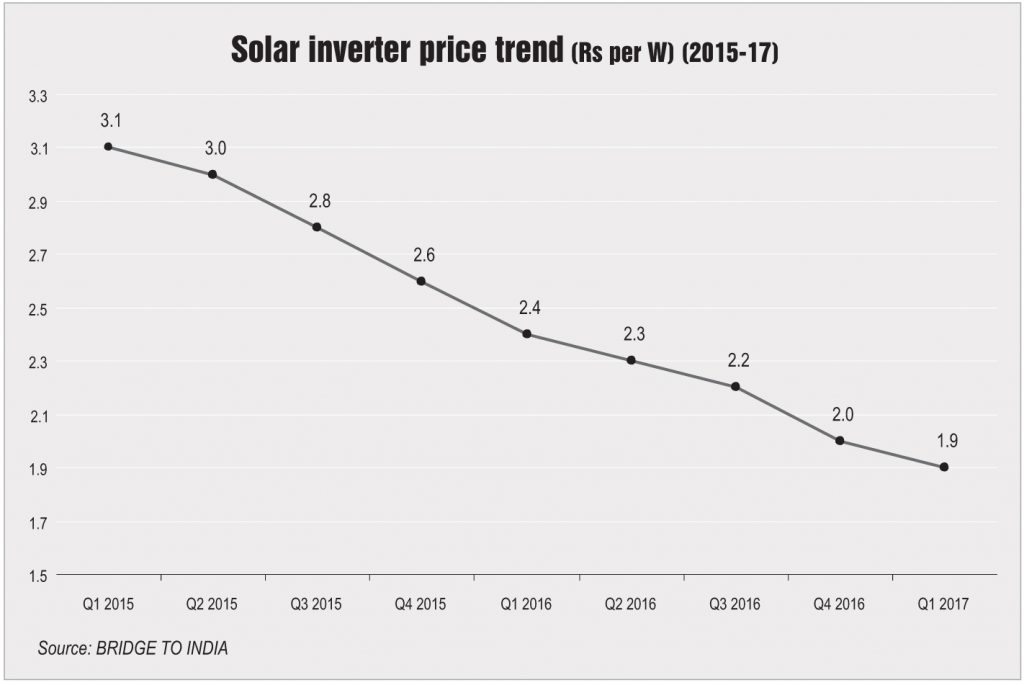 In India, the use of central inverters is predominant because utility-scale projects dominate the solar industry. The most common offering in this category so far has been the 1 MW inverters. Of late, several companies have started offering bigger inverters with capacities ranging from 1.8 MW-2.5 MW. Currently rated at 1,000 V, most companies are planning to make their new range available in India, driven by a global shift towards 1,500 V inverters.

From a taxation point of view, the effective cost of assembling solar inverters in India is slightly higher as compared to that of direct imports. There is currently a concessional duty of only 5.15 per cent on the import of fully assembled products as against 7 per cent on locally assembled products. With the implementation of the goods and services tax, this anomaly in favour of imports is likely to be removed. This will further boost inverter manufacturing in the country. 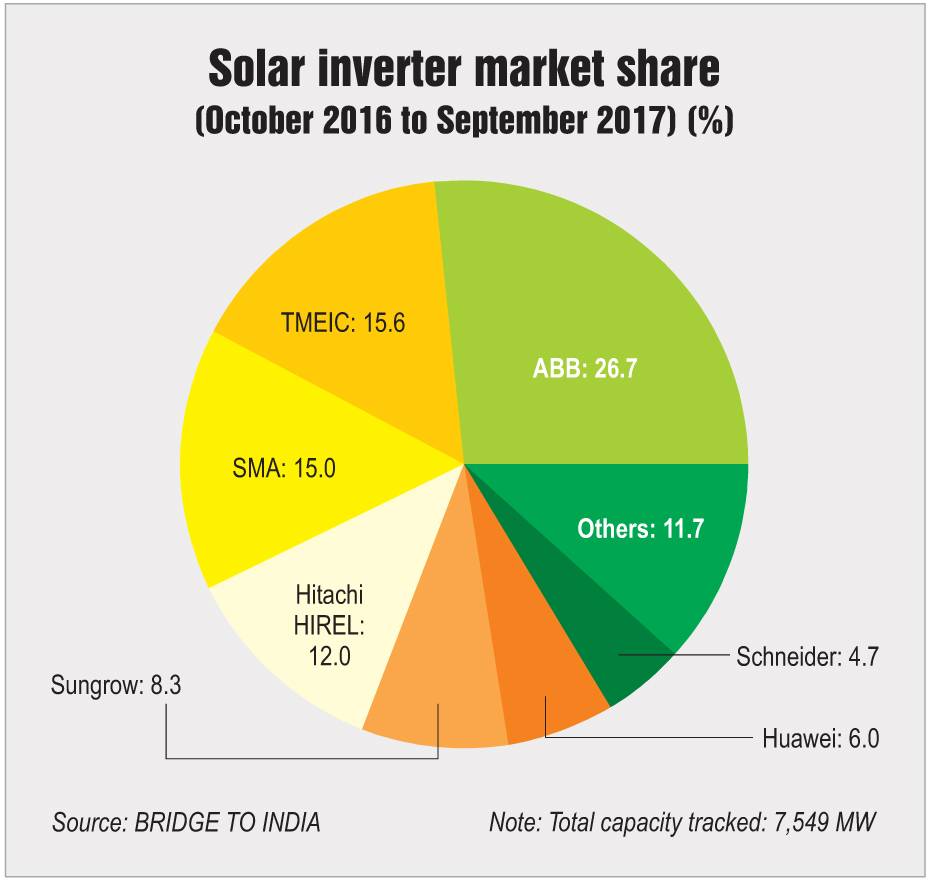 Prices have continued to fall in tandem with the fall in general capital costs in the segment. As the demand for solar equipment continues to grow, the supply is also increasing significantly, leading to a drop in prices. The competitiveness in the market has brought down prices further, encouraging investments in the segment. Inverter prices are likely to fall further, although not by a large margin.

The Indian solar inverter market is highly consolidated with the top 10 companies accounting for 95 per cent of the market. However, competition among the top companies is high, which leads to constant price revisions. Globally, in the past year, inverter prices have eroded by 17 per cent to reach $0.03 per watt for most companies. SMA and GE, however, continue to sell their inverters at a premium.

As the Indian solar space is dominated by the utility-scale segment, manufacturers are now offering higher-capacity inverters. But the shift to 1,500 V inverters is sluggish due to their high price. Despite the small installed capacity so far, the rooftop segment witnesses strong competition from inverter manufacturers as the prices are a tad higher than the utility-scale segment. Prices vary from $0.07 to $0.17 per watt, depending on the size and specifications of the installation. In the utility-scale segment, ABB, Schneider, SMA, Toshiba and Mitsubishi Electric (TMEIC), and Hitachi are the dominant players. Barring SMA, all the others now have domestic assembly units. Delta Electronics, SMA and Zever Solar, along with Kaco and Fronius Solar, are some of the top manufacturers in the rooftop segment.

According to BRIDGE TO INDIA, the country’s inverter market has been dominated by ABB, with a market share of 26.7 per cent or 2,015.6 MW installed during the period October 2016 to September 2017. It is followed by TMEIC with a share of 15.6 per cent of the total market or 1,177.6 MW installed during this period. The third largest player for the period is SMA with 1,132.4 or 15 per cent of the market share. Other notable companies include Hitachi HIREL (12 per cent), Sungrow (8.3 per cent), Huawei (6 per cent) and Schneider (4.7 per cent).

Going forward, as the country pushes to meet its solar capacity addition targets, the demand for solar inverters is expected to rise proportionately. There will be an increase in demand in the utility-scale segment, including medium-scale, large-scale and ultra mega power projects, as well as for rooftop, decentralised and off-grid installations. Easy-to-use and modular-styled microinverters will also foster future growth. Moreover, the Indian market is likely to become less concentrated with several new domestic and international players looking to enter this space.