They rose suddenly against the barren landscape as we rounded the last bend in the road. Giant white windmills 120 metres tall, tilting against the blue sky, their shiny blades slicing the air and setting up a deep-throated hum as the wind whipped up the slope…

We were visiting the 100.8 MW wind farm of Mytrah Energy, a leading independent power producer (IPP) operating in the wind and solar energy segments. A two-hour long drive from the Mytrah headquarters in Hyderabad took us to the wind farm, the latest addition to the company’s series of wind farms, spread across 189 acres in a 15-km radius covering 13 villages in the remote countryside of Nazeerabad.

After changing into protective gear at the start of the tour, we were put through a short health and safety training by the site manager. A detailed presentation followed on the company and the wind farm, giving us an overview of its operations.

The Nazeerabad wind farm was constructed in about nine months and was commissioned in March 2016. The turbines were provided by Suzlon, while the balance of plant was installed by Mytrah. The wind farm comprises 48 units of the S97 type wind turbines, with a rated capacity of 2.1 MW each. The farm has five feeders, of which two are connected to 11 wind turbines each, one to 12 turbines, one to six turbines, and one to five turbines. As opposed to the traditionally used pure steel or concrete towers, Mytrah has used a unique blend of steel and concrete to create hybrid towers at the wind farm. These towers are 120 metres high, with the concrete lattice going up to 70 metres and the remaining 50 metres being of steel.

The company has deployed smart turbines at the wind farm with state-of-the-art sensory technology. The turbines also provide three different types of rotations. The yawing rotation of the hub ensures optimum generation regardless of the direction of the wind. The pitching of the blade tips helps control the turbine’s rotation speed by rotating the angle of attack of the blades exposed to the wind. The third kind of rotation refers to generator torque, which controls the rotor speed to generate the maximum amount of power.

Power generated from the wind farm is bought by Telangana State Southern Power Distribution Company Limited at a price of Rs 4.7 per unit as per the power purchase agreement (PPA) signed with Mytrah. Amid the challenge of backing down of power plants and reneging on PPAs, the Nazeerabad wind farm stands tall as it has not once been asked to curtail production, nor have there been any talks of PPA renegotiation. The wind farm has one of the lowest line losses of only 2.3 per cent, as the power is transmitted to a pooling substation located about 3.5 km away. Built at a cost of Rs 60 million-Rs 70 million, the company is expected to recover its investment it with a payback period of seven or eight years at current tariff levels.

The company secured financing of $1 billion during 2016. In September 2017, the company raised $277 million from the Piramal Group in the form of non-convertible debentures, which will be used to fund the exit of early investors such as IDFC Investments, AION Capital, Merrill Lynch and Goldman Sachs from the company. 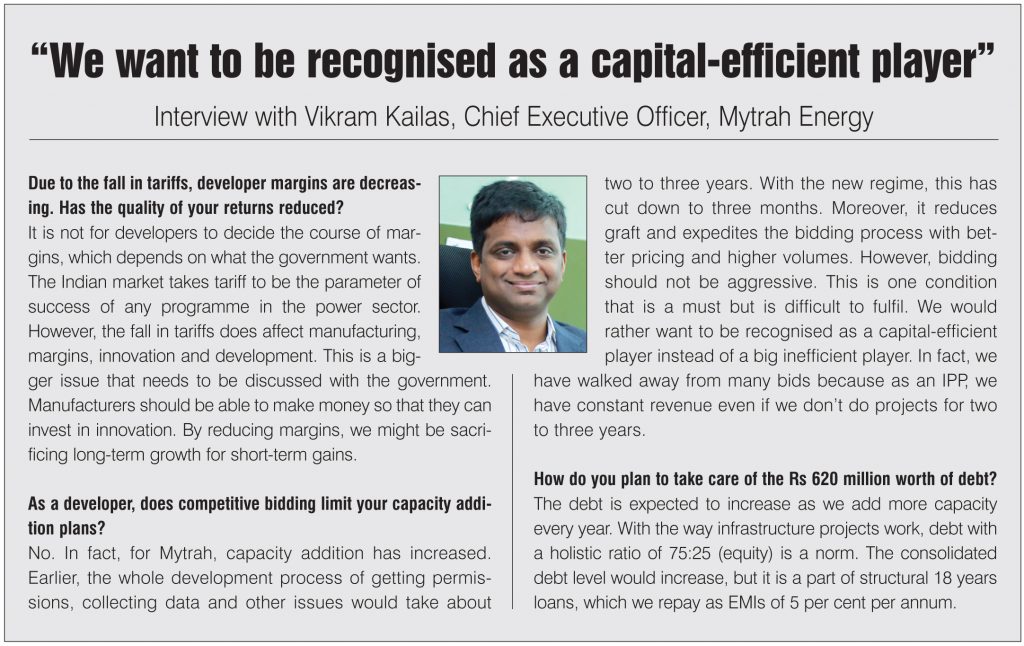 Mytrah is now diversifying from a power generator into a service provider. At the company headquarters, we were taken to a cold room with a large screen comprising several smaller panels with numbers flashing on them. This, we were told, is the company’s technologically advanced asset management and monitoring system, known as the generation monitoring centre (GMC), which has been developed entirely by Mytrah’s personnel. It provides macro- and micro-level details about the company’s portfolio on the screen along with real-time PLF ratings of the turbines. In addition, Mytrah uses analytics to predict maintenance and identify issues based on generation patterns. This helps in significantly reducing the downtime of plants and boosting generation.

The GMC enables significant performance improvement as it constantly monitors and analyses the actual production against the target specified. Further, the power curve guarantee test and the detailed reporting system provide deeper insights into asset operations. In addition, continuous real-time monitoring and control of assets help the generator detect failure in advance. Moreover, the complete system can be accessed through mobile applications, and multi-level email and message notifications sent to the concerned personnel for the escalation and immediate resolution of issues. 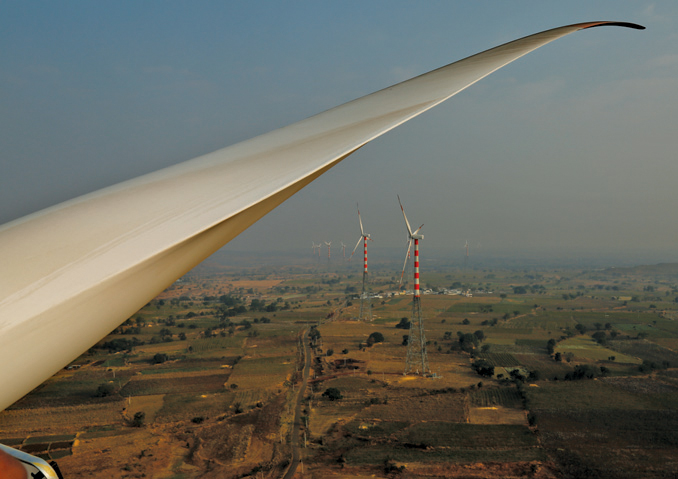 Mytrah has emerged as an innovative solutions provider in the Indian renewable energy space. With the recent influx of Rs 18 billion of funds from the Piramal Group, the company has managed to raise capital without diluting equity. It also has plans to come out with its initial public offering next year. With about 4,000 MW of wind power projects in the pipeline, the company is poised to take advantage of the change in regime from feed-in tariffs to competitive bidding. In light of the funds influx, ambitious expansion plans and favourable renewable energy ecosystem, Mytrah Energy is expected to continue on its growth trajectory.