Not long ago, after sunset, it was difficult to even imagine that a hamlet of over 150 people existed in Hata block of Kushinagar district in east Uttar Pradesh. Now, the village can be seen from afar even in the dead of night with solar street lights and LED lights illumining the village. It was only last year that Chilwan Tola was selected by a social business venture for the installation of solar microgrids for providing electricity. Not connected to the conventional power grid till date, each of the 30 households in this hamlet now enjoys solar power and a facility to charge their mobile phones.

Dependent on kerosene wick-lamps or “laltens” for lighting up his small house all his life, 60-year-old Dhruv Narayan Singh says that experiencing bright light from a bulb was indeed novel for him. “Life has since changed in more ways than one,” he says.

The Mrida Group, a start-up with corporate social responsibility (CSR) funding from Mahindra and Mahindra, embarked on a programme, “Energy Access as a Tool for Holistic Rural Development”, in 2015-16, in the unelectrified villages of Kushinagar.

Eleven villages have been covered so far under the programme in this district. In all, there are 18 microgrids for 259 households and 69 street lights in these villages. Energy access includes lighting and a mobile charging facility for households, and street lights, solar-powered e-hubs and battery-run rickshaws wherever necessary and viable. The revenues earned from providing electricity are ploughed back into livelihood initiatives to raise the income level of villagers.

The villages that were selected are not connected to the conventional power grid. The other criterion was to include households at the bottom of the pyramid in terms of social and economic standing. The number of microgrids installed in a village depended on the number of households and their spread.

Each of the solar microgrids installed in these villages has the capability to electrify 25 households within a radius of 80-100 metres. The cost of each of the microgrids was about Rs 110,000.

The solar charge controller is connected to a laptop through a cable and the entire information about the system is accessed through it – when was it switched on/off, was there any overload, was there any deep discharge in the battery and, if so, how was it rectified, etc. The upgraded monitoring system that is being worked out will be operated through remote control. This will include operations like switching the system on/off and looking at faults, if any.

The household that takes care of the maintenance and safety of the microgrid or provides space for it gets an extra light. The grid provides power for nearly six hours on a daily basis, four hours after sunset and one and a half or two hours before sunrise. The idea is to provide electricity during the time of optimal consumption by families. This allows children to study till late in the evening and early in the morning.

Nandu, a student of Chilwan Tola, told Power Line that he and other students have been getting extra time to study ever since the microgrid has been installed. Chhaya of Class VI in Lehni II village said she had been able to improve her rank in the class. “The women too do not have to struggle to cook their meals in the dark or finish their chores before sunset,” said Janaki, a resident of the same village.

The number of street lights in a village range from 3 to 10 depending on the size of the hamlet and the households covered.

The solar street lights have dust-to-dawn controllers that allow the lights to be switched on automatically after sunset and switched off after sunrise. The street lights are a part of the company’s CSR initiative but an agreement has been signed with the villagers for maintenance and upkeep over a period of time. “With street lights, people are able to move around in the village without fear and the number of insect bites have also come down,” said Ram Swarup of Chilwan Tola.

Although funding comes from the sponsoring company’s CSR for infrastructure, the overriding principle is “nothing for free, no subsidies and self-sustainability”. Engaging the community at every stage and building local leadership are essential components of the programme to ensure sustainability. To achieve this, a village development committee (VDC) is elected from among the villagers. The VDC is assigned the responsibility of maintaining accounts and collecting payments for getting connections to the grid (the amount is nominal) and monthly charges from the beneficiary household s for two LED bulbs and a mobile charging point per household. A separate bank account has been opened for the village development fund. The VDC is responsible for managing the microgrid as well as the funds used for grid maintenance and other development initiatives. Although training is provided for the purpose, a manager (operations) and a technician are appointed by Mrida to oversee the programme on the ground.

Take the case of Lehni II hamlet in Hata block. Surprisingly, while Lehni I, just a kilometre away near the highway, is connected to the power grid, this small village that has mostly scheduled caste population has been left out. Now, all the 28 households in Lehni II receive power from the two solar microgrids installed there. Each household pays Rs 75 as monthly charges, in addition to the money they paid initially for getting the connection. The microgrids were installed in July last year and the VDC corpus on date is Rs 24,000.The corpus is meant for the maintenance of the programme, and can be utilised for replacing the battery of the microgrid when required or for livelihood initiatives undertaken by the VDC. In Lehni II, the women get paid for weaving baskets from a variety of wild shrubs like Rara, Gooja and Chhedana grown locally. Mrida also helps in marketing these products. A month of free electricity for a month is an initial and additional incentive that is offered to these women. 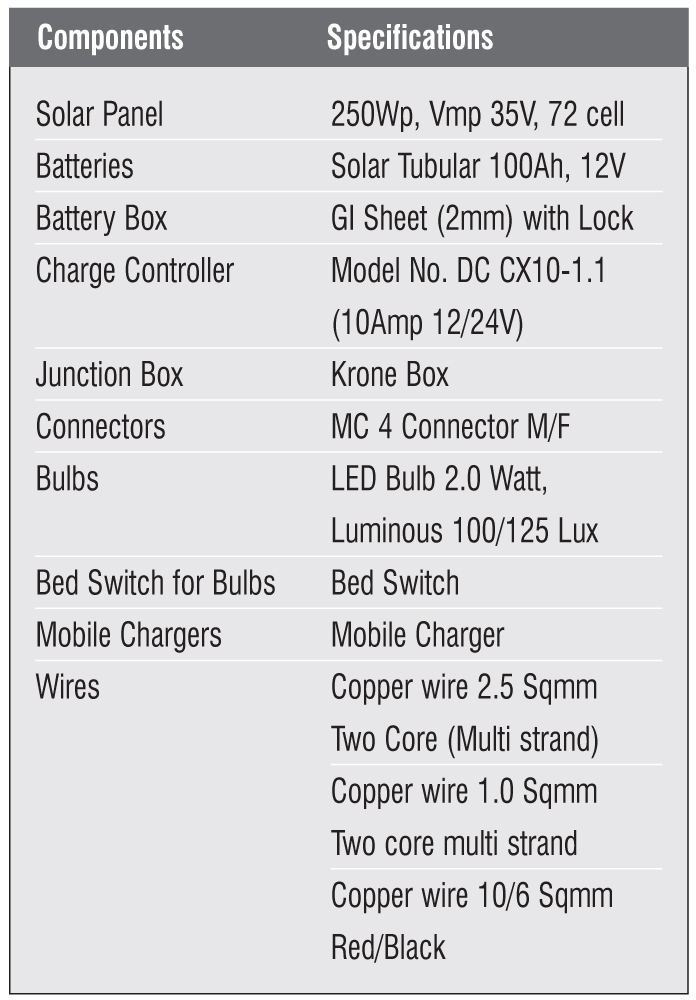 Since there are no radios or TV sets in these hamlets, the only source of entertainment is cell phones, be it listening to music, chatting with friends or watching movies (for those who have smartphones). The good thing is now mobile phone batteries can be charged at home. “Now no one has to pay for getting their mobiles charged from the market,” said Chander Shekhar, who heads the VDC in the village.

With lights in their homes and earnings from basket weaving, the women in the village are craving for more. One of them, Champa, joins others in asking for more connections. “Ujala ho gaya hai (we have got lights); we now want facility for using a fan and TV.” According to Rahul Gupta, manager, corporate finance and strategy, the Mrida Group, once the income level of the people improves through the livelihood initiatives, this can be done by upgrading the system.

The three-fold objective of starting the solar-powered e-hubs in these remote and unconnected villages was educating children, entertaining villagers and providing e-commerce services for the benefit of the people. These e-hubs are run by village-level entrepreneurs (VLEs) chosen from among the youth of the village. The cost of each e-hub comes to nearly Rs 250,000.

One such e-hub is in Chakhni Bhumiyari Patti village. Nitish Kumar, a BCA student, from a nearby village, was chosen to run the facility. Kumar says he made a down payment of Rs 15,000 and is paying an equated monthly instalment (EMI) of Rs 1,500 a month. The proceeds of the EMI go to the VDC. He has rented a room on the roadside of the village where a 250 AC watt solar panel has been installed. Also connected to the village microgrid, the e-hub has an internet connection, a smart inverter, a laptop, a multi-functional printer and an LED projector. The projector has a built-in interactive learning curriculum with animated audio-visual CBSE school content for math, science and environmental science in Hindi and English from kindergarten to Class 12. Currently, Kumar has about 11 students whom he teaches through this audio-video facility as soon as the village microgrid is switched on after sunset. The students pay a monthly fee of Rs 50. The projector is also used for screening documentaries, community awareness programmes and movies. Kumar says he recently screened the movie, Toilet – Ek Prem Katha, for the villagers.

But his main earnings come from the e-commerce services he provides to people of his and neighbouring villages. Although to start with he was expected to mainly provide printing and photocopying services, the enterprising 21 year old has learnt to do much more. Villagers now depend on him for filling online forms for various purposes, downloading details of government schemes they are entitled to, lamination, projector booking, data entry, and typing and printing of marriage cards. “I have been able to learn Photoshop, the and several other software from YouTube because of this facility,” he says. Kumar hopes to start online booking of train and bus tickets but though he currently does not have the required savings in his bank account to do so. e-rickshaw 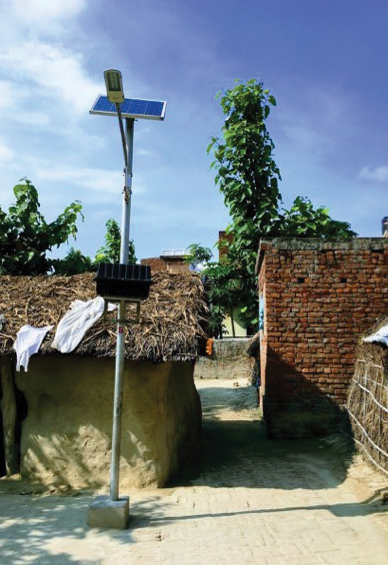 A number of villagers are employed as daily workers in nearby kasbas. With no public transport available, they have to walk several kilometres to reach the road-head from where they get some sort of transport. In order to help them and keep the environment clean, Mrida came up with the idea of providing e-rickshaws. One such e-rickshaw is run by Ram Rakha of Jhajhawa village, where two microgrids have been installed for providing electricity to the 30 households. His rickshaw plies between Jhajhawa and Kaptanganj. Ram Rakha has to pay an EMI of Rs 1,500 per month, which is deposited in the VDC account. He is able to earn Rs 250 to Rs 300 per day but, more importantly, the villagers’s commute has become much smoother with the e-rickshaw. Ram Rakha, who at one time lived from hand to mouth, has been able to clear his debt and buy a second-hand tempo andHe  educate his children.

According to Mrida, the energy access programme in Kushinagar district has helped in reducing kerosene consumption by 7,024 litres, thus reducing 17.56 tonnes of carbon dioxide (CO2) till date. There is an annual potential to save 4,622 litres of kerosene and reduce CO2emissions by 11.66 tonnes. The programme has impacted the lives of nearly 2,500 people in over 400 households and generated a number of livelihood initiatives in Kushinagar. Social and economic empowerment, a clean environment, and energy access are important components of the programme says Arun Nagpal, co-founder of the Mrida Group. According to him, to take this further, the VLE-based model is also being explored. Under this, Mrida could initially finance the setting up of solar microgrids with some down payment from willing village entrepreneurs, who could take up the activity of electrifying the villages. Break-even could be achieved in three years, says Gupta. Thereafter, the entrepreneur can earn profits and create a corpus for the sustainability of the programme.

In Uttar Pradesh, nearly half of the rural households still do not have access to electricity and though this venture’s contribution may be a drop in the ocean, it has made a difference to the lives of at least some people living in interior villages of India’s heartland.