With the constantly evolving ecosystem of the Indian renewable energy market, financial instruments too have developed over the years. The government envisages an investment requirement of $100 billion to realise the renewable energy targets over the next five years. Access to capital, which was once a challenge for the fledgling market, has now become a key driver for sector growth, owing to the low interest rates and longer tenors. Further, record capacity additions and steeply falling tariffs that guarantee power offtake by discoms have significantly increased investor confidence. This, in turn, has made way for newer financial instruments, especially in debt financing.

In the first seven months of 2017, India’s green bond issuance reached $2.1 billion, including $1.5 billion raised by the Greenko Group and Azure Power together in just two weeks in July. The amount is enough to fund the debt of over 3.5 GW of renewable energy projects. Green bonds are debt instruments for climate-focused investment solutions that have helped reduce the overall cost of funds. These bonds are particularly useful for institutions such as the Green Climate Fund, the Green Investment Bank and the Indian Renewable Energy Development Agency (IREDA), which are mandated to invest in only clean energy options.

In 2016, the cumulative global valuation of green bonds since their inception in 2007 reached $180 billion. The annual issuance peaked in 2016 at $81 billion, nearly double that issued in the preceding year ($41 billion), indicating a rapid increase in the availability of debt capital for renewable energy projects across the globe. Despite having entered the market fairly recently, India has emerged as one of the largest green bond markets in the world, driven by favourable policies and an evolving business environment.

The first green bond in India was issued by YES Bank in 2015. Since the issuance of its $3,300 million bond with a term of seven years, several public and private companies have issued bonds. Noteworthy among these are masala rupee bonds worth Rs 20,000 million issued by NTPC in October 2016. These bonds have a five-year maturity and an interest rate of 7.48 per cent. NHPC issued corporate bonds worth Rs 45,000 million, while Axis Bank issued maiden green bonds of $500 million in June 2016. The market grew to cumulatively reach $2.7 billion in 2016, making India the seventh largest green bond market in the world.

On the flip side, Continuum, backed by Morgan Stanley, failed to raise capital for its $400 million bond due to the weak profile of its customers that mainly comprise financially poor discoms. This indicated the inherent challenges associated with the green bond and renewable energy markets in India. The credit profile of customers, therefore, assumes significant importance while raising capital through bond issues. The greater the risk associated with customers, the lower will be the credibility of the debt bond.

Another emerging debt instrument, yieldcos, are bonds for the pooled operational assets of a company. For instance, all the assets of a company, irrespective of their size, location and type, can be pooled together to issue bonds that can then be subscribed to by financial institutions. This helps reduce risk as the bond is issued against the company’s portfolio instead of a particular project, thereby reducing subscription costs considerably.

Borrowing capital for renewable energy projects is no longer restricted to domestic banks; multilateral banks and non-banking financial institutions (NBFCs) too are looking to invest in the Indian market. Multilateral banks typically offer low-interest loans as compared to domestic banks. The tenor of capital borrowed from these banks is usually 15-18 years against 7-8 years provided by Indian banks. Also, the involvement of international banking entities improves the credibility of projects, further increasing investor interest. In the past year, 24 deals have been signed between companies and commercial lenders, a key deal being the one between the Asian Development Bank (ADB) and the World Bank Group. ADB gave a $390 million loan to ReNew Power and another Rs 11,375 million to Mytrah Energy Limited (on a project finance basis). It also provided a $1 billion loan to Power Grid Corporation of India Limited for strengthening its grid infrastructure. In an institution-to-institution deal, ADB loaned another $200 million to IREDA, which provides low-interest capital for renewable energy development.

The World Bank Group has provided loans of $1.02 billion to the Indian government, in addition to $625 million to the State Bank of India (SBI) as a long-term loan exclusively for the development of the renewable energy sector. Germany-based KfW has given loans worth Rs 3,000 million each to the Kerala and Maharashtra governments for the development of two large floating solar park projects with a total capacity of over 40 MW. The bank has given another $1 million as a soft loan to the Government of India for investment in green projects. Moreover, the New Development Bank (erstwhile BRICS Development Bank) has provided Canara Bank with loans worth $250 million for investment in the sector.

Considering the growth of the renewable energy sector, private NBFCs have emerged as significant lenders. This increases the competitiveness of debt capital, thereby improving the terms of borrowing from these entities. Some of the new NBFCs are Tata Cleantech Capital, a joint venture between Tata Capital and IFC; and SREI Infrastructure Finance Limited (SIFL).

Among domestic commercial borrowings, IDFC has granted loans worth Rs 6,750 million to Solairedirect Energy, while the National Bank of Agriculture and Rural Development has loaned Rs 2,050 million to the Rural Infrastructure Development Fund of Haryana. Another prominent deal is the one between the Abu Dhabi Investment Authority (ADIA) and Greenko Energy Holdings for loans worth $230 million. Greenko secured another $155 million in loans from ADIA in partnership with GIC Private Limited (earlier known as the Government of Singapore Investment Corporation).

An emerging debt-based financial instrument is the credit guarantee scheme. This involves a third-party credit guarantee agency assuming the post-construction project performance risk and insulates the lender from payment delays and defaults, thereby guaranteeing its return on investment. This is helpful in the Indian context as the discoms’s poor financial health is resulting in reduced investor interest in the renewable energy sector. It enables financial institutions to extend loans or invest in bonds at competitive prices.

India is expected to require capital worth $20 billion per annum for the next five years to achieve its renewable energy target of 175 GW by 2022. The evolution of debt financing over the past year has set the pace for the realisation of these targets by significantly reducing the cost of capital. Moreover, competitive interest rates with longer tenors have lent considerable credibility to debt financing instruments. However, real-time challenges pertaining to the grid integration of renewable energy and the backing down of solar power plants despite having a “must-run” status continue to exist. Focused  government policies and favourable developments amidst improvements in the renewable energy space have reduced the risks associated with green projects. Meanwhile, owing to low tariffs, the offtake of renewable power has improved and the issue of discom payments is being resolved through multiple measures by the government, thereby improving investor confidence in the sector. In this context, debt instruments such as green bonds are expected to gain traction in the market, while commercial borrowings from domestic and international multilateral organisations are likely to increase over the next few years. 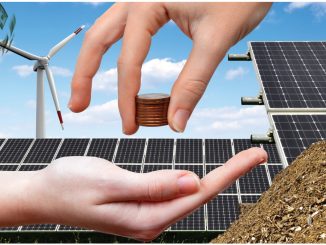 November 4, 2017
India’s installed renewable energy capacity currently stands at a little over 60 GW. While technological advancements and a progressive policy and r...
More