India is the third largest consumer of energy in the world and the second largest in Asia. According to the Global Energy Statistical Yearbook 2017 by Enerdata, India’s consumption grew by 4.6 per cent in 2016. British Petroleum’s Energy Outlook estimates that the country’s energy demand is set to increase by a substantial 129 per cent during the period 2015-35, growing at 4.2 per cent per annum. In comparison, energy consumption is projected to grow by only 1 per cent in the US and by 47 per cent in China during this period. An increase in energy consumption is a direct consequence of the growth of industrialisation in a country, thereby making it a strong indicator of carbon emissions and greenhouse gas pollution. Given India’s climate change commitments as per the Paris Agreement and its Intended Nationally Determined Contributions, demand-side management assumes high significance in the scheme of energy resilience. In addition to its focus on supply-side management of energy through the increased deployment of renewable sources, the government is promoting energy conservation and efficiency.

To this end, the Bureau of Energy Efficiency (BEE) has released the Energy Conservation Building Code (ECBC) 2017, which prescribes energy performance criteria for new commercial buildings. The ECBC 2017, which was launched in June 2017, has been developed by the Ministry of Power along with BEE. The ECBC stems from the Energy Conservation Act, 2001, which empowers the central government to prescribe regulations and direct buildings to comply with energy conservation building codes. The code is released annually with updates, enforcement directions and targets for commercial buildings. The fundamental purpose of the code is to provide guidelines for energy efficient design and construction of new buildings. It has incremental requirements for buildings, over and above the minimum requirements.

The scope of the ECBC 2017 extends to commercial buildings or building complexes with a connected load of 100 kW or greater, or a contract demand of over 120 kVA. The code does not apply to residential buildings. The energy efficiency performance levels apply to the building envelope, mechanical systems and equipment, including heating, ventilation, air conditioning, service hot water heating, interior and exterior lighting, electrical power and motor systems along with renewable energy systems.

Commercial buildings that need to comply with the code have been classified as per the functional requirements of their design, construction and use.

The energy performance index (EPI) calculated as the division of the annual energy consumption in per unit of power (kWh) by the difference between the total built area and the up area (EPI = annual energy consumption [kWh]/(total built area – up area]) is the determining factor for compliance. Exact compliance by a building is calculated as the EPI ratio, which is essentially the ratio of the EPI of the proposed building and that of the standard building. The proposed building here is defined as an entity that is consistent with the design of the building and complies with all mandatory ECBC requirements. According to the EPI ratios, three compliance levels have been defined (see Table). 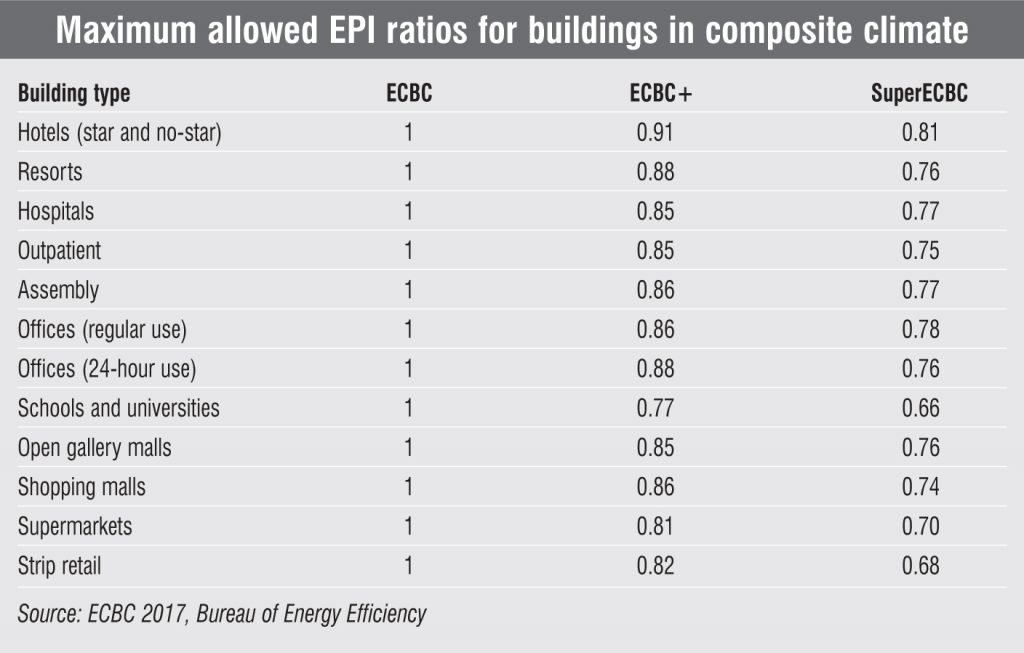 Compliance requirements are provided for the full building as well as the core and shell building. While the former complies with the complete provisions of the ECBC, the latter refers to compliances for the building envelope, thermal comfort systems, lighting systems and controls, electrical systems as well as renewable energy systems. The ECBC also defines codes for additions and alterations to existing buildings. Compliance is verified based on the following categorisations:

Building-integrated photovoltaic (BIPV) systems are a smart way to ensure both demand- and supply-side management within the same building. These include PV components that can be used to replace conventional building material in parts such as the building envelope, roofs, skylights and facades. BIPV is becoming increasingly popular across the world, and especially in countries like India that have high energy consumption and low management. In light of new building codes that put greater emphasis on energy efficiency, BIPV can help make buildings ECBC-compliant while reducing the net energy demand.

They are increasingly being incorporated into the construction of new buildings as a principal or ancillary source of power.  Existing buildings may also be retrofitted with similar technology. The advantage of integrated PV cells over the more common non-integrated systems lies in the initial cost that can be offset by reducing the amount spent on building material and labour that would normally be used to construct the part of the building that the BIPV modules would replace. These advantages make BIPV one of the fastest growing segments of the PV industry.

Through the ECBC, the government intends to ensure energy management in commercial establishments, which are among the largest consumers of energy in the country. The adoption of ECBC 2017 for new commercial buildings is estimated to result in a 50 per cent reduction in energy use by 2030. This translates into energy savings of about 300 billion units by 2030 and a peak demand reduction of over 15 GW a year, equivalent to expenditure savings of Rs 350 billion and 250 million tonnes of carbon dioxide reduction.

For real success, however, ECBC compliance needs to be monitored, and incentivised or penalised as required. The government could take a cue from various European countries that offer incentives for following the stipulated codes. Some cases in point are France (which offers Euro 0.25 per kWh), Germany (which provides Euro 0.05 per kWh), Italy (Euro 0.04-Euro 0.09 per kWh), the UK (6.38-13.39 pence per kWh) and Spain, (which gives Euro 0.28 per kWh). In India, as the implementation so far has been sketchy, incentivising compliance and putting strict legal provisions in place could be the country’s answer to improving energy efficiency and climate resilience.

The battle against climate change is being fought on two major fronts – clean energy supply and energy efficiency. As India continues to expand its renewable energy capacity to achieve the specified targets, the dialogue […]

Solar Homes: BIPV yet to build a strong foundation

Interest in building-integrated photovoltaics (BIPV), wherein PV modules are utilised as the roof, facade, walls, windows and sunshades of buildings, is growing worldwide. This is partly because of the emphasis on sustainable green buildings and […]

A growing focus on energy efficiency has put pressure on researchers and market players to incorporate energy-efficient technology into the existing and new infrastructure. Passive design features that maximise energy efficiency can be added to […]