Owing to significant capacity additions in the past few years and a steady reduction in transmission and distribution losses, there has been a marked improvement in the power supply situation in Maharashtra. Today, the state has the highest installed power generation capacity of around 42 GW in the country. As per the Central Electricity Authority, the state is likely to have a power surplus of 14.8 per cent in 2017-18, with an anticipated peak power requirement of 20,700 MW and availability of 23,765 MW.

The share of thermal sources in the installed generation capacity in Maharashtra stands at 74 per cent. At the same time, the state is laying strong emphasis on harnessing its huge renewable energy potential. Among all states, it is second only to Tamil Nadu in terms of installed renewable capacity generation. The installed renewable energy capacity base is mainly contributed by wind energy projects, and the balance is from biomass/bagasse-based cogeneration plants, small-hydro projects (SHPs) and solar projects.

The new policy provides several incentives for setting up renewable energy projects in the state. For instance, all projects set up under the policy are exempt from supervision charges for grid evacuation. Further, projects are given concessions for obtaining a no-objection certificate from the Central Pollution Control Board. SHPs and cogeneration and biomass-based projects are exempt from paying electricity duty for captive power plants for 10 years from the date of commissioning of the project. Solar power projects with a capacity of up to 2 MW are given a 50 per cent discount on land rent/lease charges, and the process of land acquisition is governed by the state’s land acquisition act. Similarly, for setting up manufacturing facilities for solar modules, panels, etc., government land, if available, will be provided at 50 per cent discount on lease/rent. Further, under the policy, Mahagenco has been mandated to provide a subsidy of Rs 50,000 per kW (with a maximum of Rs 10 million) from the Green Energy Fund to SHPs. For bagasse-based cogeneration projects, Mahagenco has been made responsible for the basic infrastructure and evacuation. As for biomass-based power projects, Maharashtra State Electricity Transmission Company Limited and Maharashtra State Electricity Distribution Company Limited will help developers with grid evacuation. The policy also seeks to promote repowering of old wind sites.

The Maharashtra government has recently approved a policy on energy conservation, which seeks to save 1,000 MW of power in the next five years. It emphasises using natural resources and reducing the use of energy generated from coal, besides making it mandatory for new buildings to have solar panels installed.

Despite the government’s thrust on wind energy, the segment witnessed very limited development in the past few years. For instance, the state added only 12.2 MW during the first nine months of 2016-17 to the existing 4,653.83 MW (as of end-March 2016). This was mainly on account of the non-signing of power purchase agreements (PPAs) for wind energy projects.

In the past three years, 450 MW of wind generation capacity has remained unused, with Maharashtra State Electricity Distribution Company Limited (MSEDCL) reluctant to buy power at high prices from developers who had completed their projects. These capacities stood the risk of turning into non-performing assets by end-March 2017. However, in a major relief to the developers, in March 2017, MSEDCL announced that it would resume signing PPAs with wind developers in the state. The discom said that it would proceed in chronological order, beginning with PPAs being signed first with those developers whose commissioned projects have been waiting the longest. The state has now decided to award wind energy projects only through competitive bidding.

Maharashtra receives an average solar radiation of 4-6 kWh per square metre per day and has an estimated solar power potential of 64 GW. However, it has been unable to utilise its vast solar potential, with only 430.46 MW of solar capacity being installed as of end-January 2017. Hence, while the state has been successfully meeting its overall renewable purchase obligations (RPOs), it has been unable to fulfil its solar RPO.

In January 2016, the Solar Energy Corporation of India (SECI) conducted an auction for 500 MW of solar capacity in Maharashtra under the viability gap funding (VGF) mechanism. While seven developers won the tender by bidding at Rs 4.43 per kWh with varying levels of VGF, the eighth one bid a lower tariff of Rs 4.41 per kWh without VGF. The tariffs discovered in the auction were, however, higher than the record low tariff of Rs 4.34 per kWh achieved in the auction in Rajasthan in the same month. Industry experts attributed the slightly higher tariffs in Maharashtra to the tendered capacity being outside solar parks, the smaller capacity projects and the fact that the offtaker was SECI as opposed to NTPC.

Going forward, Maharashtra is looking to undertake significant capacity additions in the solar space. The state has sanctioned three solar parks of 500 MW each, of which one is being developed by Mahagenco in Dhule district and the other two, the Guru Mega Solar Park and the KP Solar Power Park, by private developers. It will invite bids for 400 MW of solar projects at the Mahagenco solar park in July-August 2017. Bids for the remaining 100 MW will be invited later. For the other two parks, the land acquisition process is under way. The state has also rolled out a scheme to provide solar energy feeders to farmers for running agricultural pumps. As a pilot project, it has invited bids for two such projects of 2 MW each. The scheme will be scaled up if the pilot proves to be successful.

The Maharashtra Energy Development Agency is actively promoting bagasse-based cogeneration in the state’s sugar mills for surplus power generation. In addition, the MERC has been offering attractive tariffs for cogeneration power projects from time to time. The prevailing regulated tariff, which was declared by the commission in April 2016 for cogeneration projects is Rs 6.73 per unit. 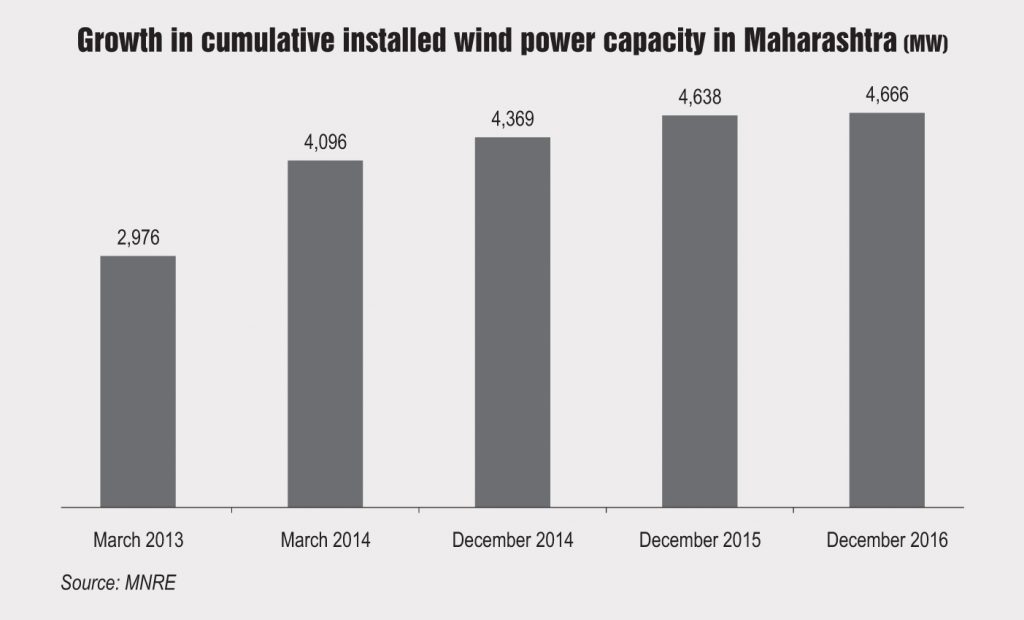 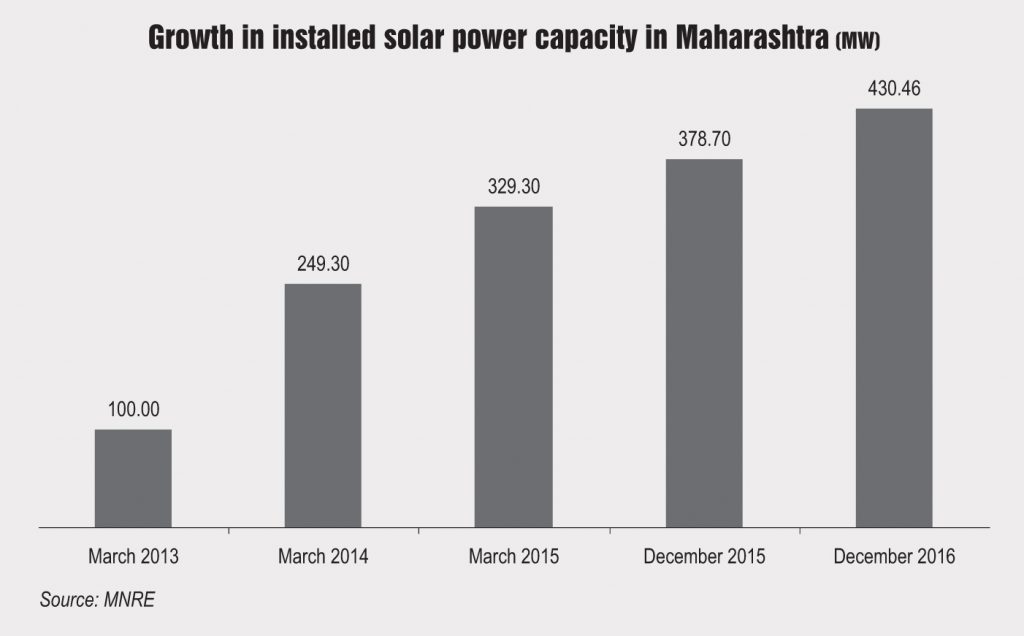 As part of the central government’s target to achieve 175 GW of installed renewable power capacity by 2022, Maharashtra has been allotted targets of 11,926 MW of solar power, 7,600 MW of wind, 50 MW of small-hydro and 2,469 MW of biomass-based power. Further, in line with the national long-term growth trajectory of RPOs for solar and non-solar energy from 2016-17 to 2018-19, the MERC has fixed the RPO target for 2016-17 at 11 per cent, with the solar and non-solar components standing at 1 per cent and 10 per cent respectively. The RPO target will increase gradually to reach 15 per cent by 2019-20.