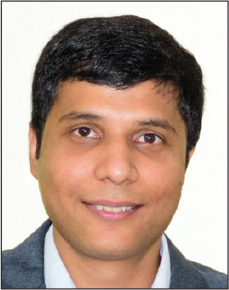 SolarPower Europe’s Global Market Outlook 2022 estimated a global ins­talled solar capacity of 940 GW, on the back of the record capacity addition of 168 GW last year. Solar energy is estimated to continue this record-breaking streak with a capacity addition upwards of 200 GW this year, to the point that we are co­unting solar energy in terawatts now. It may have taken us decades to reach he­re, but such is the growth that 1 TW is forecasted to be the annual capacity addition within this decade.

Within India, solar energy is a means to not only aid energy security and sustainability, but also help achieve the ambitious targets set out by the government. India’s aggressive climate change commitments announced on the global stage at COP26, encompassing installing 500 GW of non-fossil fuel electricity by 2030, sourcing 50 per cent of energy requirements from re­ne­wables by 2030, and achieving net zero by 2070, are expected to be biggest drivers of future market growth for solar en­er­gy. In addition, the solar ecosystem will also unlock avenues for economic growth leading to wide-scale job creation.

The supporting cost economics and projected trajectory, with falling costs on acc­ount of economies of scale, research and development (R&D), and maturity of pro­mi­nent technologies, present a strong ca­se for solar adoption. India has been a pe­culiar market, where we have relied on im­ported modules and have higher interest rates, but have been able to achieve so­me of the lowest tariffs globally. The key reasons have been large-scale projects, and increased competition and optimisation on account of balance of system (BoS).

Key developments with bearing on the cost economics of solar

Solar power tariff had dropped to an all-time low of Rs 1.99 per unit, as discovered during the 500 MW capacity auction by Gujarat Urja Vikas Nigam Ltd (GUVNL), in December 2020. The imposition of a 25 per cent basic customs duty (BCD) on solar cells and 40 per cent on modules was expected to increase tariffs significa­n­tly. However, the discovery of a tariff of Rs 2.20 per unit in March 2021 came as a re­lief to states. A host of Covid-related un­cer­tainties, a surge in commodity prices, the notification of the Approved List of Mo­dels and Manufacturers (ALMM), and the increase in GST of 12 per cent have led to a further rise in tariffs. An appropriate indicator would be the Rs. 2.49 per unit disco­vered in Sep­tember 2022, during GUVNL’s 750 MW solar auction.

To boost domestic production, India has taken several steps towards incentivisation (the production-linked incentive (PLI) scheme, manufacturing-linked tenders, etc.) as well as protection (BCD, ALMM, etc.). The effects will be visible within two to three years, when wafer production go­es live in India.

Solar modules combined with BoS constitute the power generating system of a so­lar power plant. It converts solar insolation into usable electrical power. Solar modu­les are the most significant component in a solar project and can account for 55-65 per cent of the overall project cost. The key raw material for solar wa­fers, polysilicon, has undergone stea­dy price climbs, as output has been cut for a variety of reasons. Solar cell and module prices are dr­o­pping and are expected to fall further in tandem with polysilicon and other materials that go into the making of modules.

The bill of materials (BoM) for each company is different. However, solar cells are the single biggest component in a module, accounting for 60-70 per cent of overall module costs. In India, cell manufacturing is limited, but module manufacturing is adequate. Developers, and engineering and procurement companies (EPCs), ha­ve been importing both cells and modules for use in solar projects. The two key app­roaches to sourcing modules are:

Procuring modules domestically with imp­o­rted cells: This is the more prevalent method currently. Cells are imported from China, at prevailing cell prices at the China port. The delivered price in India is calculated after factoring in shipping expenses, BCD and cess. The applicable GST on cells is creditable (assuming levy of GST on selling of modules), and is thus not calculated. A cell to module BoM comprising aluminium, solar glass, EVA, backsh­eet, etc., is added, and subsequently a pro­fit ma­rgin and GST of 12 per cent are included to estimate the landed price of modules. Cell prices vary depending on the qu­ality, the quantity ordered and the de­li­very dates. Older modules may be ch­ea­per by about 2-3 cents per Wp.

Outright importing modules: Import of modules post April 2022 attracts a BCD of 40 per cent. Considering a module price of 25 cents Wp (the current module spot price for mono passivated emitter and rear cell or passivated emitter and rear contact (PERC) modules), the delivered price in India translates to about 42 cents per Wp post factoring in shipping expenses, 40 per cent BCD and cess/taxes, and GST of 12 per cent. A GST of approximately 4-5 cents per Wp is avoided (credited) in commercial and industrial or EPC capex contracts. Bifacial solar modules are expected to be priced around 0.5-1 cents per Wp, higher than mono-PERC modules. This mode has been the traditional mode. However, with the absen­ce of Chinese manufacturers in the ALMM, there is uncertainty with regard to outright module imports.

As more cell manufacturing capacity gets deployed, these two procurement modes shall lose relevance and procurement sh­all mainly happen through domestic ma­nu­facturers of cells and modules.

Module assembly in India using imported cells shall remain the prevalent mode till new cell capacities, including capacities aw­arded under the PLI scheme. Two ye­ars from now, the prices of solar cells ma­nufactured in India shall be the driver for module price reduction.

In financial year 2022, polysilicon prices increased by 166 per cent and aluminium prices increased by approximately 37 per cent. Spot prices of polysilicon have alrea­dy fallen to about $32.5 per kg, and primary consultations reveal that the prices of polysilicon are expected to be moderate in the next two years, stabilising arou­nd $10-$15 per kg in the long term, as was the prevailing price prior to the Covid-19 shutdo­wns. Therefore, a price forecast of $15 per kg for polysilicon has been considered for financial year 2025 and $10.5 per kg for financial year 2029 in the forecast for module prices. With new polysilicon capa­cities going live in the coming years, there exists a possibility of an early decline in prices. Solar installations have gradually transitioned to mono-PERC modules from polycrystalline modules in the last two to three years. There has been an improvement in module efficiencies by 0.50-1 per cent on a year-on-year basis. The increase in module manufacturing capacities in India shall re­sult in a reduction in the profit margin (pre­mium) charged by suppliers. Further, with expansion of cell manufactu­ring plann­ed, domestic cell procurement has been considered from financial year 2026 onwards for forecasts. This shall result in savings on BCD and shipping charges for cells. GST input credit will be claimable as EPC expe­nse. Otherwise, GST at 12 per cent shall be levied on the prices forecasted here. 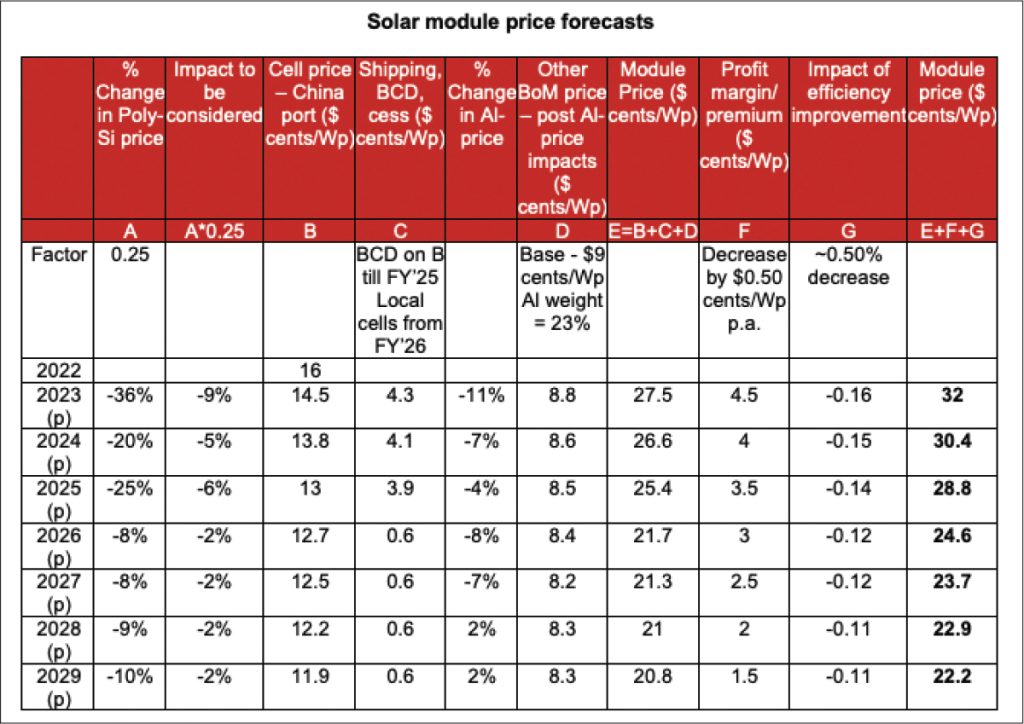 The overall cost of BoS shall be driven by the prices of the individual materials that go into the manufacturing of its various components.  With highly competitive bidding in auctions, developer margins are be­ing squeezed, leading to a focus on BoS costs to reduce capital costs. It has been observed over the years that as the prices of commodities have increased, de­­velopers have opted for optimisation me­asures in the use of components to keep BoS costs within a particular price range. Along with year-on-year technological advancements that drive down the prices of components such as inverters, there is the use of substitutes in order to optimise BoS costs.

Developers envisage that BoS prices will decline in the next two years on the back of export duties, and iron and steel supplies coming back online from China and other producers. Thereafter, on the back of the forecasted demand for commodities, BoS prices are expected to increase or decrease. In order to manage the pri­ces of iron and steel, the Government of India had impos­ed an export duty of 15 per cent on steel and 50 per cent on iron ore in the last week of May 2022, resulting in NMDC iron ore prices falling by 20-25 per cent in a span of just 10 days. Con­si­dering the long-term in­fl­ation target of the Reserve Bank of India, inflation at 4 per cent per annum has been co­nsidered. The analysis indicates that th­ough there re­mains potential for price re­du­ction th­rough BoS, it may not be significant. 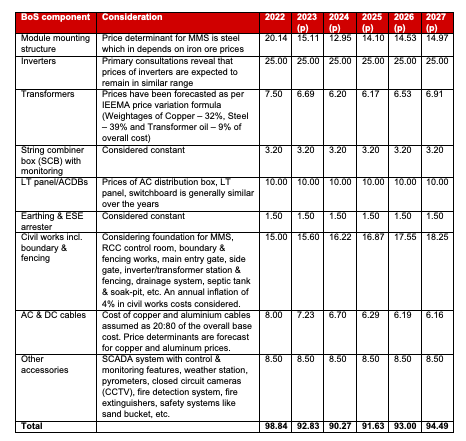 Solar energy brings environmental, social and economic benefits while displacing imported fuels, contributing to greater na­tional energy security. Solar energy has the potential to become a key contributor to manufacturing GDP, with the prospect for wide-scale employment generation.  The industry mindset is primarily driven by pri­ce economics whereby switching from conventional means to an alternative so­urce of energy will result in large financial savings. It is thus imperative that solar pri­ces continue falling sustainably, to enable a revolution not only in the energy sector but also in sectors such as cement, fertilisers and steel, where solar will be needed for green hydrogen production. With wind energy prices remaining stable, the onus of affordable round-the-clock gr­een power also rests on the shoulders of solar energy and battery storage.

To enable this, policymakers need to bring in more clarity regarding demand creation measures and associated incentives for manufacturing and deployment. Apart fr­om strengthened consensus and coordination between the centre and states, the­re is also a need to promote not only solar manufacturing, but also manufacturing of the ancillary goods, equipment and ma­chi­nery used in solar manufacturing itself.

LG Energy Solution, a South Korean battery manufacturer, has launched the LGES-5048, a 5 kW hybrid inverter. It is an addition to its RESU home battery energy storage solutions, which include the RESU6.5 (6.5 kWh), […]

Hope on the Horizon: Manufacturers’ perspective

Renewable energy manufacturers continue to face certain challenges in the industry. Although they have gained maturity over the years, wind equipment suppliers continue to struggle with capacity restrictions owing to competitive bidding and thin margins, […]