As of September 2022, India had ins­talled 41 GW of onshore wind en­ergy, significantly short of its 60 GW target to be achieved by this year. Over the past few years, it has been ob­served that the wind energy segment has received lesser policy and investor attention vis-à-vis the solar power space, which has ex­pan­ded at an impressive pace. Em­erging areas such as e-mobility, green hy­drogen and battery storage are also inc­rea­singly taking centre stage with res­pect to capital inflow, policy orientation and inves­tor interest. Nonetheless, utilising wind en­ergy effectively is integral to ac­hieving In­dia’s ambitious clean energy goals and the year 2022 has seen significant progre­ss in this regard with the commencement and completion of several auc­tions and deals. The offshore wind seg­ment is also set to take off with the much-awaited draft tender released for a 4 GW project in Tamil Nadu. Moreover, the policy side also witnessed greater activity this year, with the anno­un­cement of the rene­wable purchase obligation (RPO) trajectory for the wind and the draft wind repowering policy.

Renewable Watch presents key developments in this space in the past year – proj­e­cts and tenders, financing deals, policy in­i­ti­atives, tariffs as well as the future outlook…

According to the Global Wind Energy Co­uncil India, between 2017 and 2021, the Solar Energy Corporation of India (SECI) tendered 3.5 GW of yearly wind capacity on an average (excluding hybrid bids). More­over, 1.6 GW of the annual wind-so­lar hybrid/round-the-clock (RTC) capa­city was auctioned on an average bet­ween 2018 and 2021. However, to meet the 70 GW onshore wind target by 2030, 8-10 GW of yearly tender capacity will be needed between 2022 and 2029. Moving along this direction, the wind energy segment has seen the emergence of several key projects and auctions in the past one year. These include:

The switch from the feed-in tariff regime to the reverse auction system in India has lowered the tariffs for wind projects. How­ever, these tariffs continue to be relatively higher than those discovered in solar and wind-solar hybrid auctions. In July 2022, among the winners of GUVNL’s au­ction for 500 MW of grid-connected wind power projects (Phase III), GSECL off­ered the lowest tariff at Rs 2.84 per kWh followed by EDF Renewables at Rs 2.98 per kWh. In May 2022, NTPC renewables, Hal­vad Re­newables, JSW Neo Energy and Torr­ent Power won SECI’s auction for the 1.2 GW ISTS-connected wind power projects (Tranche XII). NTPC Renewables quoted a tariff of Rs 2.89 per kWh, while the rest quoted Rs 2.94 per kWh.

The lowest tariff of 2021 was discovered in SECI’s auction for 1,200 MW of ISTS-connected wind power projects (Tranche XI) in September 2021. ReNew Power, Green Infra Wind Energy and Anupavan Renew­ables won capacities of 300 MW, 180 MW and 150 MW, respectively at a quoted tariff of Rs 2.69 per kWh. The tariff was roughly 2.9 per cent lower than the lowest tariff discovered in SECI’s previous auction of 1,200 MW of ISTS-connected wind proje­cts (Tranche X), held in March 2021, in whi­ch Adani Renewable Energy, which won 300 MW of capacity, had quoted a tariff of Rs 2.77 per kWh. The highest bid over the past one year was quoted by Ayana, which secured 140 MW of the 200 MW bid capa­city at Rs 3.27 per kWh in GUVNL’s 500 MW auction completed in July 2022.

Unlike the solar segment and other emer­ging segments such as green hydrogen, the wind energy segment witnessed limited number of financing developments over the past year. The year primarily saw two key financing deals in the wind energy segment. In August 2022, Inox Wind’s board approved to raise up to Rs 8 billion by issuing 0.01 per cent non-convertible non-cumulative participating redeemable preference shares of a face value of Rs 10 each of the company. The funds raised through the issuance will be used inter-alia for repayment of debt.

The second key deal in the said period was Torrent Power’s acquisition of a 100 per cent stake in Wind Two Renergy Priva­te Limited (WTRPL) from Inox Green Ener­gy Services for Rs 325.1 million. The company purchased 32,510,000 equity shares of WTRPL at a face value of Rs 10 each. This acquisition is part of Torrent’s strategy to attain sustainable growth through rene­wable energy. All in all, the wind segment demands much greater investment than it has received over the past few ye­ars. Amid the government’s rising policy push with the recent wind RPO trajectory and the draft policy for offshore wind leasing, one can expect greater capital inflow, do­mestic and international, in India’s wind segment over the coming year. 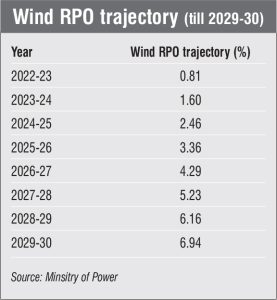 The year has seen substantial initiatives from the government to revive the wind en­ergy segment. In October 2022, the Mi­nistry of New and Renewable Energy (MNRE) released a draft for the National Repowering Policy for Wind Power Pro­jects, 2022. A “Policy for Repowering of Wind Power Projects” was issued by the ministry in August 2016 in order to create a participatory framework for repowering. A revised policy has now been drafted, taking into account feedback from various stakeholders and subsequent discussions. The objectives of this new policy in­clude optimum utilisation of wind energy resources by maximising energy yield per square km of the project area and utilising the latest state-of-the-art onshore wind turbine technologies. The policy also lays out conditions for developers to opt for repowering of their old wind turbines. A monitoring and advisory committee by the name of Wind Repowering Committee will be appointed by the ministry, in accorda­nce with the provisions of this policy, to assist the MNRE in the implementation of the Repowering Policy.

No significant progress was made in the offshore wind segment until 2021. How­ever, earlier this year, the Union Minister for Power and New and Renewable Ener­gy announced at a meeting on transmission planning for offshore wind energy projects in India that bids for offshore wi­nd energy blocks of 4 GW would be iss­ued every year for the next three years. The reports suggested that bids for development off the coasts of Tamil Nadu and Gujarat for power sale through open acc­ess/captive/bilateral third-party sale/ mer­chant sale over a period of three years will begin with the current financial year (2022–23). Following that, 5 GW of capacity will be bid out every year for the next five years, up to and including financial year 2029-30. Consequently, in November 2022, the MNRE issued a draft tender to select wind power developers for leasing seab­ed areas to develop 4 GW of offshore wind power projects off the coast of Tamil Nadu. The scope of the tender in­clu­des grid connectivity, long-term open access and access to the grid under the general network access framework.

In July 2022, the Power Ministry relea­sed the RPO and energy storage obligation trajectory till 2029-30. According to this order, the total prescribed RPO will progressively increase from 24.61 per cent in 2022-23 to 43.33 per cent by 2029-30. This includes wind RPO, which will inc­rease from 0.81 per cent to 6.94 per cent during the period under consideration. The success of the scheme will de­pe­nd on how effectively the wind RPO is implemented by states.

In March 2022, the MNRE granted an ad­di­tional three-month time extension in the scheduled commissioning date of wind power projects, accounting for delays due to supply chain disruptions caused post Covid as well as monsoon-related disruptions. Moreover, to promote clean and renewable energy, the Union Minister of Power and New and Renew­able Ener­gy recently launched the Green Energy Open Access portal, which allows any consumer with a connected load of 100 kW or above to be eligible for renewable energy through open access from any renewable energy generating plant set up by self or by any developer. The government has also indicated a possible reversal in the procurement policy from e-rev­er­se auctions to feed-in tariffs or closed bidding. Closed bidding is pla­nned in four to five wind states, with an annual bid size of 8 GW. The discovered tariff will be bundled and sold to distribution companies. How­ever, there is no formal order or notification issued from the ministry on these lines.

At present, the wind segment faces many challenges in terms of cost escalation, de­lays in completing power purchase and power sale agreements and competition from cheaper alternatives such as solar power. Moreover, issues pertaining to land acquisition and allocation, long project timelines and other supply chain bottlenecks are also prominent. However, with recent developments in terms of the repowering policy, wind RPOs and draft offshore leasing tender, it seems the segment is finally receiving the policy attention that it warrants.

Distributed wind energy systems refer to distributed or decentralised wind turbines that are installed to meet the energy demand for a specific consu­mer, or to meet local loads. These installations may be off-grid or connected […]