As the share of renewable energy projects connected to the grid is increasing, it is essential to have forecasting, scheduling and deviation settlement mechanism (DSM) regulations in place for renewables such as wind and solar. Over the past few years, the Central Electricity Regulatory Commission (CERC) and several state electricity regulatory commissions have issued forecasting guidelines for the industry. These regulations help in regulating the quantum of electricity being injected into the grid and provide a mechanism to penalise plants for deviation from the scheduled generation beyond a permissible limit.

Power producers have to forecast their generation and submit a schedule to their respective load despatch centres. The schedule can be revised when needed. Forecasting and scheduling wind energy is important to ensure grid stability, especially in states that have a high share of wind power and experience intense monsoon winds or other extreme weather conditions. Over- or under-generation can lead to the imposition of penalties or curtailment by grid operators. As per a report by CEEW, such risks are particularly concerning in states like Tamil Nadu and Rajasthan, which have experienced wind energy curtailment of up to 50 per cent and 45 per cent respectively. The norms established by the CERC have thus established charges for deviating from scheduled generation. 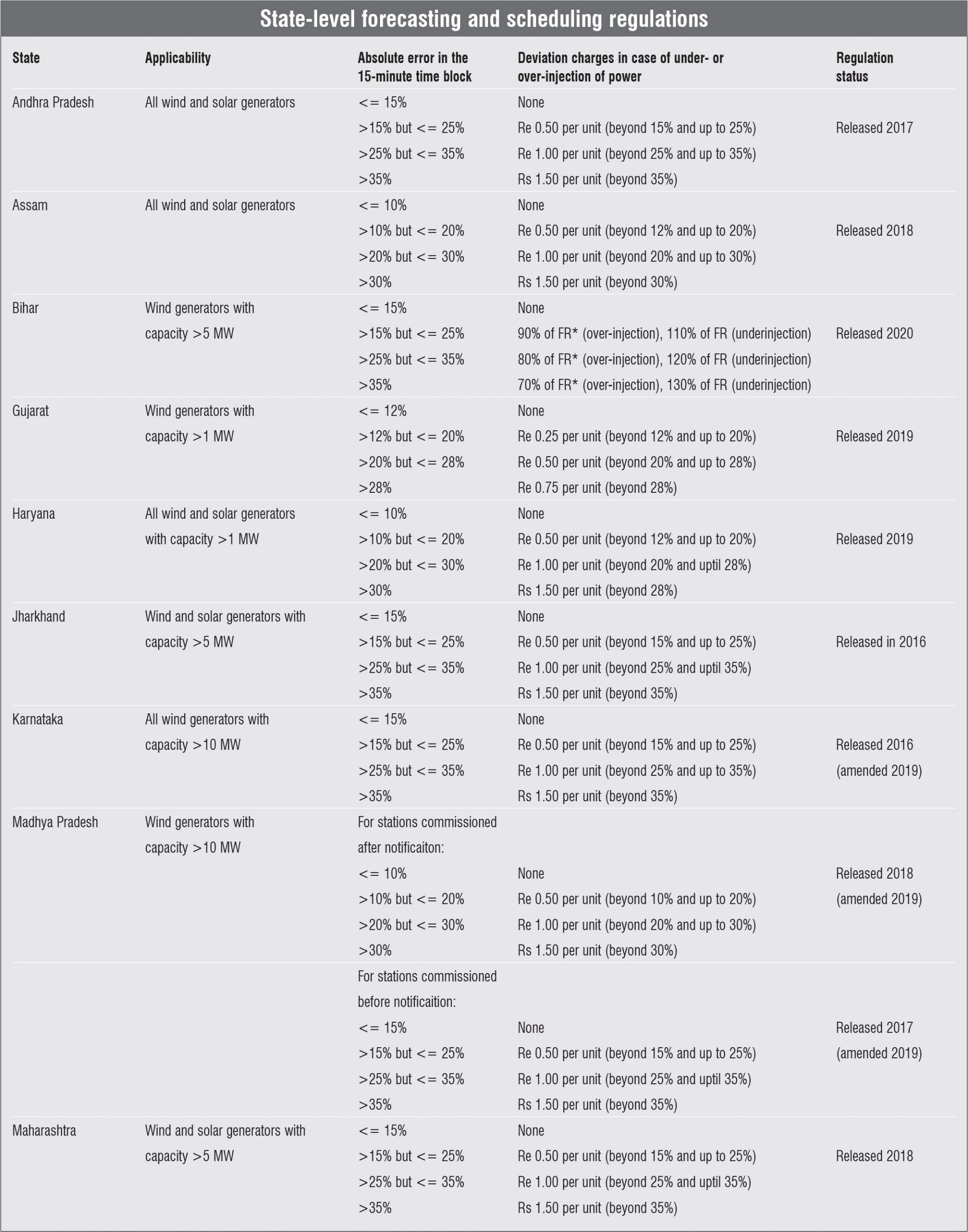 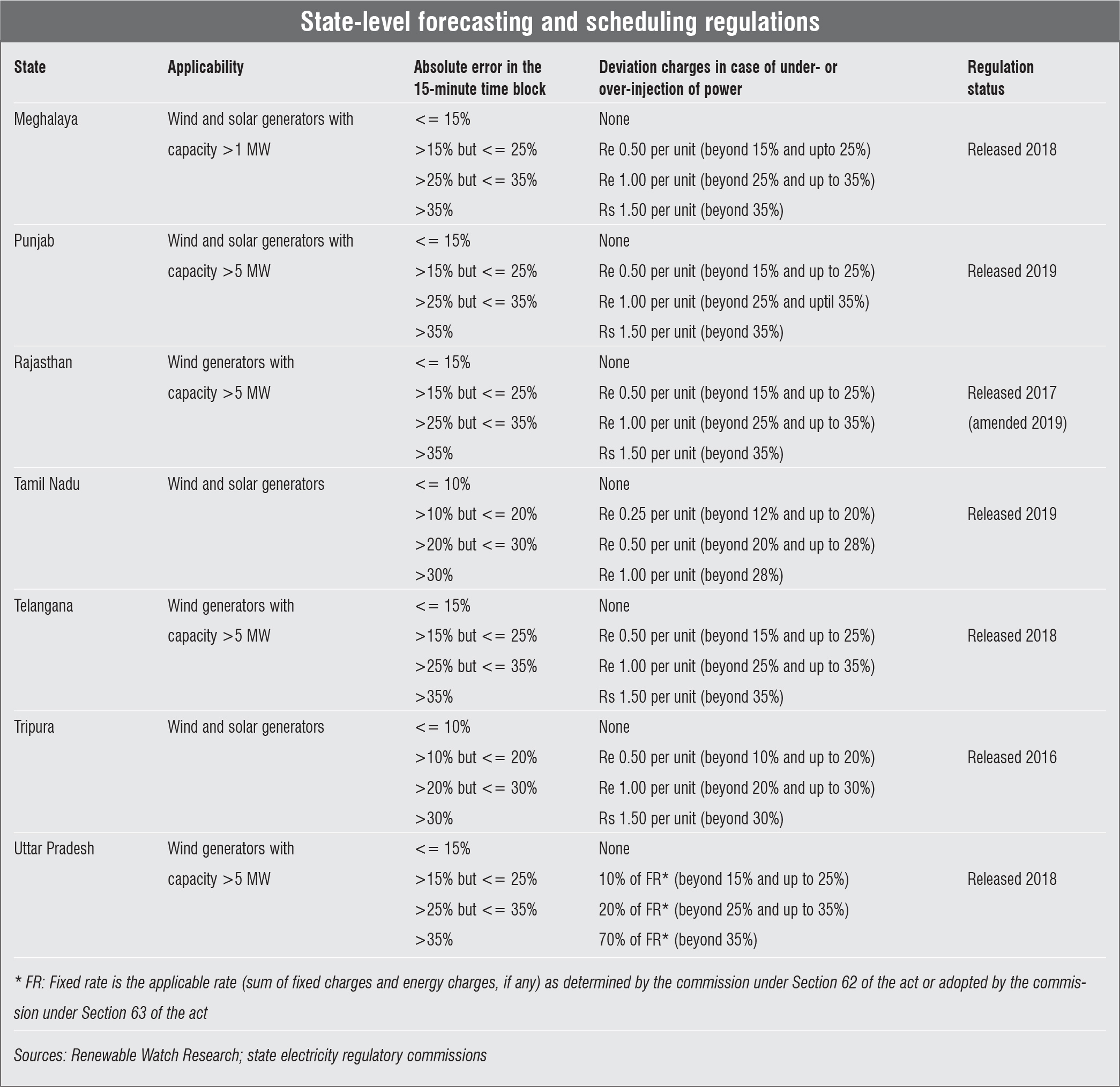 Generation forecasting is based on tools and methods used to accurately determine the amount of power that will be produced in a scheduled time block. Power forecasts are derived by combining plant availability with weather forecasts for the location. Wind power forecasting is typically carried out through a physical approach that uses models based on numerical weather prediction forecasts, a statistical approach that employs statistical models, or a hybrid approach. Inputs such as historical data and weather forecasts, and new technologies such as machine learning are used to predict demand and generation for the next day. These details have to be sent to the scheduling entity, which could be the state or the regional load despatch centre. These entities can then use the forecasted information to minimise deviations between scheduled and actual despatch.

Effective renewable energy management is possible only when grid operators have visibility into the amount of renewable energy expected to be injected into the grid on a day-to-day basis. Thus, forecasting and scheduling of renewable energy is critical to anticipate balancing requirements and procure adequate reserves for maintaining grid reliability. The forecasted schedules are revised several times during the day to capture generation variability on a real-time basis. This helps improve accuracy and minimise the commercial impact on generators.

A single-part tariff structure and the must-run status of renewable energy gave little incentive to industry players for investing in generation forecasting and scheduling. This led to difficulties in maintaining grid stability for power operators and load despatch centres. To address this, the CERC and the Forum of Regulators (FoR) took defining steps by drafting regulations for deviation settlement. These guidelines have helped increase awareness among the states regarding grid balancing challenges due to renewables integration.

The CERC Deviation Settlement Mechanism Regulations, 2014, define a market mechanism for holding generation companies accountable for their power supply commitments. The regulations were implemented to maintain grid discipline and security, as per the Grid Code. Since the regulations were released, the CERC has introduced four amendments and a fifth draft amendment.

In October 2015, the FoR published model regulations regarding the DSM to be adopted by states for renewable energy plants. The regulations recommend that all renewable energy generators forecast and submit their generation schedule on a day-ahead basis, either independently or through a qualified coordinating agency (QCA), which will form the basis for commercial settlement. Any commercial impact on account of deviation from the schedule based on the forecast will be borne by the wind and solar generator, either directly or transacted via the representing QCA. Based on these regulations, many states have come out with their own regulations in the past few years.

States that already have significant wind installations, such as Tamil Nadu, Gujarat, Karnataka, Andhra Pradesh, Maharashtra, Rajasthan and Madhya Pradesh, have released DSM regulations. Other states with increasing renewable energy projects, such as Assam, Bihar, Haryana, Jharkhand, Meghalaya, Punjab, Tripura and Uttar Pradesh have also rolled out their regulations. A few other states have also prepared draft regulations for deviation settlement and related matters for solar and wind. These largely follow the CERC guidelines with some minor changes.

Errors in forecasting and scheduling can occur due to changing weather conditions as well as ambiguity in the DSM regulations across states. The permissible error bands for deviation also differ from state to state, although most states have a permissible error of ± 15 per cent, within which penalties for deviating do not apply. In a few states such as Haryana, Madhya Pradesh and Tamil Nadu, the range for error is only ± 10 per cent, which is difficult to achieve even with the latest technologies. However, Madhya Pradesh also has a separate range of ± 15 per cent for stations that were commissioned before the notification of regulations.

The central-level model assumes that the settlement of payments happens on the basis of the power scheduled instead of the power actually generated. The DSM is also based on the cost of power purchase in the power purchase agreements (PPAs). For central-level projects that are connected to the ISTS network, the implementation of forecasting, scheduling and DSM mechanisms has been quite smooth as they follow the CERC regulations. However, the projects that are connected to the state network have faced some problems.

Most PPAs for wind projects at the state level are based on the metered generation of power. Instead of changing the framework of PPAs on the basis of scheduled generation for all projects, the forecasting and scheduling mechanism for state-level projects was based on metered generation. Hence, the DSM penalties are a fixed quantum and not related to PPAs. This may be an issue since many state regulations are based on the central regulations released before 2016, when there was far less competition in solar and wind tariffs. Tariffs have been falling consistently over the past few years, especially after shifting to bidding for wind power. Since the deviation charges stay the same, they are forming an increasingly large share of project costs. Although the forecasting, scheduling and DSM regulations aim to maintain grid stability, they also tend to penalise renewable energy developers on things beyond their control.

On the regulatory front, there is a strong need for uniformity across states in terms of penalty slabs under forecasting, scheduling and DSM regulations. For new projects, forecasting may be difficult due to the lack of historic weather and generation data. In view of this, a six-month trial could be undertaken to focus on providing schedules on a day-ahead basis. Allowing the aggregation of forecasts and deviation settlement at boundary can lead to higher accuracy for day-ahead forecasts and help with planning at the discom end. Currently, this is allowed only in Karnataka and Andhra Pradesh.

Going forward, there is also a need to reduce the cost burden of DSM charges to ease the pressure on renewable power generators. With falling costs of energy storage, grid-scale battery energy storage systems could be deployed in wind-rich states to prevent curtailment during congestion and lower DSM charges. Further, new business models could evolve, incorporating the use of mechanical, hydro and electrochemical storage technologies.

Longroad Energy Holdings, a US-based developer and holding company for renewable energy, has announced a $500 million equity investment from MEAG, an asset management subsidiary for Munich Re entities, in order to expand its 1.5 […]

Rajasthan Renewable Energy Corporation has issued a request for proposals for the design, supply, erection, testing, and commissioning of 50 MW of grid-connected rooftop solar projects across Rajasthan’s state government buildings. Within 24 months of […]

By Ashay Abbhi India’s power sector is experiencing a paradigm shift, driven primarily by a strong demand growth, and the government’s target to achieve 40 per cent non-fossil fuel-based generation capacity as per its intended […]