Energy storage has emerged as a key element of grid stabilisaton and electric vehicle (EV) uptake. In the renewable energy sector, it addresses the intermittency issue of solar and wind power, and ensures a smooth power generation output, thereby facilitating grid integration. It has a range of other applications across generation, transmission and distribution, helping improve power supply. As the importance of energy storage is being recognised, increasing emphasis is being laid on advancements in cell technology.

To this end, the union cabinet recently approved the National Programme on Advanced Chemistry Cell Battery Storage under the production-linked incentive scheme. Such cells represent the new generation of advanced storage technologies. They can store electric energy as either electrochemical or chemical energy, and convert it back into electric energy as and when required. Among other goals, the programme aims to give an impetus to research and development in order to achieve higher specific energy density and cycles in ACC, as well as promote newer and niche cell technologies.

Lead-acid batteries have long been the traditional choice worldwide as they are relatively cheap. However, interest in them is waning in favour of more advanced technologies. The most popular battery technology at present is the lithium-ion (Li-ion) battery. The cathode of a Li-ion battery is made up of metal ions including cobalt, nickel and aluminium. With high round-trip efficiencies, these batteries continue to remain popular due to an established market across numerous segments, especially small-scale applications. However, battery chemistries beyond Li-ion are emerging as promising candidates for high energy density, low-cost and large-scale energy storage applications.

Concerns about the availability and cost of lithium have prompted interest in alternative battery technologies that use more abundant elements with the potential for higher energy density and enhanced safety. Given their long lifetimes, the application of flow batteries and sodium-based batteries is increasing. The vanadium redox battery, known as the vanadium-flow battery, is also becoming a popular choice. Vanadium-flow batteries are fully containerised, non-flammable, compact, reusable over semi-infinite cycles, discharge 100 per cent of the stored energy, and do not degrade for about 20 years. Further, vanadium is more abundant in the earth’s crust when compared to lithium. Vanadium-flow batteries can also be quite large, and are thus useful for industrial and utility-scale applications. At a larger scale, these batteries may also be relatively cheap. However, the applications of vanadium-flow remain limited for EVs and smaller-scale use cases.

The battery storage market is expected to continue to be dominated by Li-ion and vanadium-flow batteries for the coming few years. According to Watt Joule, Li-ion and vanadium-flow batteries will have market shares of 60 per cent and 30 per cent respectively by 2025. However, beyond these existing technologies, newer batteries are emerging with improved performance. For instance, recent research effort has yielded a new fast charging battery technology that uses a glass electrode instead of a liquid one, sodium instead of lithium, and may have three times as much energy density as Li-ion batteries.

Various countries are increasingly opting for the incorporation of energy storage in the renewable energy space to slowly phase out thermal power. According to a recent analysis of global battery storage projects by Bloomberg NEF, Li-ion batteries are now cheaper than fossil fuel-based peaking plants across a large part of the world. Li-ion battery pack prices, which were above $1,100 per kWh in 2010, have fallen 89 per cent in real terms to $137 per kWh in 2020. By 2023, average prices are projected to be close to $100 per kWh. Further, the batteries can help save customers’ money by shifting low-cost solar power produced during the day to meet high-priced peak demand in the evening. Despite these obvious advantages of batteries, the cost challenge still remains for longer-duration energy storage. As the discharge duration increases, so does the cost of batteries. Thus, for power supply of over four hours, batteries still have some ground to cover. 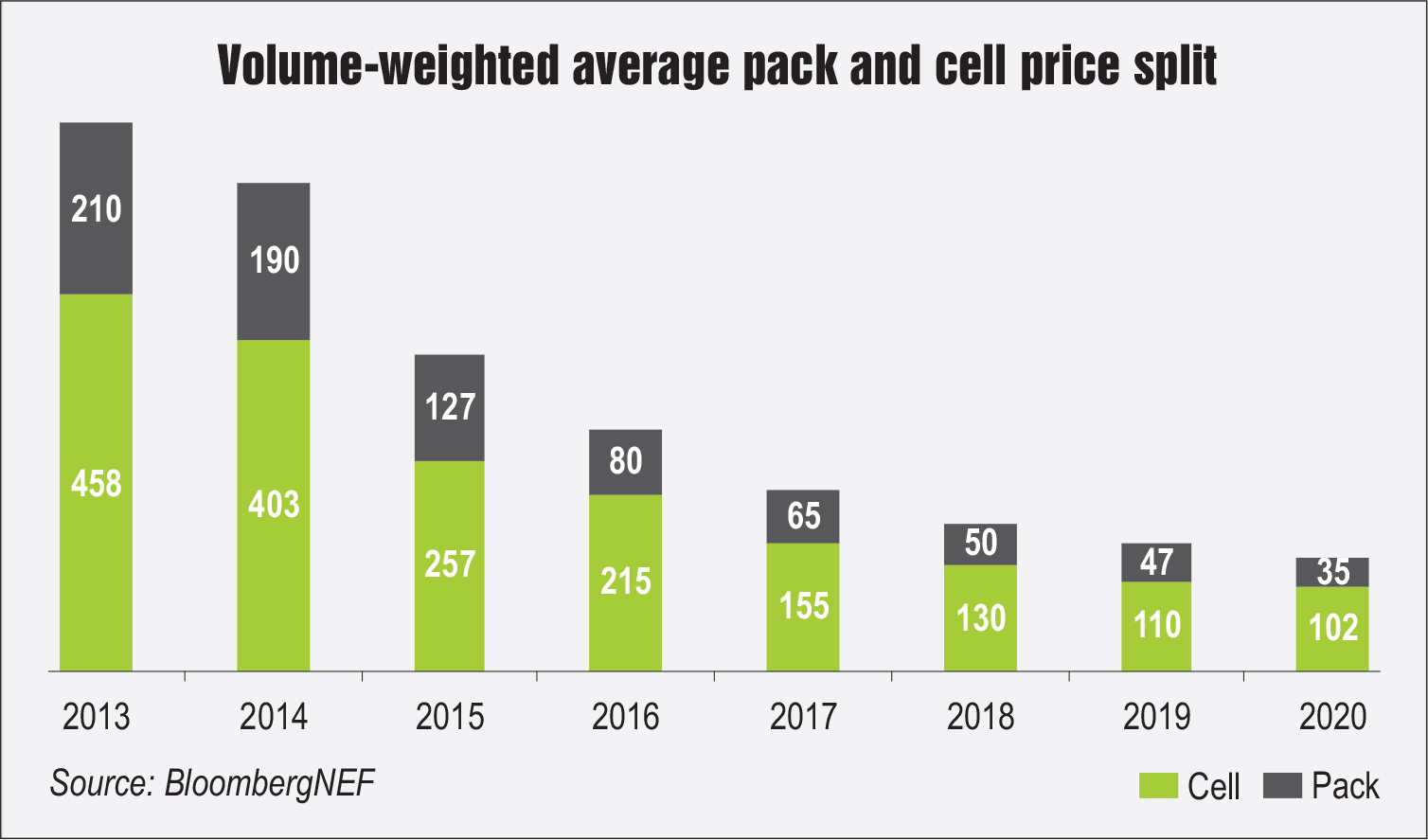 While new storage technologies are being explored, hydropower pumped storage plants (PSPs) continue to the largest energy storage technology available for utilities, besides being the oldest. PSPs offer the unique advantage of acting as a load in the pump mode by raising water to the upper reservoir during times of surplus power and running in generating mode during power-deficit situations of the grid. They provide other advantages such as large grid storage and long discharge time, high ramp rate, voltage support, grid stability and black-start facility. They balance the grid for demand-driven or generation-driven variations, improve the overall economy of power system operation, and increase the capacity utilisation of thermal, solar and wind stations. Thus, in certain contexts, pumped hydro storage continues to make sense, especially when paired with other intermittent renewable energy sources such as solar or wind.

For long-term and large-scale energy storage, hydrogen in the form of compressed gas, ammonia or synthetic methane can also help balance variations in electricity supply and demand from renewable energy sources. A new market for hydrogen is being explored, particularly for hydrogen generated from renewable sources of energy, also known as green hydrogen. Hydrogen can be stored physically as a gas or liquid. The appropriate storage medium depends on the volume to be stored, duration of storage, speed of discharge and geographic availability of other options. For most applications, hydrogen storage requires high pressure and low temperature conditions.

Energy storage in the form of hydrogen has the potential to decouple generation from demand, thus facilitating the integration of high shares of intermittent renewable energy and avoiding curtailment of the generation surplus. If managed well, the addition of hydrogen into the ecosystem can provide significant flexibility to the system. While shorter-term variations can be better managed with batteries, hydrogen can help with long-term and larger-scale energy storage requirements, as various sectors move towards more electrification in a bid to decarbonise.

The use of batteries has seen an upswing in recent years. This has resulted in cheaper production costs and larger energy storage capacities. As per global industry estimates, the installed costs of battery storage could further decrease by 50-66 per cent by 2030, which, in turn, can drive the uptake of battery storage. According to a projection by the India Electronics and Semiconductor Association, the market for energy storage in India is likely to grow at a CAGR of 6.1 per cent up to 2026. Meanwhile, the global electrical energy storage is estimated to multiply six times between 2016 and 2030.

To deal with the seasonality of power demand and supply, the existing flexible resources should be utilised in the best possible way. However, in the medium to long run, there will be an increasing need to incorporate additional options in order to accommodate seasonal electricity load swings due to increased renewable penetration. In this scenario, a combination of advanced battery storage systems and hydrogen-based storage solutions would become an economically viable and suitable option.

NTPC Limited has invited bids for the engineering, procurement, and construction (EPC) of a grid-connected battery energy storage system (BESS) with 10 MW and 40 MWh rated AC discharge capacity at a 33KV switchgear interconnection […]