The island is currently in the initial phase of construction, which involves the installation of approximately 200 wind turbines with a combined capacity of 3 GW. The island, which is expected to be operational at full capacity by around 2033, will act as a major renewable energy hub and supply energy to 10 million homes. In addition, once fully developed, the energy island will provide enough green fuel to supply all ship and aircraft refuelling in Denmark.

The power transmission system from the energy hub to Denmark will be built and owned by the national transmission system operator (TSO) Energinet. The project is being considered as a potential blueprint for other coastal nations to develop their own green energy sources as it can easily be replicated in any other country.

The Nordic country, with its favourable wind speeds, was a pioneer in both onshore and offshore wind, building the world’s first offshore wind farm almost 30 years ago. With another massive project like this, Denmark is making steady headway in utilising the abundant offshore wind energy potential in the country. It is strengthening its position in the European energy market through large-scale offshore wind power generation and power trade with its neighbouring countries.

Denmark plans to add up to 7.2 GW of offshore wind capacity between 2027 and 2030. The plan is part of a Covid-19 recovery stimulus originally outlined in May 2020, but the agreed capacity exceeds the targets laid out. With such ambitious targets, the Nordic country decided to halt its search for oil and gas in the North Sea in December 2020. Such efforts are in line with the new climate-first commitments from countries around the world.

The energy island will be based on a platform and will serve as a hub for electricity generation from surrounding offshore wind farms. It will gather green electricity from hundreds of wind turbines surrounding the island and distribute it directly to consumers in countries surrounding the North Sea. The long-term ambition is to be able to store green electricity on the island, convert it to liquid green fuel and send it via subsea cables to Denmark and its neighbouring countries.  The final location of the energy island and the associated areas for offshore wind farms will be decided soon.

The project will be developed through a public-private partnership between the Danish state and private companies. While the state will own the majority of the island, private companies will play a crucial role in innovation, flexibility, cost effectiveness and development of business potential. Details about the ownership of the island still need to be specified. 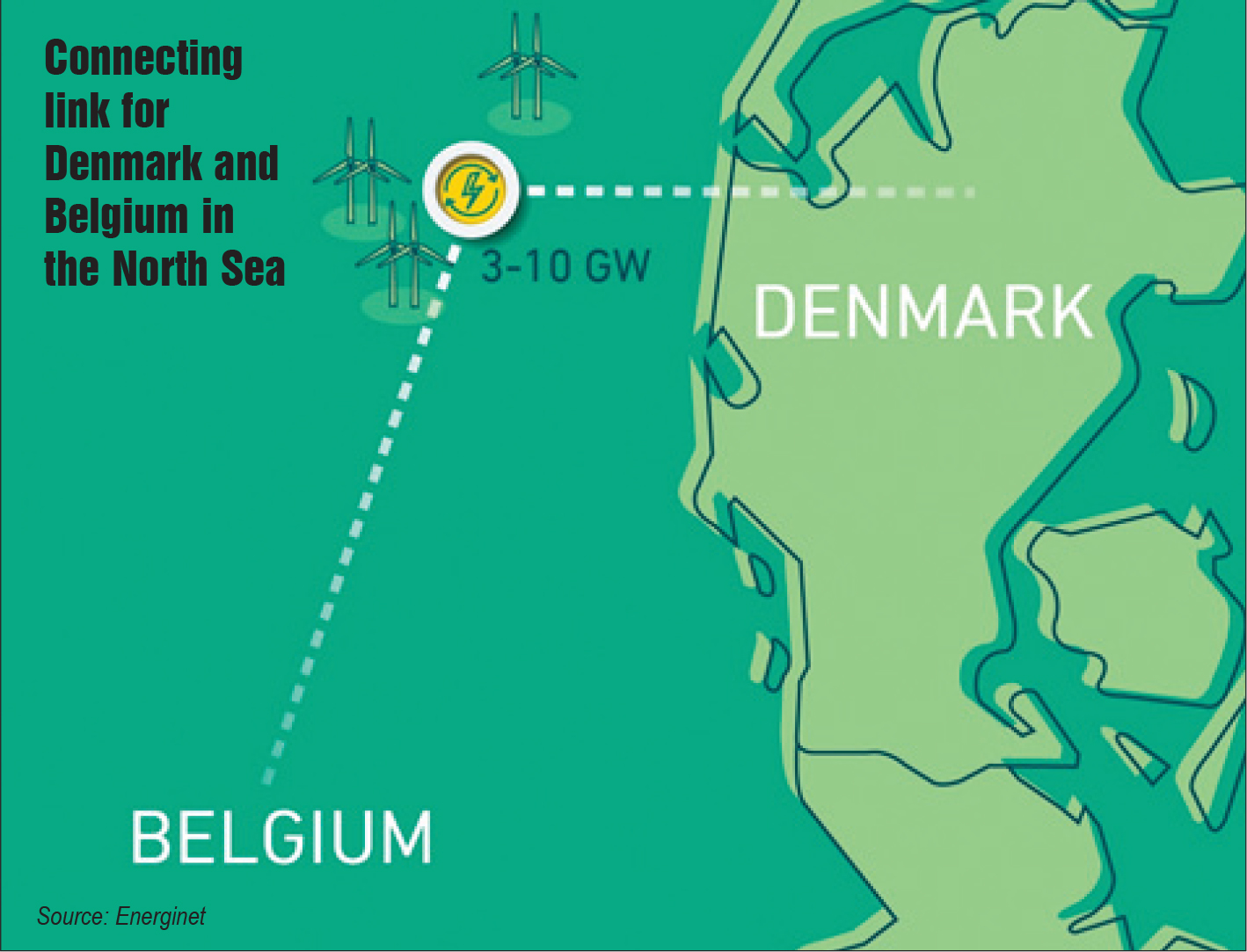 In 2020, Denmark, the largest oil producer in the EU (Norway and the UK are not in the bloc), committed to ceasing all oil and gas extraction activities in the North Sea by 2050, the same year the EU has targeted for bloc-wide climate neutrality (net zero carbon dioxide emissions). According to Denmark’s Ministry of Climate and Energy, offshore wind energy in the North Sea has immense potential, and by 2040, countries in the region expect the total capacity of regional wind farms to reach 150 GW, which will be sufficient to meet the electricity demand of 150 million households.

Against this background, in February 2021, the Danish government approved the plan to build an artificial island in the North Sea as part of the efforts to switch to green energy. The idea is to connect and distribute power between Denmark and its neighbouring countries. In February 2021, Belgium’s TSO Elia and Energinet signed an agreement to assess, by the end of 2021, whether it would be possible and beneficial to connect Belgium and Denmark with an electricity interconnection via the future energy island in the North Sea. Following the signing of the agreement between, the energy island in the North Sea is now central to assessing three possible electricity interconnections to Germany, the Netherlands and Belgium. Energinet is already cooperating with German and Dutch companies to explore similar international connections. If the electricity interconnection between Denmark and Belgium becomes a reality, it will pass through the offshore waters of four different countries and will probably be the world’s longest high voltage direct current cable.

Earlier, in June 2020, the Danish Parliament decided to initiate the construction of two energy islands, which will export power to mainland Denmark and its neighbouring countries. One of these islands is the aforementioned project in the North Sea. The second island, called Bornholm, will be located in the Baltic Sea. The move came after the EU announced its plans to develop an electricity system fully based on renewables within a decade. It is also an important part of Denmark’s legally binding target to cut greenhouse gas emissions by 70 per cent by 2030 over the 1990 levels, one of the world’s most ambitious targets in this space.

In January 2021, Germany’s TSO 50 Hertz and Energinet signed a letter of intent to collaborate on the Bornholm Energy Island project in the Baltic Sea. The Bornholm Energy Island will connect Germany and Denmark to an offshore hub with around 2,000 MW of wind power capacity. The German and Danish grids will be connected through an interconnector during the first phase of the development. The electricity from the offshore wind farms surrounding Bornholm will be fed into this interconnector on the island. In the following phases, connections to other littoral states and offshore wind farms of the Baltic Sea will be developed gradually. The two TSOs plan to carry out feasibility studies before the end of 2021. In the future, other partners from the Baltic area are expected to join this initially bilateral cooperation. An advantage of the Bornholm project as compared to other planned offshore hubs in the North Sea is that a natural island is already available. This makes it possible to efficiently and flexibly construct the installations.

According to the Danish Energy Agency, as part of the Climate Agreement for Energy and Industry, Denmark aims to become the first country in the world to begin working on such energy islands, which are expected to be completed by 2030.

Scale of the project

The scale of the project, which will be located in waters almost 80 km off the coast of Jutland, the large peninsula that comprises the Danish mainland, is massive. It will act as the transmission centre for hundreds of wind turbines surrounding it. The initial phase of the artificial island will cover an area around the size of 18 soccer pitches. Initially, approximately 200 offshore wind turbines will send electricity to the hub. The hub will be capable of producing 3 GW of electricity. It will be scaled up to 10 GW, which is nearly one and a half times Denmark’s current demand and will be enough to power 10 million homes in Europe. Depending on its final capacity, the island will cover an area of 120,000-460,000 square metres.

The estimated cost of building the artificial island with 10 GW of capacity and the required transmission grid is $33.97 billion. It is expected to be the largest construction project in Danish history. Apart from supplying power to other European countries, the project aims to produce green hydrogen from seawater, which can be exported. Large batteries on the island will store surplus electricity for use when demand is high.

Denmark’s landmark agreement for the construction of an energy hub in the North Sea is a significant step towards green transition. This marks the start of a new era of sustainable energy production in Denmark and the world.