In order to promote the uptake of solar power, the state had released the Karnataka State Solar Policy, 2014-21, which has been amended thrice so far. Under the policy, 6,000 MW of solar power capacity was envisaged to be developed by 2021, a target which the state surpassed in December 2020 itself, by installing a solar capacity of 7,366 MW. Solar power makes up close to 48 per cent of the state’s total renewable energy portfolio as of February 2021. With the solar policy set to expire this year, the state government recently released the draft of the Karnataka Renewable Energy Policy, 2021-2026. This proposed policy aims to develop 20 GW of renewable energy projects with and without energy storage. Of these projects, 2 GW will be rooftop solar.

With additional renewable energy penetration in the power grid, there will be a need for higher capacity factors, firmness and flexibility in power supply to effectively replace conventional power sources. To this end, the draft Karnataka Renewable Energy Policy, 2021-2026 aims to promote renewable energy projects such as solar-wind hybrid with energy storage or any other renewable energy with storage system. The policy targets making Karnataka an attractive destination for investors in the renewable energy sector. All solar, wind, solar-wind hybrid, energy storage, mini- and small-hydro, biomass, waste-to-energy projects and new initiatives or pilot projects established in the state of Karnataka during the policy period shall be eligible for benefits under the proposed policy. 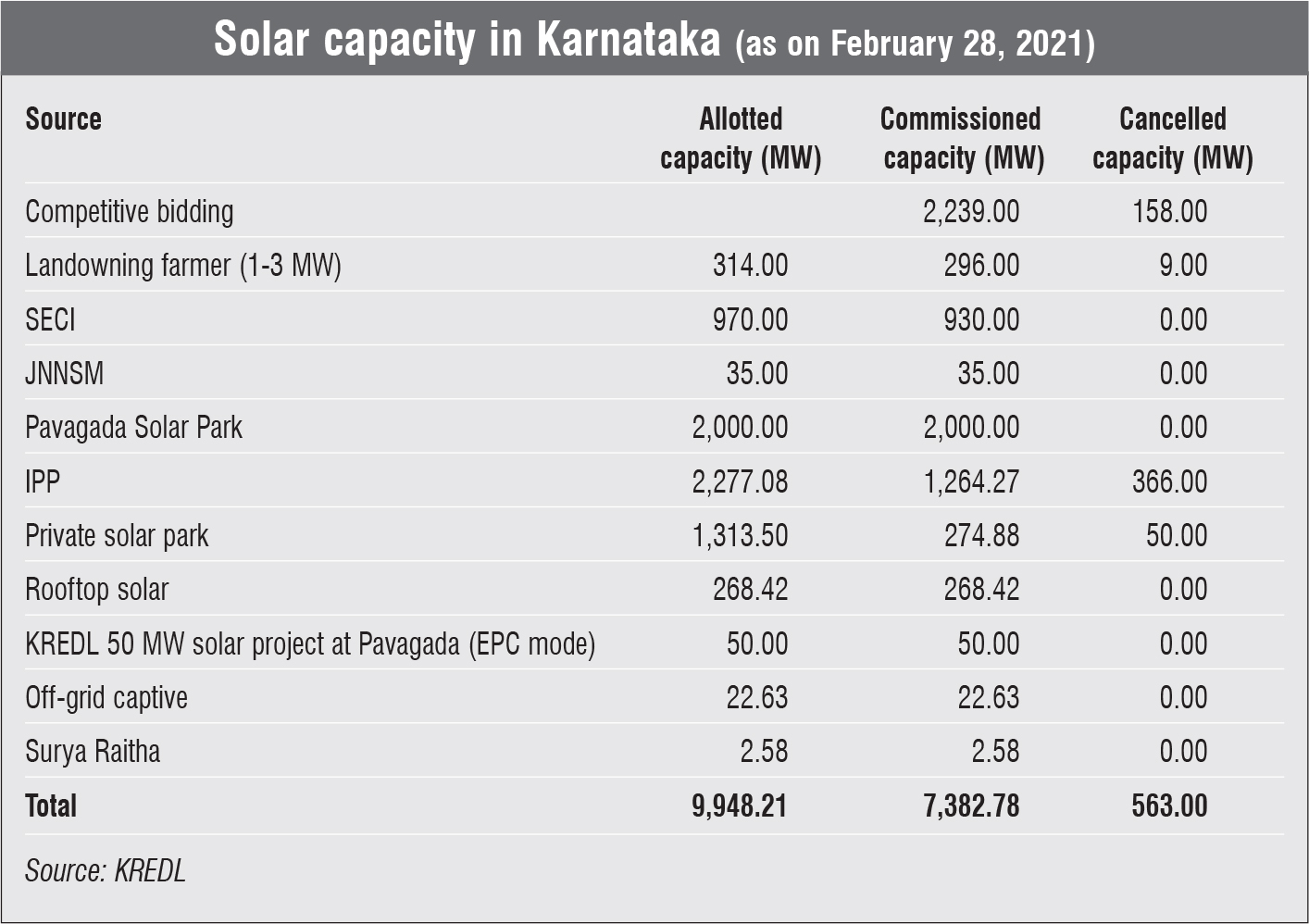 Within the solar space, the state has been focusing on its rooftop segment, besides its solar parks. Karnataka has emerged as the best state in India for rooftop solar projects. A report titled “State Rooftop Solar Attractiveness Index” (SARAL) was released in August 2019. It put Karnataka, Telangana, Gujarat and Andhra Pradesh at the first, second, third and fourth positions respectively. Karnataka, with a score of 78.8, was assigned A++ rating.

In order to promote the uptake of rooftop solar systems, Karnataka has launched a comprehensive e-portal that acts as a single-window clearance system for all applications. It is currently promoting solar rooftop projects on public buildings as well as domestic, commercial and industrial establishments through net and gross metering methods based on tariff orders issued by the Karnataka Electricity Regulatory Commission (KERC).

The draft Karnataka Renewable Energy Policy targets an ambitious 2 GW by 2026. However, this is a long trajectory considering the current capacity of 255.1 MW as per the Ministry of New and Renewable Energy (MNRE). Further, in February 2021,  the KERC proposed allowing net metering for rooftop solar projects between 1 kW and 10 kW, and gross metering for capacity over 10 kW. This may become an issue since putting a ceiling on net metering has been one of the main obstacles in the way of rooftop solar capacity growth in India.

Karnataka Renewable Energy Development Limited (KREDL) and the Solar Energy Corporation of India (SECI) formed a joint venture company, Karnataka Solar Power Development Corporation Limited (KSPDCL), in March 2015 to set up solar power projects in Karnataka. The state houses one of the world’s largest solar parks – the Pavagada Solar Park. This solar park has a total operational capacity of 2,050 MW. The project is spread over 53 sq. km, spanning five villages – Balasamudra, Tirumani, Kyataganacharlu, Vallur and Rayacharlu. The last 200 MW capacity, developed by SB Energy, was installed in December 2019. Of the total capacity, NTPC implemented 600 MW, SECI 200 MW and KREDL 1,250 MW. Recently, another solar park has been proposed in the state. While presenting the state budget for 2021-22, in March 2021, the Karnataka state government proposed setting up a 500 MW solar park at Firozabad in Kalaburagi district. KREDL would develop the 500 MW solar power park on 1,551 acres of land owned by Power Company of Karnataka Limited at a cost of about Rs 5 billion. The power generated by this project would be developed by independent power producers (IPP) and supplied through the interstate transmission system (ISTS) network.

In November 2020, the MNRE issued a concept note for the development of wind parks or wind-solar hybrid parks. The concept note explored the potential of wind and hybrid parks in states with high solar and wind energy potential, including Karnataka. The hybrid wind-solar renewable power parks will not only increase the cumulative capacity utilisation factor, but also help optimally utilise land and the transmission network. The MNRE, along with the National Institute of Wind Energy (NIWE), has identified sites for wind park development at Chitradurga, Davangere and Ballary in Karnataka. These are estimated to have a cumulative development potential of about 11,065 MW. All of these sites are estimated to have individual capacity utilisation factors of over 34 per cent and average wind speeds crossing 7 metres per second. The draft renewable energy policy of the state is expected to further help develop renewable energy parks including Ultra mega renewable energy power parks (UMREPP) by focusing on setting up solar parks, wind parks or hybrid renewable energy parks within Karnataka.

Even though Karnataka has promising potential for developing wind-solar hybrids, there have only been limited projects installed so far. In April 2018, India’s first wind-solar hybrid project (with 50 MW of wind and 28.8 MW of solar) was developed on a pilot scale by Hero Future Energies. In July 2020, CleanMax installed a 15 MW solar-wind hybrid project for Food Corporation Cargill. However, the state is moving towards scaling up such projects. In its recent state budget announcement, Rs 42.4 billion was allocated for two wind-solar hybrid projects, which are expected to create 8,480 jobs. 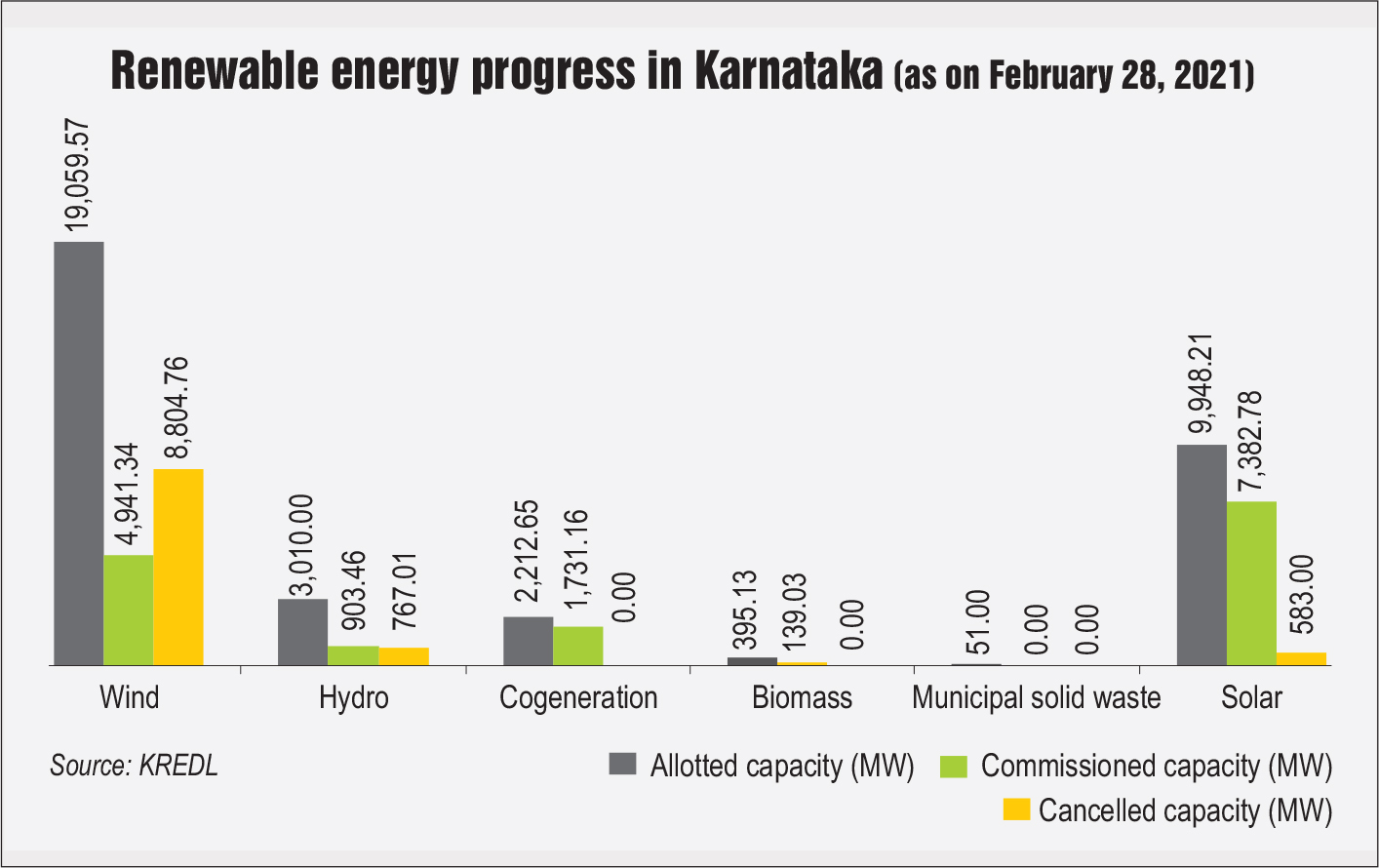 Going forward, Karnataka will focus on the development of an energy storage market including pumped hydro for integrating more renewable energy into the grid. Energy storage systems can offer grid support services such as peak reduction, curtailment management, and managing intra-day variation and seasonal variation  to meet the increasing power demand of the state.

It has been working on pumped hydro storage for the past few years. In June 2017, Karnataka Power Corporation Limited announced the 2 GW Sharavathy Pumped Storage Project (8 x 250 MW) in the Shivamogga and Uttara Kannada districts near the existing Talakalale and Gerusoppa reservoirs. Greenko is also in the process of developing a multi-GW-scale integrated renewable energy storage project with grid connectivity in Saundatti. This project includes solar, wind and pumped hydro storage components. During the state budget announcement in December 2020, the government declared the setting up of a 1,000 MW “pumped hydro storage plant” at a cost of Rs 40 billion.

More recently, there has been a push towards incorporating more battery storage capacity. In March 2021, KREDL issued an expression of interest to develop a pilot battery energy storage system (BESS) of 7 MW/21 MWh in the Pavagada Solar Park or any other location capable of discharging about 21 MWh of energy, in three hours’ duration during peak hours. The discharged energy from the BESS would be supplied to C&I consumers during peak demand period. The proposed BESS is expected to be commissioned before March 2022. KREDL plans to purchase the power for charging the BESS during off-peak and normal hours through open access. 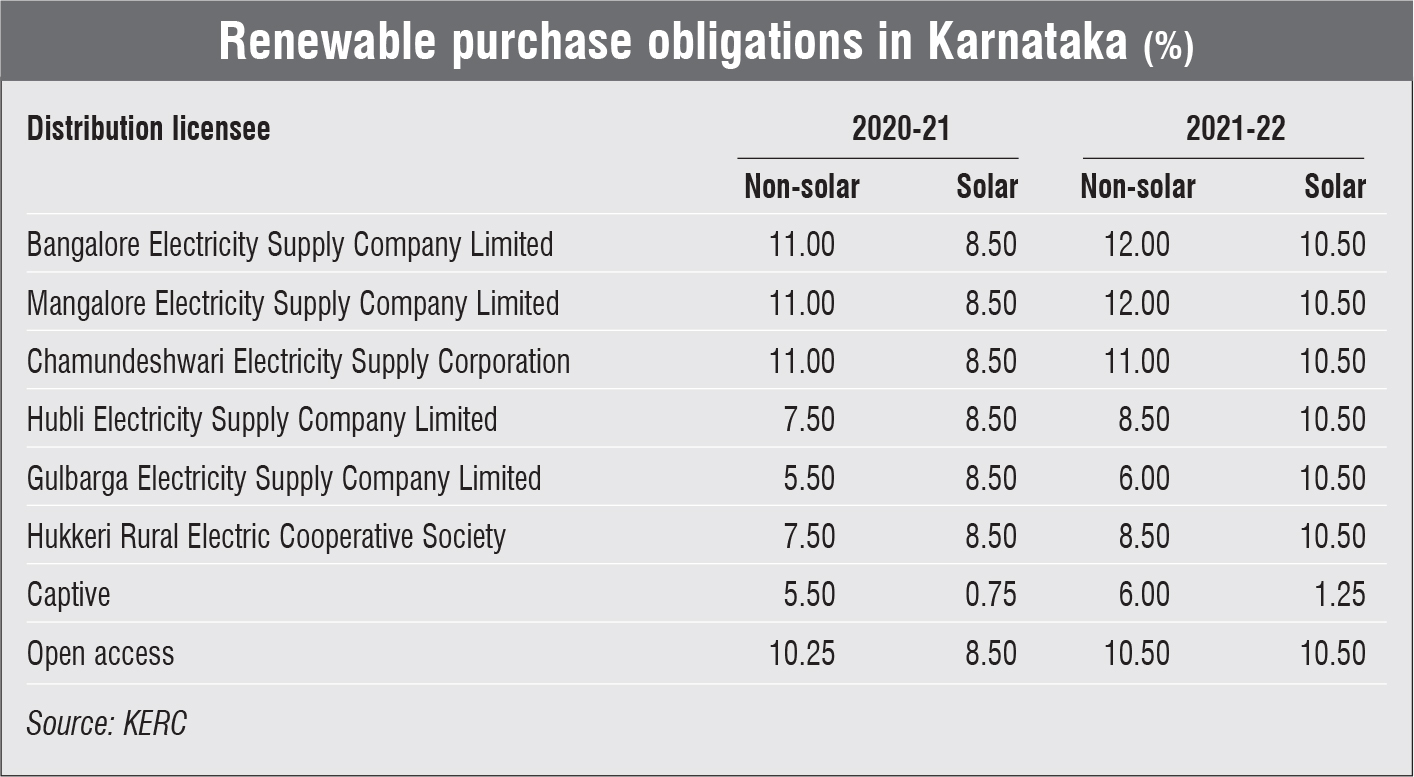 With a good solar and wind potential, financially sound discoms and an enabling policy environment, Karnataka has long been a favourable destination for renewable power investors. Given that Karnataka has the highest renewable energy capacity across all states, it shall continue to retain its leadership position.  Further, renewable purchase obligations (RPOs) are expected to keep the renewable energy growth on track. The RPOs have been determined up to financial year 2021-22 for distribution licensees as well as captive and open access consumers in Karnataka and this will enable more renewable energy capacity installation in the state.

However, as Karnataka’s renewable energy portfolio has expanded, a major concern that remains to be addressed is proper evacuation and transmission of power. Further, there is a need to fully develop and utilise corridors for interstate sale of energy for Karnataka to be able to harness its renewable energy potential beyond meeting intra-state demand. Thus, in order to attract more investments in the state, Karnataka is now focusing on strengthening its transmission infrastructure. The proposed policy is expected to help focus on the development of the green energy corridor for evacuation of power from large-scale renewable energy projects.

Finally, there has been a growing need for firm power, round-the-clock supply and peak power supply. Going forward, Karnataka is set to explore new and emerging technologies such as wind-solar hybrids and energy storage to achieve more reliable power supply and maintain its position as a renewable investment hotspot.