It has been roughly four years since the end of the feed-in tariff (FiT) era and the launch of competitive bidding for allocating wind power projects. However, the wind segment continues to be in a state of flux, with the ripples of this major transition continuing to be felt. Consequently, capacity additions have been restricted, with barely 2 GW of annual installations since 2017 and thousands of megawatts of projects remaining stuck due to land and transmission constraints and legacy power purchase agreement (PPA) issues.

Tendering activity has declined considerably, at both the central and the state level. A case in point is the latest wind auction by the Solar Energy Corporation of India (SECI) for 1.2 GW of capacity. The auction was held in March 2021, more than six months after the last one in August 2020. Moreover, the August 2020 auction was for wind power blended with solar and not stand-alone wind power. Thus, the last stand-alone auction was held in August 2019, roughly 18 months ago, indicating a huge gap in the tender trajectory.

Is this lag in tendering activity and capacity deployment due to policy barriers or a lack of interest from the industry? And how can the country revive its roughly three-decade-old wind power segment? Indeed, there are a host of new opportunities on the horizon in the form of hybrids, repowering of old wind plants and alternative procurement models. In this article, Renewable Watch assesses the recent tender results, the key barriers to uptake, enabling policy measures and the way forward for the segment…

In SECI’s latest March 2021 auction for developing 1.2 GW of interstate transmission system (ISTS)-connected wind projects (Tranche X), Adani Renewable Energy, Ayana Renewable Power, Evergreen Power and JSW Future Energy emerged as winners. Of the total capacity, Adani Renewable Energy won 300 MW of projects at a tariff of Rs 2.77 per kWh, the lowest tariff in the auction. Ayana Renewable Power won 300 MW, Evergreen Power won 150 MW and JSW Future Energy won 450 MW, all at a tariff of Rs 2.78 per kWh. In all, bids for a total of 3.15 GW of projects were received from 11 developers, with tariffs as high as Rs 3.39 per kWh.

The winning bid of Rs 2.77 per kWh is about 7 per cent lower than the lowest tariff discovered in the last SECI auction (Tranche IX) in August 2020 for 2.5 GW of wind power blended with solar power.

The blended power tender, which had a tariff ceiling of Rs 3 per kWh, was significantly undersubscribed, with only 970 MW of capacity awarded to two project developers – 160 MW to Vena Energy Vidhyuth Private Limited at a tariff of Rs 2.99 per kWh and 810 MW to JSW Solar at Rs 3 per kWh. No other developer had quoted a tariff of less than Rs 3 per unit.

The all-time-low tariff discovered for wind projects in India has been Rs 2.43 per kWh, quoted in Gujarat Urja Vikas Nigam Limited’s 500 MW auction in Gujarat in December 2017. However, for the past two years, wind tariffs have stayed firmly above the Rs 2.75 per kWh mark. The lowest tariff in the March 2021 auction is also at the same level, although the response to this tender has been noticeably better than to the heavily undersubscribed ones of the past two years.

Unlike its predecessors, this tender was oversubscribed by 2.5 times, which can be attributed to the meagre capacity additions that had been taking place. Developers’ new project pipelines had dried up due to the lack of tendering activity in the past few months and hence, everybody wanted a piece of this tender. Even on the state side, there had been no significant activity, barring a small 200 MW tender from Maharashtra State Electricity Distribution Company Limited (MSEDCL) for wind power projects in the state with PPAs that had expired or would be expiring soon. The question now is, will actual implementation take place of the newly auctioned capacity given that projects allocated in 2018 are yet to be commissioned due to a host of unresolved challenges. 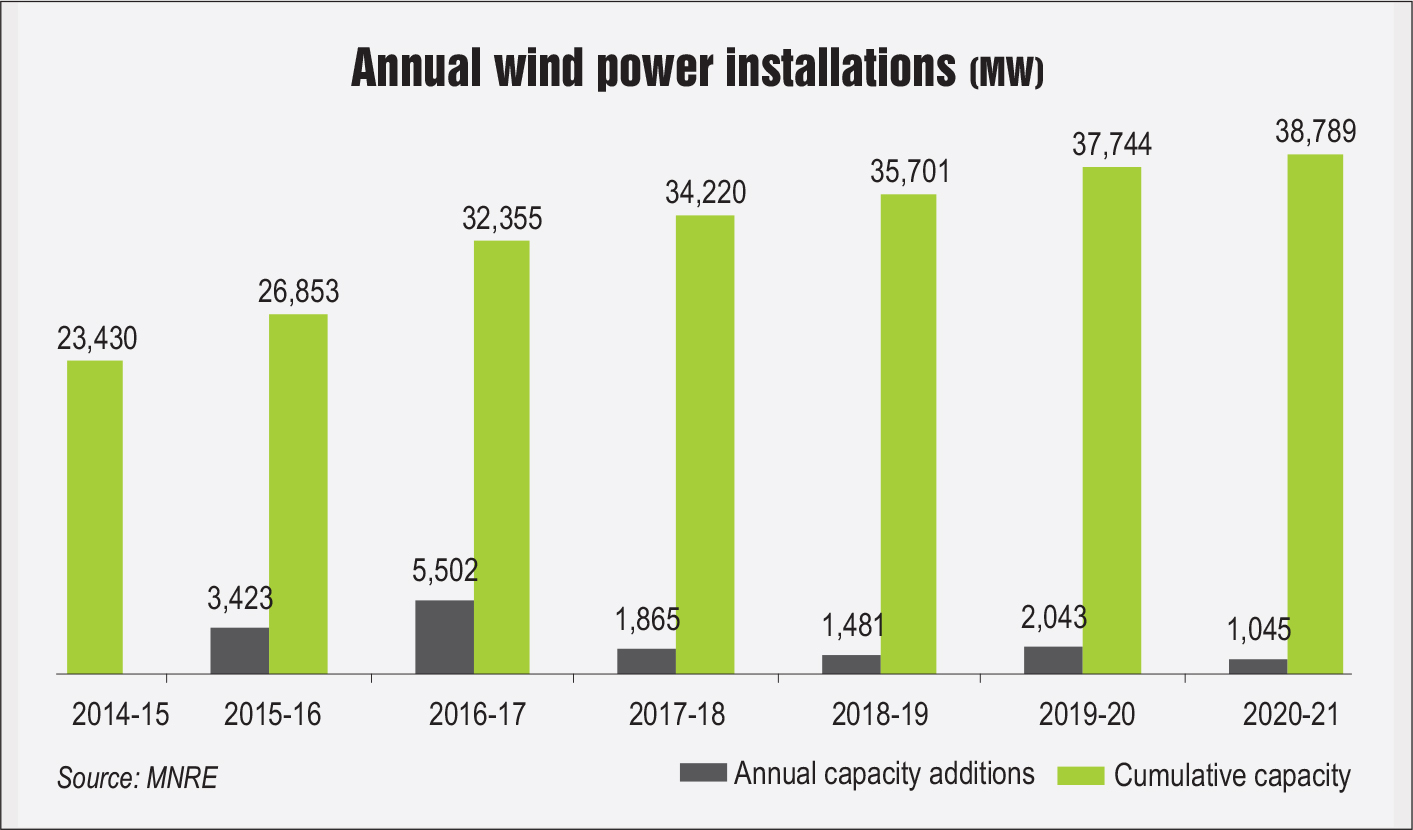 In March 2021, ReNew Power commissioned a 300 MW wind power plant in Gujarat, which was awarded to the company in SECI’s Tranche III auction held in February 2018, taking three years to be completed. Similarly, in July 2020, Sembcorp Energy India Limited completed 800 MW of wind power projects awarded to it by SECI. The first project of 250 MW was awarded in 2017 and was installed in 2018 in Tamil Nadu, on schedule. However, the other two projects with capacities of 250 MW (awarded in 2017) and 300 MW (awarded in 2018) were installed in Gujarat in 2020, indicating a significant lag between project allocation and completion. In fact, many projects auctioned more than two years back are still stuck in the construction phase due to some key challenges.

Land acquisition and transmission unavailability especially in wind-rich locations continue to be major problems for developers. A case in point is the Kachch region in Gujarat, which has excellent wind sites but severe transmission constraints. Most developers have planned their projects in this region but owing to the slow pace of implementation of transmission projects, the entire wind capacity is stranded at present. There have also been reports of complications in land acquisition in this region, which has further pushed out project timelines. In other states too, similar issues are being faced by project developers, which is severely hampering the country’s wind power growth story.

Meanwhile, there are lingering challenges of unpaid dues from discoms. In fact, as per the Ministry of Power (MoP), distribution companies have outstanding dues of about Rs 123.45 billion to renewable energy developers as of February 2021. This is a serious concern and impacts project returns and investor sentiment. In addition, there have been instances of contractual delays with allotted projects not getting PPA and tariff approvals for months. In other cases, states have tried to renegotiate signed contracts to bring tariffs down, putting the entire contract sanctity into question.

On the financing side, debt activity has been on the decline in recent years, primarily due to the fragile state of the banking sector and the volatility of the rupee in global markets. However, equity financing has gained traction as wind power projects continue to attract bigger investors with deep pockets that want to quickly expand their renewable energy portfolios in the country. For instance, in March 2021, ORIX Corporation acquired a 21.8 per cent stake in Greenko Energy Holdings by investing around $981 million in the latter. It has integrated its existing wind energy business, which includes projects with a cumulative capacity of 873 MW, with Greenko. Moreover, in November 2020, ReNew Power authorised the sale of its wind farms in Karnataka to Ayana Renewable for Rs 16 billion. The wind farms are in the Raichur, Bijapur, Belgaum, and Bellary districts of Karnataka and aggregate 300 MW of capacity. Similarly, in June 2020, Hindustan Zinc, a subsidiary of the Vedanta Group, announced plans to sell its wind energy assets of 273 MW, valued at around Rs 15 billion. Its wind projects are set up across Rajasthan, Gujarat, Maharashtra, Karnataka and Tamil Nadu.

On the manufacturing side, the biggest deal announcement was the acquisition of Senvion’s Indian operations by Global Renewable Energy Development Holding Company Limited (GREDHCL) in December 2020. The transaction will see GREDHCL acquiring complete ownership of Senvion India, including its factory, installed operations and maintenance base and ongoing projects in the Indian market. Going forward, consolidation activity will continue, as various risks make it tough for smaller companies to sustain themselves, thus making them easy targets for larger players. 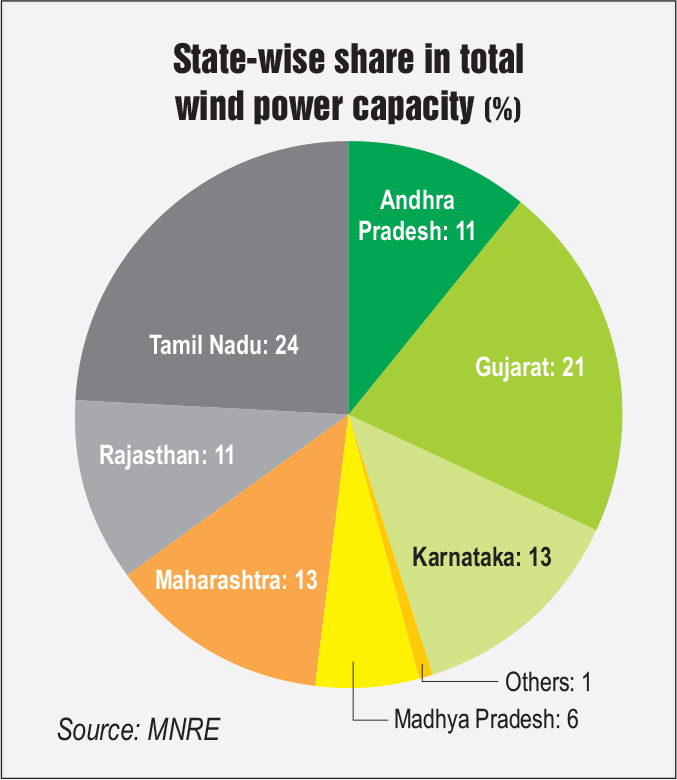 The government has been making efforts to improve investor sentiment towards the segment by announcing various policy measures. For instance, the MoP issued a notification in August 2020, extending the waiver of ISTS charges on the supply of solar and wind power until June 30, 2023, given the project delays on account of Covid-19. As per the notification, no ISTS charges will be levied for 25 years from the date of commissioning of the power plant. This move is intended to revive developer interest and ensure continued large investments in the renewables space. This long-term clarity on ISTS charges is another reason for the success of the recently concluded wind auction.

Moreover, there have been two recent policy developments to promote wind uptake. First, realising that solar is now more cost competitive, and thereby more attractive to discoms, the government in July 2020 decided to issue a policy for blending wind power with solar power. The scheme aims to provide a framework for the procurement of electricity from 2.5 GW of ISTS-connected wind power, along with up to 20 per cent of solar power. Second, in November 2020, the MNRE released a concept note on the development of wind parks and wind-solar hybrid parks of capacities greater than 500 MW at potential sites in Tamil Nadu, Andhra Pradesh, Karnataka, Gujarat, Rajasthan, Madhya Pradesh and Telangana.

There has also been greater focus on the hybridisation of renewable energy sources, and the results have been quite encouraging. For instance, in December 2020, SECI successfully allocated 1.2 GW of wind-solar hybrid capacity under Tranche III to four renewable energy developers – ABC Renewable Energy, Adani Renewable Energy Holding Eight Limited, AMP Energy and ACME Solar. The winning tariff discovered in the auction was Rs 2.41 per kWh, which represents the lowest ever recorded for wind-solar hybrid projects. This tariff is lower than the recently discovered wind power tariff, strongly indicating that hybridisation with solar power might be more cost effective than stand-alone wind power. Thus, going forward, more such auctions for hybrids as well as round-the-clock power procurement can be expected.

India’s wind industry has historically been an OEM-driven market rather than an IPP-based one. The market was concentrated in the hands of a few OEMs, which were setting the prices and enjoying high returns owing to FiTs. The introduction of competitive bidding changed that and made OEMs dependent on IPPs for orders as well as pricing. This hit the manufacturing industry hard as sales volumes declined and profit margins shrank. However, competitive bidding is a more transparent mechanism than FiT and creates scope for innovation and competition, thus representing the way forward for the country. In time, the industry will adapt accordingly, as is the case following any policy disruption. As it is, the removal of tariff caps on tenders and the waiver of ISTS charges have taken away the price pressure and improved the prospects for both developers and manufacturers.

Going forward, capacity deployments will need to pick up pace, not only to serve the interests of IPPs and meet government targets but also to enhance OEMs’ sales volumes. For this, the wind power segment needs a multi-procurement model. The repowering of old wind turbines using newer and more advanced technology can help in better utilisation of wind-rich sites that are currently not meeting their full potential. Moreover, while large auctions continue, smaller state-specific bids in wind-rich states can also be done, which will enable smaller IPPs to participate as well. Further, interstate captive and group captive projects should be promoted to enable greater investments by the commercial and industrial segments, which had initially driven wind power growth in the country.

Summing up, India’s wind power market has been highly successful in attracting major global investors, utilities and suppliers for more than a quarter of the century. It still remains an attractive proposition, provided opportunities such as hybrids and repowering are capitalised on and multi-pronged development strategies are pursued.