India’s solar capacity stood at almost 37 GW, as of November 2020, increasing by leaps and bounds from less than 7 GW at end 2016. This growth in the solar power segment can be attributed to the utility-scale solar space, which has witnessed impressive and rapid capacity expansion, supported by falling tariffs, transparent auctions, policy push and offtaker interest. The rooftop solar space has also grown, albeit not at the same scale and size as utility-scale solar. Solar inverters, which are responsible for converting direct current (DC) of solar modules into the usable alternating current (AC) of the grid and are one of the most critical components, have also evolved in this journey. Capacity installations, declining tariffs and changing operations and maintenance (O&M) requirements have all impacted the growth of the solar inverter industry – in terms of technology and market players.

Traditionally, central inverters dominated the Indian solar inverter market as much of the growth occurred in the larger utility-scale space. In this set-up, all solar arrays are connected to a few or even just one central inverter. The gradual growth of rooftop solar projects in recent years has led to an increase in the uptake of string inverters. In this case, a string or row of solar panels is independently attached to one string inverter.

While the use of a small number of central inverters minimises the connections required and makes monitoring easy, string inverters offer high modularity along with easy repair and replacement, as any defect in one string of solar panels or one string inverter does not impact other solar panels, thereby reducing project downtime. Lately, string inverters are being considered for utility-scale projects as well owing to their modular design and easy maintenance.

This modularity is also leading to the increased adoption of microinverters, especially in small-scale projects. These microinverters are installed on each module, and hence convert DC power to AC power at the module level only. This means the performance of each individual panel can be monitored. Moreover, if a solar panel is shaded, it does not affect the performance of other panels, since DC to AC conversion happens at the panel level itself. However, the cost of micro inverters is high and this makes developers opt for other more cost-effective inverter options.

Another key trend in the solar inverter space is the development of smart modules, that is, modules that are integrated with power optimisers. However, the uptake of this technology, just like micro  inverters, is restricted to small-scale projects and it may take some time before power optimisers gain acceptance in utility-scale installations. Further, smart hybrid inverters are being developed to bring in more flexibility and automate the management of energy supply from different sources (solar PV, grid and batteries). Virtual central inverters, which are a combination of string inverters and modular central inverters, are also being considered by many developers as they offer better control and flexibility.

Finally, with the increasing number, scale and size of solar installations, proper O&M of inverters as well as of the entire project is crucial. Thus, inverters are being integrated with various automation and digitalisation tools for effective and less complex O&M. Artificial intelligence and machine learning, combined with advanced sensors, cloud computing and remote monitoring technologies, are being used to enable easy maintenance as well as the upkeep of assets. Data communication tools allow remote detection and even resolution of faults, thereby, immensely improving efficiency and reducing the cost of solar O&M. 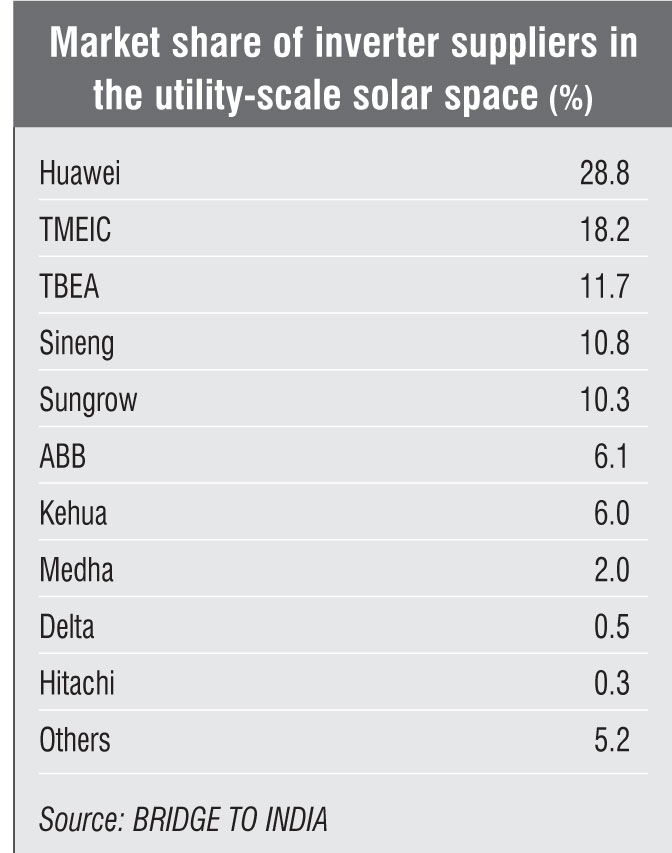 According to BRIDGE TO INDIA, the total market size of utility-scale solar inverters in India was 4,971 MWac during the period from July 2019 to June 2020. Huawei emerged as the leader with 28.8 per cent of the total market share. It was followed by the Toshiba Mitsubishi-Electric Industrial Systems Corporation (TMEIC) with roughly 18.2 per cent share in the total installations. Other leading players that captured significant market shares were TBEA at 11.7 per cent, Sineng at 10.8 per cent and Sungrow at 10.3 per cent. These top five players together make up about 80 per cent of the total market share in the utility-scale solar space. Other market players are ABB (6.1 per cent), Kehua (6 per cent), Medha (2 per cent), Delta (0.5 per cent) and Hitachi (0.3 per cent).

In the rooftop solar segment, capacity addition during the same period was 1,140 MW. Growatt emerged as the largest supplier by market share, at 23.3 per cent. It was followed by Sungrow with 22.9 per cent, Solis with 14 per cent, GoodWe with 12.2 per cent and Delta with 8.6 per cent market share. These top five players accounted for about 81 per cent of the market share. Other leading players are Huawei, SolarEdge, Havells, SMA, Fronius, Statcon and ABB.

In India’s competitive and extremely price-sensitive solar market, it is common for player rankings to change every year. Moreover, it is not uncommon for certain players to drop off from these rankings as newer companies offering more cost efficient products enter the market. For instance, in the utility-scale space, TMEIC, Sungrow and ABB ranked first, third and fourth, respectively, last year; however,

they have all seen a dip in their rankings. Meanwhile, Sineng, a new entry in this top inverter supplier list, has straight away jumped to the fourth position.

These market upheavals are also prevalent in the rooftop solar space. A case in point is Growatt, which ranked seventh last year. It has become the top player with the largest market share. Meanwhile, ABB was among the top five suppliers in the previous year’s rankings and is now not even in the top 10. In fact, ABB has exited the solar inverter market altogether, and in March 2020, the company completed the divestment of its solar inverter business to the Italian company FIMER SpA. 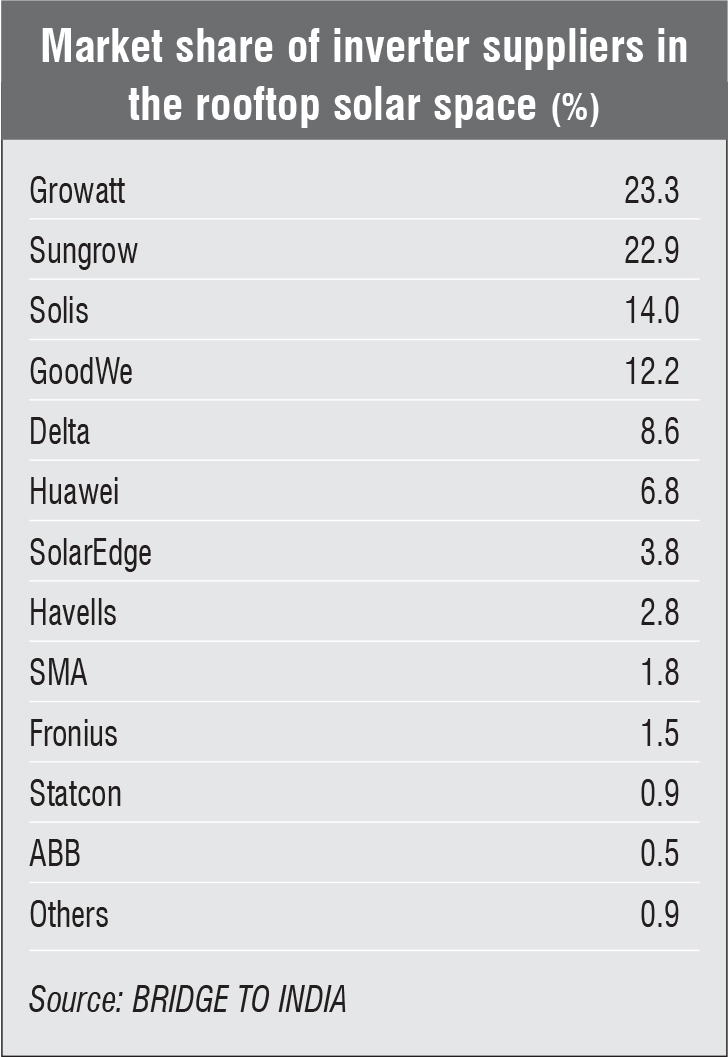 The other trend that has emerged in the utility-scale and rooftop solar segments points to a growing preference for regional players from Asian markets such as China, Korea and Japan. This could be due to the increasing cost competitiveness of Asian products, particularly Chinese, over the more expensive European inverters. The preference for cheaper products is likely to continue in India, especially with solar tariffs dropping rapidly to even Rs 2 per unit level, in recent auctions.

Meanwhile, not many Indian manufacturers produce solar inverters at the moment and those that do, find it hard to compete with their foreign counterparts. Further, even manufacturing-linked incentives and policies are yet to bear fruit and the contribution of domestic players in the market share remains small. However, the manufacturing sector in India is already beginning to show positive signs, supported by the government’s Make in India initiative and the supply chain restrictions on imports during the initial months of the Covid-19 breakout. This situation is expected to improve further as profit margins improve for domestic players in the near future.

The solar inverter market will continue to grow at a rapid pace, as the country moves ahead with its plans to deploy massive solar capacities. While the majority of this capacity expansion will be carried out with foreign-manufactured inverters in the near term, increasing impetus to domestic manufacturing combined with industry appetite for local goods might tip the scale in their favour in the long term. Going forward, this will require incentives for the adoption of advanced and efficient production technologies to reduce manufacturing costs, and policy support to make local products more competitive with foreign inverters.

There is little doubt about the importance of electricity for the economic and social development of an economy. Yet, more than a billion people across the globe do not have access to electricity and many of […]

With the growing focus on renewable energy, the power sector across the world is currently undergoing transformation, moving from conventional to alternative sources of energy. In some countries, the annual renewable capacity addition has surpassed […]

Ocean energy or marine energy inclu­des all forms of renewable energy de­­ri­ved from the ocean including wa­ve, tidal, current, salinity-gradient energy and ocean thermal energy conversion (OTEC). In August 2019, the Ministry of New and […]