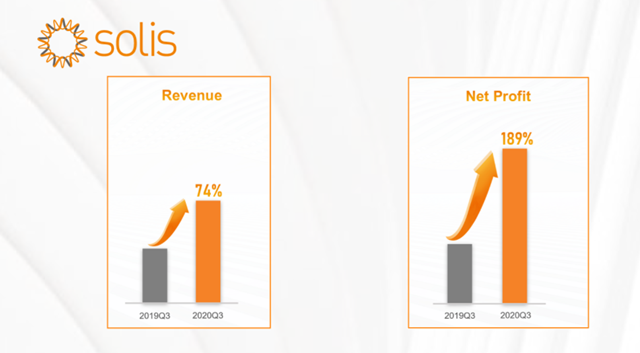 After the announcement of the results the company’s stock price continued to rise throughout the day on Thursday 21st Oct 2020. As the markets closed, Ginlong Solis shares stood at $US18.23 per share, an increase of 4.56%., once again becoming one of the A-share green concept stocks with a high increase. What is driving this enthusiasm about Ginlong Solis stocks?

Through the expansion of sales and the strengthening of the company’s accounts receivable collection efforts, the company’s “cash received from selling products and providing labor services” reached US$149.6 million, a year-on-year increase of 67%. The company’s “net operating cash” has reached a historic high due to its overall revenue and ample cash on hand.

“During the reporting period, COVID-19 brought some inevitable pressure and challenges to our business and others. However, through the dedication of all of our colleagues, the company’s capacity rapidly recovered and then increased to seize more domestic and overseas market share through the positive response of the company.” said Yiming Wang, President of Solis (Ginlong Technologies).

In terms of overall operation and operating costs, Solis is currently well-managed. Its bills and accounts receivable fell by 13% year-on-year, and accounts receivable fell by 12% year-on-year. Of course, because of the expansion of the company’s production and operation facilities, its investment in fixed assets and projects under construction has increased, paving the way for the forecasted increase of distributed business from 2021.

At present, Ginlong Solis expects that it will raise over $100M USD. Work has started to build the second production base, which is mainly used for the construction of fixed-increasing projects with an annual output capacity of 400,000 inverters (including 300,000 string grid-connected inverters, and 100,000 energy storage inverters). The company’s current product line covers all inverters from 0.7kW to 255kW. If the average power of each inverter reaches 40kW, after the completion of the new facility, the total production capacity of Ginlong Solis will exceed 20GW. Through the implementation of this plan, its string inverter production scale and market share are expected to further expand. In addition, the company has launched inverter Solis-255K-EHV, suitable for ground mount PV Power stations and it is expected that its overall market share of PV inverters will increase.

Although sales are expanding, Solis’ fees have not exceeded sales growth. Because of its R&D needs, the company is still investing in the development of innovative products. The R&D expenses in the first three quarters of 2020 showed a year-on-year increase of 118%.

Established in 2005, Ginlong Technologies (Stock Code: 300763.SZ) is one of the most experienced and largest manufacturers of solar inverters. Presented under the Solis brand, the company’s portfolio uses innovative string inverter technology to deliver first-class reliability that has been validated under the most stringent international certifications. Armed with a global supply chain, world-class R&D and manufacturing capabilities, Ginlong optimizes its Solis inverters for each regional market, servicing and supporting its customers with its team of local experts. For more information on how cost-effective Solis delivers value while maximizing reliability for residential, commercial, and utility customers, go to www.solisinverters.com.