Headquartered in Bengaluru, Karnataka, SunMoksha was set up by Dr Ashok Das with a vision to improve energy access for rural and poor communities in non-electrified villages across India. While the national grid has expanded at a good pace, several challenges remain. One, power generation has not kept pace with increased grid access. This is especially evident in rural areas, where electricity demand has been increasing but villagers do not receive regular supply of electricity. Moreover, there is an ongoing debate over the massive investments required to build grid infrastructure in order to reach remote villages. Apart from the high upfront investment involved, transmission and distribution losses add to the running costs of grid infrastructure. Often the grid infrastructure remains idle after it has been developed, thereby leading to wasteful expenditure. Also, power generation in villages happens at a very low scale across India.

As a solution to all these issues, decentralised renewable energy systems and microgrids are becoming popular. However, the uptake of these systems has been low due to several challenges. One, the traditional approach is to focus on energy supply rather than demand management, which makes microgrids inefficient. Two, there is a focus on single source of power generation, which reduces the scope of microgrids. Three, there are operational issues related to the collection of electricity bills from customers; the rate of non-payment of bills by villagers is also high due to low use of technology. Four, getting skilled personnel to teach the necessary technology to villagers is difficult. Five, lack of access to finance and a sustainable business model is a problem.

To address these issues, SunMoksha has developed Smart Nanogrid™ technology, which allows automated remote monitoring, management and maintenance of microgrids, and demand-supply management on mobile devices. It assists in dynamic balancing of different renewable energy sources, including solar, wind and bioenergy.

It also helps with metering, billing and payment, and sending alerts. The software cuts off power supply automatically if bills are unpaid, or if a consumer exceeds the maximum power allocated to them. Moreover, the software provides differential tariffs for business, irrigation, and household consumers. It schedules demand for microenterprises, irrigation pumps and street lights. In addition, the time and amount of irrigation can be controlled by measuring the moisture of the soil in the region. The software also manages demand vis-a-vis available energy supply and storage capacity.

The data collected by the software is available to all remote stakeholders, such as sponsors, government agencies, implementers, O&M   providers, and remote experts, for monitoring and timely interventions.

The technology also allows for the utilisation of the existing grid infrastructure to improve efficiency. The company partners with grassroots-level organisations to provide a scalable and sustainable business model. It also partners with technical, vocational and business institutions to develop skill-sets and entrepreneurial capacity in villagers.

SunMoksha set up a 30 kWp solar-powered Smart Nanogrid™ in Chhotkei. Of this, 20 kWp was designed to meet the energy demands of the households and power the streetlights, a temple, and community centres. The remaining 10 kWp was designed for daytime to run irrigation pumps and microenterprises, including stitching, rice-puff machines, provision stores and refrigerators.

According to the company, within a year of project implementation, significant positive developments took place at Chhotkei. One, children started studying in the evening. Two, reverse migration took place, as the youth now had access to opportunities to set up new microenterprises. Three, agricultural output increased, as farmers started acquiring irrigation pumps to grow more crops. Four, social interaction increased with the installation of street lights. The company also hired and trained local villagers for project implementation and O&M of the system.

The project received financial assistance from Wartsila India, a Finland-based multinational corporation, under its corporate social responsibility initiative. The initial setup costs were provided by Wartsila India, while SunMoksha handled the ongoing expenses. The Odisha Renewable Energy Development Agency helped SunMoksha in interacting with local government agencies, gathering support from villagers, and receiving the necessary permissions and bureaucratic support. SunMoksha also collaborated with the National Institute of Science and Technology (NIST) to set up a laboratory at NIST for conducting research and development activities for the project. 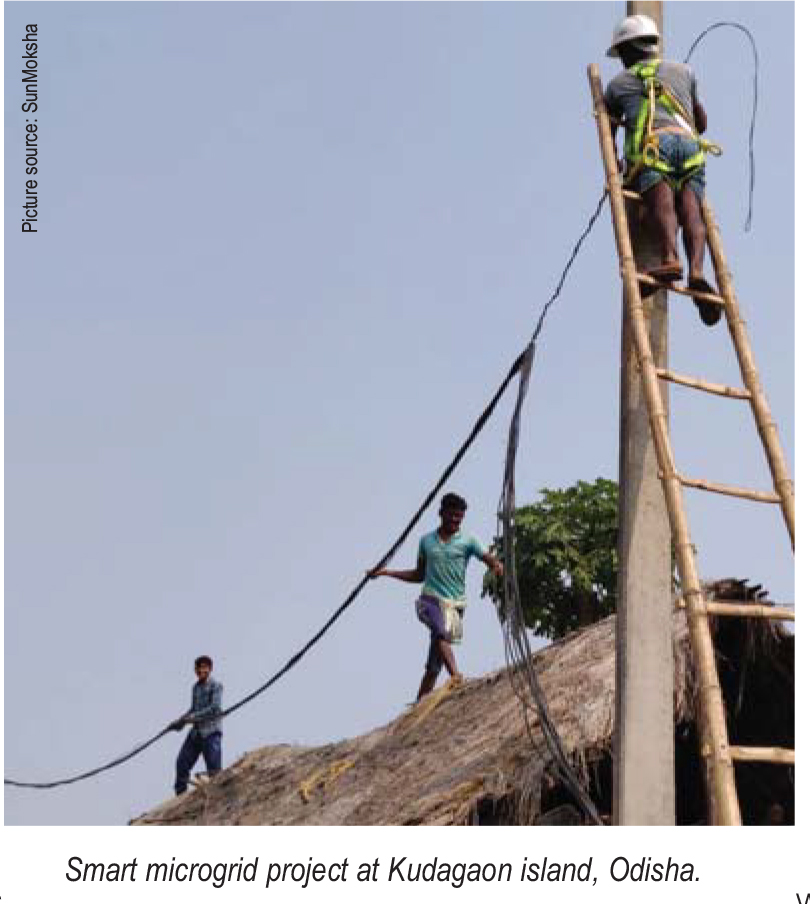 SunMoksha has  implemented  a smart-microgrid  project  at  Kudagaon Island in Angul district, Odisha. As the island is cut off from the mainland, distribution companies cannot operate in the village. Moreover, due to lack of irrigation facilities, the villagers could only engage in agricultural activities during the monsoon season.

To   solve   this   issue,   SunMoksha installed a 20 kW solar power plant with 72 kWh battery backup. Apart from providing lighting, the power plant has been  designed  to  support  the development of microeconomic zone. Now, sufficient electricity is available to support irrigation and other microenterprises during the day, and provide reliable power for lighting, fans, and TVs at night.

Significant changes in the lifestyle of the villagers were observed within a few months of the plant’s installation. Like in Chhotkei village, many families started setting evening studying hours for their children. Household lights and streetlights enabled movement, socialising and entertainment in the evenings. Moreover, farmers could now have a steady source of water supply through electric pumps, however, unavailability of underground water is causing hurdles. Villagers also want to start flour mills, rice mills and cold storages in the village, thereby leading to village development. 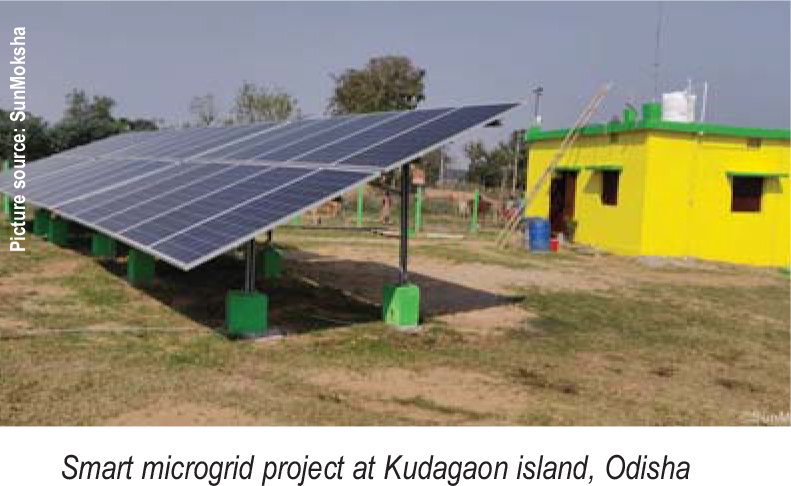 SunMoksha set up a 3 HP solar pumping  solution in Maudigudi, Odisha. The pump uses the Smart AQUAnet™ technology developed by the company and serves over 41 farmers. Prior to this, the farmers would cultivate only one crop, during the rainy season. Now, with the installation of the solar pump, farmers are able to cultivate three crops per year. This has led to a ten-fold increase in the income of the farmers. The technology also helps in the responsible use of water by assisting precision agriculture.

In Rengalpadu, Odisha, SunMoksha has set up another 3 HP solar pump, which uses the Smart AQUAnet™ technology and serves over 28 farmers. Here, the company wanted to use the technology for fertigation, through which the right quantity of fertilisers could be delivered to the right farmland with the right mix of water. To this end, the concept of shared irrigation as a paid utility service for the farmers was introduced in the village.

Despite building innovative technology for renewable energy-based microgrids and irrigation, the company faces tough challenges going forward. This is so because the entire renewable microgrid space in India faces a grim future. One, there is a lack of proper policy arrangements providing long-term visibility to microgrid companies. Two, these companies have to compete with the national grid, which is now reaching even the most remote villages. Still, rural communities are slowly shifting to microgrids as they are experiencing the perils of irregular grid power supply. Keeping this in mind, large companies such as Tata Power plan to invest heavily in the microgrid space in India. These positive developments will undoubtedly help SunMoksha expand its portfolio. However, more work needs to be done on the policy side to give a fillip to the renewable microgrid segment before it is too late. This is because SunMoksha, which developed its entire technology in India to solve energy poverty in the country’s villages, is looking to expand its operations to African countries, where it feels the policy landscape is much more favourable.