Plenty of sunny days and a huge residential base places India’s residential segment at the forefront in terms of harnessing solar energy. This huge potential, which was mostly untapped for a long time, is slowly starting to exhibit growth. Key hurdles such as finance have been largely responsible for the limited uptake so far, but with evolving financial options and greater awareness, the residential solar segment is expected to grow. The 40 GW rooftop solar target is also a strong growth driver for the residential rooftop solar segment. In order to achieve this target, various policies and programmes have been announced to subsidise the cost of a plant. However, the current installed capacity is much lower than the potential in this segment.

As of March 2020, 79,950 residential consumers have installed rooftop solar systems amounting to a cumulative 322 MW of capacity by availing central financial assistance from the Ministry of New and Renewable Energy (MNRE), according to government statistics. Of this number, Gujarat accounted for a whopping 50,915 or about 64 per cent of all subsidised rooftop solar plants in the residential segment, with Maharashtra following at 5,531 installations for the same period.

Prior to the launch of Phase-II of the grid-connected rooftop solar programme, the MNRE had released a new proposal called SRISHTI (Sustainable Rooftop Implementation for Solar Transfiguration of India) in December 2017, to overhaul the existing rooftop solar implementation mechanism by making it the responsibility of discoms. The said proposal was supposed to be considered as Phase-II of the programme after its approval. However, SRISHTI was never approved and after a long period of inactivity on the policy front, the Grid Connected Rooftop Solar PV Programme Phase – II was launched in March 2019. Realising the role of discoms in the mass uptake of rooftop solar systems, the government decided to increase the role of discoms under Phase II by providing performance-based incentives to them. The approved programme has increased the subsidies for the residential segment and is a much-needed policy move.

The World Resources Institute (WRI) released a research paper earlier this year titled “Assessing Clean Energy Opportunities Through Demand Aggregation in Bengaluru’s Apartment Buildings”. Having scanned 10 residential apartment complexes for over a year, the research paper concludes that there is significant energy consumption in the common areas of residential complexes. The common services defacto represent the aggregate demand for energy in the complex and present an opportunity for setting up solar power plants to meet this demand. With large residential complexes cropping up in big cities, the community solar model is increasingly gaining popularity. This model is ideal for consumers who do not have access to large independent roofs and stay in apartments or own offices in common buildings with shared roofs.

In the community solar model, discoms undertake demand and capacity aggregation of willing consumers in a particular area. This can work by way of two models: An upfront payment model and a subscription-based model. The first is where owners jointly finance and own the rooftop solar plant set up on community centres or shared rooftops. Developers install the system at lower capex and consumers pay an upfront capital cost to developers. Consumers then go on to sell power to discoms under the virtual net metering framework. The second is where developers finance and own community-based rooftop solar plants. Developers sell power to discoms at a pre-determined tariff. In this case, willing consumers pay a subscription charge to discoms for the rooftop solar power, which is then passed on to developers.

Cities such as Bengaluru, Gurgaon, Mumbai, New Delhi and Pune are among those leading the way with various residential societies across these cities installing rooftop solar projects. An example of a discom-led initiative is the effort of BSES Rajdhani, which, in collaboration with TERI and the German organisation GIZ, installed rooftop solar plants of 1.5 MW capacity in 25 societies in Dwarka under the Solar City Initiative. In the second phase of the initiative, the Shakur Basti area will be covered. Further, under the Suprabhaprogramme led by the World Bank, BSES Yamuna Power has approached about 300 housing societies in East Delhi for solar rooftop uptake. In fact, power discoms in New Delhi have witnessed an upward trend in the uptake of residential solar rooftops, accounting for over half of the 3,700 net metering connections set up over the recent years. 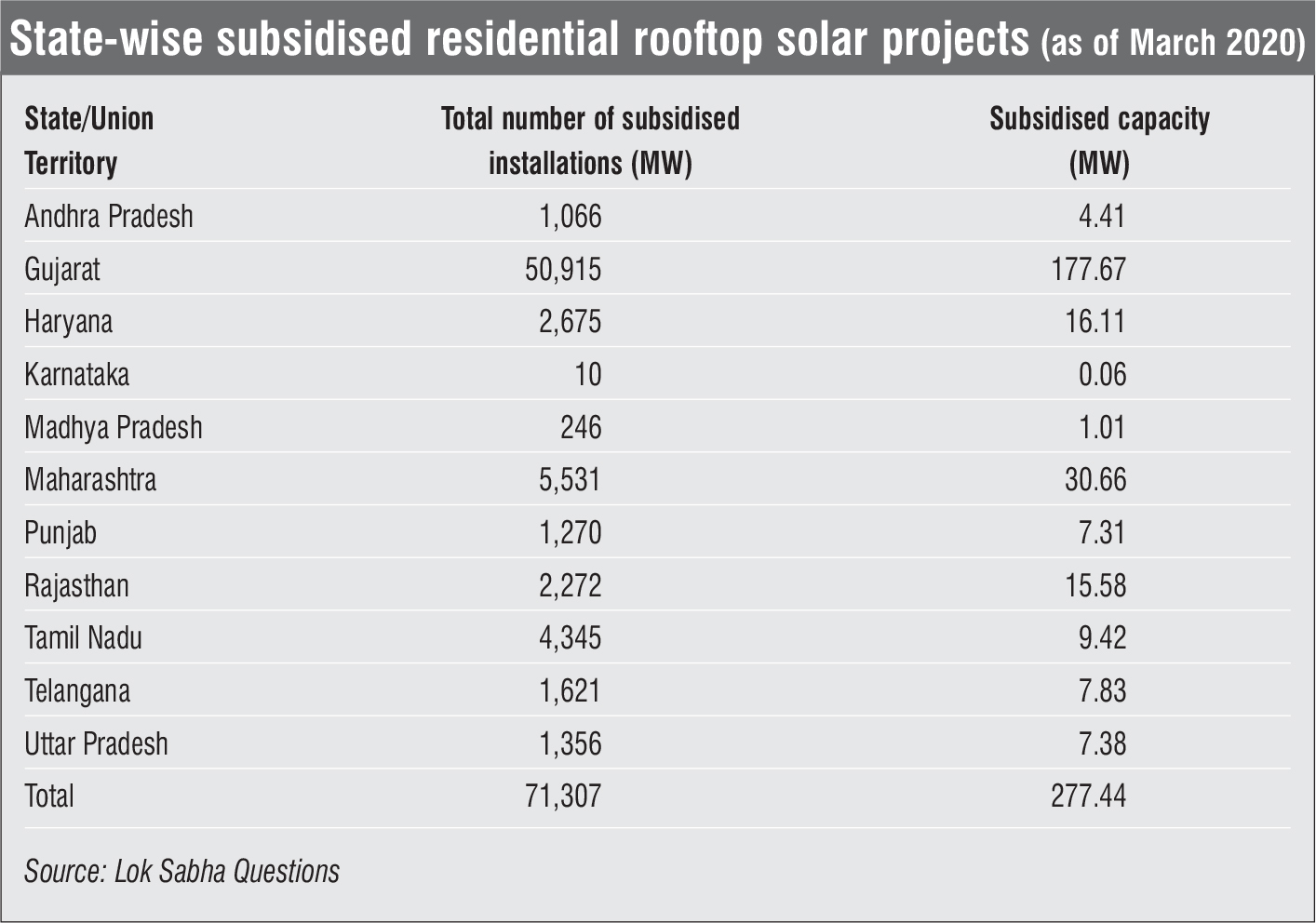 The capital cost of solar rooftop systems is high for residential consumers. Thus, only certain consumers can afford these systems. To address this issue, the solar power developers that set up such systems in the residential segment often provide financing options. For instance, Oorjan provides turnkey projects to consumers; this includes funding. Its offerings include solar products, installations, maintenance as well as easy financing options. Tata Power Solar also offers a bouquet of services for its residential consumers, including project financing. Consumers can also avail the MNRE subsidy on capital cost, which is between 20-40 per cent (up to 10 kW) for residential consumers and 20 per cent (up to 500 kW) for group housing societies, depending on the capacity of the solar plant.

Under the utility-led approach, two types of models are available for financing. The first is an on-bill financing model, which is ideal for consumers who do not have access to suitable financing options. In this model, the discom finances the solar rooftop system while the consumer is the owner of the system. The discom pays the capital cost for installing this system to a developer, and gets paid a monthly service tariff by the consumer which is included in the latter’s electricity bill. The second type of model is the solar partners model. In this case, discoms aggregate demand and select a developer through reverse auction. Since developers finance, own and install the solar rooftop system, consumers do not have to worry about the hassle of operation and maintenance, procuring expensive loans or getting metering approvals. The solar partners model is becoming popular especially in large cities due to increasing demand for cheaper power, lower risk of project failure owing to multiple consumers, and active participation of discoms. Going forward, this demand is likely to increase significantly due to increasing fuel costs, leading to larger project sizes and improved project economics.

While many residential societies in cities are increasingly setting up solar rooftop projects, many consumers, especially in smaller towns, are still unaware of the benefits of rooftop solar and government subsidies. There is also a huge gap in state-wise net metering regulations and their implementation, with consumers waiting for months for approvals. Moreover, for people living on rent, the uptake depends on the house owner. For apartments, it depends on the entire society.

The Indian policy environment is very uncertain, with new taxes and duties being implemented. The new Electricity Act Amendment is also expected to bring about a fresh set of changes. However, some of these changes may help the residential solar rooftop segment to become more viable. Residential consumers connected at the 11 kV and below level enjoy low tariffs at present, but they will have to pay a high price for power if discoms adopt cost-reflective tariffs. This would provide the necessary boost to make residential projects more financially viable.

The short-term outlook for the residential rooftop solar segment looks weak due to the lockdown imposed because of Covid-19. However, with continued reduction in capital cost, the development of new financing models and improved consumer awareness over time, this segment is expected to grow due to its consumer base, which is larger than in other segments. 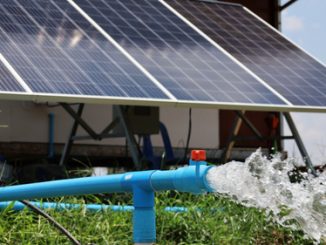 August 1, 2022
The Ministry of New and Renewable Energy (MNRE) released an expression of interest (EoI) to promote innovation in the solar pumping sector. The aim is...
More