Telangana has undergone a transformative journey from being a power-deficit state formed only six years ago to becoming one of the leading states in solar power development. The state has built a unique model of decentralised solar development. This has helped reduce expenditure and increased the share of renewables in the state’s power sector. Going forward, the state has a range of initiatives lined up to maximise its potential.

In 2019-20, Telangana continued to meet its power demand almost in full. The power demand stood at 68,306 MUs during the year, while the energy supplied was 68,303 MUs. The total installed power capacity stood at 16,394.43 MW as of July 2020, a 34 per cent increase over that in the previous year. Telangana has come a long way since its formation in June 2014. The state’s total power consumption was estimated at 6,500 MW at the time of its formation although its total contracted power capacity was just 4,500 MW.

Telangana’s renewable energy capacity has also been steadily increasing with solar leading the way. Renewable energy accounts for about 25 per cent of the state’s total installed power capacity. The wind and solar power capacities stood at 128 MW and 3,689.36 MW, respectively, as of July 2020. In 2019-20, the cumulative generation from renewable energy sources in Telangana was 6,794.24 MUs as compared to 7,046 MUs in the previous year. This translated into a renewables share of 11.58 per cent in the state’s total power generation. This significantly exceeds the renewable purchase obligation (RPO) target set for the state, which was 6.5 per cent for the year 2019-20. The RPO target for 2020-21 is 6.21 per cent for solar and 0.79 per cent for non-solar, making a total of 7 per cent.

Telangana has not witnessed any major tendering activity or policy developments in recent months. Activity was initially stalled due to elections and their expected impact on the state. The lull continued due to the coronavirus pandemic, which affected the country’s economy and industries on a large scale. The upcoming tenders will be managed by Telangana State Renewable Energy Development Corporation Limited (TSREDCO), the main agency responsible for renewable energy activity in the state.

Capacity installations in the biomass and wind power segments have also remained low as compared to solar power. While some wind power developers have come forward to set up capacity in the state with highly efficient turbines, their proposals have not been accepted.

Both state discoms have not performed well, receiving a credit grade of “B” and “B+” for the financial year 2017-18. The state discoms responsible for the distribution of power in the state are Northern Power Distribution Company of Telangana Limited (TSNPDCL) and Southern Power Distribution Company of Telangana Limited (TSSPDCL). They will also have to step up their game to support the progress in the renewables space. TSNPDCL is suffering from high aggregate technical and commercial losses. That said, the outlook for the solar segment in the state seems promising given its upward trajectory.

The solar resource is available across the state, whereas the wind and hydropower sources are available only in certain geographical pockets. Further, solar power projects have a shorter execution period, which gives them an edge over other renewable energy projects. The state is working towards creating a better infrastructure to support this power supply.

The state has adopted the decentralised model of solar power development instead of the solar park model. With the exception of one project of more than 100 MW, most solar projects in the state follow the decentralised model. The state preferred to set up projects across over 180 locations, instead of concentrating the capacity at one location. For making this model work, the state agencies initially carried out a detailed analysis of Telangana’s transmission and distribution (T&D) systems. To this end, the regions with gaps in their power demand and supply were identified and matched with areas with surplus T&D capacity. Thus, the entire solar power development in the state was carried out in a planned and systematic manner so as to prevent any burden on Telangana’s T&D system.

The solar power being generated is consumed close to the generation point, mainly supporting agricultural loads across the state. This has led to low T&D losses, thereby reducing the expenditure on infrastructure augmentation. As per ministry estimates, through the distributed solar installation model, the state has saved about Rs 4.5 billion on T&D network strengthening.

Telangana has a favourable environment for setting up rooftop solar projects. According to the SARAL rooftop attractiveness index, Telangana has been given a grade of “A++”, which is the highest grade, and the second rank in the country after Karnataka. The state has a rooftop solar capacity of 127 MW as of July 2020. Several urban local bodies are in the process of applying to set up grid-connected rooftop solar energy systems.

The state introduced a net metering policy in 2016. This policy applies to discoms, eligible consumers and third-party owners of rooftop solar projects in the state. The tariff paid to the customer will be based on the average power purchase cost to a discom. The policy includes exemptions from transmission charges and losses, distribution losses, wheeling charges and losses, and cross-subsidy surcharge and additional surcharge. A clean development mechanism benefit is also provided under the policy. The state runs a consumer facilitation programme for promoting rooftop projects. To this end, an online application process has been developed for securing connectivity. This programme facilitates feasibility studies, application, work completion, grid integration and subsidy receipt. 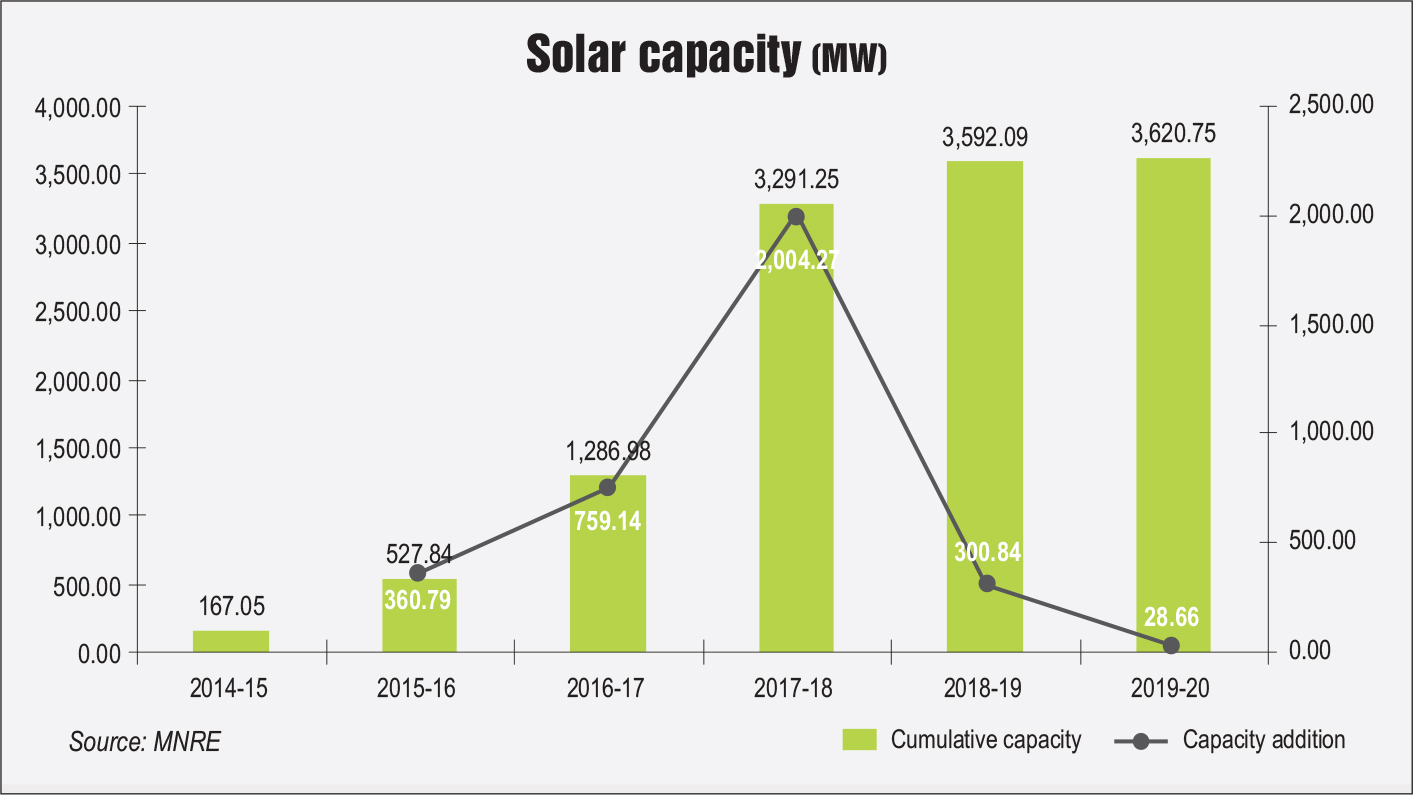 Further, it is planning to set up 81 MW of solar projects at its premises of SCCL in Telangana. These include 34 MW of ground-based solar power plants in Chennur and Kothagudam, 32 MW of overburden dump-based solar projects at Ramagundam and Dorli sites, and 15 MW of floating solar plants at its thermal power plant storage reservoir and Dorli open-cast project. Since March 2020, SECI has given multiple deadline extensions for these projects.

In June 2020, The National Solar Energy Federation of India (NSEFI) asked the state government to address the issue of the state load despatchcentre (SLDC) restricting solar power generation in the state. The NSEFI expressed concern about the state power transmission company issuing unwarranted directions to renewable energy generators to curtail their power output. Previously, the MNRE had issued directives stating that power generated from solar and wind-based sources must not be curtailed under normal circumstances. The federation urged the state to intervene if the SLDC curtails solar power, stating that it will be liable to compensate for any losses incurred by the generators. The NSEFI estimated losses of around Rs 275.10 million for generators. Last year, the state government announced plans to invite tenders for 1,000 MW of solar power. The chief minister instructed the finance department to prepare contingency plans to extend financial help to the electricity organisations as and when required. According to the minister, the solar power available at an economical rate should be procured to meet the heavy demand due to the Lift Irrigation Scheme. All these tenders are expected to aid the power supply in the agricultural sector and help achieve the state’s solar target for 2022.

The state has set a target of developing 5,000 MW of solar power capacity by 2022. The state’s long-term plan is to provide continuous power supply in rural areas through renewable energy sources, mainly solar power. In addition, there is a growing need for ancillary services such as storage solutions for the solar power being generated. Since Telangana already meets its energy demand, more renewable capacity will open up opportunities for exporting renewable energy to other states. This move will require augmentation of the transmission infrastructure as well as supporting developments on the policy front.

The Telangana government is planning to come up with a new solar policy to support the evolving renewable energy sector. According to Ajay Mishra, special chief secretary, Telangana, the solar policy announced about five years ago provided a push to the sunrise industry. “Having achieved its near-term goals, it is time to re-strategise and look at setting up more capacity by coming out with a new policy that is in tune with the changing requirements,” he says. The new policy is expected to take into consideration the lower project costs and recent changes in the renewable energy sector.