Renewable energy companies continue to battle financial issues. The economic slowdown caused by the Covid-19 pandemic has led to another setback for the industry. While the categorisation of the renewable energy sector as a priority sector by the government may provide some relief, issues such as pending dues from discoms and delayed project time lines continue to plague the industry. Renewable Watch analyses the financial results of select renewable energy companies for the January to March 2020 quarter, and assesses their performance and growth prospects…

The company has recorded revenue of  for the quarter ended March 2020. The company also recorded a net loss of Rs 394 million for the quarter ended March 31, 2020. In spite of an increase in revenue during the quarter, the company recorded a net loss as the charges outweighed the revenue. The quarterly losses included charges due to power curtailment in Andhra Pradesh, higher payroll charges related to management transition, stock appreciation accruals due to an increase in the share price during the quarter, charges related to loan refinancing, reinstatement of outstanding foreign currency loans owing to the depreciation of the rupee, and reversal of deferred tax assets due to lower taxes on intercompany margins earned by the EPC business.

The firm’s operating and committed capacity stood at 7,115 MW as of March 31, 2020, an increase of 112 per cent over the year ended March 31, 2019. In July 2020, Azure Power received a letter of award for 2 GW of capacity under the greenshoe option. The company also won 4 GW of capacity under SECI’s ISTS tender in December 2019. The company generated 868 million kWh of electricity during this quarter, an increase of 65 per cent over the previous year. The increase in electricity generation was mainly owing to the commissioning of new projects during the period.

The company expects the impact of the pandemic to be limited due to renewable energy being a priority sector. Earlier, in May 2020, Inox Wind’s wholly owned subsidiary, Inox Wind Infrastructure Services, sold its 51 per cent shareholding in Sri Pavan Energy Private Limited. The shareholding comprised 51,000 equity shares worth Rs 10 each.

Orient Green Power has announced a net profit of Rs 209 million for the financial year 2019-20. This is the first profit since the launch of the company’s Rs 9 billion initial public offering in 2010. The continued losses of the company have mainly been due to unpaid dues of state distribution companies, especially Tamil Nadu and Andhra Pradesh discoms. It also allocated 150 MW of installed capacity under the renewable energy certificate (REC) scheme, but the market value for RECs was very small until recently.

A few favourable developments took place over the past year. First, Orient Green Power won a case in Madhya Pradesh over fixed charges for its biomass plants. This resulted in the company receiving Rs 450 million from the Madhya Pradesh government as income. Second, the Andhra Pradesh government agreed to a tariff of Rs 4.70 per kWh and released Rs 230 million of the Rs 610 million claimed by the company. Third, when REC prices increased, the company fully liquidated its REC inventory to raise Rs 484.4 million. The interest costs for the company also declined to Rs 1.53 billion from Rs 1.65 billion in the previous year.

Suzlon Energy announced a net loss of Rs 8,342.2 million for the quarter ended March 31, 2020 as against a consolidated net loss of Rs 2,946.4 million in the quarter ended March 2019. Suzlon’s total income from operations fell to Rs 6,588.9 million from Rs 14,504.7 million during the same period. It continued to incur losses in 2019-20 primarily due to lower volumes and high finance costs.

According to company representatives, market growth remained restricted due to very low sales volumes and the country witnessed only 20 per cent capacity utilisation. Suzlon installed 350 MW during 2019-20 in spite of working capital constraints and debt restructuring. The market is now on the path to recovery. The tenders from earlier auctions are yet to close and the company is well positioned to take advantage of this opportunity. The successful completion of its debt restructuring has helped Suzlon reduce its fixed costs in 2019-20, thereby bringing down its break-even levels significantly. Further, the government’s thrust on self-reliance is expected to help Suzlon manufacture wind turbines and its components and reduce imports. 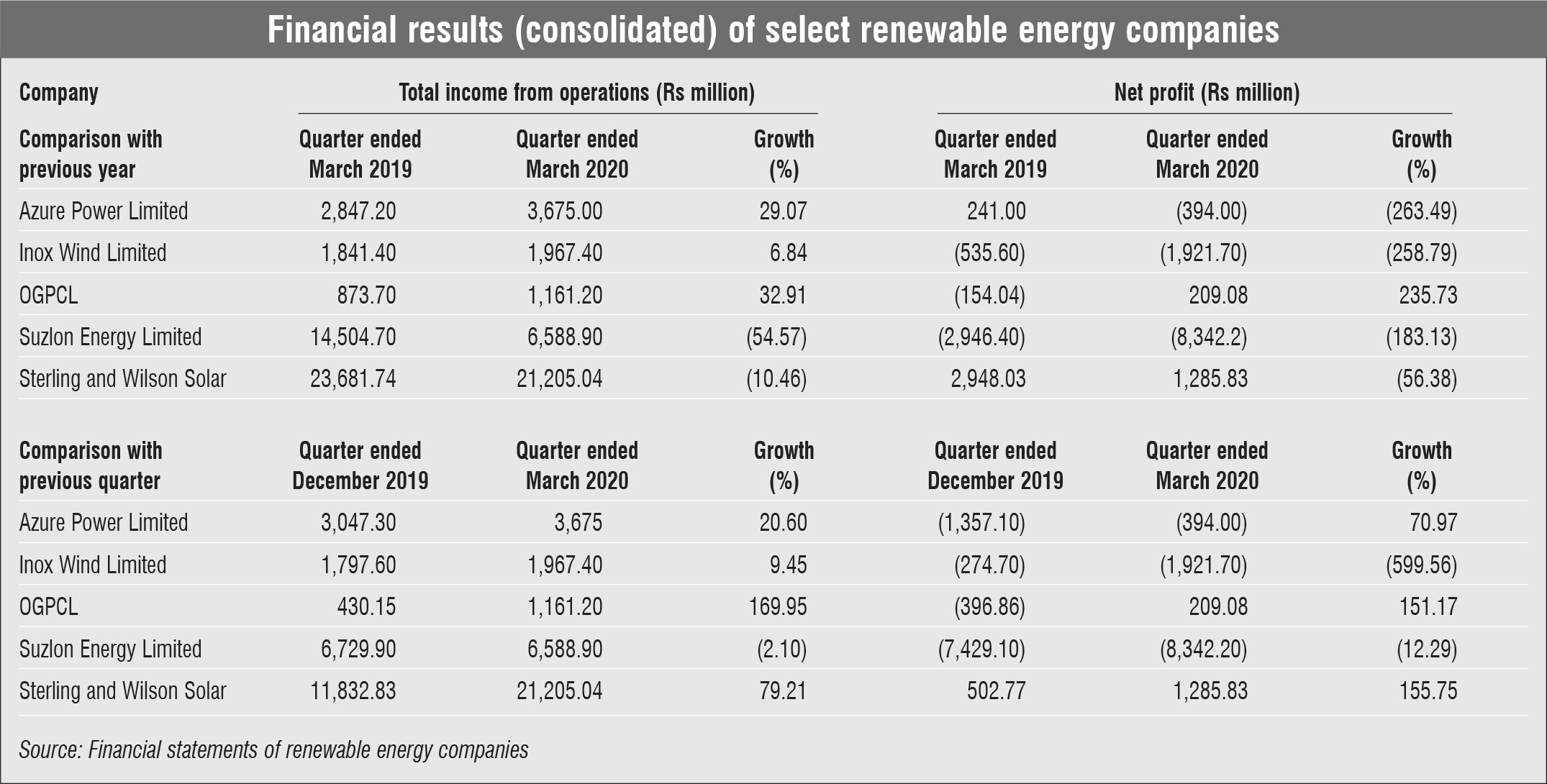 Companies such as Azure Power, Inox Wind and Suzlon experienced weak financials during the quarter ended March 2020. Despite an increase in revenue recorded by Azure Power and Inox wind, they witnessed a net loss. Orient Green saw an upturn in its profits, recording a positive net profit after a long time. Suzlon has suffered a dip in revenue, widening its losses by a considerable margin. While Sterling and Wilson maintained a positive net profit, it witnessed a decline in profit.

A Rs 900 billion bailout package for the power sector was announced by the government in May 2020. This is expected to support the liquidity of discoms, in turn helping renewable energy companies with restricted cashflows stay afloat amid the pandemic. Going forward, for renewable energy companies to turn a profitable, significant policy reforms would be required to ensure that they are duly and timely paid for every unit of power procured by discoms across the country.