Decentralised Energy Systems India (DESI Power) was established in 1996 by DrSharan, an energy scientist, along with his friend Dr Ashok Khosla, a social worker. After over 17 years of extensive research and professional background in the thermal power sector in Switzerland and in the renewables domain in Bharat Heavy Electricals Limited, DrSharan came up with the idea to set up DESI Power to address power supply woes in the rural regions of the country. The motivation behind setting up DESI Power was to develop decentralised renewable energy projects as the centralised power sector was often unable to meet the development needs of rural India. With the local generation of renewable energy for micro-enterprises, lighting, irrigation, clean cooking and water systems, food processing units and charging electric vehicles, the company wished to reduce air pollution, help in poverty alleviation through additional income sources for villagers and generate local jobs.

DESI Power’s first demonstration project was a 100 kW biomass gasification power plant set up in 1966 in Orchha, a town in Niwari district of Madhya Pradesh, India. This plant was set up in partnership with Development Alternatives, a non-government organisation started by DrKhosla. The plant was partly subsidised by the Ministry of New and Renewable Energy and co-promoted by FREND, a Swiss cooperative society that DrSharan was involved with during his years in Switzerland. The plant used locally available biomass in the form of a weed known as ipomea. The gas produced was cleaned and used with about 20 per cent diesel in dual fuel mode in a modified diesel generator set. The generated  electrical power from the plant was consumed by local microenterprises. After the successful commissioning of this project, the company developed a pure gas engine generator to avoid the use of diesel thus making the plants more environmentally sustainable. “Post this project, DESI Power set up around seven biomass gasification plants in Bengaluru, Vellore, Coimbatore, Tiruchirappalli, and near Tumkur. After these projects we moved our focus from urban areas to rural areas that were unelectrified and where villagers were mostly dependent on diesel or kerosene,” says Aklavya Sharan, director, DESI Power.

After commissioning this project, DESI Power entered the minigrid space in 1999 and has since set up around 60 minigrids (tinygrids) across Araria district in Bihar. The company also set up irrigation pumps along with these minigrids to provide timely and cheaper power compared to diesel pumps. With these benefits the crop rotation of farmers increased and farmers were able to grow three, and sometimes four, crops per year. “These services incentivised farmers to demand more electricity from us for their household use, which helped in our growth across these rural areas,” says Sharan.

DESI Power uses a similar business model. It builds minigrids that supply electricity to irrigation water pumps, agricultural facilities, shops and telecom towers. The sale of electricity to these consumers is the main revenue source for the company. The company charges these customers on the actual consumption of per unit of electricity, while a flat tariff is charged for residential consumers. With such separation and different tariff structures, the company is able to optimise revenue generation. The revenue is maximised as a fixed tariff for residential consumers, who have significantly less energy requirements, saves the cost of installing meters at their houses. The power consumption of these villagers can be assessed through centralised monitoring. However, the cost of installing meters is comparatively a smaller proportion of the revenue from commercial consumers who have higher energy requirements.

DESI Power also operates on a business acceleration model as it sets up irrigation pumps for farmers who consume electricity generated from its minigrids. The company is responsible for the inventory, maintenance and repair of the equipment. This model benefits consumers as they often either are unwilling to pay or cannot afford to pay upfront costs of equipment such as irrigation pumps. 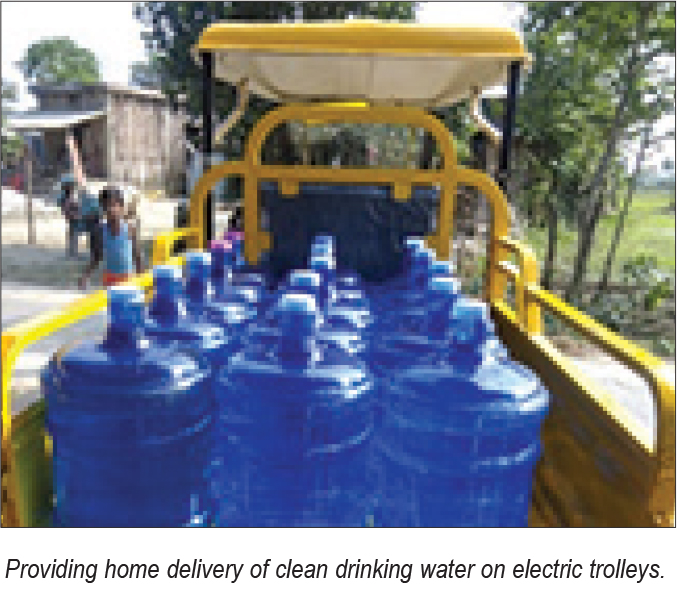 Paradoxically, the emergence of the national grid in all villages of Bihar has  partially challenged DrSharan’s perspective regarding the inability of the centralised power sector to meet the development needs of rural India. Though every village is grid-connected, the availability of electricity for village enterprises is limited. Frequent power cuts is a matter of concern for them as it hampers their socioeconomic development.

Therefore, these customers are still willing to pay a higher tariff (sometimes around Rs 15-Rs 16 per kWh) in order to receive consistent and high quality electricity from decentralised renewable energy plants and to avoid fixed charges for grid electricity (which is around Rs 9-Rs 11 per kWh including fixed charges). “We are now revamping our business model to compete with the grid. To meet this, we are moving towards serving more productive-use consumers rather than providing household lighting services,” says Sharan.

This is not the only challenge for the company. Overall, the development of the bioenergy sector has been pushed back and the focus has been mostly on promoting the solar sector. A lack of regulations to manage the volatile cost of biomass and the calculation of viable tariffs are hampering the growth of the sector. Moreover, a high upfront cost and additional expenses incurred on the transportation and storage of biomass reflect on high tariffs. According to Sharan, “It is hard for developers to keep negotiating for higher tariffs with consumers when cheaper grid electricity is readily available. Also, most of the distribution companies are in a dire financial condition and will be unwilling to purchase bioenergy at higher tariffs.”

To mitigate these hurdles, greater coordination between different ministries for making a policy and financing framework for the bioenergy sector, a robust microgrid policy that benefits all stakeholders, linking the farming of energy crops with the bioenergy plant, and formation of farmer producer organisations and farmer cooperatives for making the supply chain management of biomass more organised will be required.

DESI Power in particular needs to work on some of its weaknesses. As of today, the company’s operations are concentrated in just one district of Bihar and therefore it has to set up operations in different states to mitigate operational risks. Also, it has not yet tapped the bio-CNG segment which has a promising market in both urban and rural areas. Moreover, tariffs continue to be on the higher side and there are high chances that villagers will stop paying premiums once the quality and reliability of comparatively cheaper grid electricity improves.

The company is working on all of these weaknesses. To bring about economies of scale, it will be working with partners to replicate their existing model across atleast 100 villages in Bihar and Northeast as well. It is currently working on bio-CNG technology and will be setting up these plants in the future. DESI Power tries to cross subsidise the commercial users to reduce tariffs for domestic users. To reduce tariffs for commercial users it is promoting value added services such as mushroom cultivation, spice production which fetch better prices for the farmers and thus makes higher tariff viable.

If the company continues to work successfully on all of these fronts, it will be able to carve out a niche in the industry and adapt to the changing power sector dynamics.