With roughly 580 GW of capacity installed as of December 2019, global solar photovoltaic (PV) installations continue to grow at an unprecedented rate. Owing to rapid technology advancements, solar power has become one of the cheapest power sources worldwide in a span of only a few years. As manufacturers strive for greater market share, there is an increased focus on developing more efficient and cost-effective products. New cell and module designs are being explored with lesser and cheaper materials and revamping of production lines. Crystalline technology is no longer limited to monocrystalline and multicrystalline but has evolved into passivated emitter and rear cell (PERC), bifacial and half-cut cells, as the energy production from solar power plants continues to increase, resulting in greater cost efficiencies.

Technology developments in the solar PV industry have been very dynamic and it is quite difficult to predict which technology will become mainstream in the near future and for how long. For instance, multicrystalline and monocrystalline technologies have been the major PV technologies for a long time and they together account for the majority of the solar installations undertaken till date. However, multicrystalline technology is slowly becoming obsolete and will not survive in the market after five to six years due to its much lower efficiency compared to that of monocrystalline. As India is a highly price-sensitive market, historically, developers have preferred multicrystalline due to its lower costs. However, with a decline in global monocrystalline prices, a significant number of new installations in the country are being based on the latter technology, which is more efficient than multicrystalline and is less sensitive to high temperatures.

In the past few months, PERC has become the technology of choice in most countries, with over 90 per cent of the global investments in this technology. This is expected to be the mainstream for at least five to six years, owing to its high efficiencies. The efficiency of PERC modules is currently around 22.5 per cent. This is expected to increase to 23 per cent in the next one or two years. Thereafter, it is expected to give way to a new and more advanced technology, unless wafer sizes increase drastically to increase the wattage. For instance, it was initially believed that n-type cells would soon capture the market and p-type cells would slowly fade away. However, the general trend in the industry to increase the wafer size for increasing the wattage has delayed this possibility for p-type cells, which are here to stay. In fact, wafer sizes are increasing so rapidly that many manufacturers now design equipment for the highest wafer size and produce customised wafer sizes according to requirements. Another innovation at the cell and wafer level is the use of gallium-doped wafer instead of the commonly used boron so as to reduce light induced degradation in p-type cells and increase efficiencies.

Bifacial technology is one of the most promising new technologies in the solar PV space. Named bifacial because of their ability to generate electricity from both front and back of the modules, they produce power from the sunlight reflected from the ground on their back side. Thus, the total energy generation from bifacial modules is much higher than that from other modules, with estimates suggesting effective efficiency gains of 5-20 per cent over that of standard modules. According to the Fraunhofer Institute for Solar Energy Systems’ module technology division, nearly every cell producer that has upgraded to PERC is also working on bifacial technology. Thus, the number of manufacturers producing bifacial panels is increasing and there is a corresponding rise in the number of installations. In addition to bifacial, another technology gaining traction is heterojunction technology, which can be used in both mono- and bifacial solar cells. A lot of research is being done to make the technology affordable and mainstream. There has also been significant research and development in perovskite-based solar cells, resulting in efficiencies of over 20 per cent in lab-based PV devices. The research also explores the possibility of stacking perovskites over the existing thin-film technologies for both electrical and optical compatibility. Other emerging technologies include half-cut cells, shingling and overlapping. 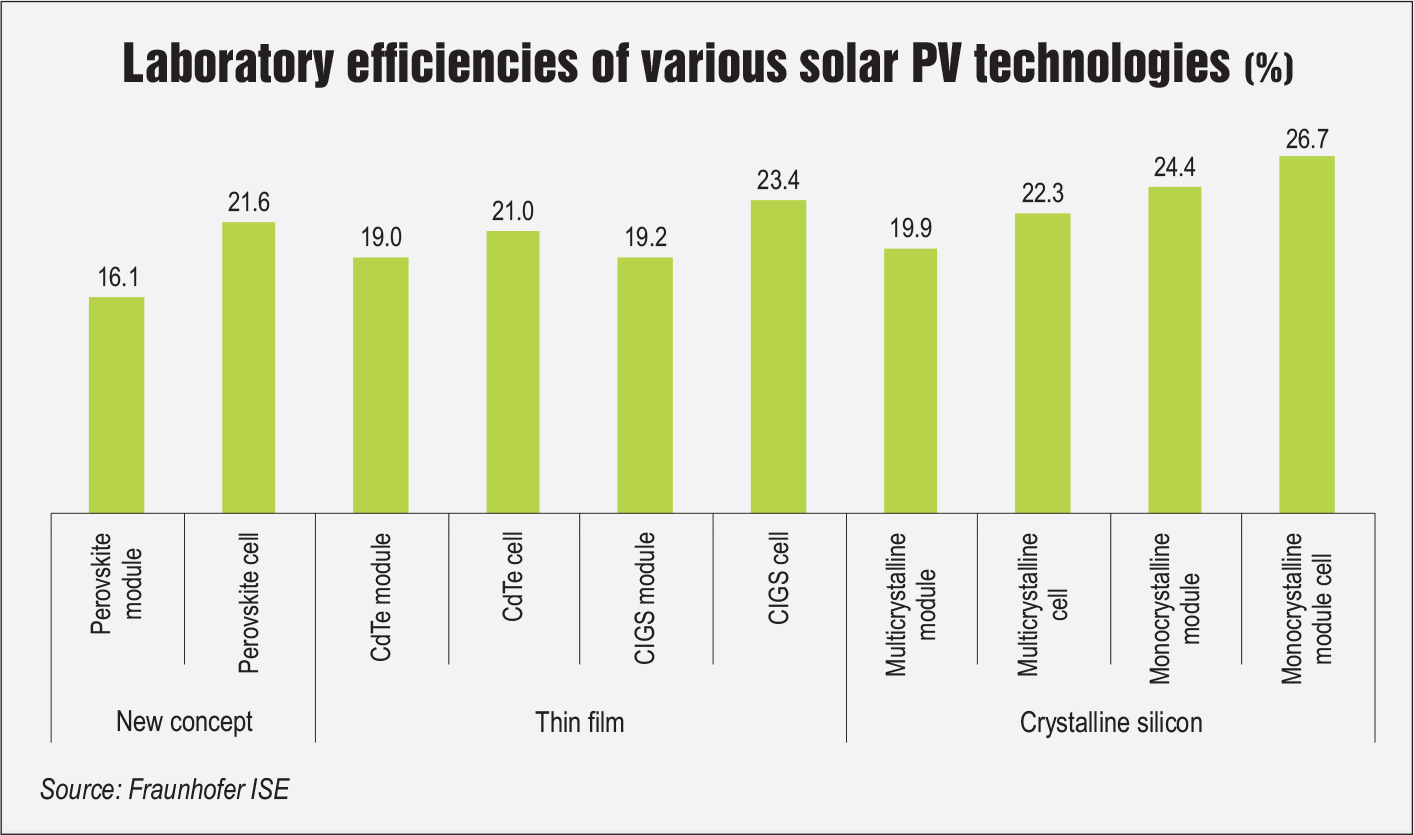 Despite technology upgradations, there is still a looming concern over defects in modules. Cracks, scaling and other defects that severely impact the overall project performance have been found in many project sites. These defects can occur in any module component such as frames, solar cells, glass, encapsulants, backsheets and junction boxes. Defects in solar cells include corrosion, hotspots, snail trails, broken interconnection, cracks and burn marks. Meanwhile, defects found in backsheets include cracking, delamination, yellowing and cracking of the inner layer. Some defects are related to the discoloration, browning and delamination of the encapsulant, while the remaining issues are found in junction boxes, glass material and anti-reflective coating. Apart from performance issues, such defects can cause fires and other critical hazards, compromising the safety of power plants and operations and maintenance (O&M) personnel.

Often, it is not the module itself that is defective, but poor installation and O&M practices that cause such defects. Successive studies have pointed out faults in not only the actual modules but also in their installation and handling. Moreover, proper O&M is not carried out, with such cracks and other faults left undetected. Frequent module cleaning is important with due attention to factors such as materials used for wipers, type of water, cleaning methodology, water pressure and cleaning intervals that impact module performance over time.

Also, many times developers are unable to replace these defective modules owing to lax warranty requirements and frequent legal gaps. Further, it has been found that specific quality certificates beyond the basic International Electrotechnical Commission (IEC) certification is requested from the module manufacturers in many projects. This problem is partly due to a dearth of proper testing infrastructure in India. Thus, more testing centres need to be set up to undertake quality and performance checks for a higher capacity. Besides, for this fast evolving solar segment, creating a comprehensive, watertight system of standards will provide the much-needed framework to help stakeholders ensure a certain level of plant performance. It is thus imperative that the government develops a rigorous standards ecosystem, encapsulating the entire solar value chain.

With solar power set to become a major contributor to the energy mix of most countries, PV technologies will be constantly upgraded for greater cost competitiveness. However, in this race for the cheapest product, product reliability and quality cannot be ignored. Thus, not all new technologies, though highly efficient, will become a commercial hit. Some may even remain stuck at the pilot level. Meanwhile, many technologies may be ideal for a particular application or location but not commercially viable for another. For instance, bifacial will give significant energy gains when mounted on snow-covered ground, but no improvement in energy production on a dark surface. Moreover, the performance of a module will also depend on the design and engineering of the entire project as well as its O&M. Even the best quality module, if not mounted correctly at the right angle or not cleaned properly, will not function to its full potential and may lead to costly defects later. Thus, overall, while product reliability is definitely important, it alone is not sufficient to ensure the long-term quality and cost competitiveness of the project.