India’s status as a preferred renewable energy destination has been cemented over the years since the government announced the 175 GW renewable energy target to be achieved by 2020. The number of international companies and organisations looking to install projects and pump foreign investment directly into the booming market has increased with time. Several government policies have helped improve the overall economics of the segment. For instance, the introduction of competitive bidding in the solar power segment has enabled floor-low tariffs, thereby improving its offtake by discoms amid a steep fall in module costs, which has kept revenue margins steady.

There are multiple challenges that have enhanced the risk profile of the non-conventional energy segment in India, primary among which is financing. Foreign direct investment (FDI) into the segment has helped mitigate the risks associated with financing to a large extent. Since the segment began opening up in the early 2000s in India, FDI has played a significant role in its overall development. Considering this, the government has allowed 100 per cent FDI in the renewable energy segment under the automatic route. 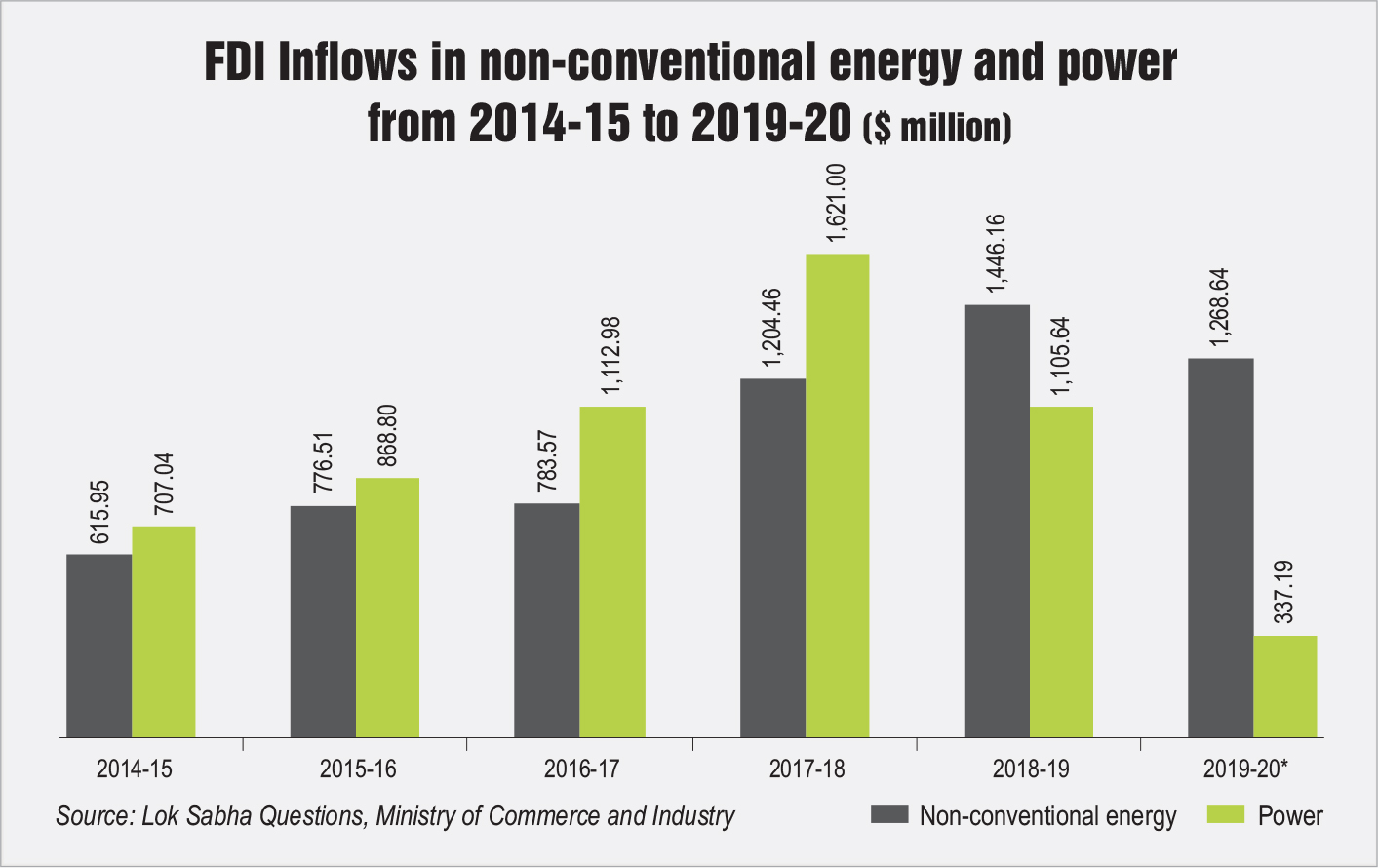 According to the Ministry of Commerce and Industry, the first FDI of about $1.7 million into the non-conventional energy or renewable energy segment was seen in 2002-03. It has since grown by leaps and bounds and as of December 2019, the total FDI into the sector stands at $9,100 million. The growth in FDI is commensurate with the growth seen in the renewable energy segment over the past 18 years, from a few megawatts to over 87 GW. The FDI into the segment has grown at a compound annual growth rate (CAGR) of 52.4 per cent between the period 2002-03 and 2018-19. To put things into perspective, FDI into the traditional power sector stands at $14,962 million, having grown at a CAGR of only 15 per cent during the past 20 years.

The five years 2014-15 to 2018-19 saw FDI inflows grow at a CAGR of 23.8 per cent. In comparison, the five-year growth in power sector FDI was 11.8 per cent. Two-thirds of the total FDI into the renewable energy segment has taken place only in the past six years. The segment came of age during this period, which is reflected in the amount of foreign investment. This is also the period of critical policy decisions that have given the renewable energy segment its current shape. From slashing of accelerated depreciation to removal of generation-based incentives, the government took risky decisions from the investor perspective. These were, however, balanced by allowing market forces to determine the tariffs for projects through competitive bidding. The tariffs thus discovered, as low as Rs 2.44 per kWh, rendered solar power at par with the grid and reduced offtaker risk considerably, thereby improving investor confidence.

As a result, the number of projects and capacity installed increased, as did FDI inflows. During the period between April 2014 and December 2019, the renewable energy segment received $6,095 million or 66 per cent of the total FDI inflows into the segment during the past 18 years. More than half of these investments were received only in the past three years. In 2017-18, a record FDI of $1,204 million was made in the renewable energy segment, the highest since 2002-03. This record was breached the very next year with $1,446 million FDI received in 2018-19, the highest FDI into the segment so far. In 2019-20, as of December 2019, $1,268 million has been invested already. Even the power sector saw high investments with a total of $5,572.81 million FDI during the six-year period 2014-15 to 2019-20. However, this is only a third of the total FDI in the sector over two decades.

Going forward, the achievement of renewable energy targets will only be possible if the pace of tendering activity and installations increases significantly. According to experts, $80 billion-$100 billion will be required over the next three years to achieve the targeted capacity of 175 GW by 2022. The large amount of investment required opens up the market for greater FDI than the segment has received in the past 20 years. The renewable energy segment is a priority industry with 100 per cent FDI allowed through the automatic route. This route suggests that the incoming investment does not require prior government approval. This step is crucial in building investor interest and in enhancing the ease of doing business for the renewable energy segment.

The recent outbreak of the Covid-19 pandemic may have put a spanner in the works for FDI inflows into the renewable energy segment. With cash coffers drying up worldwide and projects delayed in the country, FDI inflows are likely to slow down in 2020-21 and perhaps in 2021-22 as well. This is also the period when high FDI is required to achieve the targets.

On the bright side, the pandemic and its resulting global economic turmoil may be seen as an opportunity for investors as the country moves towards becoming atmanirbhar or self-reliant in all aspects, including renewable energy. Hence, solar module manufacturing, an element severely lagging behind, is certainly expected to be one of the critical activities that would need large investment under this programme. The next few months will be critical for foreign investors to wait and watch as to how the situation pans out and what economic impact the pandemic leaves on the renewable energy segment in India.