The state’s renewable energy development initiatives have been led by Gujarat UrjaVikas Nigam Limited. Meanwhile, Gujarat’s discoms have chalked out their renewable energy procurement plans to ensure compliance with the 15.65 per cent renewable purchase obligation (RPO) target set by the Gujarat Electricity Regulatory Commission (GERC) for 2019-20. Of this target, 6.75 per cent is for solar, 8.15 per cent for wind and the remaining is for other renewable sources. There are four main distribution companies in Gujarat – Dakshin Gujarat Vij Company Limited (DGVCL), Madhya Gujarat Vij Company Limited (MGVCL), Paschim Gujarat Vij Company Limited (PGVCL) and Uttar Gujarat Vij Company Limited (UGVCL). All of these distribution companies have been performing well and received an integrated rating of “A+” by ICRA Limited for the 2018 financial year. Under the state budget for 2020-21, the state government announced a sum of Rs 2.276 billion for the new and renewable energy sector. Of this, Rs 956.1 million was allocated for agricultural applications and Rs 10 million for urban, industrial and commercial applications. The state government has also announced a Rs 10 million subsidy for the development of group-captive rooftop and ground-mounted solar PV projects for residential consumers. 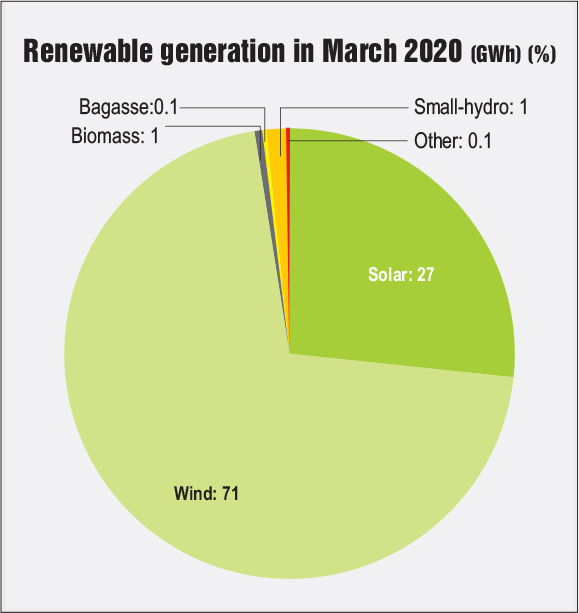 Gujarat ranks sixth among Indian states in terms of installed solar power capacity. Currently, the state has 2,948 MW of installed solar power capacity, 82 per cent of which comes from ground-mounted solar projects. Three large solar parks have been sanctioned for the state – the 700 MW Radhnesada solar park, the 500 MW Harsad solar park and the Dholera solar park, which is divided into two phases of 1,000 MW and 4,000 MW. The Dholera solar park is expected to cover an area of more than 27,000 acres to develop 5 GW of solar projects. Of the total 1,000 MW capacity under Phase 1, the auction process for 300 MW has already been completed. In March 2020, the remaining 700 MW of capacity was retendered. The ceiling tariff for the tender has been set at Rs 2.92 per kWh. The Ministry of New and Renewable Energy (MNRE) recently communicated that the upper ceiling tariffs would no longer be prescribed in future bids for solar and wind projects. However, since this capacity has been retendered out of the 1 GW capacity floated last year, it still comes with a ceiling tariff. In light of the coronavirus crisis, GUVNL has extended the bid submission deadline for this tender.

In March 2020, GUVNL also announced the list of successful bidders in the auction for 500 MW of grid-connected solar projects (Phase VIII). The successful bidders were Vena Energy Clean Power Private Limited, which won a capacity of 40 MW at the quoted price of Rs 2.61 per kWh, and Juniper Energy Green Power Limited, which won a capacity of 190 MW at Rs 2.63 per kWh. Tata Power placed its bid for 200 MW, but won a capacity of 120 MW under the bucket filling method at a tariff of Rs 2.64 per kWh. The tenders for these projects were issued in early February 2020 with a tariff ceiling of Rs 2.65.

The popularity of solar power is growing even in the small-scale segment. In September 2019, the Gujarat government relaxed the state’s solar policy to allow MSMEs to install solar projects that are more than 100 per cent of their sanctioned load or contract demand. Before this announcement, the Gujarat solar policy, which was introduced in 2015, allowed commercial and industrial clients to install only 50 per cent of their sanctioned load. Further, in March 2019, Gujarat introduced a policy for distributed solar projects. The policy aims to facilitate the development of small-scale solar PV projects with sizes ranging between 0.5 MW and 4 MW. These solar PV projects will be set up in scattered pockets of barren and uncultivable land. The policy will provide visibility to small developers in terms of available tariff for the sale of power and help promote small-scale entrepreneurs. Recently, Gujarat authorities approved proposals to install solar systems in the state at an approximate cost of Rs 136.1 million. The solar energy generated from these systems will be utilised for 15 water treatment and sewage projects spread across 11 municipalities in the state. These are Bardoli, Umargam, Botad, Songadh, Vijalpore, Ankleshwar, Jambusar, Navsari, Vyra, Unjha and Surendranagar. 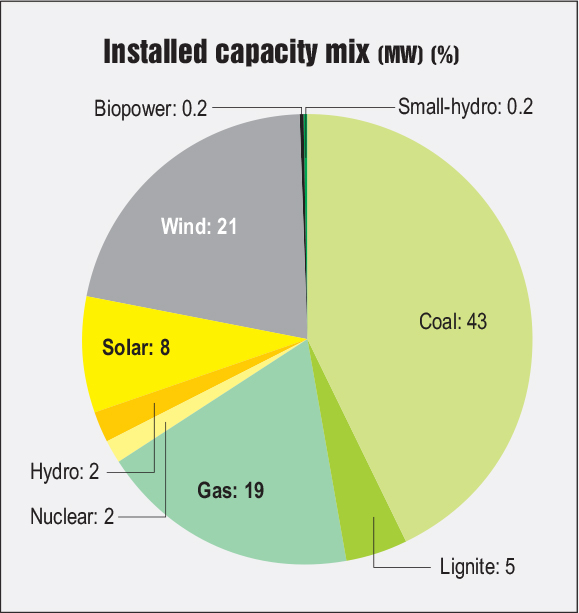 Wind beyond the shore

The state’s 1,600 km shoreline provides a huge wind energy potential. At 7,491 MW, Gujarat has the second highest installed wind power capacity of wind power, second only to Tamil Nadu. In March 2019, GUVNL issued a tender for the purchase of power through the competitive bidding process from 1,000 MW of grid-connected wind power projects to be developed in the state. The project received bids totalling 931.40 MW, of which GUVNL awarded 745 MW, or 80 per cent of the capacity.

Beyond onshore wind, Gujarat also holds a significant potential for offshore wind projects. Based on the studies undertaken by the National Institute of Wind Energy (NIWE), it is estimated that approximately 36 GW of offshore wind power potential exists off the coast of Gujarat. To obtain more accurate data on wind quality measurements, a light detection and ranging (LiDAR) system has already been installed near the Gujarat coast, which has been gathering data about the quality of offshore wind since November 2017.

To support the country’s offshore wind endeavour, the first offshore wind project of India funded by the EU has been set up. The government is working on the country’s first 1 GW offshore wind project in the Gulf of Khambhat in Gujarat. Wind measurement data for two years has been collected and validated with a ground-mounted wind monitoring station at Jafrabad, Gujarat. The NIWE has published a report based on the data collected from LiDAR for two years. Further, the required geophysical study for an area of about 365 square km has been completed, along with geotechnical studies for five bore holes in the Gulf of Khambhat. An environment impact assessment study has also been conducted through the National Institute of Oceanography for the proposed 1 GW offshore wind energy project off the Gujarat coast. Data collected over the past two years from a LiDAR deployed 23 km from the Jafrabad coast in 2017 has revealed an annual average wind speed of 7.52 metres per second at a height of 104 metres. Following the geophysical and geotechnical surveys, a draft report is currently under examination.

During 2019, the MNRE invited expressions of interest for the 1 GW offshore project in India, which received a good response from domestic as well as global players. The government is planning to approve viability gap funding worth $909 million to support the project, which is now awaiting final approval. The government funding is expected to compensate the project developer for high capital costs, which may not get covered in the power purchase tariff of Rs 3.50 per kWh. All necessary Stage 1 clearances for the project have been obtained by NIWE as per the National Offshore Wind Energy Policy. A developer will eventually be selected through a competitive bidding procedure and will then have to obtain Stage 2 clearances for the project. The MNRE is in the process of drafting offshore wind energy lease rules in order to regulate the allocation of offshore wind blocks to developers within the exclusive economic zone, a sea zone over which a country has special rights regarding the exploration and use of marine resources, including energy production from water and wind. 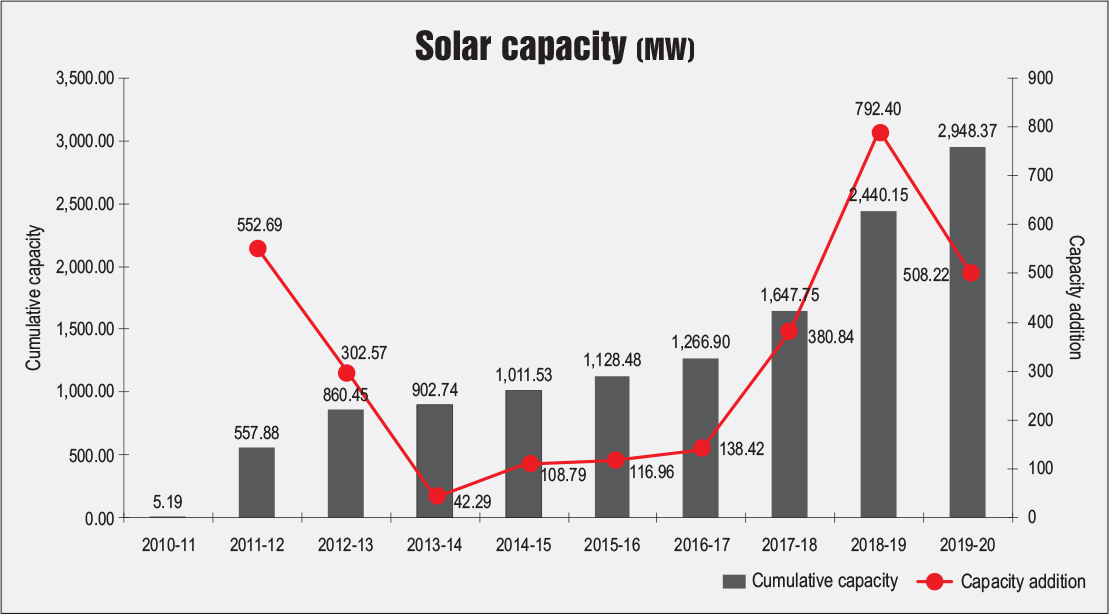 Can Gujarat lead the renewables race in India?

Gujarat is considered one of the best states for solar and wind power capacity expansion, due to its abundant wind and solar resources and the high rating of its discoms. The state government has set a very ambitious renewable capacity target of 30 GW by 2022, but given the current project pipeline and slowdown owing to the Covid-19 outbreak, it is unlikely to be achieved. The state’s current capacity stands at a little over 10 GW, which is almost one third of the target. Project development and new tender releases have been hampered by the coronavirus pandemic, and Gujarat is among the most affected states in India. Solar and wind developers’ cash flows will be affected and corporate bank loans for new project development will also be difficult to maintain. The major solar parks and wind projects, which are currently at various stages of development, are also likely to face delays due to disruption in the supply chain. As a result, the capacity that was supposed to be commissioned in 2020 is now likely to come online by 2021. In the long term, however, Gujarat will be among the states that will lead the country’s energy transformation programme.