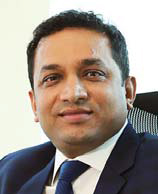 Goldi Solar has made remarkable progress over the past few years, expanding its module manufacturing capacity from a humble 10 MW in 2011 to 500 MW. Set to expand its capacity to 1 GW in 2020, the Surat-based manufacturer is also exporting its products to over 12 countries. In an interview with Renewable Watch, Ishver Dholakiya, founder and managing director, Goldi Solar, talks about the state of the solar power segment, the company’s current scale of operations, future targets and vision. Excerpts….

What has been the solar power segment’s growth trajectory over the past year? What are the biggest concerns faced by the segment? How can these be addressed?

Pursuing its target of 100 GW, the Indian solar power sector continues to be one of the world’s largest, fastest growing and most competitive markets on a price parity basis. Despite efforts by the government to promote renewables in India, the solar industry faces certain barriers related to frequent changes in tax and duty structures, GST and safeguard duties, long-pending reimbursements of GST and safeguard duties, as well as delays in payment by utilities and the lack of a robust payment security mechanism. The cancellations of legally valid contracts and power purchase agreements as well as payment delays have further dampened investor sentiment. Transmission capacity constraints of interstate transmission systems located in high global horizontal irradiation areas and land-related challenges are other bottlenecks. The government needs to systematically remove these constraints. That being said, the renewable energy sector has tremendous potential to grow due to falling tariffs and favourable cost economics. Large investments are also expected in the manufacturing of solar cells and panels, with a focus on new technologies such as passivated emitter and rear cells (PERC).

What is your opinion on safeguard duties?

We have full faith in the government’s Make in India initiative, but I believe that the safeguard duty on solar cells will adversely impact tariffs and hence, capacity addition. In India, we do not have an ecosystem for silicon production and cell manufacturing. Also, there are not many cell manufacturers in the country that can support the demands of local module manufacturers. With the majority of the solar cells being imported, the additional cost of safeguard duties will be passed on to the consumer. So, I think such high duties are neither favourable nor  advisable. Further, there needs to be clarity on whether these duties will be extended post the expiry period.

What is Goldi Solar’s current scale of operations? What is the future project pipeline?

Goldi Solar has been listed as a Tier 1 company by Bloomberg NEF. We have been outpacing our goals and annual module manufacturing targets. Goldi started with a small footprint – a 10 MW module production line – in 2011. It achieved a CAGR of 80 per cent in the first five years and reached the current production capacity of 500 MW. The company plans to increase this to 1 GW in the near future. The company is exploring high-efficiency PERC manufacturing in India. It is also planning to set up a solar cell production line at its new unit coming up in Gujarat. Currently, the company manufactures PV modules using mono- and poly-crystalline solar cells up to 400 Wp. It is also one of the leading solar design and installation firms undertaking engineering, procurement and construction (EPC) projects. Goldi’s EPC arm has made record progress in the rooftop solar segment as well as in commercial projects in the past four years by adding over 2,500 customers to its portfolio. Many small, medium and large-scale projects have used Goldi modules, which have good product recall value amongst customers. Goldi customers include many PSUs, leading EPC companies and module manufacturers.

Do you have any overseas expansion plans?

Goldi already has a presence across a large number of markets abroad. Considering the potential for utility-scale projects in India, we are gearing up to expand further. We are exploring opportunities in the Middle East, Africa, Southeast Asia and Latin America. We hope to get good orders from these countries in the near future.

What are the most promising opportunities you foresee in the solar space? Is the rooftop segment likely to achieve its target?

Both the utility and the rooftop solar segments are poised to grow at a fast pace. In order to achieve the 40 GW target set for the rooftop solar segment, India will need to expand its capacity by more than 15 times over the next three years (2020-22). It currently accounts for only around 12 per cent of the total solar installations in the country, with 2.4 GW of installed capacity. This massive gap poses a serious question about the possibility of meeting the target. However, both the central and  state governments are providing support by undertaking solar initiatives such as the Sustainable SRISTI scheme. Net metering implementation, however, has to be improved in order to achieve a higher rate of growth.