The deployment of off-grid solar applications has been a vital part of the National Solar Mission, with a target to develop systems of 2,000 MW cumulative capacity. Under Phase I of the mission, 253 MW was sanctioned against a target of 200 MW to be developed between 2010 and 2013. For Phase II, from 2013 to 2017, the target was increased to 500 MW and 713 MW was sanctioned for deployment. Phase III, also known as the Off-grid and Decentralised Solar PV Applications Programme, is currently under way, with a target of 118 MW. This target, however, does not include the installation of solar pumps, which are now under the PradhanMantriKisanUrjaSurakshaevamUtthanMahabhiyan scheme, and solar home lighting systems that are covered under the power ministry’s Saubhagya scheme.

The total target for the off-grid segment for the year 2019-20 stood at 410 MW, of which 67.2 MW or 16.4 per cent has been achieved. As of February 2020, the WtE segment has achieved the installation of 12.41 MW against a target of 10 MW. Meanwhile, the SPV systems target for the year stood at 400 MW, against which only 54.86 MW or 13.7 per cent has been achieved so far. In the SPV systems segment, 702,951 solar street lights have been deployed as of February 2020. HLS installation stood at 1.72 million, while around 7.5 million solar lights have been distributed to off-grid areas in the country. The total lighting systems deployment, therefore, stood at around 9.9 million. Also, about 214.3 MW of power plants have been installed, along with 254,178 solar pumps. 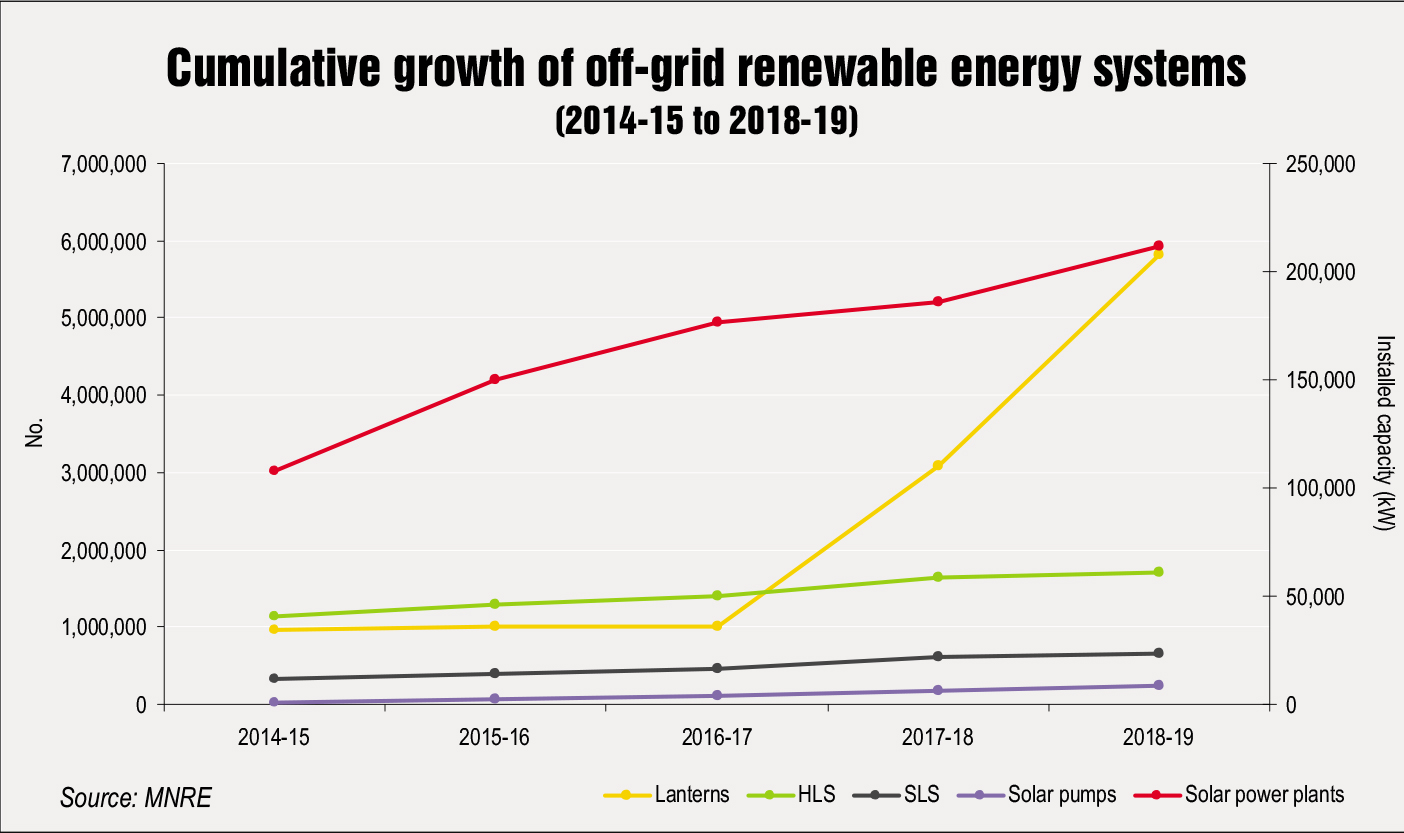 In the WtE segment, only 17 states have installed any off-grid capacity till now. Uttar Pradesh leads the pack with 50.2 MW of installed WtE capacity, followed by Maharashtra with just over 31 MW and Andhra Pradesh with 25.2 MW. Other notable states are Gujarat (19.2 MW), Tamil Nadu (16.5 MW) and Karnataka (13.6 MW). Uttar Pradesh also leads SLS deployment, with nearly 40 per cent, or 275,000 systems, of all installations in the state. Himachal Pradesh stands a distant second with 78,000 installations, while Punjab is the third largest state in terms of SLS deployment with 42,758 systems.

The solar HLS segment is led by Tamil Nadu with almost 300,000 installations. It is followed by Uttar Pradesh with about 236,000 and Rajasthan with 188,000 HLS deployments. Meanwhile, Uttar Pradesh and Bihar lead the deployment of solar lanterns in the country with 2.3 million and 1.7 million lanterns respectively. Chhattisgarh leads the states with 31.3 MW of off-grid solar power plant capacity, followed by Rajasthan at 30.4 MW and Kerala with 15.8 MW of installed capacity. Meanwhile, Rajasthan and Uttar Pradesh have the largest number of solar pumps with 48,175 and 28,650 pumps deployed as of February 2020. 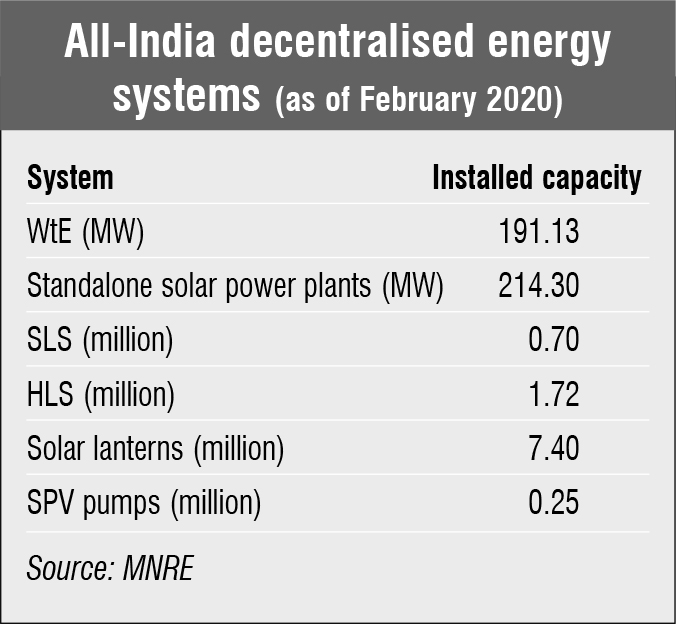 The off-grid solar power segment addresses the energy needs of the population at the base of the social pyramid. Since these people are usually located in far-flung areas and are highly dependent on season-based agricultural incomes, traditional financing mechanisms are not ideally suited for such projects. Therefore, most of these projects are government funded. However, there may be a good opportunity for the private sector in terms of financing, execution, delivery, manufacturing and defining in efficient supply chain for these projects. For the off-grid solar segment, impact investment may hold the key to better outreach and a rapid expansion of such projects.

Considering the number of deployments over the past three to four years, it can be seen that the execution strategies are improving. It is time for the government to include smarter business models to provide more efficient off-grid power. This will require a greater focus by policymakers on the off-grid segment, which is quite often overshadowed by the grid-connected renewable energy segment. With the help of clearly defined policies, the uptake of off-grid power systems is likely to improve significantly.

The socio-economic benefits of off-grid power for the country outweigh the challenges. Therefore, the government should work towards making the segment risk-free and more attractive to investors. Moreover, appropriate policies for scaling up manufacturing operations of these energy systems are needed to improve the supply chain and reduce costs. Further, innovative methods of financing and business models for rural consumers are needed to enable widespread reach to even the most underserved areas and sections of the  population.