According to the latest data released by China Custom, PV inverter export shipments reached 2.4 GW in February 2020 with a total export value of $85 million. The shipments dropped 41% month-on-month (MoM), while showing an increase of 64% compared with February 2019.

In terms of manufactures’ export value, Sungrow took the first place with export value exceeding $12 million (excluding the Indian factory segment), followed by Huawei and Growatt with the export value of $11 million and $7 million respectively. 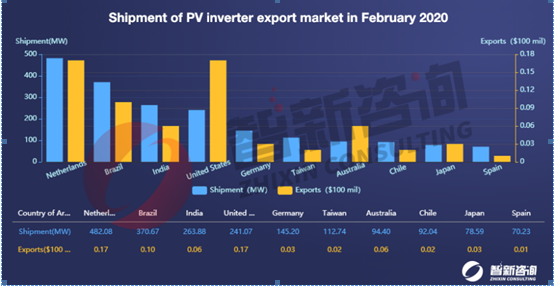 (Remark: China’s manufacturers’ shipments and export data only refer to what is produced in Chinese factories and exported abroad. Shipments of factories outside China and bonded areas are excluded.)
In terms of manufacturers’ shipments, Sungrow’s export shipments from China factories were 463.71 MW, while its India factory shipments were 480 MW, enabling the overseas shipments totaling 943.71 MW. Shipments of Huawei were 548.23 MW, ranking second, and Growatt ranked third with 325 MW of overseas shipments.

As we all know, some Chinese manufacturers were temporarily unable to resume 100% work due to the impact of the Covid-19 pandemic, resulting in a decrease in shipments in February compared with January, and an increasing risk of corporate contract order defaults and capital turnover. Another key reason for the decline in exports is the slow down on demand of the global market and the decreasing efficiency in logistics.

It is worth noting that the Q1 is usually an off season for demand and coincides with the Chinese Spring Festival holiday. The pandemic brought huge impact to the global PV industry. In terms of export data over the years, the growth rate in Q1 was low. Many solar factories in China are starting to resume production, suggesting that concerns about supplies of PV components could soon begin to ease. Policies to support the export of mechanical and electrical products are gradually being put in place, and the long-term prospect of the PV industry is still worth looking forward to.

Sungrow’s preliminary fiscal report shows the company’s revenue for 2019 was about 13.5 billion CNY ($1.934 billion), representing a 30.5% YoY increase; and the net profit was 891 million CNY ($127.65 million), a YoY increase of 10.09%. Sungrow keeps developing the domestic market, likewise it’s dedicated to pouring more efforts to pioneer overseas markets. In 2019, the company experienced a more profitable year for overseas markets than before due to the standout product portfolio and comprehensive local service. 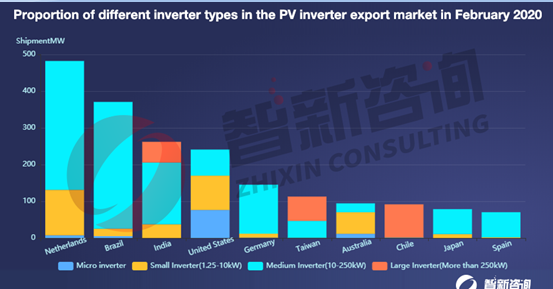 Brazil’s recently announced domestic electrical energy bidding project shows that in the next four years, the total installed capacity of 1,528 energy bidding projects in Brazil will reach 51,438 MW, of which 794 are PV projects with a total installed capacity of 28,667 MW, accounting for 55%. The PV and wind power projects will take up an amount of 96.2% of the expected installations.