The Union Budget 2020 was a much-awaited event for the renewable energy industry, which has been witnessing sluggish growth since 2018. Provisions such as a 48 per cent increase in budgetary allocation to the Ministry of New and Renewable Energy (MNRE) vis-à-vis the revised allocation in the previous fiscal, a Rs 10 billion outlay for furthering the Pradhan Mantri Kisan Urja Suraksha evam Utthaan Mahabhiyan (PM-KUSUM) scheme, and the proposal to set up a large solar capacity alongside railway tracks have been well received by the industry. Renewable Watch presents the reactions of key industry leaders on the budget announcements and their likely implications on the sector…

The overall focus on long-term power sector reforms is very encouraging. It has been noteworthy to know that India stands committed to its international sustainability commitments. The focus on bringing down commercial losses in distribution companies by mandating prepaid meters, coupled with consumers having the choice of suppliers, would surely resolve the long-term viability issues of the power sector and lead to the creation of a vibrant electricity market. The use of solar in railways and farming, and the use of farmlands for solar plants would open up new entrepreneurial opportunities and help in the faster adoption of solar energy across the country. We are also feeling encouraged by the support extended to non-banking financial companies and infrastructure funds, as these can provide the much-needed liquidity in the market. Also, the slew of tax incentives offered to foreign investors for making investments in priority sectors would give a boost to inward equity flow in the infrastructure sectors.

The budget for fiscal 2021 has affirmed the government’s commitment to clean energy, with a proposal to allocate Rs 220 billion for the renewables sector. The plan to provide stand-alone solar powered pumps to 2 million farmers would allow them to generate solar power. Moreover, setting up large solar power capacity along railway tracks  would encourage the use of clean and renewable energy. Further, the decision to extend the concessional corporate tax rate of 15 per cent to new power generating companies would give a major boost to the sector. Additionally, the government is focusing on ensuring “smart metering” by replacing conventional energy meters with prepaid smart meters in the states and union territories over the next three years. This would prove to be a positive step in addressing the financial stress of discoms, if there is 100 per cent compliance. This move would also give users the right to choose their distributor and decide how much they want to pay. The proposal to create five new smart cities in collaboration with the states in PPP mode and attract Rs 100 trillion of investments under the National Infrastructure Pipeline (NIP) is critical for boosting overall economic growth. If rolled out well on the back of adequate funding, the NIP would be a potential game changer for the economy and have the ability to create thousands of jobs and revitalise ancillary industries.

The Rs 200 billion corpus announced in the union budget for the renewable energy sector to tackle climate change and pollution reflects India’s commitment and the urgency for transitioning to clean energy sources. We are awaiting further clarity on new schemes around smart meters and grid infrastructure. The government’s intention to solarise Indian Railways and expand the KUSUM scheme to include 2 million farmers would give a big boost to solar power deployment in rural areas where the impact would be the highest, as it would address the issues of energy access, energy affordability and climate change in one stroke. Another key announcement made by the finance minister was the abolition of the dividend distribution tax. This is a good move, as it would make investments more attractive.

The union budget provisions are in line with the government’s vision and support for the renewable energy sector. The announcement pertaining to the KUSUM scheme is a positive step and would further help farmers in improving their livelihood. The government’s decision to incentivise farmers to adopt solar and allow those with barren lands to set up solar power units would help them earn a living out of it. Also, the proposal to set up large solar power capacity alongside railway tracks on the land owned by the Indian Railways is a positive step towards the growth of the renewable energy sector.

Measures to boost decentralised solar power generation, including through solar pumps, is likely to lower subsidy dependence for discoms and also create demand for solar equipment and energy efficient pumps. The proposal to enhance the coverage of prepaid smart meters over the next three years is expected to aid discoms in curtailing distribution losses; benefit consumers by providing flexibility to choose suppliers and rates; and boost demand for smart meters thereby benefitting the manufacturers. Shutting down old thermal power plants would shift generation to newer thermal projects and thus provide a moderate boost to their plant load factors. Abolition of the dividend distribution tax, and lower tax rates would encourage fresh investments in the power sector, especially the renewable energy and transmission segments.

The renewable energy budget allocation, which hovered around Rs 55 billion, has seen almost a fourfold jump to Rs 220 billion; this is praiseworthy. However, the majority of it might go towards supporting the ambitious proposal for 2 million stand-alone and 1.5 million grid-connected solar PV agricultural pumps. A major announcement regarding the milk processing capacity being doubled from 53 tonnes to 108 tonnes by 2025 would increase the demand for heat energy, provide an opportunity to explore solar thermal energy or any other form of sustainable heating, and open the doors for entrepreneurs to foray in developing sustainable heating technologies.

Decarbonisation in one of the largest public sector utilities, Indian Railways would be a big boon for the renewable energy sector, especially the rooftop solar segment, and would also be in line with India’s commitment towards climate change. This complements the decade-long persistence of SunSource to develop solar projects in the country. A $3.08 billion stimulus for promoting renewables is unprecedented and would definitely present strong business opportunities for key independent power producers in the solar segment such as SunSource. Reduced tax liabilities in the MSME sector combined with the ongoing commitment to solar would free up capital for capex- and opex-based solar projects.

We welcome this year’s budget, which focuses on critical issues that propel the growth of aspirational India. Addressing the challenges of severe water stress in the nation as one of its topmost agendas, this budget gets to the bottom of things by proposing comprehensive measures for 100 water-stressed areas. Given that the budget aims to empower farmers by increasing their dependence on off-grid solutions with solarised grid-connected pumps through the PM Kusum scheme, I think that this would act as a catalyst for sustainable irrigation solutions across the country. The proposed allocation in the budget for the agricultural sector is likely to positively impact rural development. We are very much excited to see the budget allocation for the Jal Jeevan Mission. Also, the foreseen investment in the renewable energy sector would enable the government to achieve its National Action Plan on Climate Change. 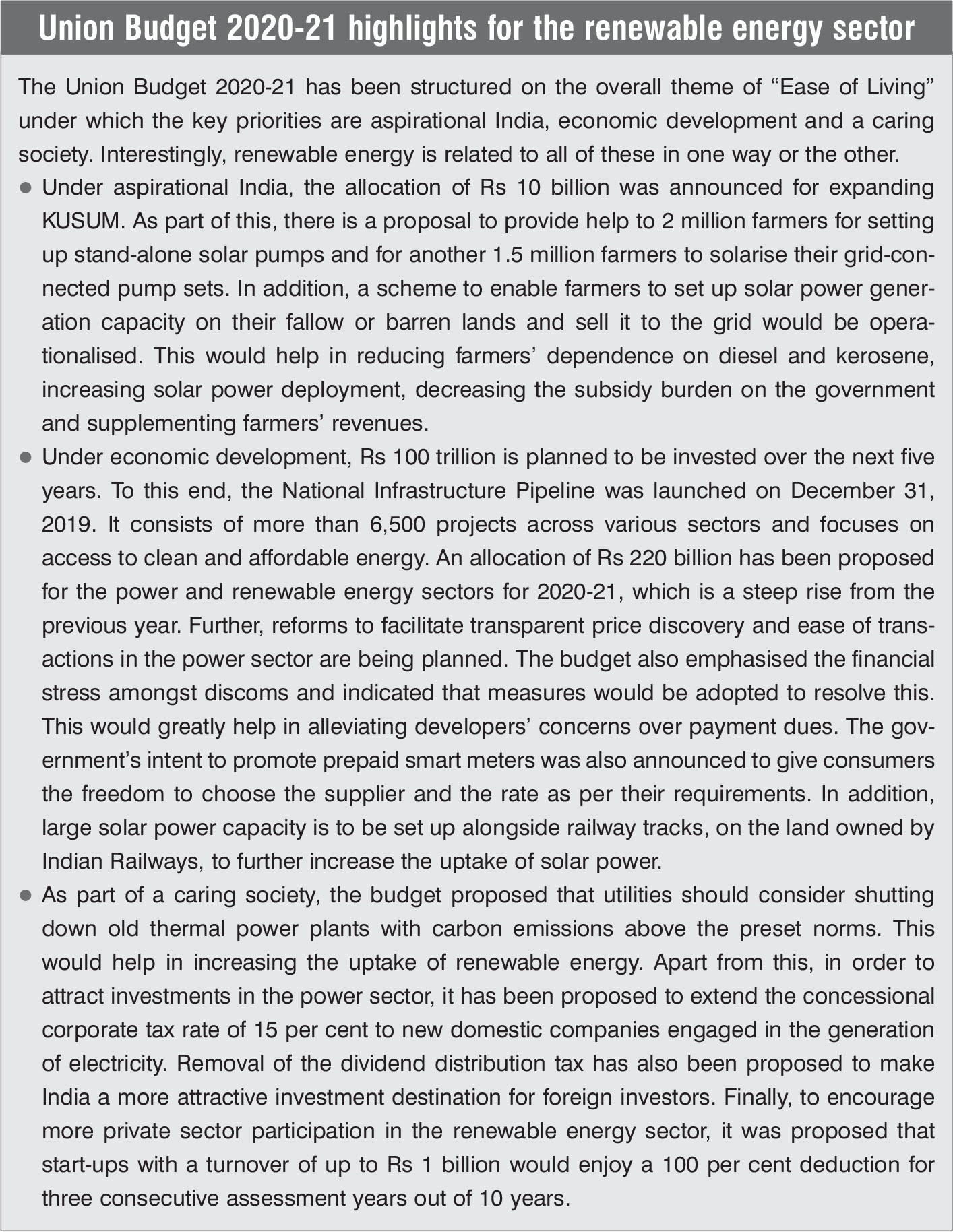 The power sector is central to India’s transition to a low emission trajectory and is an integral part of the country’s economic development. The government’s proposed outlay of Rs 220 billion for the power and renewable energy sectors in the Union Budget 2020-21, compared to the Rs 158,740 million allocated in last year’s budget, is welcoming and would definitely help achieve the Green India Mission as well as create jobs. This move showcases the government’s commitment to establish India as a global leader in the clean energy space, and would lead to employment creation and a reduction in India’s carbon emissions.

The time-bound proposal to shift to prepaid smart meters can truly help utilities in improving cash collection as well as consumers in getting a competitive power supply. This is a positive step for generators too, who currently suffer delays of six to eight months and are sitting on surplus capacity that could be sold if they had access to consumers. Sovereign wealth funds with a presence in the domestic renewables, hydro, transmission and distribution sectors would see a 100 per cent tax exemption on interest, dividend and capital gains. This, in addition to the corporate tax cut for power generators, is likely to attract new investments, encourage early closure of inefficient plants and reduce marginal cost of generation. The government’s continued focus on decentralised renewable energy, closure of inefficient plants, and a reinstatement of its commitment to climate change is encouraging. This would translate into real action, especially given the budget proposals to attract external funding.

The Union Budget 2020-21 is a balanced and pragmatic statement of intent. The finance minister in her speech has attempted to address the trust deficit across a host of sectors. She has assured stock market investors by abolishing the dividend distribution tax, addressing concerns of start-ups with respect to employee stock ownership plans and, in the renewable energy sector, by strengthening the Contract Act and lowering the corporate tax rate for new energy companies. While there was pressure to move away from fiscal responsibility, the government has chosen to walk the middle path, allowing for an acceptable increase in fiscal deficit while putting some extra money in the hands of taxpayers.

The IEX welcomes the government’s move to expand the natural gas pipeline grid and introduce reforms for the transparent price discovery of natural gas. The focus on gas and renewable energy would enable the shift towards cleaner energy sources and also help the government deliver on its commitments under the Paris Climate Agreement. At the IEX, our priorities are aligned with those of the government. Some of the initiatives that we plan to roll out are setting up the country’s first gas exchange, establishing a green energy market, creating a real-time electricity market and ensuring longer-duration contracts to further the government’s energy agenda outlined in this budget.

The Union Budget 2020-21 is pro-growth, provides the impetus for consumption and the creation of infrastructure, and encourages investments. It provides a boost to domestic consumption through income tax sops for nearly 30 million income tax payers; and improved financial health of 120 million marginal farmers. The special focus on the agricultural sector backed by a 16-point plan is very encouraging. The budget also gives a push to “Make in India” by focusing on manufacturing, and enhancing infrastructure and rural digital connectivity. It is aligned to the objectives of overall economic growth, nation building and job creation.

The industry welcomes the government’s focus on clean energy being the major source of energy security for the country. The finance minister’s assertion to resolve discom issues is welcome; this would help address the financial stress in the system and promote the renewable energy sector. The infusion of Rs 220 billion in the renewable energy sector is a major move towards clean energy growth and would help achieve the prime minister’s vision of 175 GW of green energy by 2022. Also, we hope that with the capital infusion in the banking sector and banks coming out of the prompt corrective action framework, renewable energy projects would see more fund infusion.