Located in northern India, the small union territory (UT) of Chandigarh is also the capital of two states, Punjab and Haryana. The UT does not have any conventional power generation capacity of its own. Thus, in recent months, it has been making efforts to increase solar penetration and become a model solar city by issuing mandates for rooftop solar installation, offering subsidies and launching tenders. A look at the key drivers, bottlenecks and outlook for solar power growth in Chandigarh…

Chandigarh’s energy requirement is largely met through power allocated by central power generating stations such as NTPC Limited, NHPC Limited, Nuclear Power Corporation of India Limited, the Bhakra Beas Management Board, SJVNL and THDC India Limited. As of November 2019, 165.48 MW of capacity (comprising hydro, thermal and nuclear) has been allocated to Chandigarh. The Electricity Wing of the Engineering Department of Chandigarh (EWEDC) is responsible for power procurement, transmission, distribution and retail supply of electricity in Chandigarh. Apart from this, Chandigarh has about 37 MW of installed solar power capacity, which is mostly privately owned. In addition, EWEDC procures short-term power for meeting any shortfall during peak hours, particularly during summer months.

Notably, Chandigarh reported a zero deficit in 2018-19, with a peak power demand of 369 MW. However, many localities in the UT have been facing unscheduled power cuts, particularly in the summer months. For instance, the peak power demand reached 414 MW in July 2019, leading to erratic power supply in many parts. This is most likely due to delays in revamping of distribution infrastructure and insufficient local generation. To address these distribution inefficiencies, EWEDC started revamping the power transmission and distribution system in September 2019. This includes the installation of new distribution transformers across the city, replacement of the old network of electrical wires, completion of new substations, switch from overhead wires to underground cables, and deployment of smart meters.

Even if these distribution issues are addressed, the fact remains that Chandigarh buys almost its entire electricity from outside, through central generating stations or power exchanges. Given the ever-increasing energy demand, the UT needs to either increase its power procurement or install its own generation capacity to ensure quality power supply round the clock. Chandigarh has a good solar power potential with the availability of ample rooftop space and high solar irradiation. According to the Ministry of New and Renewable Energy (MNRE), Chandigarh has an estimated rooftop solar potential of 100 MW. It also has a small waste-to-energy potential, estimated at 6 MW.

In view of its considerable solar power potential, in 2008, the MNRE selected Chandigarh for developing it into a “model solar city”, under the Development of Solar Cities programme. It had set a target of 69 MW of rooftop solar capacity across residential and government buildings by 2022. To promote solar uptake, the local administration, in May 2016, mandated the installation of rooftop solar projects at group housing societies and on properties with an area of 500 square yards or more. Further, solar panels were made mandatory for new houses while the existing ones were given two years to install panels. As of September 2019, the Chandigarh Renewal Energy, Science and Technology Promotion Society (CREST) generates 30 MW of solar power and is striving to meet the remaining target by 2022.

Since land availability is an issue for ground-mounted projects, Chandigarh authorities are also exploring the possibility of setting up floating solar projects in the UT’s water bodies, apart from focusing only on rooftop solar. In 2016, a 10 kWp floating solar power plant pilot was commissioned at the Dhanas lake in Chandigarh by Yellow 2 Gen Energy Private Limited. This is one of the first floating solar projects in the country, designed to supply power to fountains at the lake at a project cost of about Rs 1.2 million. The project has dual-axis trackers, capable of generating more power than conventional ground-mounted solar projects. Following the successful commissioning of this project, the UT deliberated over  the scale-up of this land-neutral technology. Although there has not been any progress in this space, the technology might take off in the future once it matures and achieves economies of scale.

The major reason for constant delays in achieving the model solar city target is the uncertainty due to improper subsidy disbursement and frequent changes in rules. According to media sources, residents have been complaining of delays in subsidy disbursement. To this end, it was decided to transfer the subsidy amount directly into the account of the solar power plant company responsible for the installation of these plants. However, a recent ruling in October 2019 has made matters more complicated. As per the new ruling, CREST is not an independent and sole authority for rooftop solar development in Chandigarh, but has to work through the UT’s electricity department. While earlier CREST was solely responsible for receiving and approving applications and releasing subsidies, now it is only an implementation authority and the electricity department is the signatory authority. This has created confusion among residents and installers as now they will have to shuffle between two agencies since subsidies will come to the electricity department and then further be allotted to CREST.

To address the issue of high upfront capital investment faced by residents and reduce the complexities, CREST has decided to launch a renewable energy service company (RESCO) programme for rooftop solar deployment. Under this, the UT administration will select companies to set up rooftop solar projects on private properties. The private properties will pay a set tariff to the RESCO under a 25-year agreement. This tariff will be less than the grid tariff. After 25 years, the solar plant will become an asset of the building owner. Under this model, residents will be free from the hassle of installing and maintaining solar plants and get access to cheaper and quality power. 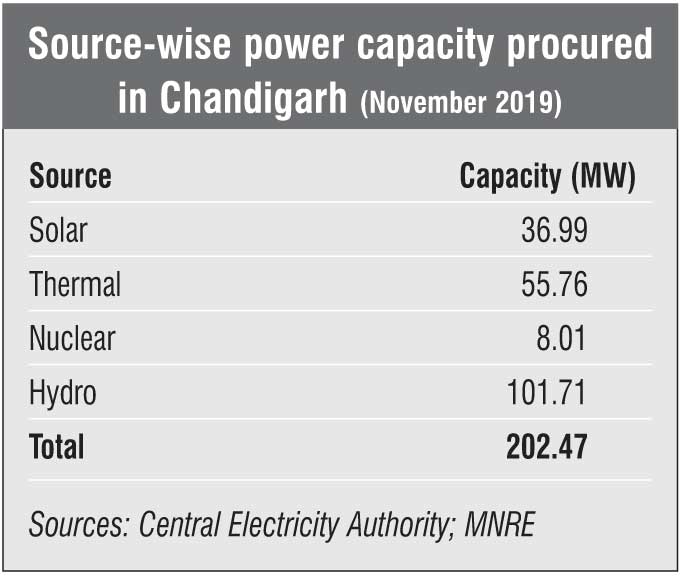 Prior to this, CREST launched a tender in May 2017, for 1 MW of rooftop solar projects to be developed on the Water Works building in Chandigarh. The estimated project cost was Rs 62.85 million and the scope of work was similar to the recent tenders.

In August 2019, the Joint Electricity Regulatory Commission (JERC) finalised the net metering regulations for grid-connected rooftop, ground-mounted and floating solar power projects in Chandigarh along with other states and UTs under the JERC’s jurisdiction. As per these regulations, the group net metering framework applies to all consumers, while the virtual net metering framework applies only to residential consumers, group housing societies, and government and local authorities. Solar projects with a minimum capacity of 5 kW and a maximum capacity of 500 kW at a single location are eligible for grid connectivity, while those with capacity higher than 500 kW can be considered by discoms provided they do not impact the grid systems.

In the case of third-party-owned solar projects, the consumers can lease out their rooftop space or land or waterbody to a developer for setting up the project under net metering. In this arrangement, the consumer pays the developer a mutually agreed tariff for the energy consumed. The discom does not have any role in such agreements and only keeps a record of the commercial arrangement. In this case, all the net metering provisions apply, and the projects are exempted from open access restrictions and associated charges. In addition, all solar projects, irrespective of their power sale arrangements, are exempted from banking charges.

In August 2019, the JERC also issued draft regulations for determining tariffs for solar and other renewable energy generation. For solar with gross metering, the JERC considered a useful life of 25 years, an interest rate of 10.52 per cent, and a discount factor of 9.42 per cent in mainland areas like Chandigarh. Based on these parameters, the JERC proposed a tariff of Rs 5.27 per kWh without accelerated depreciation (AD) and Rs 4.88 per kWh with AD.

To promote electric vehicle (EV) adoption in Chandigarh, the JERC determined a tariff for EV charging in Chandigarh in June 2019. It fixed a tariff of Rs 4 per kWh for the supply of electricity through charging stations along with a fixed monthly charge of Rs 100 on the electricity bill for the stations. The EWEDC recommended a tariff between Rs 5 and Rs 5.60 per kWh. However, the commission chose to set a lower tariff to encourage more consumers to switch to EVs.

Chandigarh’s renewable power journey till date has been relatively uneventful. It was chosen to be developed as a model solar city in 2008, but more than 10 years later, the UT is still to achieve its targets. Although its rooftop solar programme is gaining traction, it is struggling with institutional inefficiencies. Recent initiatives such as direct subsidy transfer and the launch of a RESCO programme along with the new JERC regulations may revive consumer interest in rooftop solar plants. The UT administration has been largely focusing on residential consumers, but commercial and institutional players should also be encouraged to deploy solar plants, especially since they have larger rooftops and deeper pockets.

Tendering activity has been quite slow, with just one small tender launched after a gap of more than two years. Going forward, the UT authorities should actively explore competitive bidding for rooftop solar projects as it may attract low-cost bids and help in achieving the targets sooner. In addition, Chandigarh should assess the feasibility of installing other technologies such as waste-to-energy for waste disposal and more floating solar projects on its waterbodies.

In sum, although the growth has been slow, Chandigarh could be developed into a model solar city provided the right frameworks are in place.