Bamboo, a renewable lignocellulosic material and non-food biomass, has immense potential as a renewable fuel. It can be used as an energy source by converting into solid, liquid and gaseous fuels. India is one of the largest producers of bamboo in the world. In fact, it is second only to China, with a bamboo production of 3.23 million tonnes per annum. More than 66 per cent of the Indian bamboo forests are found in the north-eastern Himalayan region. Bamboo has a higher calorific value (3,850-4,100 kCal per kg) than rice husk or other biomass. Even if 1 per cent of India’s bamboo production is made available, it can produce around 32,500 MW of power annually. Other advantages are that its ash content is very low and it is available throughout the year, particularly in north-eastern India.

Several initiatives have been taken in India for using bamboo and its derivatives to produce gas. The Assam government has been advocating its use to generate gas to replace costly petro-based fuels like liquefied petroleum gas (LPG) and hydrodeoxygenation/furnace oil. Kolkata-based GP Energy (GPE) entered into the field of biomass gasification in 1987, particularly to convert rice husk into combustible gas using fixed grate updraft technology. An expert from the UK-based Power Gas Corporation supplied the basic engineering package. GPE set up three gasifiers with a nominal capacity 600 kg per hour of biomass at Mangaldoi, Assam, to produce gas with a calorific value of 1,250-1,350 kCal per Nm3. This gas was meant to replace the high sulphur diesel used as fuel in the biscuit plant of North East Nutrients Private Limited (NENPL), a franchisee of ITC. The venture proved to be a great success.

It is found that briquettes/pellets often crumble into powder inside the gasifier, thereby blocking the air and gas passage. Thus, they should be used in small proportions, preferably mixed with another fuel. Another important point is that the ash fusion point of any biomass source should be higher than 1,2000 Celsius. If the ash fusion point is lower than this, it becomes very difficult to gasify the biomass source, because the slagging effect of ash blocks the air and gas passage inside the gasifier. Typically, plants 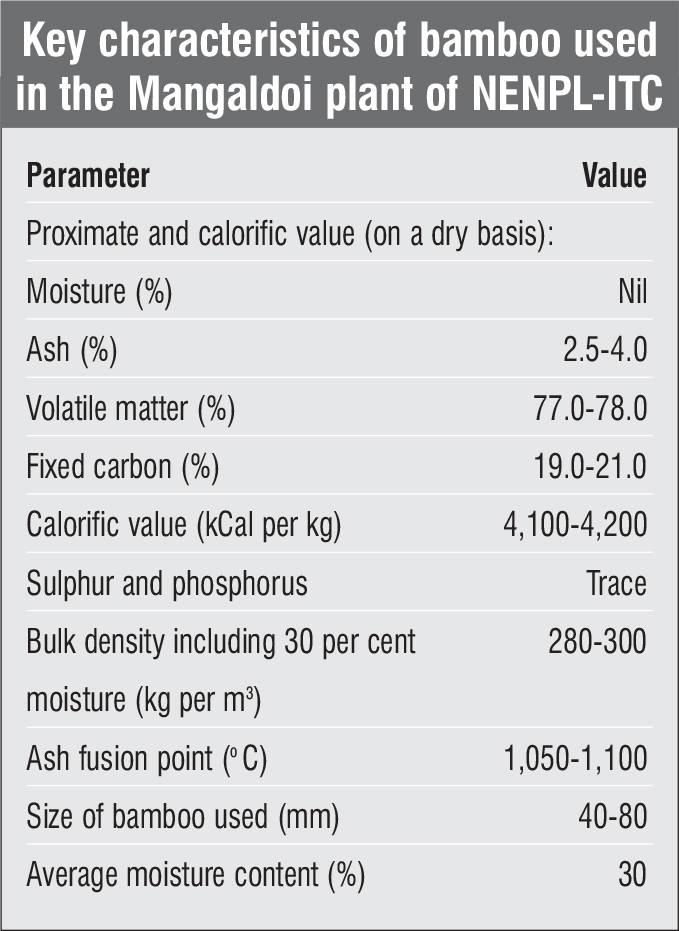 growing near the sea have high alkali content. Even in other cases, such as fruit shells, the alkali content may be high, resulting in lower ash fusion points. Another constraint faced during gasification pertains to the varying moisture content of biomass, which depends on the atmospheric equilibrium moisture content. The higher the moisture content, the lower the calorific value. Freshly cut wood contains 50-55 per cent moisture, some of which evaporates during storage. So, the final moisture content after long storage may not fall below 30 per cent. Similarly, freshly cut bamboo contains about 40 per cent moisture and after storage it quickly falls to around 30 per cent. The evaporation of moisture from bamboo has been found to be much quicker than that from wood. Therefore, the results of gasification, particularly gas generation, vary on a daily basis, depending on weather and atmospheric conditions.

Bamboo is a member of the Poaceae grass family and has immense potential as feedstock for biofuel production globally. As per bioresources.com, while many scientific studies on bamboo as a biofuel feedstock have been carried out in China and Japan, there is little research focused on tropical bamboo species. One study examined the potential of bioethanol production from two local bamboo species in China and found that the sugar content of the bamboo species is high at about 62 per cent of the dry matter. Malaysia is now expanding its forest plantation programme, and bamboo is one of the potential non-timber species selected for commercial plantation. While the utilisation of lignocellulosic materials from bamboo for other uses (such as for domestic household products and industrial applications from medicine to nutrition and from toys to aircraft production) has been well documented, a review of the research specific to bioenergy production from bamboo has not been presented to date. 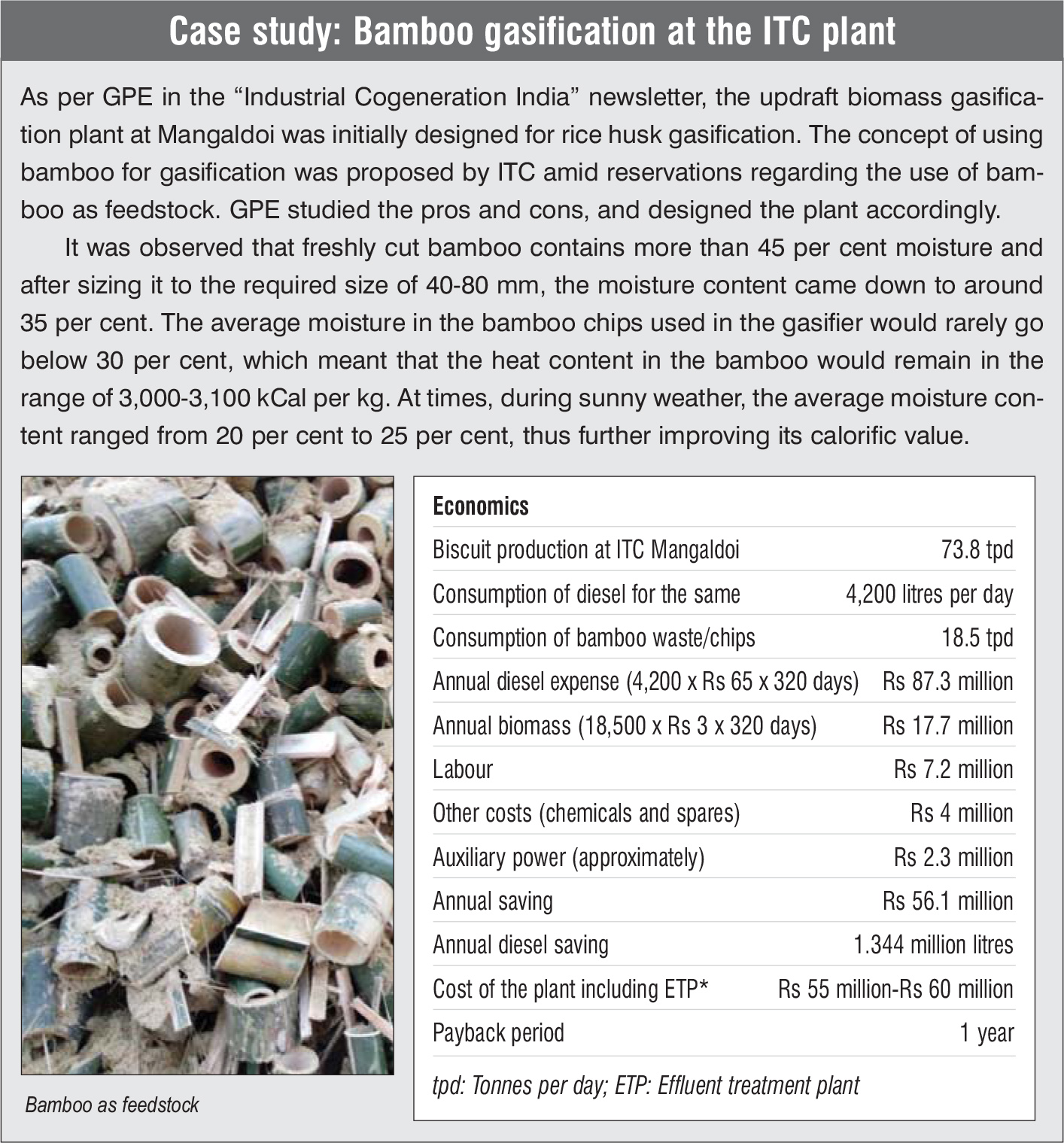 The GPE gasifier is based on fixed bed updraft technology, capable of gasifying different types of biomass such as rice husk, wood and woody materials, and agro-waste including bagasse, corn cobs, stalks of wheat and corn, bamboo and bamboo waste. Thus, it is a multifuel system designed to handle even low ash fusion point biomass like bamboo.

It is a continuous operating system, which can run on a 24×7 basis. The gas cleaning system attached to it is unique, with several stages of cleaning that can reduce particulate matter and tar content in gas substantially. 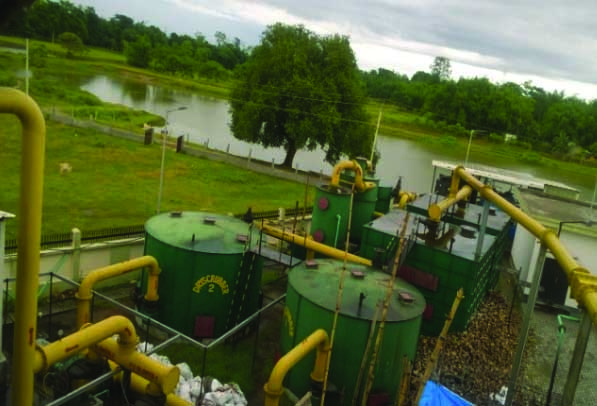 The heating value of gas can be consistently maintained at 1,250-1,350 kCal per Nm3. The GPE gasification system is fully automated, ensuring high efficiency operation with less manpower. These gasifiers can also be set up as stand-alone decentralised systems.

The plant at Mangaldoi was commissioned in June 2016 and has been in continuous operation since then. The efficiency of the gasification rate of bamboo was much higher than that of wood. Charcoal production in bamboo gasification was much lower (less than 1 per cent) as compared to wood gasification, with charcoal production as high as 5 per cent. The quantity of liquor (pyroligneous type) generated was 25-35 per cent of bamboo, depending on its moisture content, though it was slightly contaminated with tar. The liquor has to be treated before discharge to satisfy the Pollution Control Board norms. 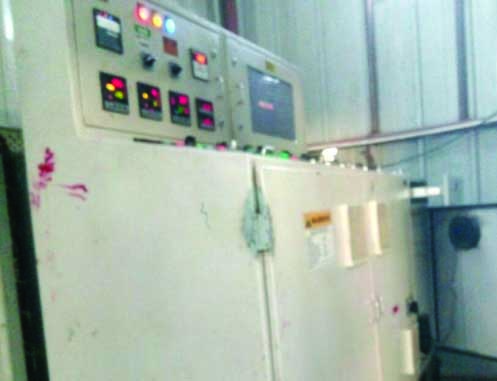 Thus, bamboo gasification, which was once considered problematic due to its low ash fusion point, was made viable in the GPE updraft gasifier. The actual bamboo consumption at 30 per cent moisture content was achieved at 4.5-5 kg per litre of diesel oil. The size and shape of the bamboo contributed to the efficiency of gasification. Introducing steam helped maintain an appropriate temperature in the gasifier and stabilise the gas flame in the burner.