With just 522 MW of installed renewable power capacity, the northern state of Haryana is lagging far behind its neighbours such as Rajasthan, Uttar Pradesh and Punjab. However, things are beginning to look up with the state authorities making concerted efforts to revamp Haryana’s renewables sector. The introduction of progressive policies has made the state a favourable destination among developers, and a number of projects, particularly in the solar space, are being set up. Renewable Watch highlights the key developments, growth trends and future outlook for the renewable energy sector in Haryana…

In terms of power supply, Haryana has a long history of performing fairly better than many other northern Indian states. It was one of the earliest states to be completely electrified, a feat achieved in 1970 as per discom records. According to the Central Electricity Authority (CEA), Haryana reported zero shortfall in meeting energy demand as well as peak power demand for the period April-September 2019, in line with past trends. The state discoms, Uttar Haryana Bijli Vitran Nigam Limited (UHBVNL) and Dakshin Haryana Bijli Vitran Nigam Limited (DHBVNL), have also been consistently trying to improve their performance. In fact, as per the Ministry of Power’s Seventh Annual Integrated Ratings for State Discoms, released in October 2019, both UHBVNL and DHBVNL have been ranked “A”, a marked improvement from the past year’s “B+” rating.

As per the Haryana Renewable Energy Development Agency (HAREDA), the discoms’ non-solar renewable purchase obligation (RPO) achievement was 3.19 per cent as against a target of 3 per cent in 2018-19. However, the discoms failed to comply with their solar RPO, achieving only 0.85 per cent as against a target of 4 per cent in 2018-19, since the share of solar power was just 2.14 per cent in the total installed power capacity, as of August 2019. In contrast, thermal power, from coal and natural gas, accounted for about 77 per cent of the total installed power capacity of Haryana (11,357.24 MW). With 1,966.52 MW of installed capacity, large hydropower had a share of 17.32 per cent, while with 242.78 MW of solar power, 205.66 MW of biomass power and 73.5 MW of small-hydro, renewable power had a share of less than 5 per cent in the total power capacity of the state. In fact, as Haryana authorities are increasingly focusing on renewable capacity enhancement through progressive policies and non-restrictive regulations, the energy mix of the state is likely to undergo significant transformation.

Although the current installed solar power capacity is less than 250 MW, Haryana has an extensive project pipeline across all solar segments. In July 2019, the Haryana Power Purchase Centre (HPPC) re-invited bids for the procurement of 300 MW of solar power, on behalf of UHBVNL. The procurement will be done under two categories, one for 240 MW and the other for the remaining 60 MW. Successful bidders will sign 25-year PPAs with HPPC. Earlier, in June 2019, Haryana Power Generation Company Limited (HPGCL) issued a tender for three grid-connected solar projects of a total capacity of 57 MW. The projects will be developed on a “build, operate, and transfer” basis. Of the total capacity, 12 MW will be developed at the Western Yamuna Canal (WYC) in Yamunanagar, 15 MW at the Deen Bandhu Chhotu Ram Thermal Power Plant, also in Yamunanagar, and 30 MW at the Faridabad Thermal Power Station. HPGCL will sign 25 year PPAs with successful bidders, and will supply power to HPPC as well as state discoms UHBVNL and DHBVNL.

In the same month, HPGCL issued a tender for the selection of an engineering, procurement, and construction (EPC) contractor for the development of 16 MW grid-connected solar power plants. Of the total capacity, 10 MW will be installed at Jhajjar and 6 MW at Faridabad. Prior to this, in December 2018, Solar Energy Corporation of India (SECI) and the South Delhi Municipal Corporation (SDMC) signed an MoU for the development of 27.5 MW of solar power plants in Delhi and Haryana. As part of the MoU, 25 MW of solar capacity will be installed at Najafgarh, in Delhi, and another 2.5 MW will be developed at Faridabad, in Haryana. The funds for the projects will be generated through public bonds, and the process for the same has already under way.

Haryana is a small and highly cultivated state, and developers of large ground-mounted solar projects often face land constraints due to this. However, the urban areas of the state have a large number of commercial and industrial enterprises as well as housing societies. All these establishments offer good potential for deploying large rooftop solar installations. In order to harness rooftop solar potential, the state authorities have set a target to deploy 1,600 MW of rooftop solar projects by 2022. While it is a tall target, it is achievable provided net metering regulations are strictly complied with. Consumers willing to install rooftop solar had initially faced issues in securing net metering approvals, however, these issues have now been resolved and the uptake of rooftop solar is expected to increase. A case in point is Gurgaon. The corporate hub has seen an increase in rooftop solar capacity installations from 25 MW in March 2018 to 40 MW in March 2019 on the back of support from discoms, consumers and the local administration. In addition, HPGCL is considering setting up 16 MW of canal-top solar projects at the WYC Hydro Power Station at Bhudkalan, in Yamuna Nagar. An expression of interest (EoI) was invited in January 2019 for the same. Another EoI was invited by HPGCL for a 10 MW floating solar project at the raw water reservoir of the Rajiv Gandhi Thermal Power Plant in Hisar. In October 2019, the Haryana government announced plans to install 468 grid-connected solar pumps of around 2.9 MW capacity in the state. These will be connected at 11 kV agricultural feeders in Karnal and Yamunanagar. It also intends to take up solar projects on gram panchayat lands.

At a time when most states are restricting power procurement through open access, Haryana has become a favourable destination for power producers. This has been made possible by the state authorities’ decision to re-introduce the waivers on wheeling charges, cross-subsidy charges, transmission and distribution charges, and additional surcharges in March 2019, for open access consumers of power from ground-mounted or rooftop solar projects. Enabled by this important policy change, developers have come out with plans to set up solar projects and supply power through open access to commercial and industrial (C&I) consumers. Already many of the bulk power consumers have switched to captive and open access solar projects from expensive grid power. For instance, Oberoi and Trident Hotels in Gurgaon started procuring solar power from a 7.5 MW captive project in Balasar to save operational costs. 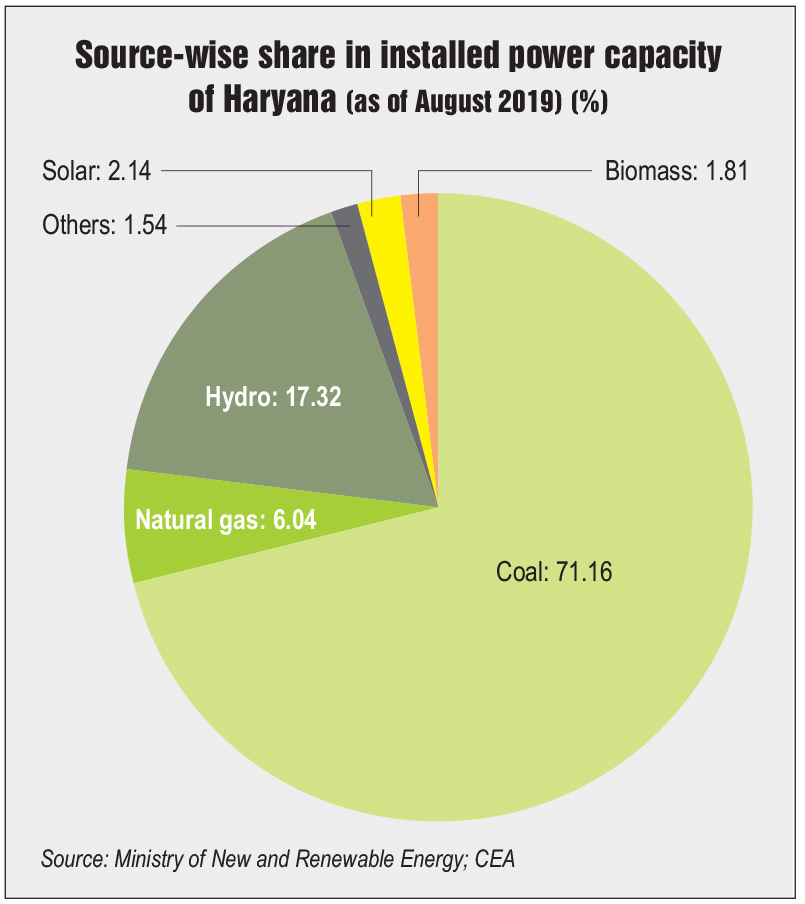 With several large ground-mounted projects in the pipeline, Haryana’s solar power sector is on an upward growth trajectory. Apart from solar power development, the Haryana government is focusing on waste-to-energy projects to serve the dual purpose of power generation as well as solid waste management (SWM). Integrated SWM projects are present in 15 clusters across the state, out of which three clusters are expected to have waste-to-energy projects. A 10 MW project is proposed at the Gurgaon-Faridabad cluster, a 5 MW project at Sonepat and another project at Panchkula. The authorities, meanwhile, have been making significant efforts to comply with their RPOs. To this end, HPPC has entered into a power sale agreement with SECI for the procurement of 400 MW of solar power and 590 MW of wind power.

Summing up, Haryana is poised for extensive solar power capacity addition supported by progressive policies and the willingness of local authorities. While the outlook is positive, it will be interesting to watch the solar power journey of the state that boasts of housing the headquarters of the International Solar Alliance.