Uttarakhand has an estimated hydropower potential of around 25 GW; however, only 4 GW has so far been brought online. Due to low resource utilisation and the state’s growing power needs, it ends up purchasing power, which costs Rs 10 billion to the state exchequer annually. The state-run Uttarakhand Jal Vidyut Nigam Limited (UJVNL) has been playing a key role in helping the state meet its power requirements. It was set up in 2001 the development of new hydropower projects, and the renovation, modernisation and upgradation of the existing hydropower plants in the state.

UJVNL currently operates 16 hydropower stations of different sizes with a combined capacity of 1,292 MW. This also includes some old hydropower plants up to 100 years old. By 2023-24, UJVNL is targeting to add another 220 MW of capacity. It plans to expand its renewable energy portfolio by adding solar- and bagasse-based cogeneration projects. The overall projected capex across all sources is expected to be about Rs 25 billion.

“In a very short span of time since the formation of the state, UJVNL has carved a place for itself in the power sector as a progressive and efficient operator,” says S.N. Verma, managing director, UJVNL.

The company owns 10 large hydropower stations of over 25 MW capacity each. Of this, the 304 MW Maneri Bhali II project, commissioned in 2008, is the largest. Last year, UJVNL operationalised the 3 MW Urgam project in Chamoli district. All its hydropower stations, except for Maneri Bhali I and II, Chibro, Khodri and Ramganga, are run-of-the-river stations and are thus highly dependent on water availability and the monsoon for electricity generation.

During 2018-19, UJVNL’s hydropower projects generated a total of 4,663.08 MUs. As of June 2019, electricity generation stood at 1,524 MUs, which is 300 MUs more than that in the corresponding period of the previous year. Three of its power stations – Maneri Bhali II (4 x 76 MW), Chilla (4 x 36 MW) and Chibro (4 x 60 MW) – account for around 61 per cent of the total generation. On the IT front, UJVNL is the first organisation in the state to have successfully implemented ERP technology. 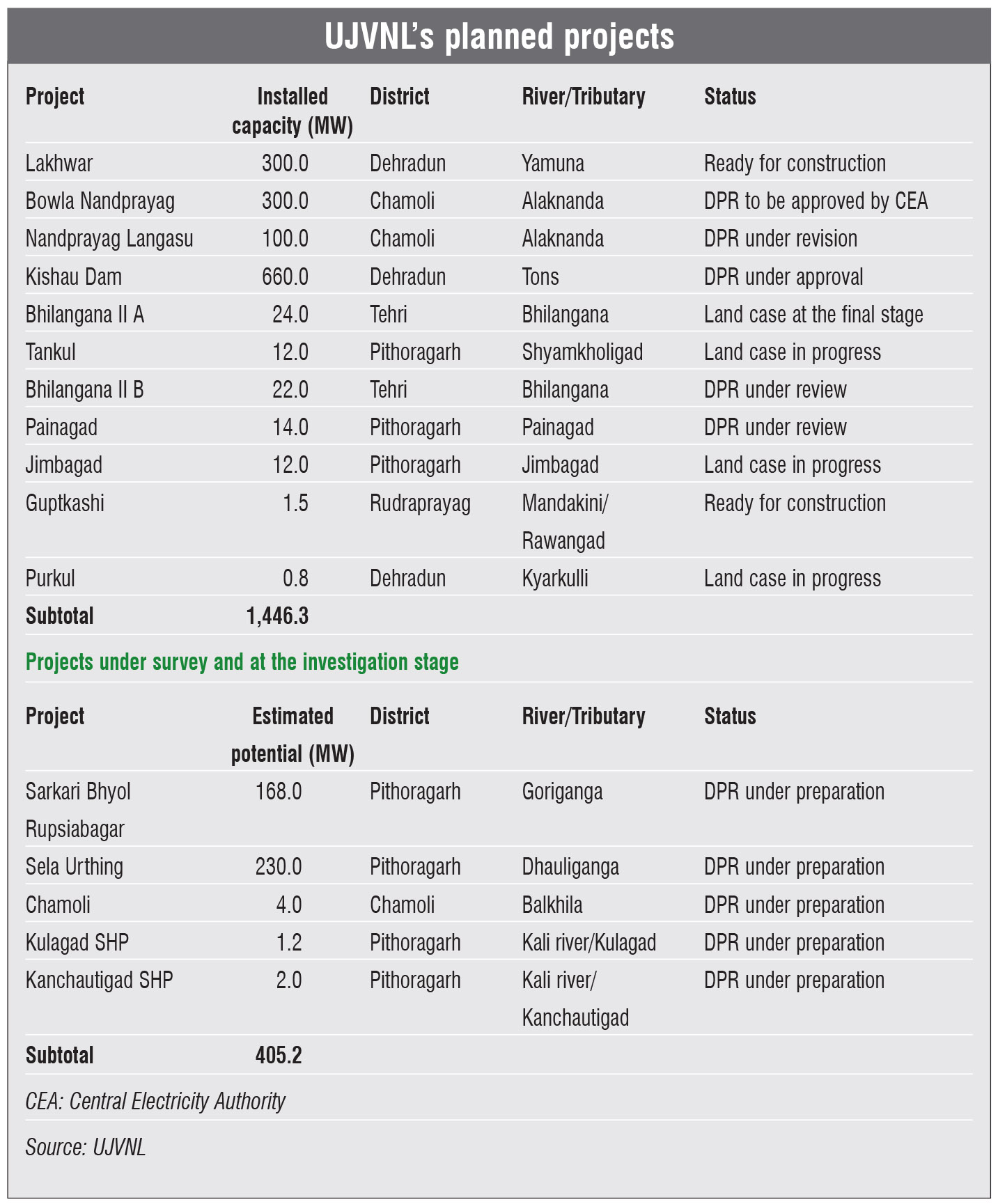 UJVNL has undertaken the construction of five projects with a combined capacity of 148.5 MW. Of these, one large hydroelectric project on the Vyasi river (120 MW) and three small hydroelectric projects – Kaliganga I (4 MW), Kaliganga II (4.5 MW) and Suringad II (5 MW) – are scheduled to be commissioned during 2019-20. The fifth project, the Madhmaheshwar (15 MW) SHP, is scheduled to be commissioned in 2020-21.

Apart from projects under construction, UJVNL has 16 hydro projects, which are at various stages of development. One of them is the 300 MW Lakhwar project. The project, with a proposed installation of three units of 100 MW, is expected to generate 612.93 MUs annually in a 90 per cent dependable year.

In 2018, an agreement was signed among six beneficiary states – Uttar Pradesh, Delhi, Rajasthan, Himachal Pradesh, Haryana and Uttarakhand – for water distribution from this project. The company is also undertaking the renovation, modernisation and uprating works for the Dhalipur (51 MW) and Tiloth (90 MW) projects. Last year, UJVNL completed the repair and maintenance works for the Dakpathar and Asan barrages with financial assistance from the World Bank under its Dam Rehabilitation and Improvement Project.

On the renewables front, UJVNL has commissioned 26 MW of solar projects in the state and it aims to set up another 100 MW solar power capacity in the near future. UJVNL is in the process of implementing two bagasse-based cogeneration projects – Nadehi (16 MW) and Bajpur (22 MW) – at a cost of Rs 1,150 million and Rs 1,545 million respectively.

Hydropower development is faced with a number of challenges. These have impacted developers like UJVNL. “Due to the decision of the National Ganga River Basin Authority in 2010, the Supreme Court’s decision dated August 13, 2013 and the Eco-Sensitive Zone Notification, 2012, around 34 hydropower projects of a total capacity of about 4,000 MW and costing approximately Rs 400 billion have been stalled in the state,” says Verma. Adding to the problems is the environmental flow notification by the Ministry of Water Resources that specifies the minimum levels of water flow that have to be maintained at various locations on the river. “The state is expected to suffer generation losses of 20-25 per cent because of this,” he adds. Besides, there are other bottlenecks such as geological surprises, resettlement and rehabilitation issues, land acquisition issues and natural disasters.

As the company navigates through these challenges, UJVNL’s long-standing experience in hydropower development in the state as well as a fairly large portfolio of under-construction and future projects will help in meeting the state’s future energy requirements. 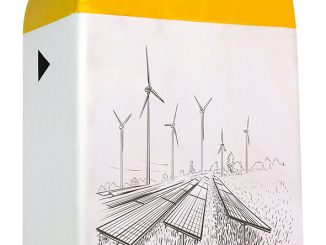 November 2020
Over the past decade, renewable energy financing has gone through various ups and downs depending on the investor sentiment. However, through all of t...
More 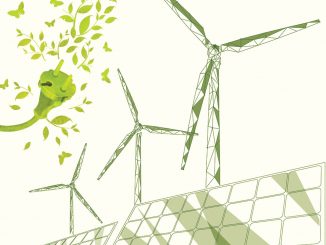 November 2020
Growth in installed capacity Renewable energy capacity has expanded significantly over the past decade. Starting out with about 56 GW of installed cap...
More