India’s ambitious renewable energy targets, strong climate change mitigation commitments and record capacity additions over the past two years have put it firmly on the global renewable energy map. Its position has been further strengthened with a steep decline in solar and wind power tariffs, making them among the lowest in the world. The quantum of capacity expected to be added over the next five years has generated significant interest and opened up the Indian market to international and domestic investors alike. Indian companies are collaborating with international agencies to facilitate growth and help the country achieve its targets.

According to the paper, the share of renewable energy in the country’s total power generation will increase to 18 per cent by 2030. As compared to 14 per cent in 2010, the increase seems modest. However, this is relative to the significant growth projected in power consumption patterns over the next decade. The share of installed renewable power capacity is likely to reach 60 per cent of the total capacity by 2030. This projection surpasses the capacity addition targets defined by the government and the country’s intended nationally determined contribution of 40 per cent by 2030.

The working paper projects the growth in solar power capacity installations to be about 196 GW by 2030, adding nearly 183 GW to the existing capacity of about 12 GW. This is based on the achievement of the government’s target of 100 GW by 2022. It is estimated that the solar capacity will grow by 1 GW per year until 2022 and 15 GW per year thereafter until 2030. The projected capacity accounts for 160 GW of utility-scale solar installations and 40 GW of grid-connected rooftop solar systems. Considering a capacity utilisation factor of 16 per cent to 19 per cent, the solar capacity is estimated to produce 350 TWh or 10 per cent of the country’s total power supply per year by 2030.

While the government is working to enhance the rooftop solar capacity, there has been little progress so far. It is estimated, however, that by 2030, about 40 per cent of buildings would have either a solar thermal or solar power unit installed. This is based on a series of assumptions and the extrapolation of estimates available for the rooftop solar system in New Delhi, powered by the net metering model, which has recently gained traction in the international market. New Delhi’s total rooftop area stands at 31 square km, which provides space for an estimated 2.5 GW of modules. Considering that about 1 per cent of the country’s population lives in the capital, the total rooftop potential can be calculated at 250 GW. Of this, it is assumed that 50 GW or 20 per cent will be realised by 2030. Further, about 20 per cent or 150 million square metres of residential and commercial solar thermal systems will be installed by 2030.

Apart from this, the paper expects a growth of 10 GW of concentrating solar power (CSP) plants during the period. This would require the installation of about 20-50 large CSP plants with 30 per cent efficiency by 2030. It is assumed that these plants will have little or no storage component due to its prohibitive cost. Moreover, power demand in India is partly for cooling systems, which require peak power generation during the afternoon, a pattern that aligns with the generation from CSP plants. With high solar radiation, Gujarat, Maharashtra, Jammu & Kashmir, Himachal Pradesh, Uttarakhand, Tamil Nadu, Karnataka and Andhra Pradesh are expected to be the ideal locations for the installation of these power plants.

Onshore wind power capacity is expected to increase to 145-187 GW by 2030. This is based on the achievement of the target of 60 GW by 2022 and continued growth during the rest of the period, calculated to be around 8 GW of addition per year from 2017. Over the past two years, the wind power segment in India has seen record capacity additions, indicating that there could be potential for further expansion of the annual incremental capacity, forming the basis of the assumption in IRENA’s study. The offshore wind power segment, which has zero capacity at present, is expected to register between 0.5 GW and 3 GW of capacity during the study period. About 13 per cent or 470 TWh of power is expected to be generated through wind energy by 2030.

The growth of biopower in India has been restricted in recent years owing to increased regulatory and market focus on other sources of renewable energy. IRENA expects a capacity addition of 4 GW from biomass through co-firing of biomass with coal-based power plants. It is assumed that in addition to the co-fired capacity, 1 per cent of all coal-based capacity (310 GW) will be converted to co-firing plants by 2030. Further, stand-alone solid biomass power plant capacity is likely to reach 18 GW during this period. India’s biomass potential stands at 23 GW at present – 18 GW from agriculture and forest residues, and 5 GW from energy crops. However, given the logistical and supply issues associated with energy crops, no capacity is likely to come online from this source. According to IRENA, the capacity of waste-to-energy plants is likely to reach 4 GW by 2030, based on the growth in population, positive government policies and the thrust on better waste management. Bagasse-based cogeneration is expected to add 4.6 GW to the existing capacity by 2030. While the efficiency of bagasse-based combined heat and power plants is expected to increase significantly, the diversion of raw materials for the production of biofuels  will affect generation from these plants. Another 4 GW is likely to be added through non-bagasse-fired plants by 2030. 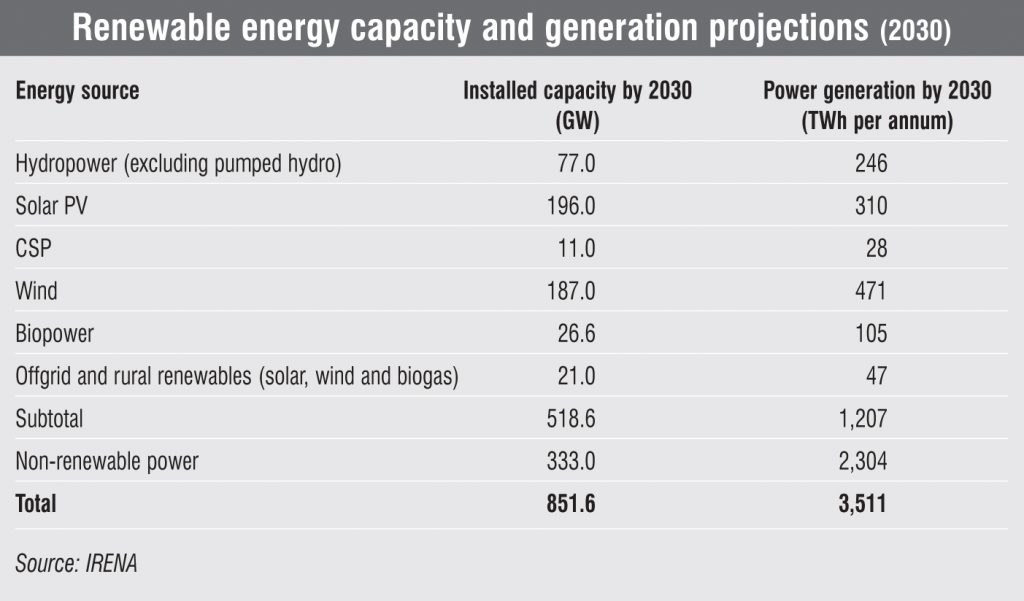 With the impending inclusion of hydropower under the purview of renewable energy, IRENA expects the total installed capacity in this segment to increase to 77 GW by 2030 (excluding pumped hydro), as opposed to about 44.5 GW (as of May 2017). IRENA projects small-hydropower capacity to be about 1 per cent of the total installed hydropower capacity during the period. Generation from these plants is likely to reach 246 TWh per annum. At present, about 11.7 GW of hydropower capacity is under development, while about 5 GW is stalled. IRENA’s assumption is that this capacity will come online over the next few years, and another 15 GW will be added by 2030.

The Indian renewable energy market has opened up fairly recently and is currently experiencing teething challenges as the market moves towards self-sustainability, driven by policy adjustments. Its growth over the next decade will see challenges pertaining to the mobility of investments, high upfront costs and revenue uncertainty fuelled in part by low tariffs, poor grid integration and the regulatory issues surrounding energy storage solutions. Further, IRENA expects policy-based issues in business environments, especially in the current federal and state structure of renewable energy development, power being a concurrent subject. Moreover, better technology at cheaper costs would need to be made available for decentralised energy production and storage solutions.

The actions required to achieve the intended national targets as well as the projections given by IRENA have already begun to take shape. Better enforcement of renewable purchase obligations, hassle-free land acquisition policies, priority-based financial lending for the sector and the setting up of green banks and funds along with greater renewable energy access are some of the recommendations made in the working paper. In addition, the creation of an enabling business environment for domestic and international companies to mitigate red-tapism and focus on project development while reducing risks is essential. Moreover, grid integration strategies and the use of innovative technologies will help improve power offtake and result in the overall development of the renewable energy sector to achieve the installed capacity levels as projected. 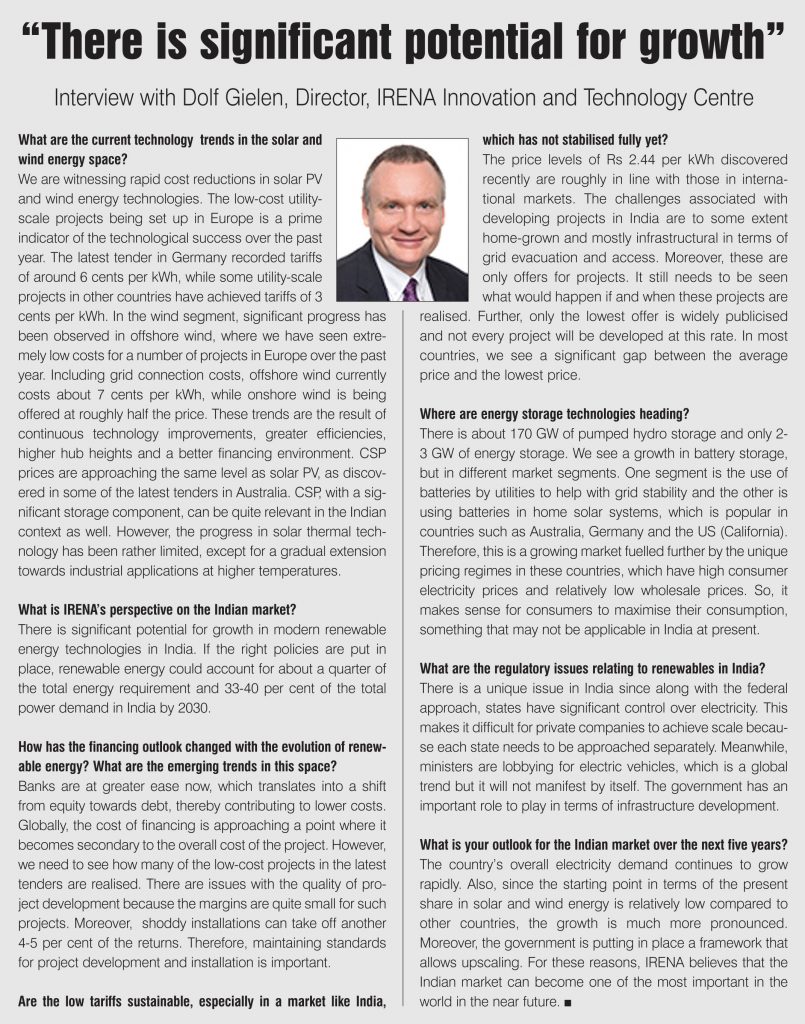 A Growing Market: Recent developments in the energy storage space

India has ambitious plans of setting up intermittent renewable energy projects. Energy storage systems are critical for integrating solar and wind power into the grid and supporting the power system. In line with this need, […]

Given its ambitious renewable energy targets and favourable business en­vironment, India has become a key destination for foreign investments. Ac­c­or­­ding to Renewable Watch Resear­ch, in the past five years, over 100 foreign inves­tment deals have […]

The rapidly growing solar market calls for a fast evolving solar inverter market. Inverters are an integral part of power generation through solar. The function of a solar inverter is to convert the direct current […]