In the past two years, the state of Madhya Pradesh has emerged as one of the most active in solar power development. The state authorities’ innovative models for promoting solar power uptake among public and institutional consumers as well as commercial and industrial (C&I) consumers and safeguarding stakeholders’ interests has made it a popular solar power destination. With new tenders having been announced recently and a large project capacity at the execution stage, the state is geared up for significant solar power capacity expansion in the near future. In this article, Renewable Watch highlights the recent developments, the future plans and the outlook for renewable energy in this sunny state…

Madhya Pradesh has been continuously striving to increase its power generation capacity in order to meet the state’s growing energy demand. In fact, the state’s installed power generation capacity has grown by 15.63 per cent between May 2018 and May 2019, to reach 23,498.84 MW as of today. Coal-based thermal power has a share of 64 per cent in the state’s total installed power capacity, the largest among all sources of power. In the renewables space, wind and solar power make up the majority of installed capacities of 2,519.89 MW and 1,992.25 MW respectively. Unlike other states, Madhya Pradesh has not witnessed an increase in its total renewable power share between May 2015 and May 2019. In fact, the share of wind power has dropped from 13 per cent during 2014-15 to 11 per cent during 2019-20, as no significant capacity addition has taken place in the wind space. However, the share of solar power has increased significantly from a mere 3 per cent during 2014-15 to 9 per cent during 2019-20. In energy terms also the share of solar increased by 31 per cent between 2017-18 and 2018-19, although coal dominates the state’s electricity generation mix.

Madhya Pradesh receives a high level of solar irradiation of over 5.5 kWh per square meters per day with around 300 days of clear sun. Combined with proper bidding structures and policy frameworks, the state is an attractive destination for solar projects and has many large projects in the pipeline. The state’s first large solar park, the Rewa Ultra Mega Solar Park, is nearing completion, with 730 MW out of the total 750 MW already commissioned. The remaining capacity is scheduled to be commissioned soon. The solar park is being implemented by Rewa Ultra Mega Solar Limited (RUMSL), a joint venture of the state government-owned Madhya Pradesh Urja Vikas Nigam Limited (MPUVNL) and the Solar Energy Corporation of India (SECI). The implementation of the Rewa Solar Park is an important milestone in India’s solar power sector for several reasons. The solar park started supplying power to the Delhi Metro Rail Corporation (DMRC) in April 2019 through the open access route. As part of mutual agreements, the DMRC is procuring 99 MW (345 MUs) from the Rewa Solar Park while the state discom is buying the rest. Through this landmark deal, Madhya Pradesh has become the first state to have successfully undertaken an interstate solar open access transaction of such a large magnitude with another state’s commercial consumer.

The Rewa auction was also the first such successful bid on a large scale. The auction for the solar park in February 2017 witnessed the lowest solar power tariffs until then, with winning bids of Rs 2.97 per unit. Projects of 250 MW capacity each were awarded to Mahindra Renewables, Acme Solar Holdings and Actis LLP’s Solenergi Power. The solar park got soft debt for all the three developers from the World Bank’s financial arm, the International Finance Corporation (IFC) and additional financial support from the Indian Renewable Energy Development Agency (IREDA). In addition, the solar park had provisions for a three-tier payment security mechanism to safeguard the developers from payment defaults. This innovative mechanism consisted of a letter of credit, a state guarantee, and a payment security fund formed solely for this solar park with low interest loans from IREDA. The payment security mechanism combined with the cheap funds raised developers’ confidence and helped in the achievement of such low tariffs.

Similar to the utility-scale space, the rooftop solar segment in Madhya Pradesh has witnessed an encouraging response from developers and investors alike. Although the state has only 123 MW of installed rooftop capacity as per Bridge to India, this is likely to increase significantly in the near future enabled by successive tenders. In August 2018, MPUVNL’s tender for developing 35 MW of grid-connected rooftop solar capacity under the renewable energy service company (RESCO) model saw bids as low as Rs 1.58 per unit. This was the lowest tariff discovered in the country until then for a rooftop solar project and the tender was oversubscribed by over 630 per cent. While Rs 1.58 per unit was the lowest tariff for central government buildings, tariffs were higher for other institutions. The tariffs quoted in this bid are set to escalate by 3 per cent every year over a period of 25 years. Under this tender, various government colleges, police establishments, municipal corporations and private entities in the state were covered. 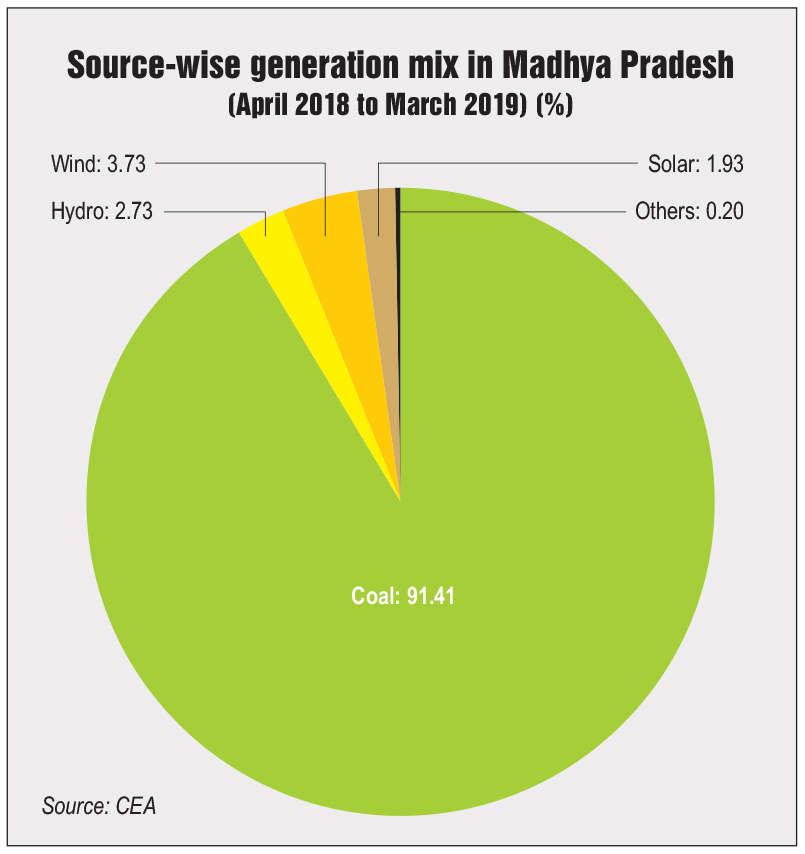 The lowest tariff recorded for rooftop solar was soon surpassed when MPUVNL achieved a historically low tariff of Rs 1.38 per unit in October 2018 as part of its RESCO II rooftop solar tender. Projects of a total capacity of 8.6 MW were tendered to be set up at 13 different locations across the state. While Rs 1.38 was the lowest tariff for central government buildings, Rs 1.63 was the lowest for state government medical colleges. There were certain common features in both these RESCO tender frameworks that helped achieve such low tariffs. The projects under the tenders were categorised based on consumer type for more effective bidding. All the projects were eligible for subsidies, as high as 48 per cent in some cases, and developers could get low interest loans from agencies such as the World Bank and IREDA. Building identification as well as preliminary engineering design work were done first to make matters simpler for bidders. A first-of-its-kind data room with site-specific information was also set up with the help of the World Bank.

Following the successful response in the previous tenders, MPUVNL issued another tender for the implementation of 25 MW of grid-connected rooftop solar projects in February 2019. However, unlike the previous tenders that were targeted at public and institutional consumers, the new tender is focused on selling power to industries in Mandideep in Raisen district and Pilukhedi in Rajgarh district as well as other industrial areas. The total capacity was later increased to 32 MW, and the upper ceiling tariff was fixed at Rs 5.50 per unit for the first year. The tariffs are expected to be higher than the previous tenders due to the absence of subsidy. However, the World Bank with the help of the State Bank of India, and the Asian Development Bank through the Punjab National Bank will provide concessional loans to developers. This along  with payment security mechanisms is expected to mitigate developer risks and help in the discovery of low tariffs. 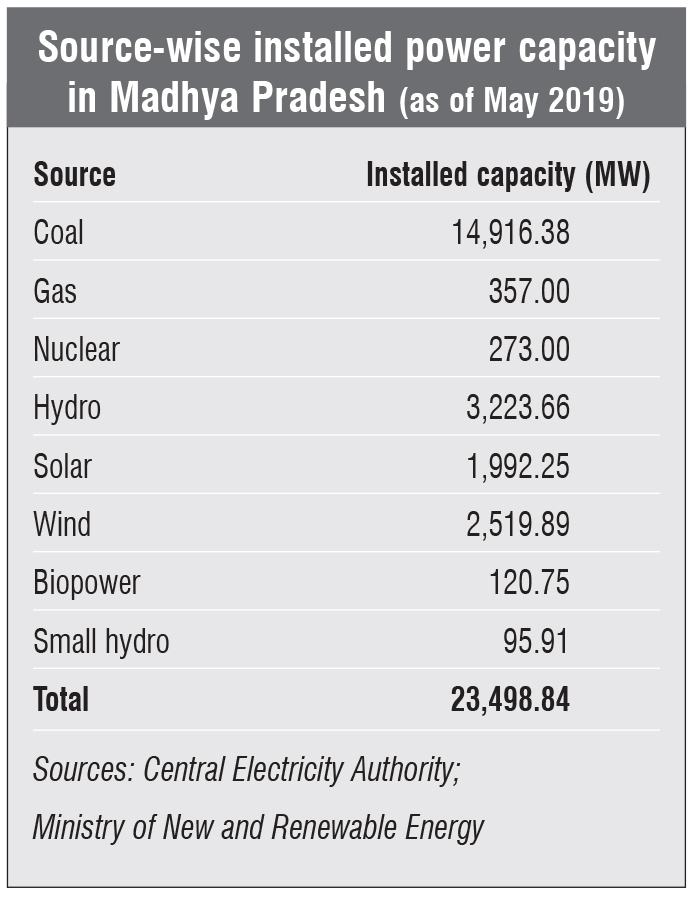 Apart from solar parks and rooftop projects, the state authorities are actively promoting other renewable energy options such as floating solar, waste-to-energy (WtE) and solar pumps to decrease dependence on polluting thermal power. To this end, in July 2019, NHDC Limited, a joint venture between NHPC and the Madhya Pradesh government, invited bids for the selection of an engineering, procurement and construction contractor for developing 25 MW of floating solar power projects in the state. The scope of work includes the design, engineering, comprehensive operations and maintenance for a period of five years, procurement, and construction of two floating solar power projects of 13 MW and 12 MW at the Omkareshwar reservoir in Khandwa district. The projects are expected to be completed in 12 months at a total estimated cost of Rs 1.29 billion. Discussions are also under way to implement large floating solar projects at the Indira Sagar reservoir on the Narmada river. This reservoir is expected to have a potential to accommodate over 10 GW of solar capacity.

For utilising municipal solid waste in an effective manner, the Madhya Pradesh urban local bodies are considering setting up WtE plants at various locations across the state. An 11.5 MW WtE project is already operational in Jabalpur and preliminary work has started in some other cities as well.

The state has also installed 14,000 solar pumps till date, all of which are enabled with remote monitoring systems. It has a larger programme in the pipeline which aims to install close to 200,000 pumps. The state authorities are considering a slightly different subsidy approach than the one proposed in the Kisan Urja Suraksha evam Utthaan Mahabhiyan (KUSUM). As per sources, the state is exploring the possibility of limiting a farmer’s contribution to only 10-15 per cent of the total pump cost, instead of the 30-40 per cent as indicated in KUSUM. This will make solar pumps more affordable for farmers and help in increasing their uptake.

Realising the importance of energy storage systems for effective integration of renewable energy into the grid, Madhya Pradesh Power Management Company Limited has issued an expression of interest (EoI) inviting energy storage companies for setting up a 500 MW project in the state. While the EoI does not prefer any storage technology, it specifies a discharge time of three hours. It also mentions a preference for technologies with proven experience and cost as well as performance benefits.

Despite the Ujwal Discom Assurance Yojana (UDAY), the health of state discoms has not improved much over the past few years, and they are still suffering from high revenue losses. Thus, low-cost renewable energy uptake assumes significant importance in the state’s future plans. Decentralised solar in the form of rooftop solar and solar pumps will further help in reducing distribution losses and easing discoms’ burden. To this end, with one solar park almost ready for commissioning and three more at the bidding stage along with a slew of large rooftop solar projects, Madhya Pradesh has an extensive solar power project pipeline. The state authorities are making efforts to make solar power accessible for everyone, right from farmers to discoms to public and private consumers. While solar power is gaining traction, wind power has not picked up pace as Madhya Pradesh has low wind sites. However, the state agencies are hopeful that once the majority of high wind sites in the rest of the country are utilised, developers would turn to Madhya Pradesh. As land constraints are a major bottleneck in solar power development, the state authorities are exploring floating solar and also trying to identify suitable land banks in the ravines of the Chambal river valley. Although there has been no significant activity on the policy and regulatory front in recent months, the innovative business models and bidding structures adopted by Madhya Pradesh present a positive outlook.

Summing up, in the current scenario of aggressive competition for low tariffs and capacity additions across states, Madhya Pradesh provides many innovative scalable investment models for the renewable power industry.