ReNew Power, established in 2011, commenced operations with a 25.2 MW wind power project in Jasdan, Gujarat. Since then the company has grown rapidly, backed by strong investors, and has emerged as one of India’s largest independent power producers (IPPs) in the renewable energy domain. A series of acquisitions and active participation in renewable energy tenders have taken ReNew Power’s total portfolio to over 7 GW, comprising both wind and solar power assets. For further diversification of its portfolio, the company is now making a foray into other emerging renewable energy segments, energy storage as well as transmission.

As an IPP, ReNew Power develops, owns, builds and operates utility-scale wind and solar energy projects. Like many other large IPPs, ReNew Power has also entered the distributed solar energy segment and supplies solar power to commercial and industrial customers. The company has a renewable asset base of over 7 GW, of which roughly 4.7 GW is operational as of July 2019. It owns and operates more than 100 utility-scale projects spread across eight states, with 3,045 MW and 1,700 MW of capacity operational in the wind and solar domains respectively. The company also has an extensive project pipeline with roughly 1,500 MW of wind and 800 MW of solar projects under execution. Apart from these utility-scale projects, ReNew Power has over 250 distributed solar installation sites spread across more than 17 states.

Strongly committed to capacity expansion, ReNew Power has been bidding for projects, both wind and solar, in various auctions. Recently, in May 2019, it won 300 MW of capacity in the Solar Energy Corporation of India’s (SECI) 1,200 MW solar auction, 50 MW in SECI’s 400 MW wind auction and 120 MW in SECI’s 1,200 MW solar-wind hybrid auction. The company won close to 2 GW of project capacity between January 2019 and July 2019 across the solar, wind and hybrid segments. Apart from solar-wind hybrids, ReNew Power is considering extensive investments in another emerging area – floating solar. The company recently won the right to develop a 100 MW floating solar project on the Rihand dam in Uttar Pradesh, and sell power to Uttar Pradesh Power Corporation Limited at a tariff of Rs 3.36 per unit. Prior to this, in October 2018, it won the tender for developing a 3 MW floating solar project at the Meghadrigedda reservoir in Visakhapatnam, Andhra Pradesh. According to sources, ReNew Power is also exploring development opportunities in the transmission space and has started bidding for projects under the Green Energy Corridors project.

Along with bidding for large capacities, ReNew Power engages in frequent acquisitions as part of its business strategy in order to stay ahead in the game. The company made a series of acquisitions in late 2017 and early 2018. To begin with, it acquired the assets of the Vikram Solar Group with a portfolio of 30 MW. Then, it acquired 100 per cent stake in KCT Renewable Energy Private Limited for over Rs 10 billion, taking ownership of the latter’s three fully operational wind power projects in Andhra Pradesh with a combined capacity of 103 MW. It also acquired Ostro Energy Private Limited’s large portfolio of 1,100 MW for a value of about Rs 102 billion. Following this, ReNew Power acquired 100 per cent stake in Indian Energy Limited at a price of Rs 364 million for a total wind power capacity of 41.3 MW. In April 2019, it acquired two of Suzlon’s solar assets totalling 30 MW for Rs 297.3 million and is reportedly exploring more such deals in the future. 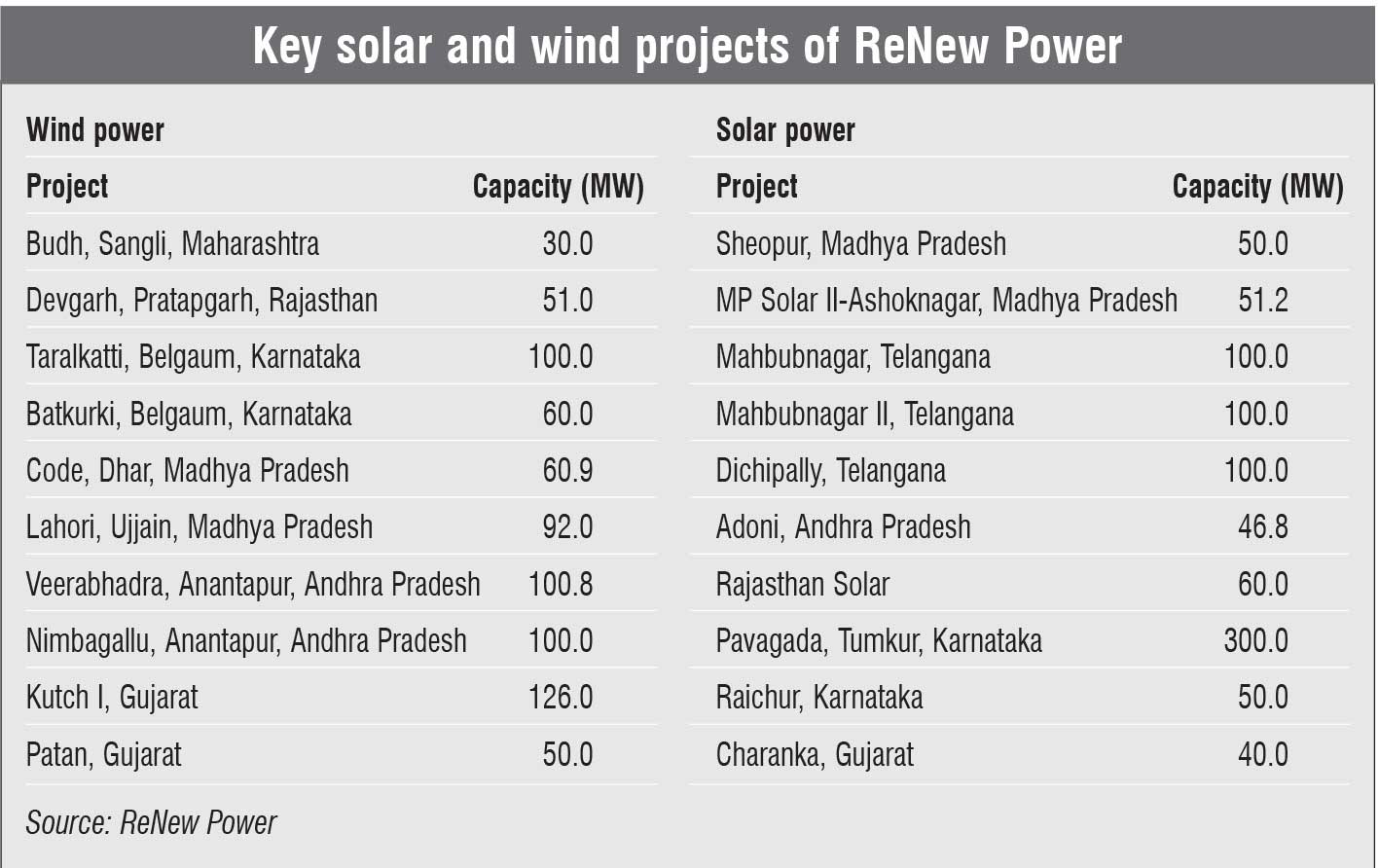 ReNew Power began its journey with an initial equity investment of $60 million from Goldman Sachs in 2011 and is now backed by marquee investors from across the globe such as Goldman Sachs, the Abu Dhabi Investment Authority (ADIA), JERA, the Global Environment Fund (GEF), and the Canadian Pension Plan Investment Board (CPPIB). After initial rounds of equity funding from Goldman Sachs between 2011 and 2013, the company received significant equity investments from other major international investors such as the Asian Development Bank (ADB) and Green Rock, besides ADIA, GEF and JERA, for its expansion plans between 2014 and 2017.

ReNew Power has continued to raise substantial funds through a combination of equity and debt financing, and bond issues. In February 2017, the company announced a long-term debt financing of $390 million from ADB for capacity expansion in Andhra Pradesh, Gujarat, Jharkhand, Karnataka, Madhya Pradesh and Telangana. In September 2017, it raised $50 million from Yes Bank to refinance the debt of a wind power project in Madhya Pradesh. In the same year, ReNew Power raised $475 million by selling green bonds to overseas investors to refinance debt. In January 2018, the company raised $352 million to fund its expansion plans and repay loans through non-convertible debentures (NCDs) issued in two parts. Of the total, $232 million was raised through a multi-issuer cross-collateralised rupee bond and $120 million was raised through a credit-enhanced NCD. In February 2018, CPPIB acquired 6.3 per cent stake in the company from ADB for $144 million and again invested $247 million in April 2018 to support ReNew Power’s acquisition of Ostro. By November 2018, CPPIB’s share in the company increased to 16.2 per cent, with Goldman Sachs and ADIA being the other major shareholders. Around the same time, ReNew Power also reportedly had plans to launch its initial public offering, but this was postponed due to market uncertainties, following which the company decided to raise funds through other means.

To this end, ReNew Power raised more than $1 billion between February and July 2019. In February 2019, it received an additional debt financing of about $350 million from the Overseas Private Investment Corporation for the construction of wind and solar power plants in the country. In March 2019, ReNew Power raised $375 million through a green bond issue. In July 2019, the company raised $300 million through a rights issue. Goldman Sachs, ADIA and CPPIB subscribed to the issue with each of the shareholders infusing $100 million. The recent round of investments will help the company meet its capital requirements for upcoming projects.

The company has a strong track record of organic and inorganic growth, and is continuing to bid strongly as well as explore various acquisition opportunities. It has nearly doubled its operational capacity in each of the last three financial years aided by a healthy stream of investment flows. However, the company needs significant debt to fund future capacity additions and thus, its financial leverage remains high. Also, for the majority of its assets, ReNew Power has power purchase agreements (PPAs) with state discoms, which may involve delayed payments and impact revenues. Moreover, the company has an extensive project pipeline, which could be subject to policy uncertainties. For these reasons, S&P Global Ratings assigned BB long-term issuer credit rating to ReNew Power in May 2019.

Despite these challenges, ReNew Power’s future outlook continues to be positive as the company has a strong and diversified operational portfolio of solar and wind assets with long-term PPAs generating assured returns. The projects are geographically well distributed, lowering resource related and counterparty risks. In addition, to safeguard itself from future risks, ReNew Power is diversifying its business and has forayed into the transmission, solar-wind hybrid and floating solar segments with significant capacity additions in the distributed solar space. The company’s debt position is likely to improve once the projects under implementation are commissioned and start generating revenues, though this will depend on the timely and streamlined execution of upcoming projects. However, ReNew Power has a strong group of supporting investors, which give it financial flexibility and helps it maintain a healthy liquidity profile.

In sum, with the right financial support and an extensive diversified portfolio of operational and upcoming projects, ReNew Power seems geared up for incremental growth.