Nestled in the Garhwal Himalayas at an altitude of around 7,700 feet, a small off-grid eco resort is using solar power to meet its minimal power requirements. The Goat Village, located in Nag Tibba, Uttarakhand, uses a small solar plant for powering its kitchen and heating water. The living spaces are unelectrified and guests use solar lamps, providing a truly sustainable living experience. CGH Earth’s Spice Village in Thekkady, Kerala, is another such eco retreat. The large luxurious property located in the Periyar National Park has 52 cottages and meets 75 per cent of its power requirements through an on-site solar power plant. It is not just small resorts that are going green, but large hotel conglomerates, also are increasingly turning to renewables to supplement grid electricity and meet their power needs. This is helping them lower their power bills while creating a greener image for the hospitality industry.

With domestic travel growing, both for business and leisure, and India becoming an attractive international tourist destination, there is a spurt in the number of hotels being set up. Moreover, the hospitality business is no more a seasonal business; hotels receive normal to heavy traffic throughout the year. Thus, they have to keep their power-consuming apparatus switched on even if there is lower occupancy. As a result, power consumption by the hospitality industry is on the rise. Air conditioners account for the majority of the power requirements as Indian hotels need round-the-year air conditioning due to a subtropical climate. Water heating and lighting needs followed by cooking, office equipment and refrigeration are the other major power-consuming applications in a hotel. In fact, power costs account for 8-10 per cent of the operating expenses of an average Indian hotel. These costs are only expected to increase in the future.

To safeguard their revenues and profit margins from these high operating expenses, several hotels have switched to renewables-based applications in order to meet part or most of their energy requirements. A 2018 study by Cox & Kings, a popular travel agency, shows a rising demand for eco-friendly accommodation by young Indian travellers, another reason why hotel companies are increasingly deploying renewable energy systems on premises. As per the study, 89 per cent of the respondents agreed to have chosen their accommodation after researching its sustainable practices. These travellers prefer hotels that use renewable energy, have waste and water treatment facilities, conserve energy and make efforts towards minimising their carbon footprint. Similar studies have found a demand for an eco-friendly or sustainability filter on booking sites. Thus, the growing consciousness among urban youth regarding the global climate change problem has made many hotels adopt energy conservation practices so as to attract guests. The concept of ecotourism has emerged in recent years, and new resorts with renewable power set-ups, waste management facilities, biofuel production systems and solar water heating units are coming up rapidly. 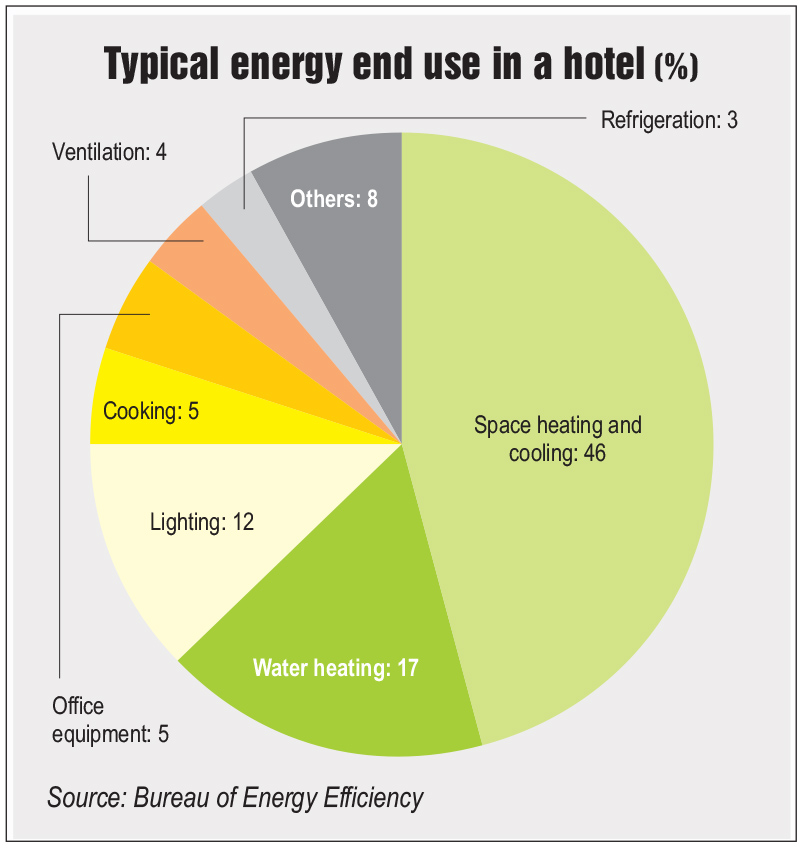 Most large hotels depend on solar thermal systems for meeting their water heating requirements as hot water is required not only in bathrooms but also for kitchen and laundry purposes, which has huge energy implications. For instance, ITC Maurya in New Delhi has installed solar thermal systems, Arun Dishes, for cooking, generating steam for laundry, and other heating requirements. Other hotels like Trident in Jaipur, Apple Country Resort in Manali and Gateway Hotel in Bengaluru have set up large solar flat plate collector-based water heaters with a capacity of 2,200, 10,000 and 15,000 litres per day respectively.

Hotels like Le Méridien in New Delhi, Accor Hotels’ Ibis in Gurugram, and Hilton Shillim in Pune have installed rooftop solar plants for captive power consumption on their own premises. Due to the rising power prices, the hospitality industry is also resorting to captive off-site and open access power procurement of renewable energy to lower their operating expenses. Recently, the Oberoi Group’s Gurugram properties, Trident and Oberoi, switched to renewables and started procuring solar power from a 7.5 MW captive solar plant in Balasar, Haryana. Two large hotels in Jaipur, Le Méridien Resort & Spa and Hilton, source solar power through open access from 1.3 MWp and 2 MWp solar parks, respectively located in Gajner, Rajasthan. The hotels save roughly 1.5 MUs and 2 MUs of energy per month respectively, leading to significant reductions in their power bills.

In the southern part of the country, wind power is the preferred renewable energy source for the hospitality industry, with many large hotels procuring huge quantities of cheap wind power through the open access or captive route. For instance, ITC Grand Chola in Chennai gets most of its power from a captive wind power plant in Coimbatore. The hotel also produces biodiesel from organic waste to power its heat pumps and boilers. ITC’s other properties like ITC Maratha in Mumbai, and ITC Windsor and Royal Gardenia in Bengaluru meet almost their entire power consumption through captive wind farms. Other major hotels like the Leela Palace in Bengaluru, Oberoi in Bengaluru, Residency Towers in Chennai and Taj Coromandel in Chennai also procure significant wind power capacity. In fact, Vivanta by Taj in Coimbatore meets more than 80 per cent of its total power requirements through wind power. 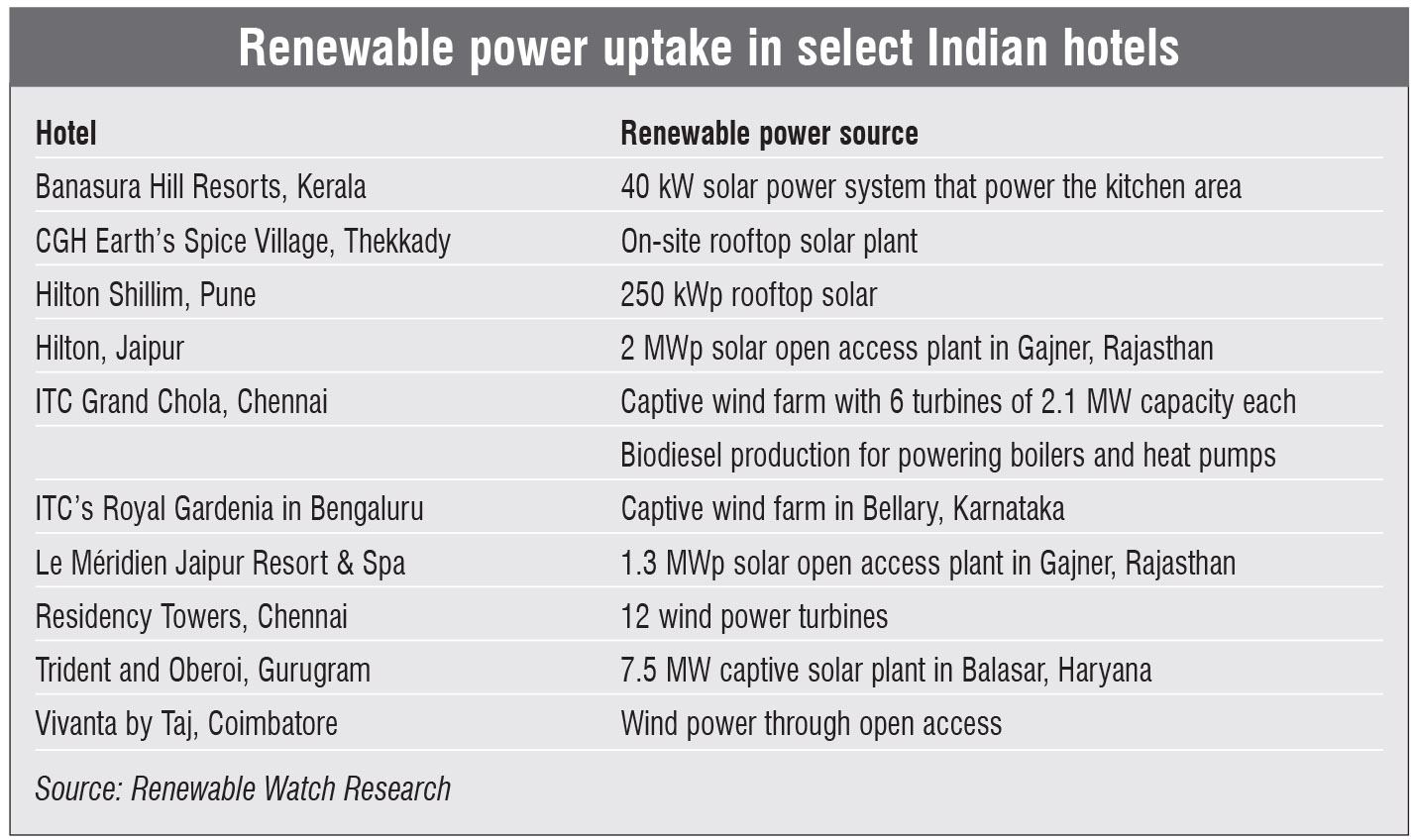 As of today, ITC Limited’s hotels in total meet more than 58 per cent of their electricity requirements through renewable energy sources such as wind and solar. In 2017-18, Indian Hotels Company Limited, with its flagship brand, Taj, met 21.75 per cent of the total energy consumption of 60 hotels through renewable energy sources. Both ITC Limited and Indian Hotels Company Limited are expanding their solar and wind energy footprint. Other large hotel chains like Marriott International and Hyatt Hotels Corporation are also exploring renewable energy solutions as part of their corporate strategy. In fact, Mahindra Holidays & Resorts India Limited has committed to join RE 100, a global renewable energy campaign led by The Climate Group. It has also set a target to power 100 per cent of its global operations with renewable electricity by 2050.

Renewable energy is expected to form a major part of the corporate strategy of hospitality companies as they strive to cut their operating costs and attract environmentally conscious youth travellers. In fact, hospitality is expected to emerge as a key stand-alone business segment for solar and wind power developers, and operations and maintenance service providers, leading to the development of innovative business models. Renewable integration with the use of energy storage systems may gain prominence in this space as quality and uninterrupted power is of utmost importance for hotels. Going forward, it will be interesting to see how renewable energy systems transform the hotel and hospitality landscape of the country.